The pandemic has been raging for more than 400 days, and you might not be far off the mark to think that I  have posted 300 car breakfasts or coffees. But that would be an exaggeration as I am pretty sure there have been no more than 129 such outings.

This would then be #129. As with the others, it is courtesy of Sue's phone which she can trigger from her watch. 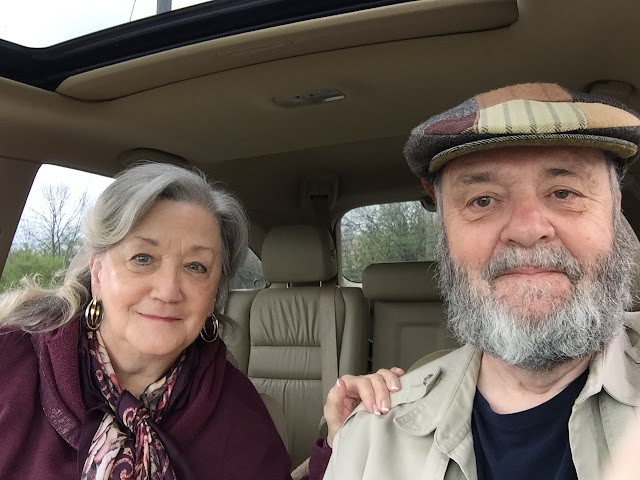 I think I am going to have to deal with the beard. Some people can grow long; others can't. Like head hair, how it grows, or doesn't in my case, determines what you can do with it. I couldn't grow my hair long, even back in the hippie days, because it just turned up in a flip at the back. The beard does something similar under my chin, and the sides stray out even though they have been trimmed.

When we came home, it was time to do more selfies this time with new masks. Sue wanted a new one, a white and bright one, for summer. I donned my maple leaf mask. I hadn't been wearing it because it was the kind with two elastics rather than one which fit over the ears. While I am given to understand that the two-elastic type offer better protection, they are cumbersome to use, so I wasn't bothering with it. Sue converted it to a single over-the-ear type. I'm glad to wear it because I like it. I feel very Canadian wearing a read maple leaf, especially one with a moose in it. 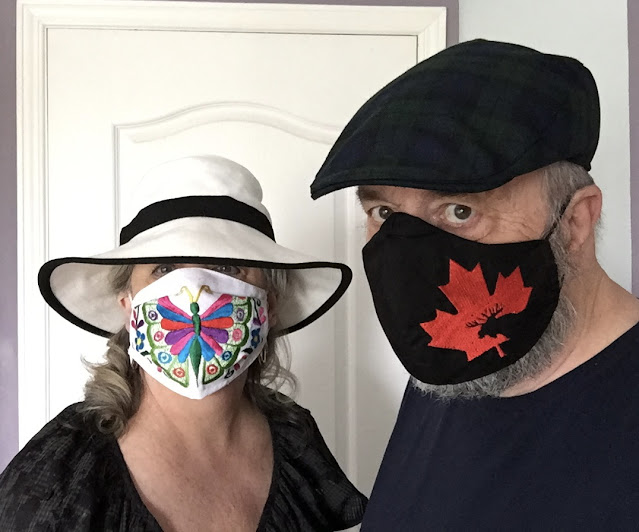 Also of note is that Sue (above) is wearing her new Tilley hat, also specifically for summer. It is lighter for summer wear, and also looks snazzier that her old one in the following photo in which we are both wearing brand new masks. Mine is called Howling Wolf. I recently promised yall a photo of my tartan ensemble. All three items were purchased separately without matching in mind, but they do match fairly well. I have never actually worn all three simultaneously, but I used to wear the mask and cap out shopping, and I very often got nods and/or comments and even a thumbs-up from a complete stranger. I haven't worn it for a long time because it is single layer. My others have two layers plus a pocket for a filter, so those are what I wear now. 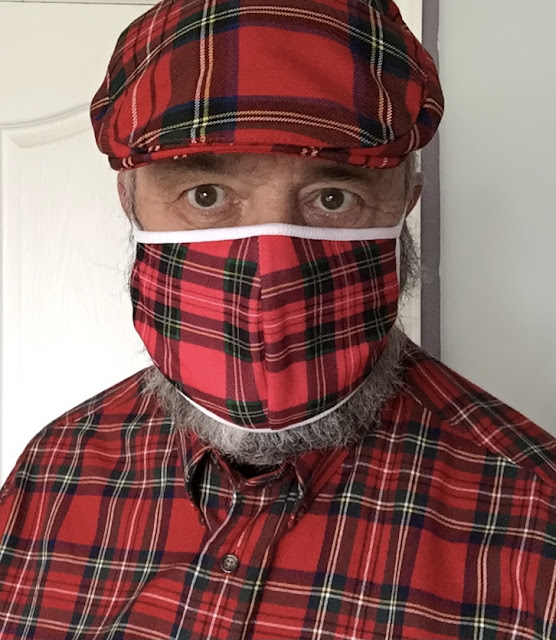 Who ever thought that masks would become part of our fashion considerations? But we gotta have some fun in these times.

Fashionistas! I really like Sue's summer mask & hat. Your tartan look would work well at the Fergus Highland games, alas cancelled yet again for in person festivities.

Please do share where Sue got her masks! I am sure my sore vaccinated arm can lift to click!

Sue's summer mask is a winner. And I love Tilleys. I have one that is my gardening hat and cannot be seen in public.

Masks! I wear two hearing aids and glasses and when you add a mask, the result can be expensive. In a rainstorm last week, I pulled my mask off while returning my cart to the corral and pulled off a hearing aid. Did not realize this for a bit and by the time I returned to the parking lot and did find the hearing aid, it had been both drowned and run over. Replacement is covered by insurance but still will cost me a packet. Sob.

You do look good in plaid.

I notice most women in the news spotlight have coordinating masks with their ensembles. None of my masks really match what I wear. Daughter made them and they're colorful at least.

In the news for Canada was that Pfizer shot ok for youths. Looks like your grand kids will get it soon.

@MG. I did that once. Not with a mask, but I removed my HAid while I was reading in the grass. By the time that I found it, I had stepped on it. My insurance did not cover.

Those are some fine masks!

Wonderful hats and masks. And beard with masks seem to me they'd be uncomfortable, but I see them all over the place, even a nurse in our Emergency Dept. I just wear the paper ones I purchased, and hope by the time I go through all of them I won't have to get more...but I have ordered a couple of pretty cloth ones...don't know if they are double layer or not.

Love the plaid combo and had I seen you in public wearing it, I too would have given you the thumbs up!

Love the plaid. Masks are a fashion item these days.

Thumbs up for the plaid! I love the new masks and was intrigued by the moose in the maple leaf. Creative! I too should be counting the number of car coffee dates I've had over the past year. I've come to appreciate the comfortable seats in my Subie. :)

My hair is ready for a cut. It does that flippy up thing, too.
You are such fashionistas!!! You look terrific.

You're not the only ones who sport different patterns. I just have one plane white mask and a few blue ones.

Love those new masks! That looks like Royal Stewart tartan.

400 days was some trigger. Our Iran hostage crisis, with the members of the counsel's office being held hostage, lasted 404 days of Jimmy Carter's presidency. Reagan was the beneficiary of the freed hostages.

I think if you lightly trim to smooth out the rough patches just a bit, you will still like having the longer beard. It is still new and finding its homeostasis. You just need a bit more time. That is what I found for me anyhow..... a light trim to smooth out the errant areas while it all filled in. Do not give up just yet!

you folks are so fashionable. You make me feel guilty. My masks are black, white and denim and I grab whatever has been recently washed!!

I now have enough masks to either match them to my outfit or at least make them not clash too badly. I love Sue's new hat and mask. I just might have to get one of those Tilley's.