I might as well take a few minutes to drop in to Blogland. We have been back from the cottage for almost a week, but what with unpacking, getting ready for company and then hosting said company, my thoughts have not been on posting. This won't change much for a few weeks as we first ready ourselves for Thanksgiving and then for another little trip: this time to visit family.

In the meantime, here are a few photos from our week in the country. I have so many that it's hard to know what to include and what to leave, but here we go.

We took the backroads to the cottage, but that was more than two weeks ago, and the colours were not very advanced. They came on quickly however, and were becoming quite wonderful within a few days.  We're not there any more, but I expect that autumn colour is already past its peak, or nearly so. 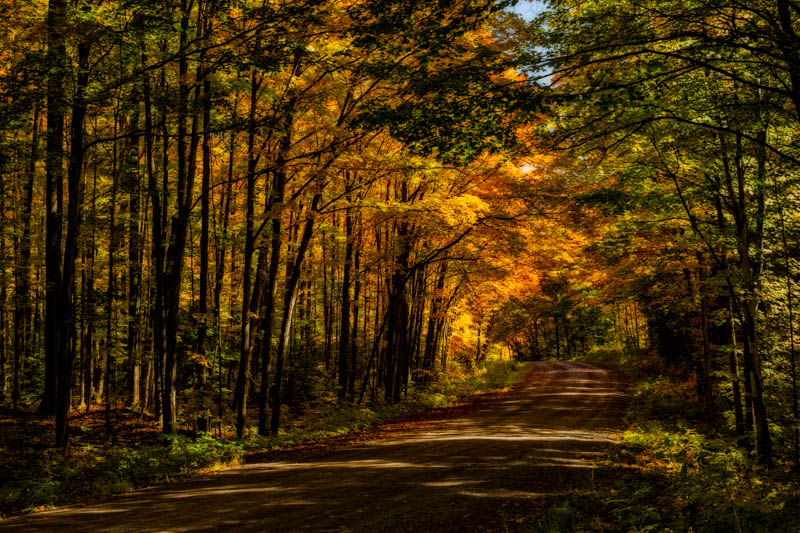 The above shot was taken very near the property along Glen Alda Road.

Below: a photo from a few days earlier of rapids on Eel's Creek, near Apsley. I used both an ND filter plus a small aperture to slow the shutter down enough to achieve the silky water effect. The foliage on the other side was quite splendid. 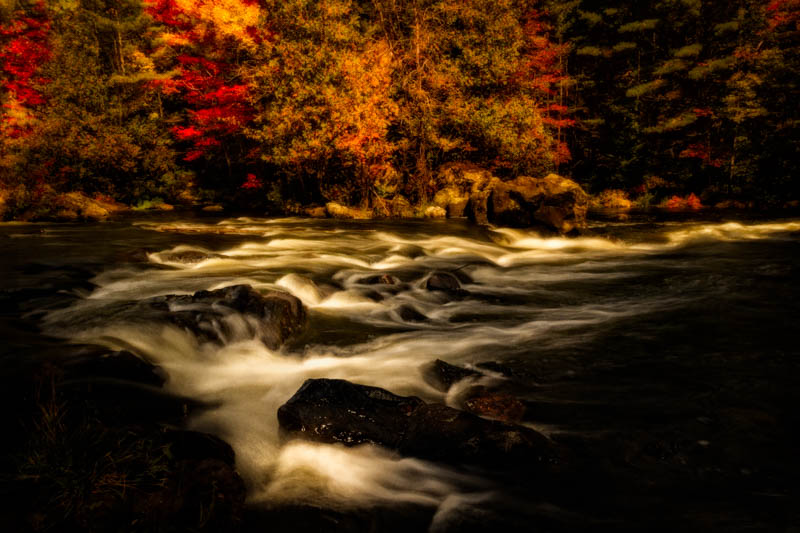 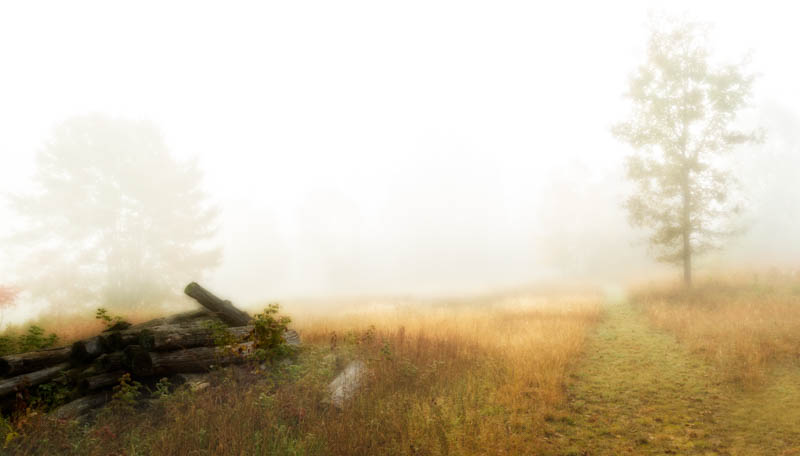 Here are a few photos from around the cottage property, both taken in the morning. Above: we had several foggy mornings and I wandered happily snapping many pictures. This is one that I liked with the logs in the foreground and the path leading our eyes into the frame. Below: near the end of our stay, we had a very fine sunrise. This was a somewhat lazy shot, taken almost from the back door. It's not sharp, but I sometimes prefer less than tack sharp photos. 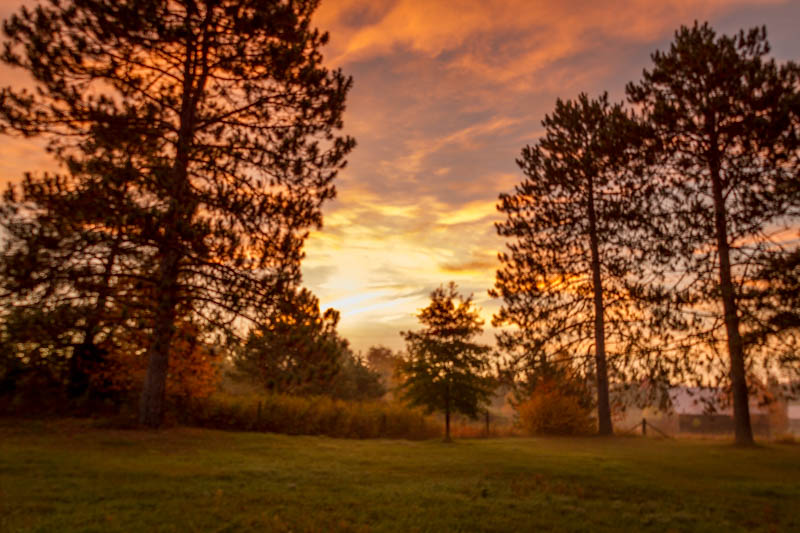 There is a photogenic old barn on the property, and the way Brian mows the walking paths creates nice lines and colours. On this morning, the sun was just peaking over the trees. I stopped the lens down to create a sunburst effect. It's nice to play with this kind of effect every now and then. 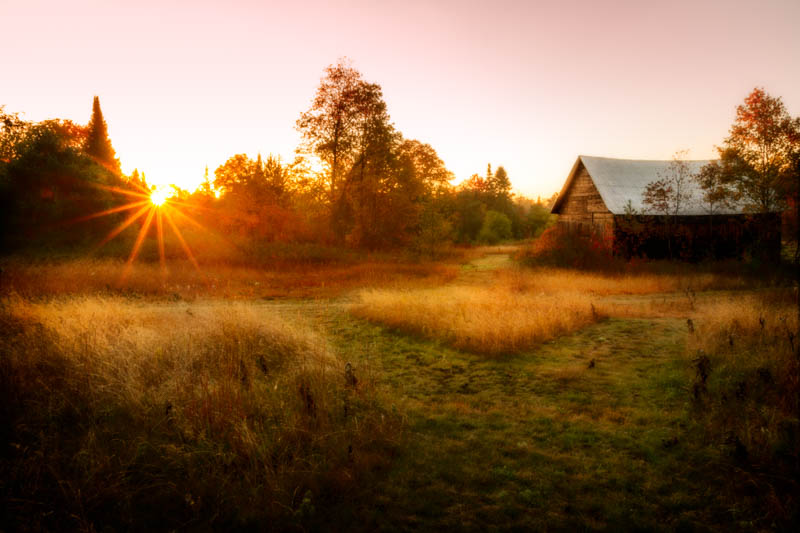 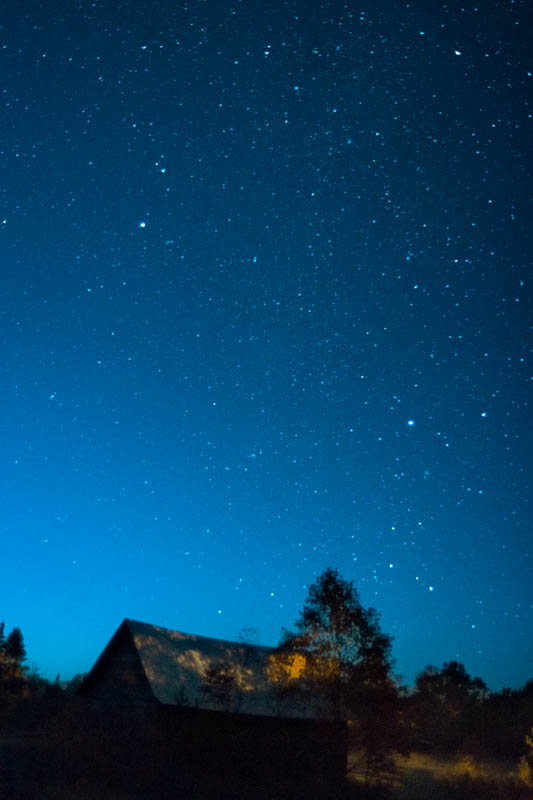 Above: the same structure at night. I wanted to experiment with star photos but I included the barn for foreground interest. The light that you see emanates from the streetlight, just inside the entrance to the property way across the fields from the barn. The reach of this one light surprises me.

Another building on the property is the former planer mill which Brian has converted into a screened in structure, which gets us out of the elements and away from the multitudes of insects. I have taken many daytime photos, but here a nighttime exposures with lots of starry sky. You may or may not be able to see the path of two planes just over the treetops in this downsized version; you can click for a slightly larger view but not that much larger. 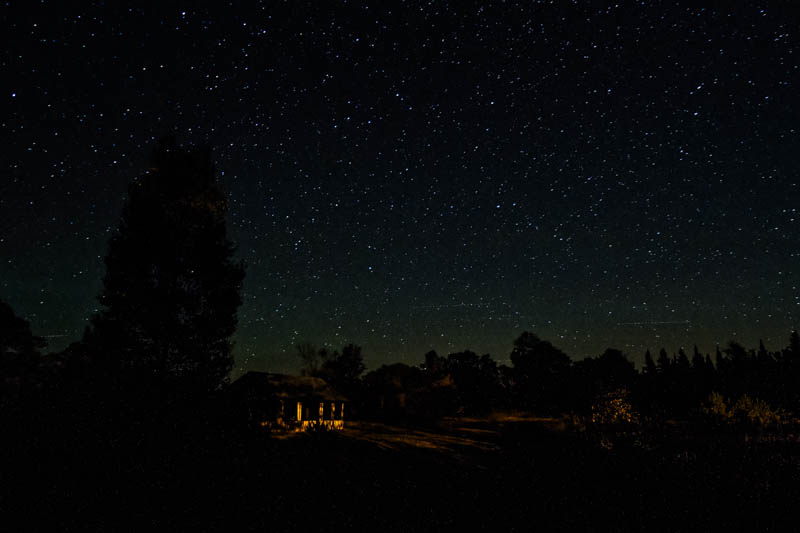 We sat inside the mill last Sunday afternoon; this was part of the view. 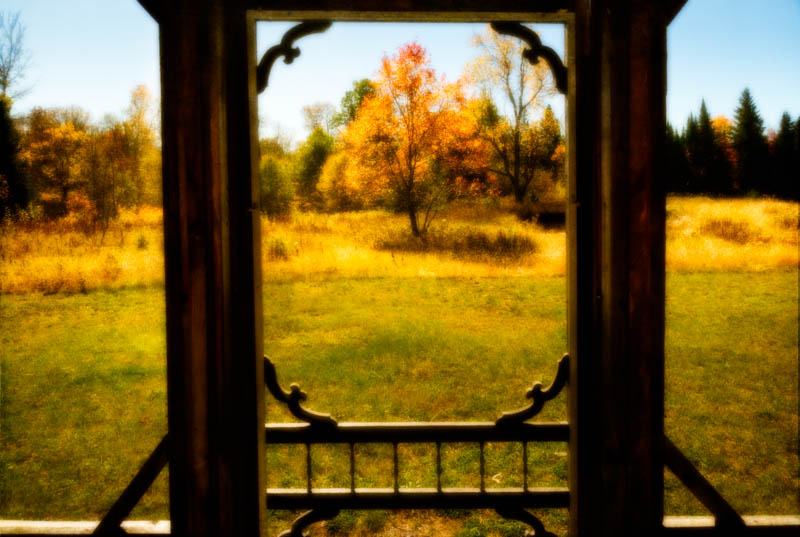 Leaves were falling in the whispering breezes, so I stepped outside the door to take a short video. I handheld somewhat shakily but you can begin to hear the whispering of the wind in the trees along with crickets and some background human chatter.

Finally, although I could go on and on, here is a photo of Brian toasting a marshmallow around the campfire. I think it was well toasted. Would you believe flame broiled? 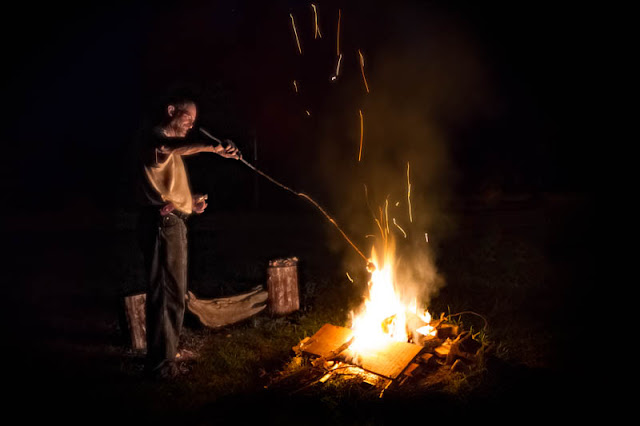 So ... I guess that's it for a few more weeks. I hope you are all enjoying autumn in good health. Happy upcoming Thanksgiving to any Canadians who happen to stop by.
Posted by Anvilcloud at 10:39 am 30 comments: