I woke up early yesterday, and a minor miracle occurred. I actually got dressed and grabbed my camera gear. It had been about two months since I had done that — got up early and headed out. But, the sky was clear (too clear for the best sunrise) and the weather was not too ominous (for a change), so out I went.

I just drove around the corner really, not much more than a mile, and stopped where I had taken my solstice photos that a few might recall. The corn had grown very tall, and I wanted to get a contrasting photo. Well, it turned out that it was too tall to see beyond to the glimmer of light, so I mostly took surrounding photos.

These were all taken just before sunrise when the light was just peeking over the horizon. It can really be best time to shoot. All but the first of the photos have a partial Orton Effect applied in post production: "Orton imagery, also called an Orton slide sandwich or the Orton Effect, is a photography technique which blends two completely different photos of the same scene, resulting in a distinctive mix of high and low detail areas within the same photo." (Wikipedia) Of course in the digital age, we tend to produce the effect in post and not by actually sandwiching two photos.

Since the corn was too tall to be really a viable subject, I included the fence in the first two to use a bit of a foreground element. 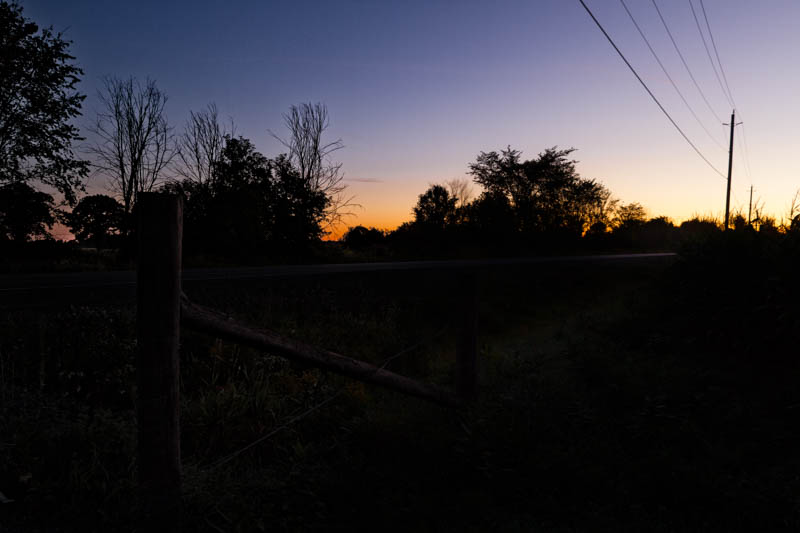 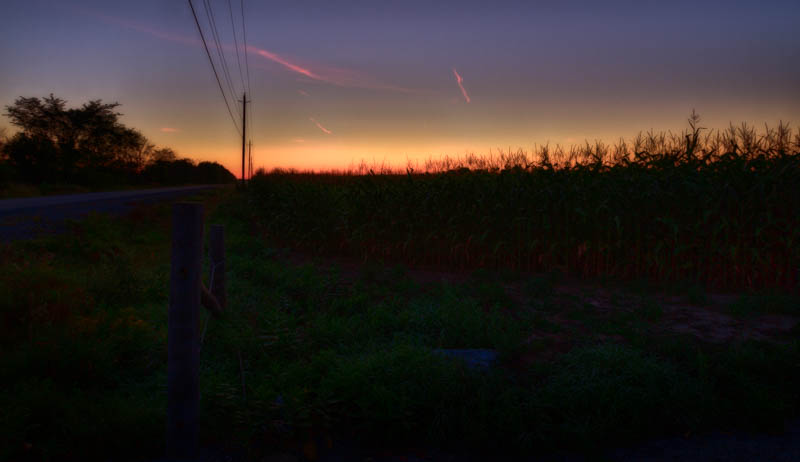 Then I turned about 90° to the right and shot down the lane with the corn field of my left. 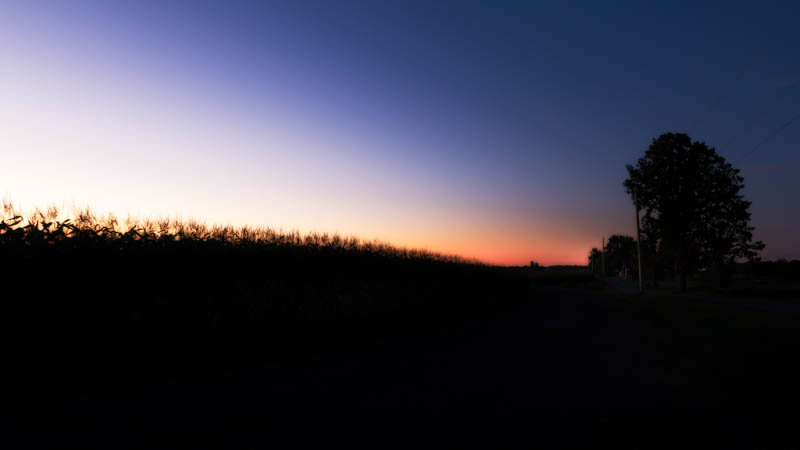 There were two driveways to the property, so I moved to the other one and took a photo that included the sign: Beckwith Berries and Wild Blueberries. They put up a stand even nearer us in strawberry season, and we enjoy several quarts during the Wimbledon tennis tournament. 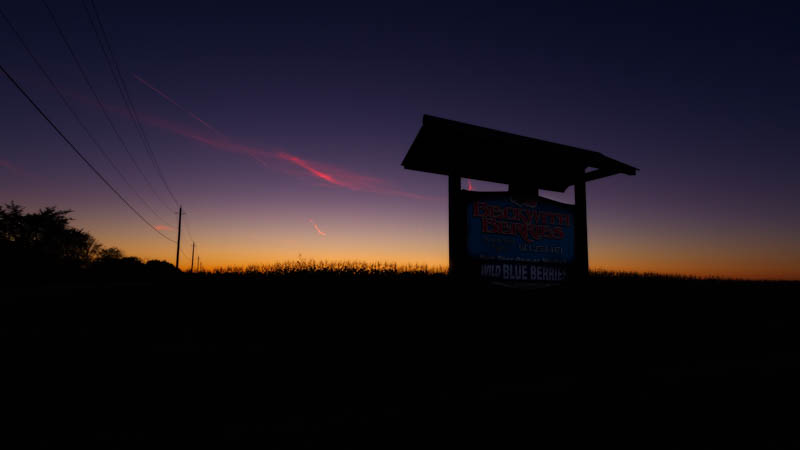 Finally, I moseyed across the road for this shot. 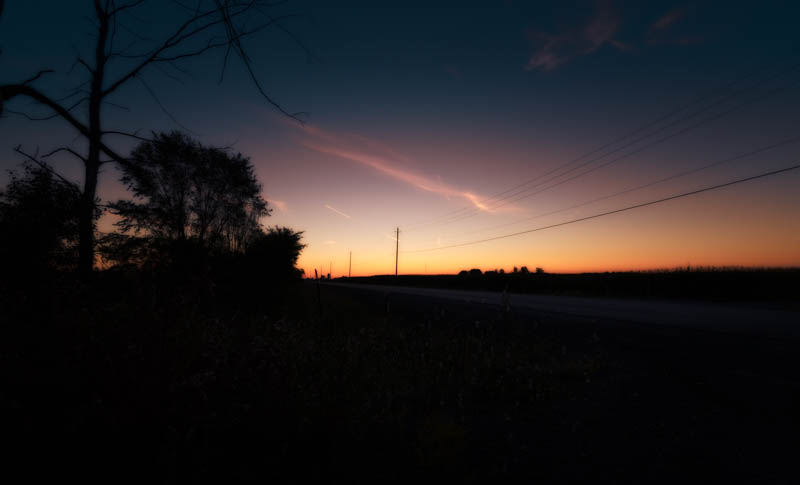 It was good to get out again for the specific purpose to taking photos as opposed to snapping pictures when primarily doing other things. I woke up early again this morning, but a look at the thick clouds induced me to roll over — rather a typical morning for this odd, rainy, cool summer.
Posted by Anvilcloud at 7:59 am 11 comments:

We received an emotional call from a distraught little girl last night. Her cat, Asha, died at the vet's office. She was old and not well, and it was her time, but it is not easy for a child to lose a pet -- or even an adult for that matter. Both kids were highly upset when we got there. JJ calmed down soon, but poor Dania was in a state for hours. She would gain control and then subside into anguish once again. I think, however, she was ready to sleep when we left. I was lying with her, and she kissed me good night and rolled over.

These were pics that I snapped just last week. 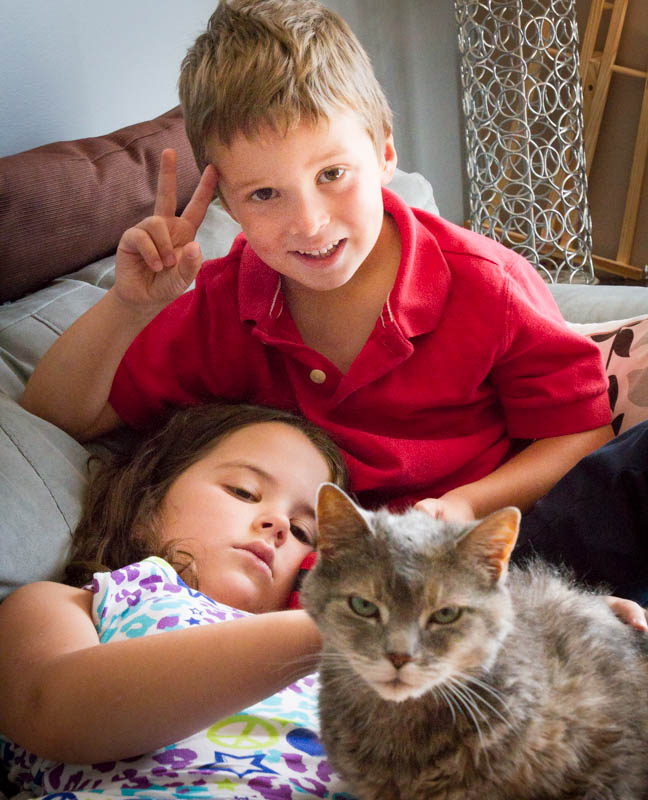 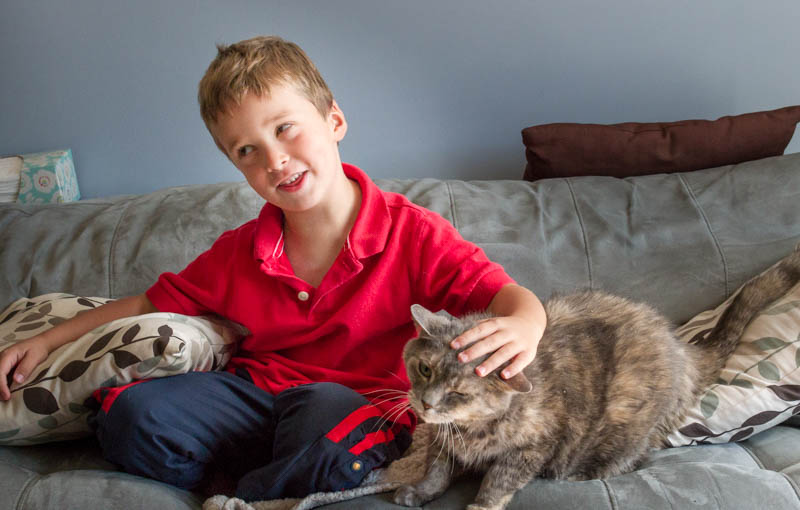 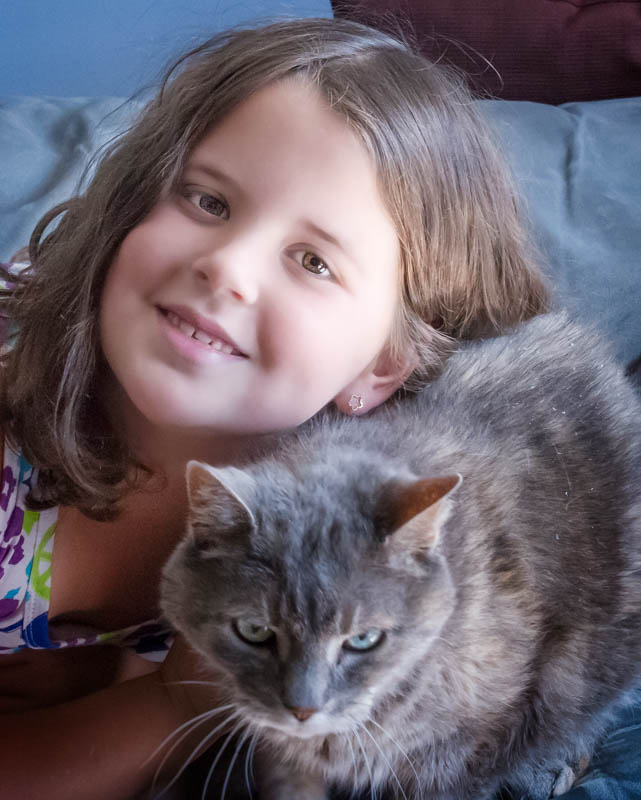 AC Has a Problem

As some of you know, our previous car — a black Honda CRV 2003 — was totalled when we were rear-ended last October. By the end of that month, we had replaced it with a 2010 CRV, also black.

For some reason, I seem to have a problem with it as shown in this photo. 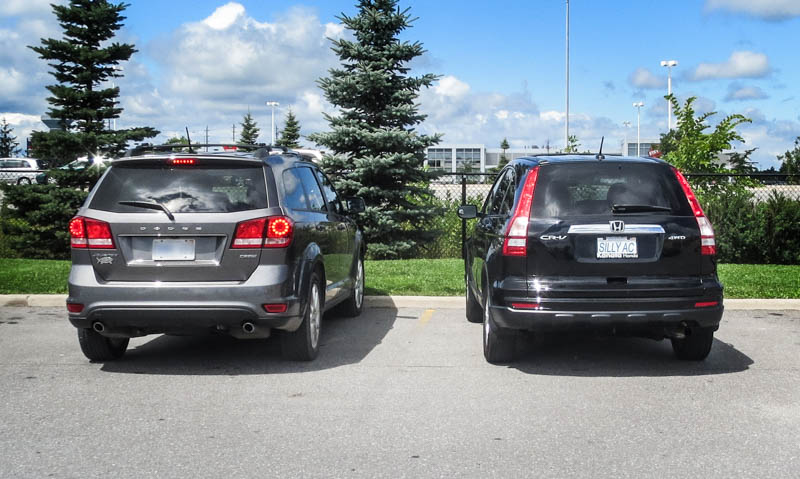 That's right! Whatever the cause, even almost a year later, I have great problems parking the thing straight. I can't quite figure out why because this has not been a problem with other vehicles.

I guess the license plate is right: Silly AC.
Posted by Anvilcloud at 11:54 am 11 comments:

Our Final Week with the Kids

My goodness. Summer hols are almost done; the kids have one more week before school begins. Mom is with them next week, so our stint is done. It was a long week. The weather was not good for pool time; in fact, it was so rainy for two days that we were confined indoors. It did not help that I spent one of those days plus two nights in some discomfort -- from something I ate, I suppose.

One day, we did enjoy a nice little hike on a path near the river.

We are busy babysitting this week, so I'm going to post a couple of pictures and run.

I woke up early enough to catch up on blogs this morning. If you have posted recently, I have likely read your blog, even if I didn't stop to comment.

Some outtakes from last weekend with company.

We Took Our Guests to Wheelers

Our county, Lanark, proclaims itself the Maple Syrup Capital of Ontario. We frequently take visitors out to Wheelers Maple Sugar Camp to experience this bit of local flavour. So, Sunday found us taking the 45 minute drive to [near] McDonalds Corners. There are two maple syrup operations nearer us, but Wheelers is our preference. 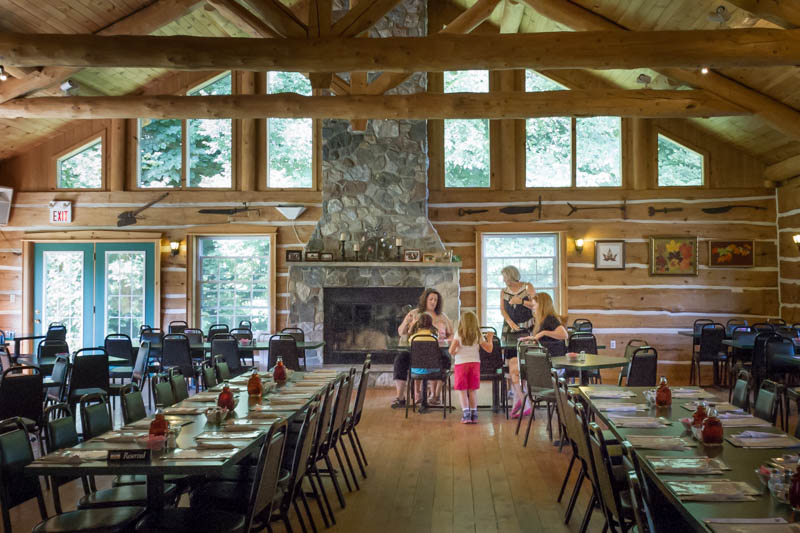 Wheelers is a family owned enterprise. They built the restaurant and other buildings themselves. I m always impressed when I walk in.

↑ The tribe is seating itself and waiting for  pancakes ↓ . 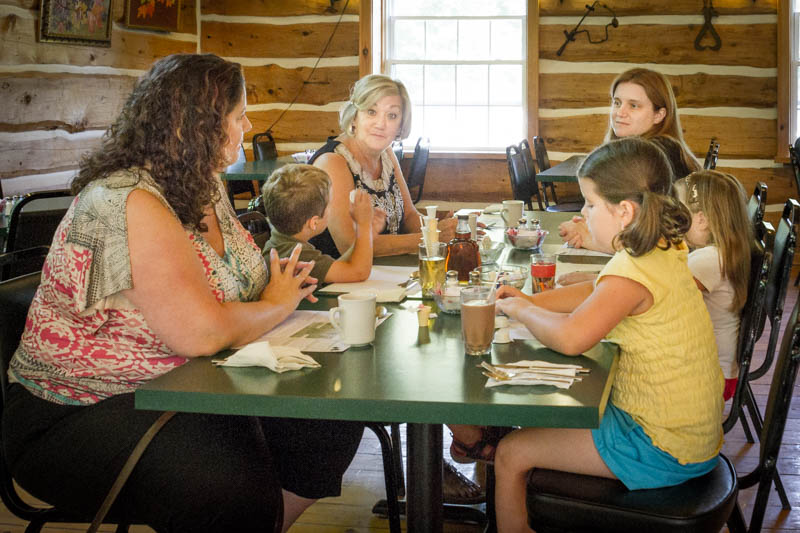 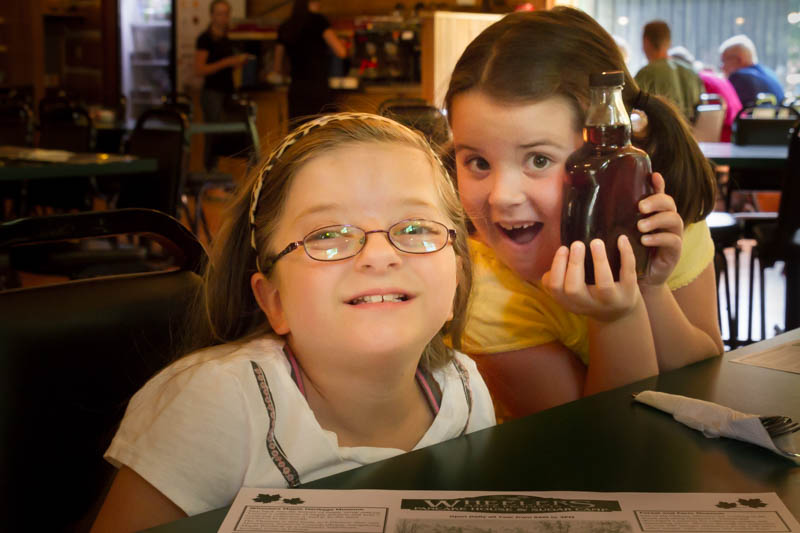 After the food comes a quick tour of the boiler room. ↓ 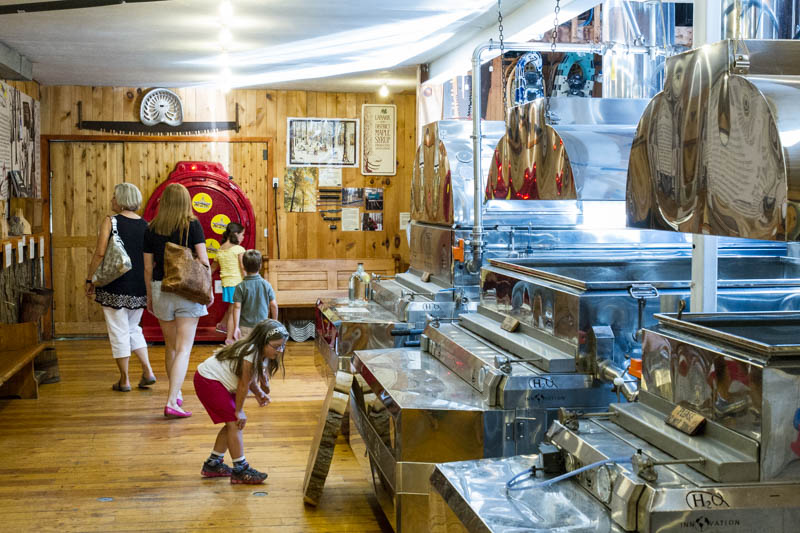 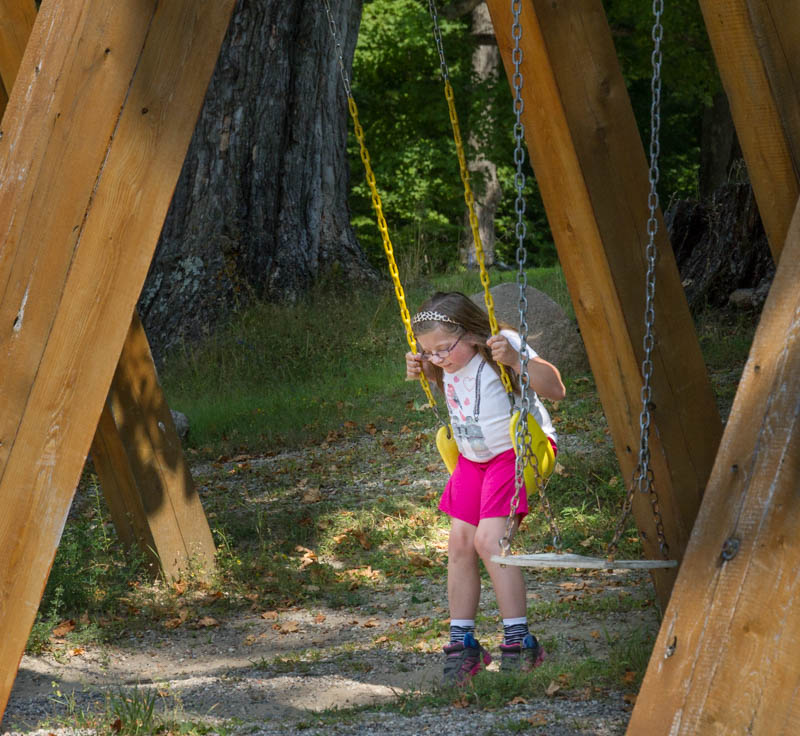 There is a play area for the kids as Frances swings ↑ and JJ emerges from the sliding tube.  ↓ 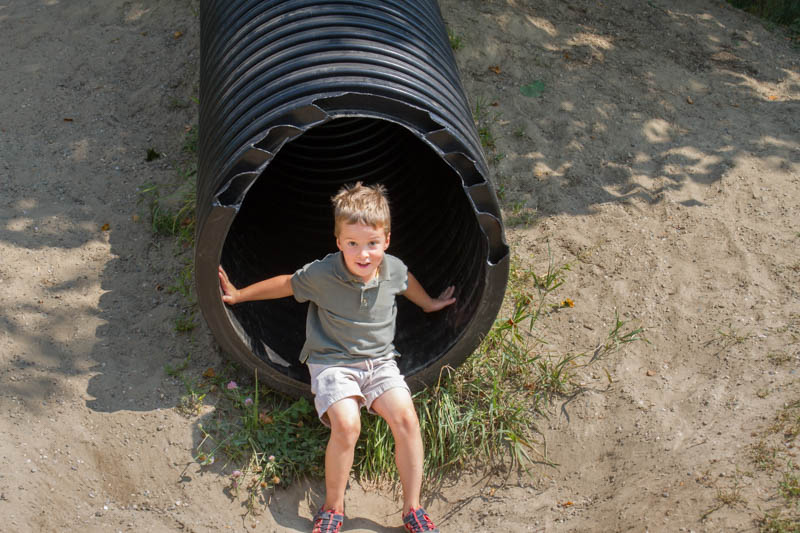 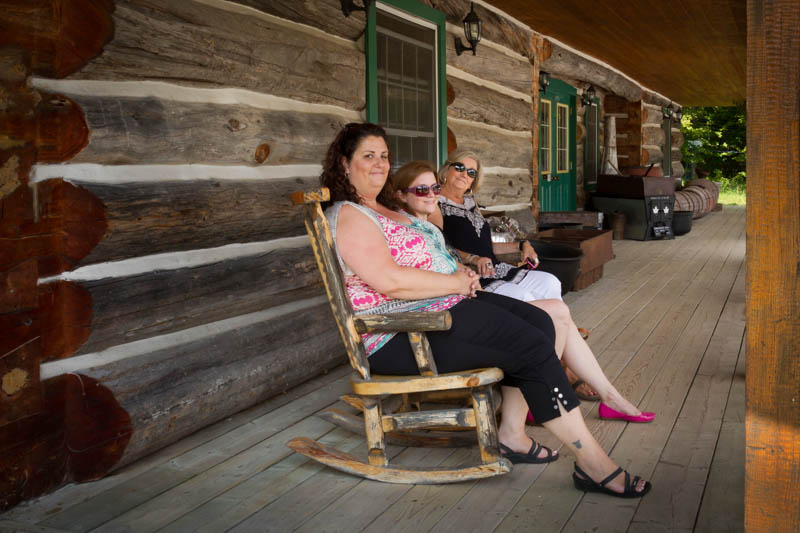 There are rockers outside the museum for the adults. Andrea got the baby bear rocker ↑. Meanwhile, AC roamed inside and took a few pics, including this one ↓ of old cast iron pans and utensils. 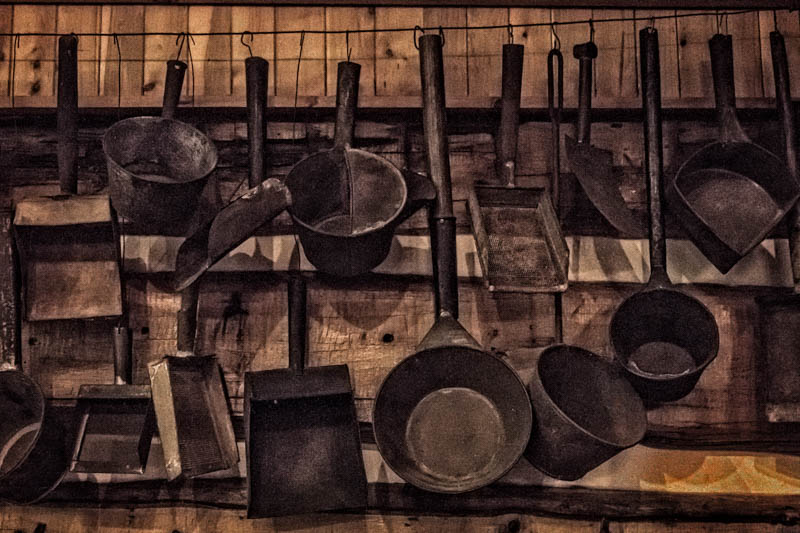 The children rejoined us. Frances sat quietly. Danica did not. ↓ 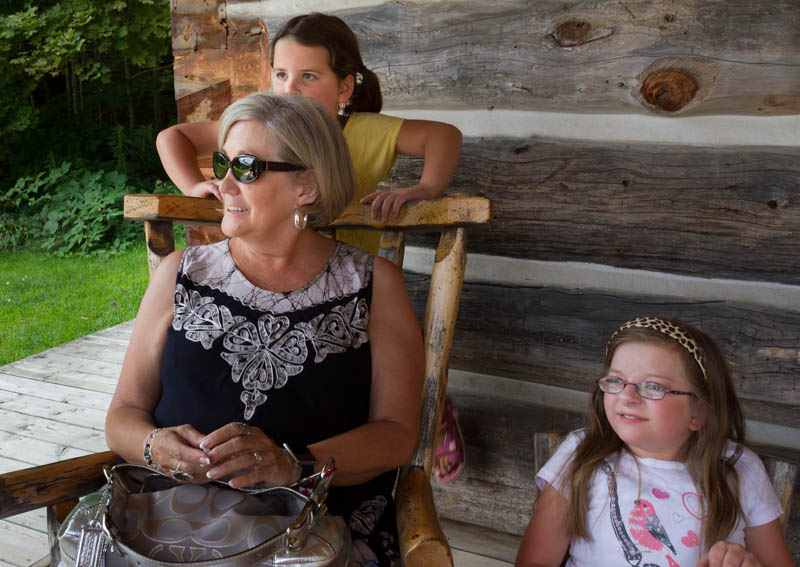 All in all, it was a pleasant outing, followed by the drive home and time to sit and wag the chins.
Posted by Anvilcloud at 7:38 am 10 comments:

The main event of our weekend was to be a Dragon Society Tea Party. The ladies from a local church host "Tea on the Lawn" on Wednesday and Saturday afternoons during summer at the Mill of Kintail, so this fit into the plans perfectly. 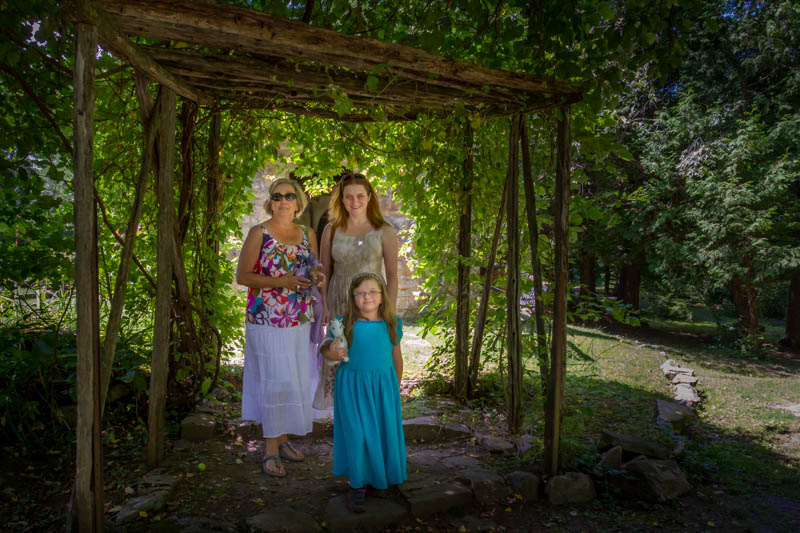 Sue, Andrea and Frances (right to left above) exiting the cloister before descending the stairs to the mill.  ↑

We were early, so we waited at the picnic table by the deck for awhile. ↓ 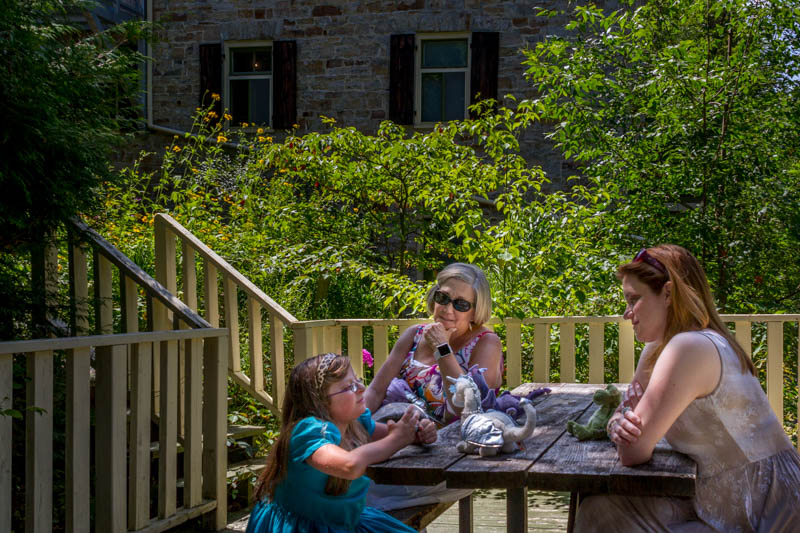 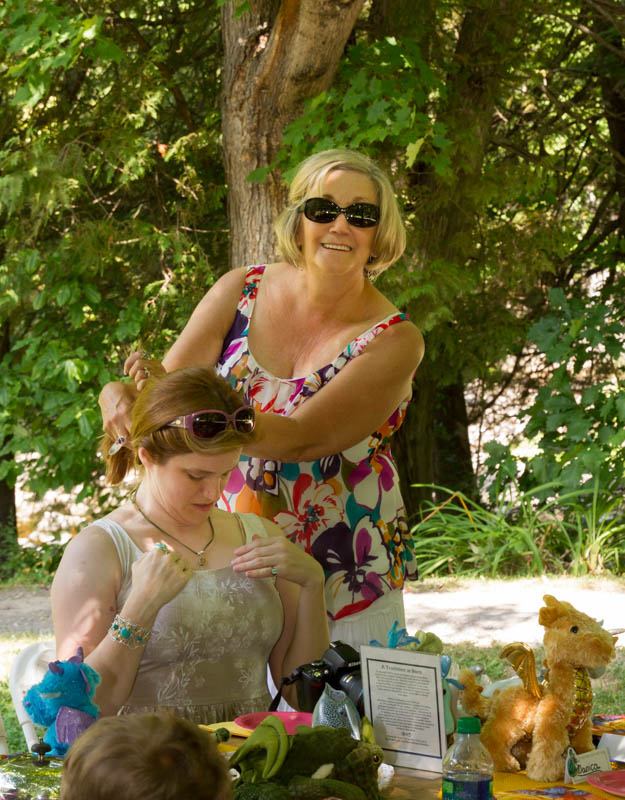 After touring the museum for awhile (see yesterdays post), we began to ready ourselves for the event. Sue had crafted dragon necklaces and is helping Andrea with hers tn this photo. ↑ 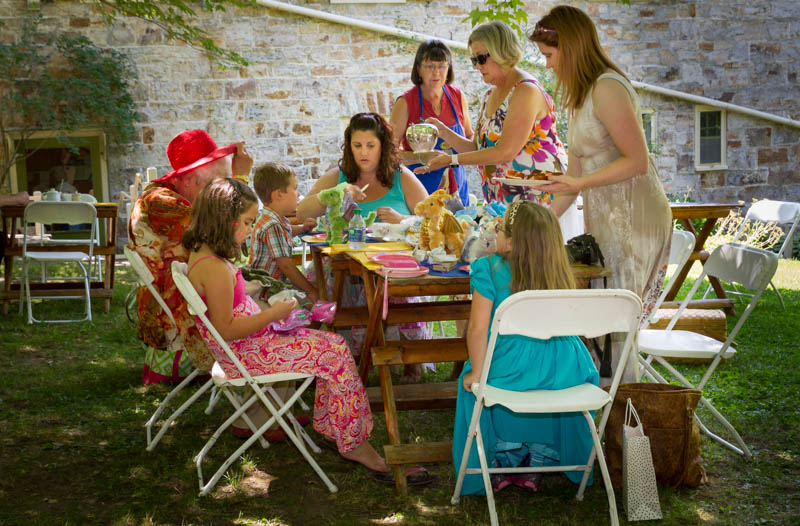 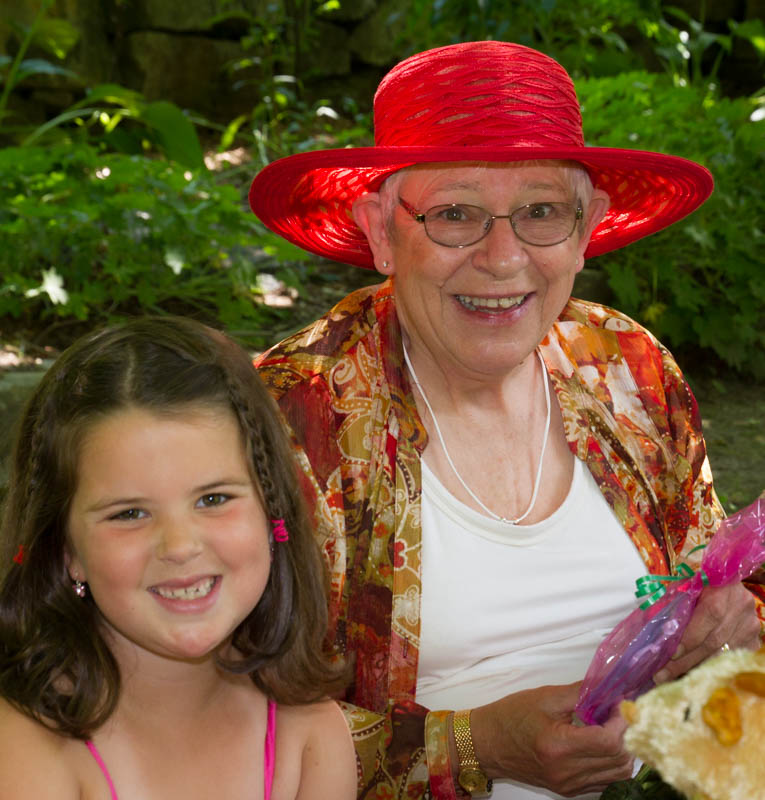 Both Mary and Danica seem pleased with proceedings ↑ as does Frances ↓ , the Dragon Mistress. 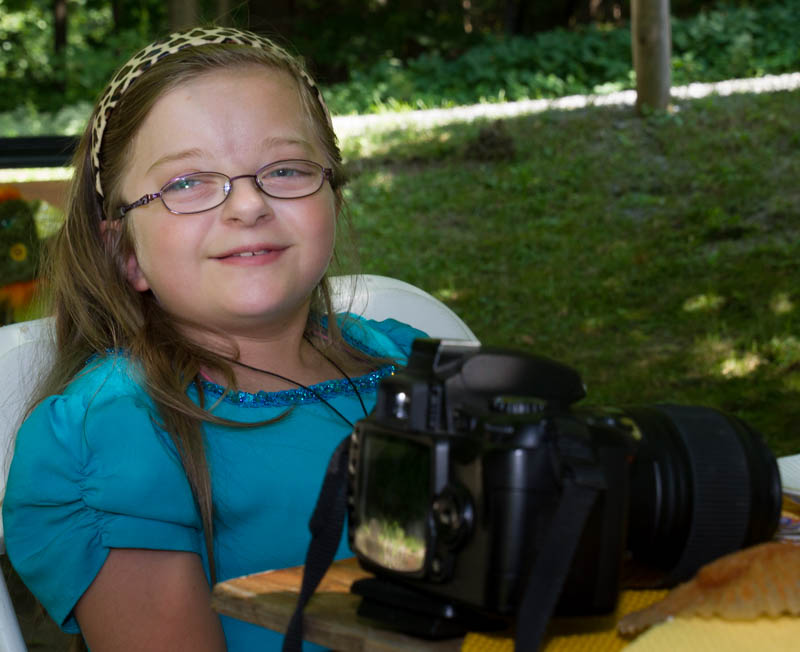 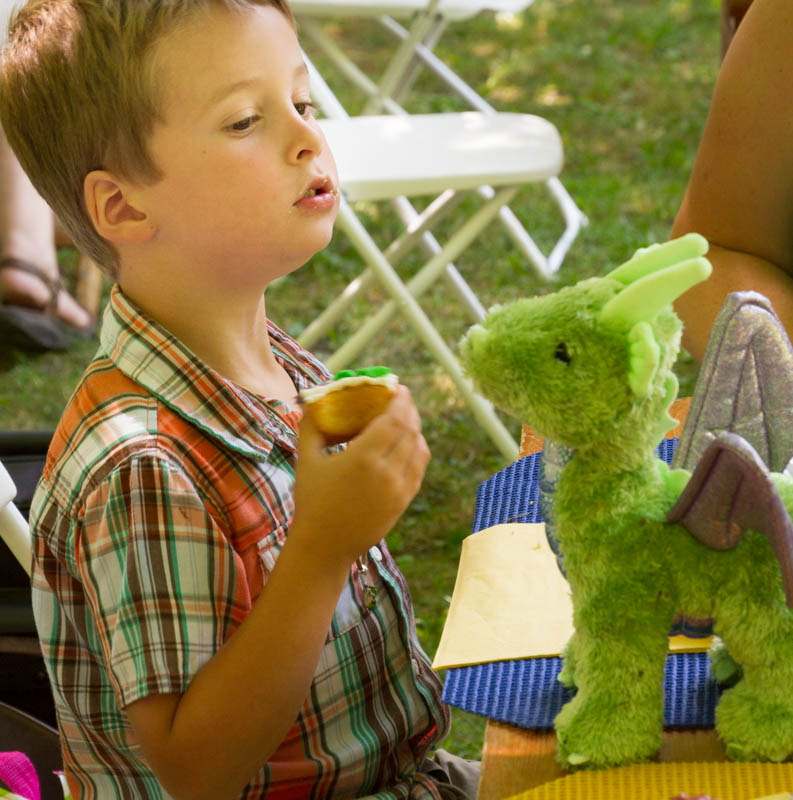 I think JJ's dragon is about to nab JJ's cupcake. ↑

But the other dragons seem content with their lot in life. ↓ 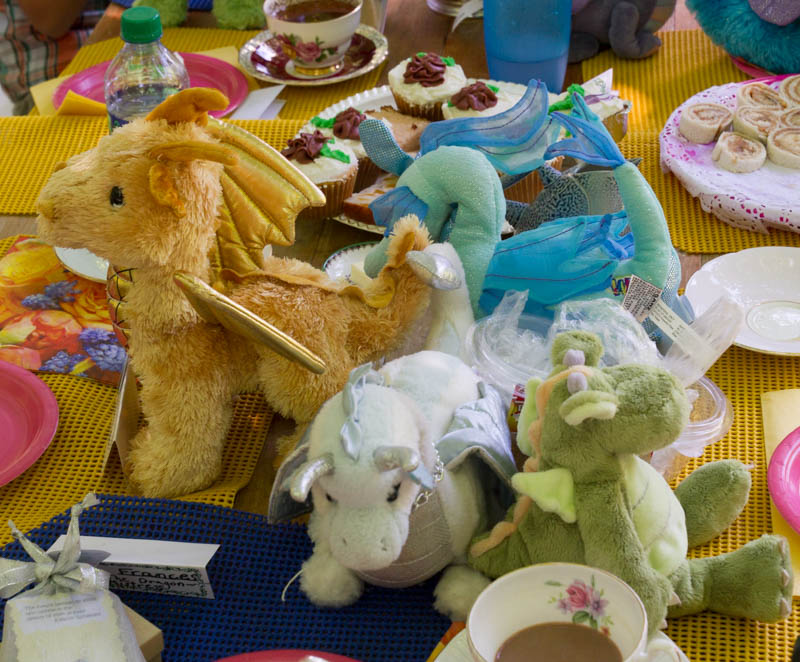 Finally: a few photos of the group from various angles. 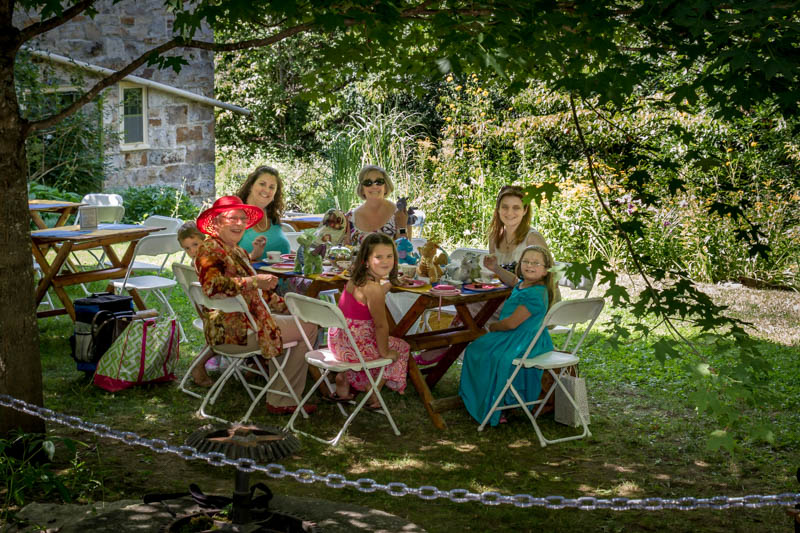 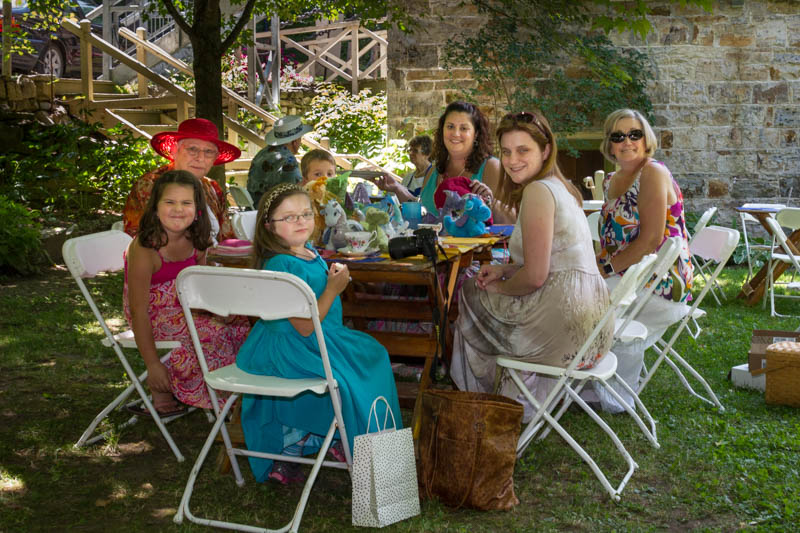 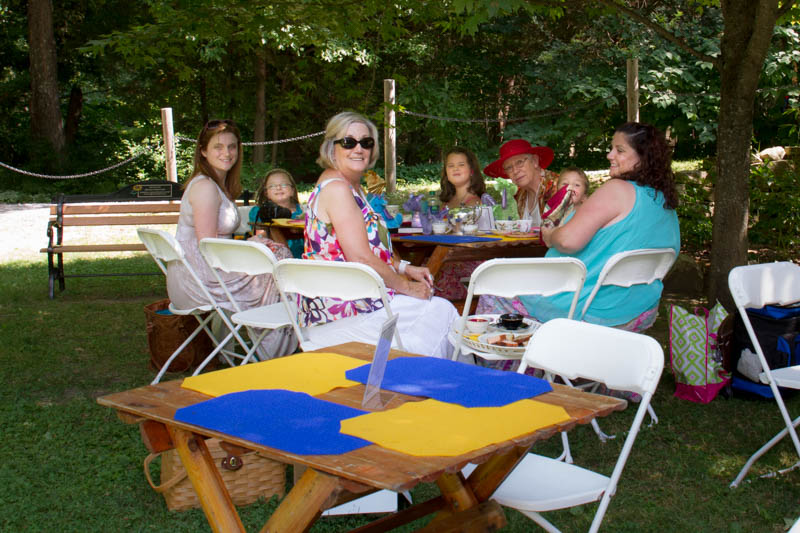