Apparently, when I run out of pictures, I also run out of blog material.

I had intended to write a book review of Zealot: The Life and Times of Jesus of Nazareth by Reza Aslan. I got it for Christmas and quite liked it. But I waited so long to get around to it, that it just feels stale.

We are minding the grands today because it's a PA Day. They have been playing on their tablets for awhile. Babysitting is certainly easier than it used to be. We'll get them out and about later. I am sure that a visit to Tims (coffee and donuts) will be on the agenda, and maybe some exercise of some sort. It's relatively mild here today — just a little below freezing — so an outdoor activity should be acceptable. It's a nice change from the brutal cold of the past week or so.

I have had three medical appointments in the past week, which is weird because it has been months since the last one — sometimes it's almost a year between visits. Two were long ordained appointments that just happened to fall in the same week.

The urologist was most rude and gave me the finger. Which he probably felt that he had every right to do after I gave him the bum's rush — so to speak. Yes, I guess we're even.

The other specialist was testing out my decaying knee and suggested that I purchase a brace, which I did yesterday. It isn't likely to help a lot, but it's worth a try. They were not able to fit me for the kind which she recommended because my leg has gone sort of pear shaped. Knee problems have caused my quadriceps to shrink on my left leg: the result being that the brace that fit my quads would barely pull up over my larger calf muscle. You see, it's supposed to be the other way around — the quad being larger than the calf.

No wonder I walk funny.

Oh ... and the result of the third appointment is that it is time to do my annual poop test. What fun!

JJ Being a Canadian Boy, Eh 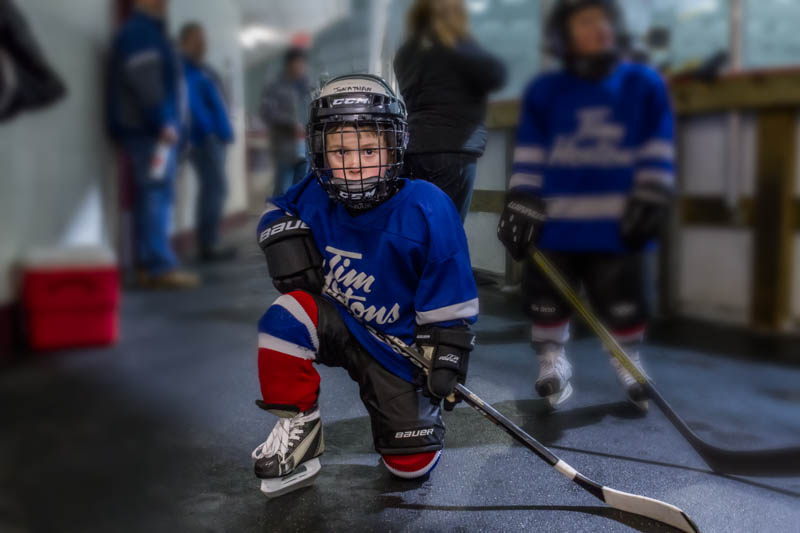 Doncha just love that ↑↑ pose. After a long layoff, we finally made it to one of JJ's practices. He greeted us excitedly, and when we told him that we wanted to take a picture, that's ↑↑ the position that he assumed. How cool.

Then the boys hit the ice ↓↓, and he is certainly doing a lot better than the first practice that we attended. He's not setting the pace for the team, but he has improved greatly. 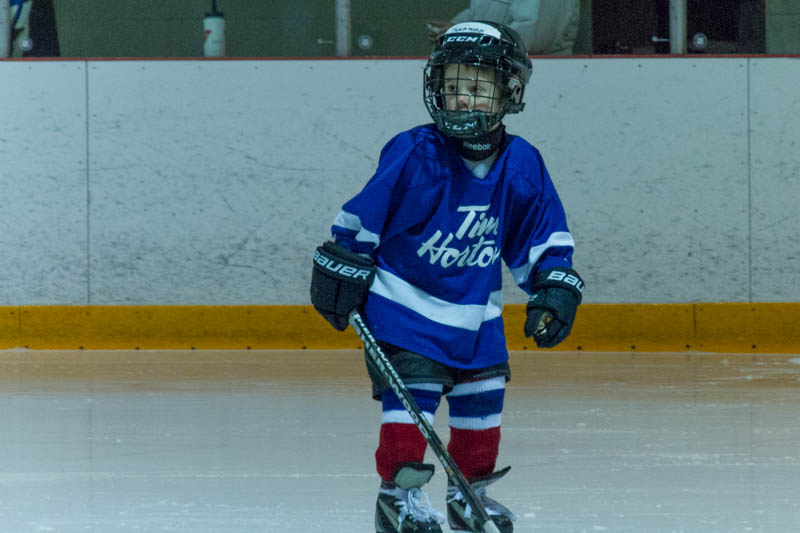 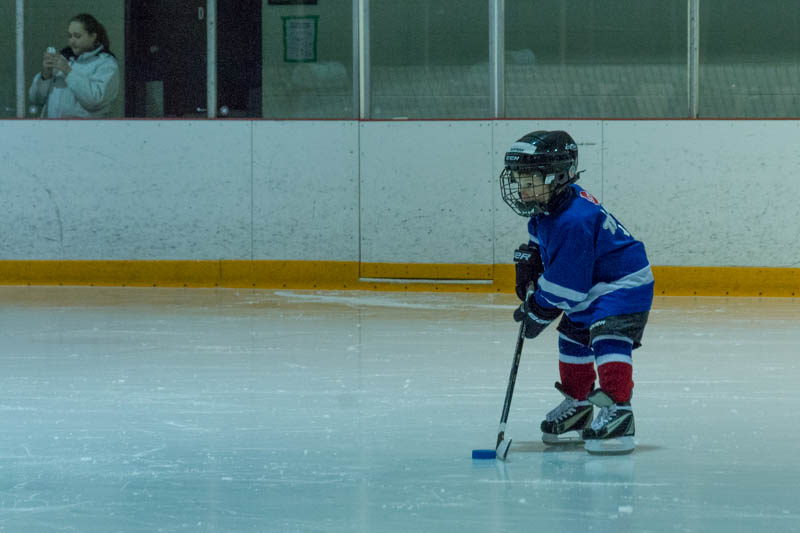 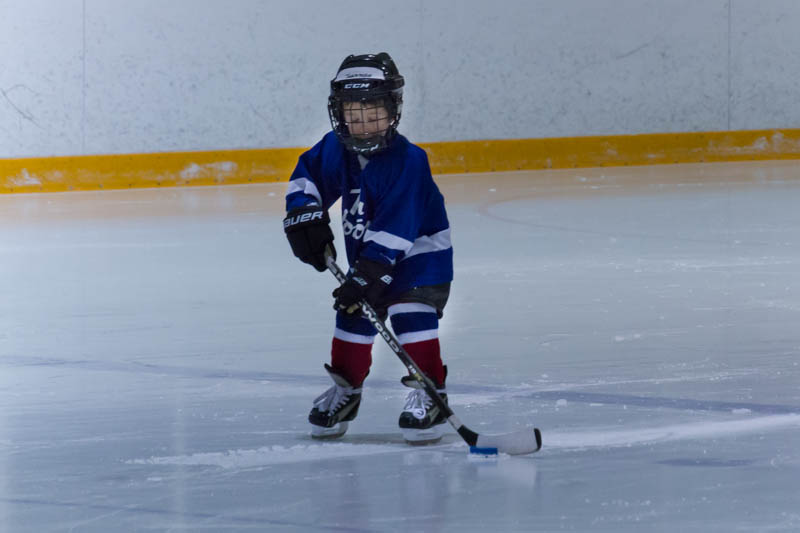 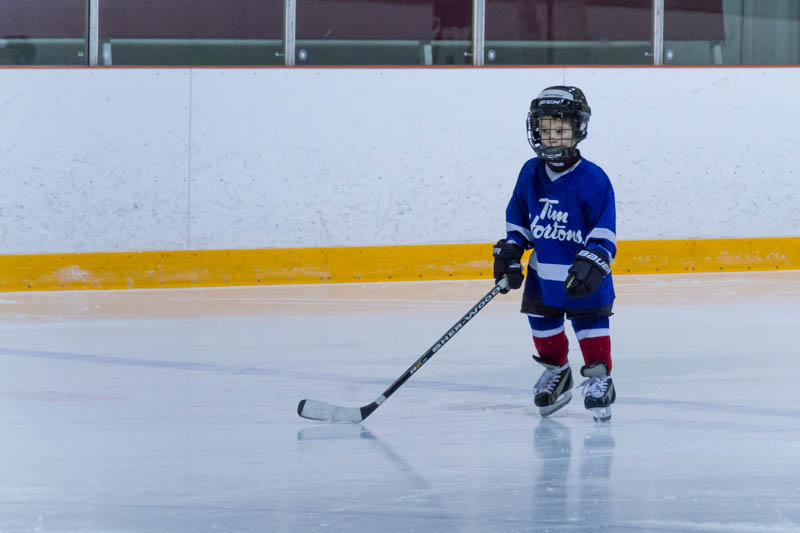 I wandered here and there to take various angles, while dad and grandma ↓↓ parked themselves under the most welcome heaters. 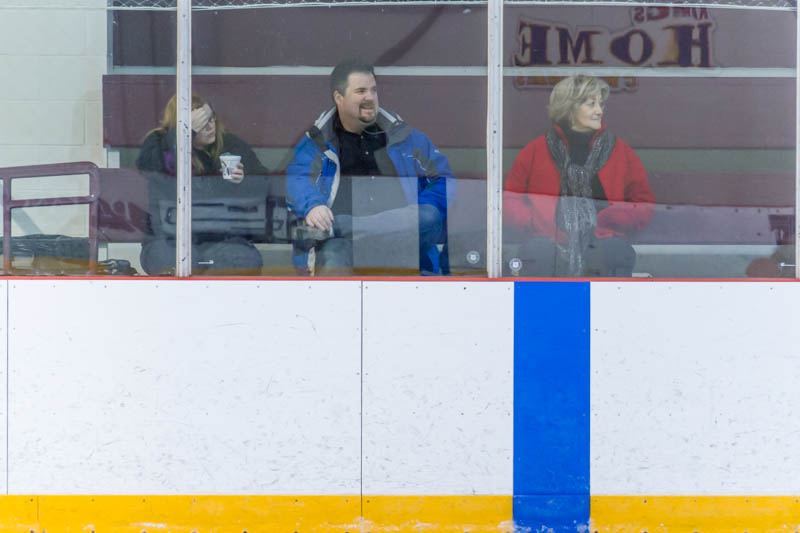 They had a bit of a scrimmage toward the end of the session. JJ is in the middle of both of these frames. 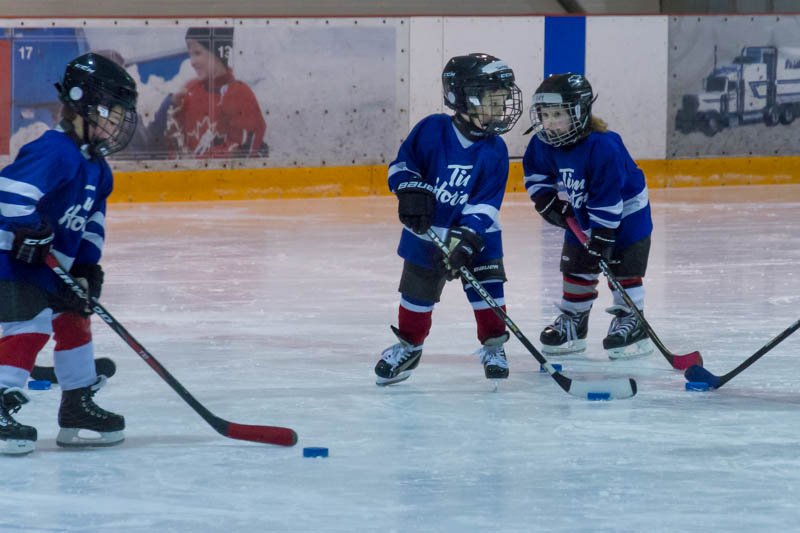 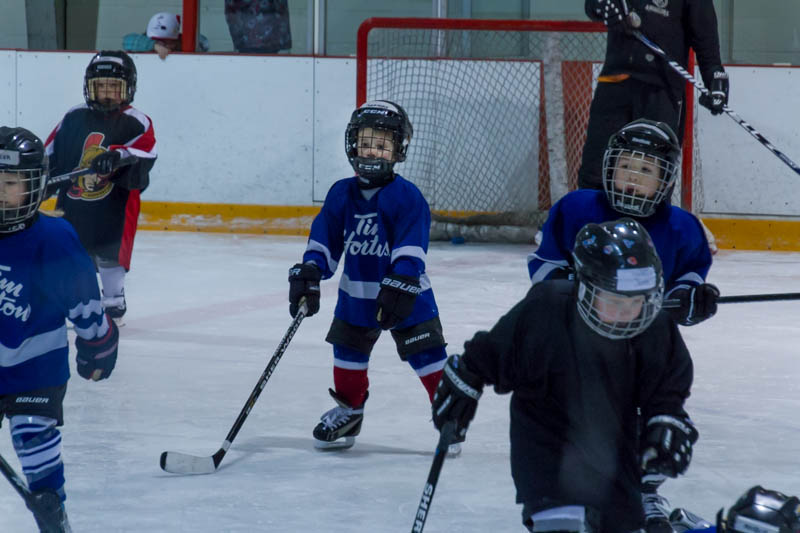 Then, we went home to get ready to go and see the "Desolation of Smaug." The resemblance between the book and the movie was sparse at best. I have laughingly renamed it to the "Desecration of Tolkein."
Posted by Anvilcloud at 6:00 am 11 comments:

A Cold Mist off the Mississippi River

The other day, I was asked to take the kids home after school. When we passed by Riverside Park, I saw a pretty mist coming off the water. I hurried home to grab my camera and drove back.

It was frigid with temperatures around -25°C/-13°F, so I wasn't about to spend much time outside the car. I did hop in and out a few times, and just about froze my fingers off. Man, was it cold!

Here are some of the results from the shoot.

For newcomers to this blog, there is a Mississippi River that flows through Carleton Place. It is not related to the Mighty Mississippi of the same name.
Posted by Anvilcloud at 7:08 pm 11 comments:

It's been awhile since I posted about the kids. To think that they used to be my GoTo fare.

Oh, the endless hours of fun to be had with Buppa's Big Bald Head. I did not coin this phrase. It's Danica's appellation, and I have the feeling that it will stick for a long time to come. I don't know what started the latest round of interest, but it may have been JJ with Danica soon joining in the merriment and taking over -- naturally.

Among other things, they are using a magnifying glass to look for hair (lol) and any areas showing signs of deterioration, of which there are plenty. They diagnose my problems, write notes, and bring me pills in the form of Valentine candies -- you know, the kind with little message on them. JJ and I don't particularly like them, but Danica does.


There is history in this magnifying glass. It was first used by my grandmother when she began to lose her sight near to the time when I came into this world, so it's ~70 years old although I am not quite than ancient yet. Then, my parents used it, although as my mother developed cataracts, she opined that the thing was wearing out because it wasn't working as well as it used to (another lol). Now I have it although I am not reduced to using it yet, except sometimes to read instructions on medication containers. Seriously, who needs meds more than us oldies, but who has more problems with vision than us oldies?

Anyolehow, I find it so gratifying that that the children find such joy and inspiration in my big bald head, and I hope that someday their children might get some use and joy from this magnifying glass. Wouldn't that be neat -- for it to be used by 6 generations? I don't, however, wish baldness upon any of my descendants.

From Apsley to Riverwood

On our last day at the cottage, we had to drive into the nearest village (nearest with any decent stores at least) to purchase a new lock for the storage shed. Somewhere along the line, I lost the old one — probably dropped it in the snow to be uncovered in spring.

On the drive into town, the clouds were gray, the road somewhat snow overed and rutty, and there were occasional little squalls (snow blowing across the road in localized spots). I kept thinking that readers might like to see a few clips of the route, so on the way home, I dug the camera out for Sue to shoot some clips. Of course, the skies were sunnier and the squalls less frequent by then, but I still put together a little montage of less than four minutes.

We begin in Apsley, follow 620 to Glen Alda and turn onto the road to the cottage. I have added a few labels to the clips to identify a few things as we pass by. The trip takes ~20 minutes in summer but more like ~30 minutes when the road is in this condition. The video lasts for 3:42.

It's not rivetting, but I thought some of you might like to see a bit of the geography of the Canadian Shield (cottage country) in winter conditions.

The video is shaky. Youtube has a procedure that will reduce the shake, but I opted to leave it in because that's the way this bumpy drive was.

Back on our Snowshoes

We took our snowshoes to the cottage without knowing whether our bodies could handle them. It's been a few years, and since then, I have developed foot and knee problems. Well, they didn't magically go away when I strapped on the shoes. but I managed anyway.

I got out for at least a short tromp on every full day that we were there, sometimes taking my camera along and sometimes not. It's a strange thing, but at the cottage, I will go out when it's windy, snowy or just plain frigid. Even at 35 below zero, once I was in the woods and exerting myself, I soon became a sweaty, old AC. On our last day, however, the wind was brutal, and for some reason we headed across the open field rather than into the sheltered bush. needless to say, we soon turned back.

All in all, I was pleased to be able to get back to this activity.

Thanks for joining us on our snowshoe adventures.
Posted by Anvilcloud at 6:00 am 8 comments:

I am such a Liar!

When I wrote that I was at the end of my Riverwood pics, I lied. Unintentionally of course. It was yet another case of forgetfulness by this ancient one. Actually, I have several more offerings in store for the faithful

Let us begin todays melange of photos with my nephew, Ben. He slept on the pull-out in the living room, and I could not resist taking a picture of him with his computer, iPad, and iPhone all close at hand as he lollygagged (or lallygagged) one morning. "Lollygag" caused some consternation when I used the word on Flickr, but in my world, it connotes relaxing and doing pleasant things. Some dictionaries think of it more as wasting time, but I don't use the that way. 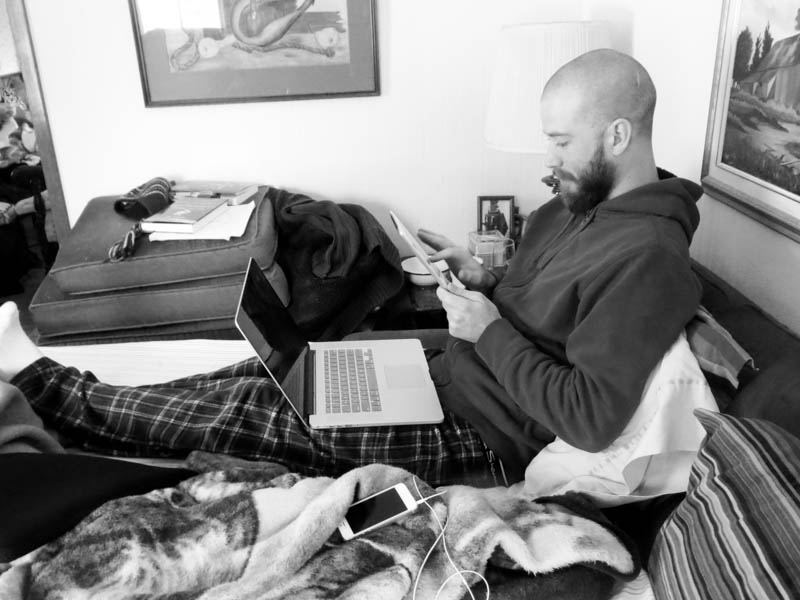 I took this photo ↓ of a corner of the cottage early one morning when I was up and about on my own. Sue painted the photo above the lamps quite a few years ago, and gifted it to the house. In the second version, I played with creating a multiple exposure effect in Photoshop. It worked, more or less. 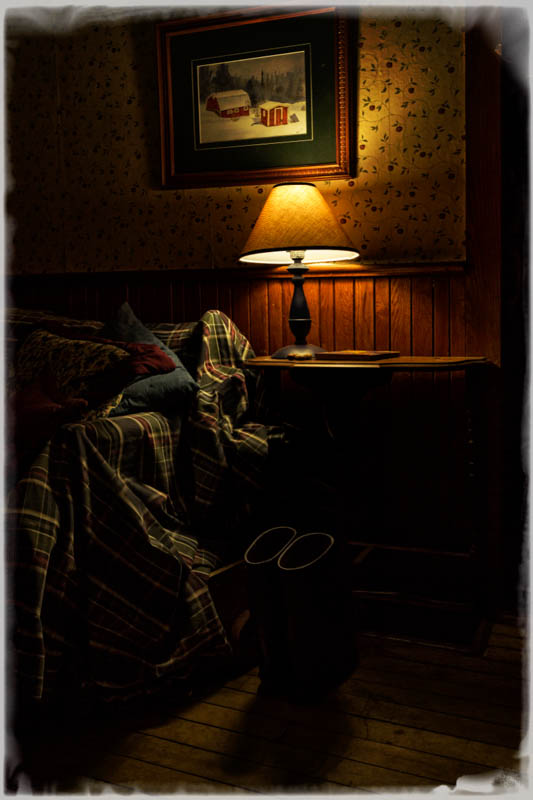 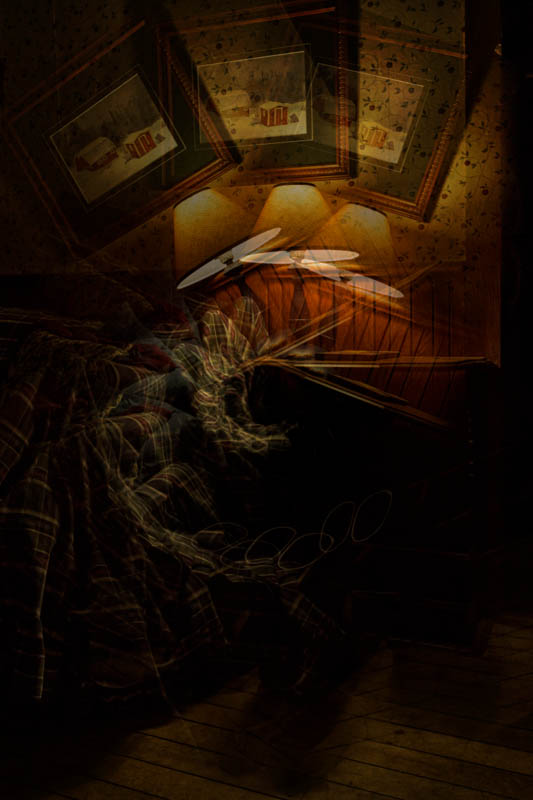 Staying inside for the moment, the kitchen cabinets are vintage. 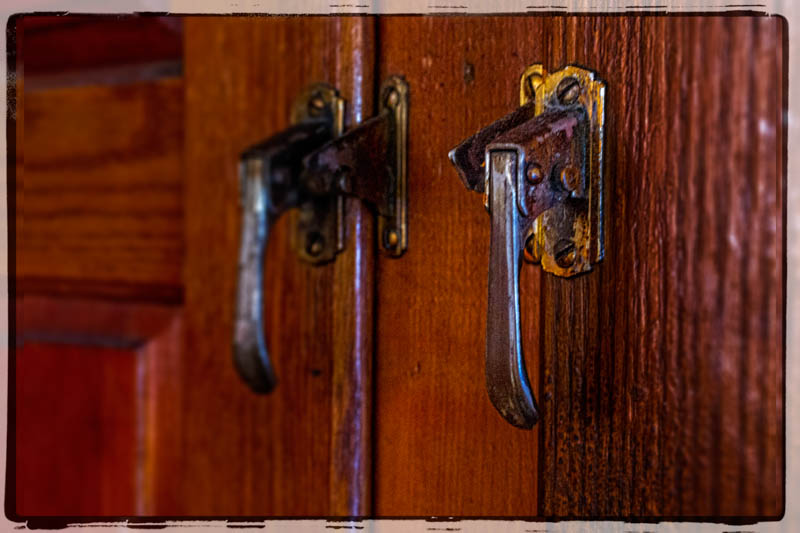 Icicles hanging from the hops plant just outside the side door. 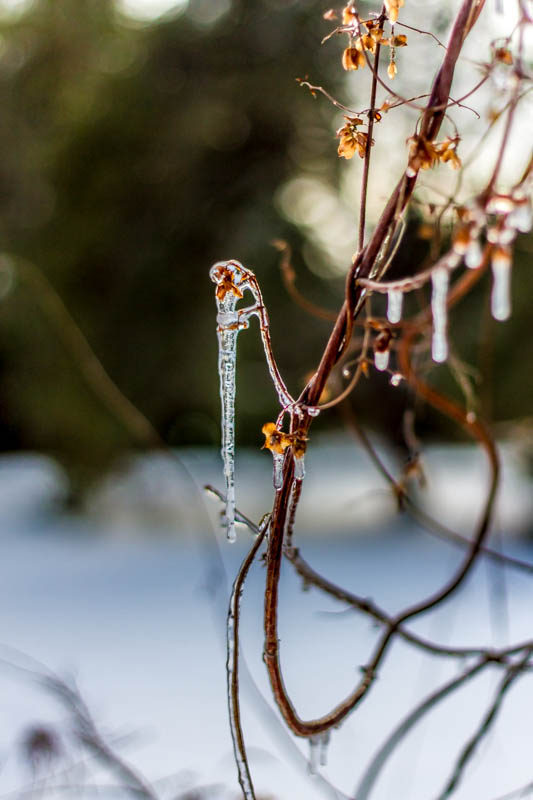 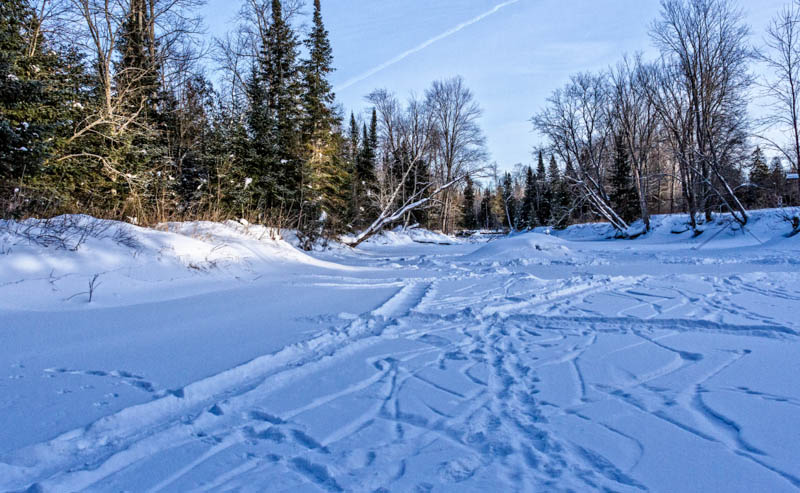 ↑ A view downriver along the frozen Crowe and ↓ a peek thru sunlit pine cones. 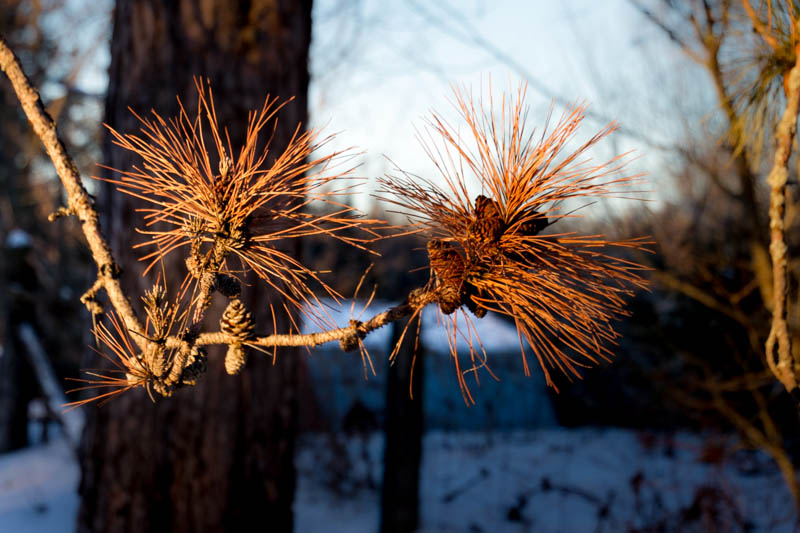 Finally for this post, I have pretty well ignored the garage this visit, so here is a pic ↓ from the stoop as the sun lit the garage/workshop early in the morning. 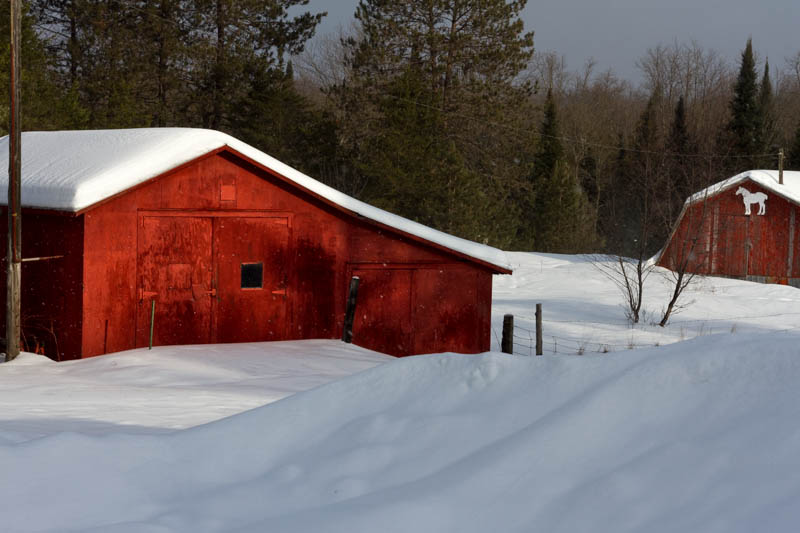 Well ... my goodness ... I think I have come to the end of my cottage posts. I thought I would post Riverwood (the cottage) in black and white. You have seen many of these previously, in colour, so once again. I needn't resort overly to my normal, tedious explication. In general, I am often conflicted over my b&w conversions. I often hmm and haw over which version I like best — colour or mono — and can seldom make up my mind. 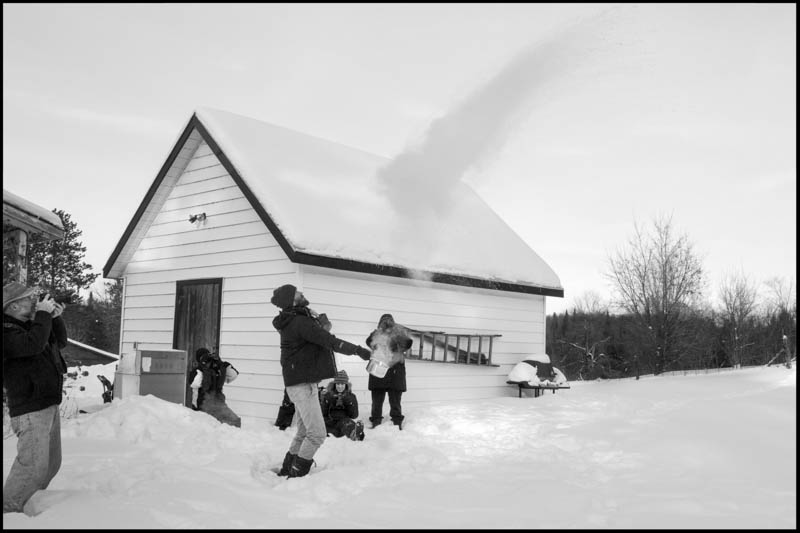 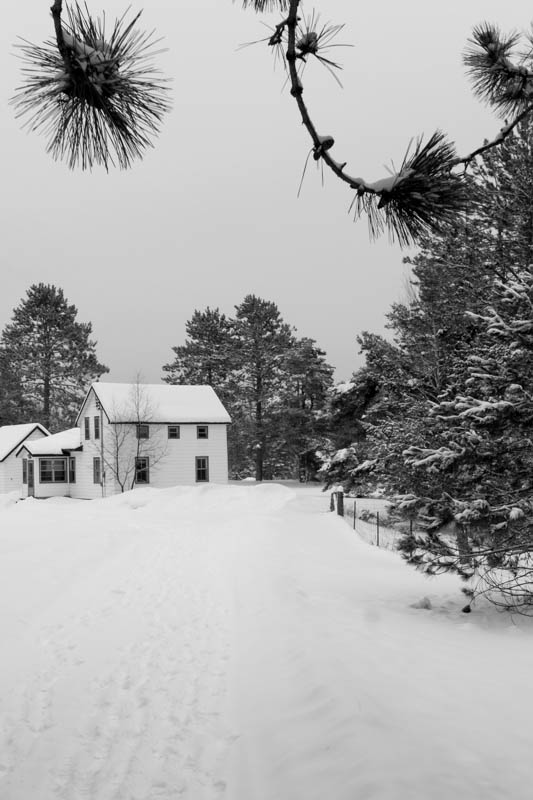 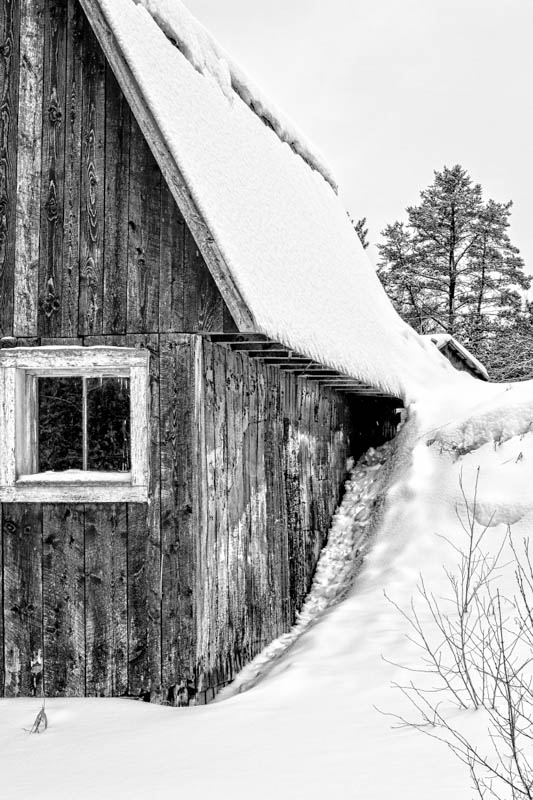 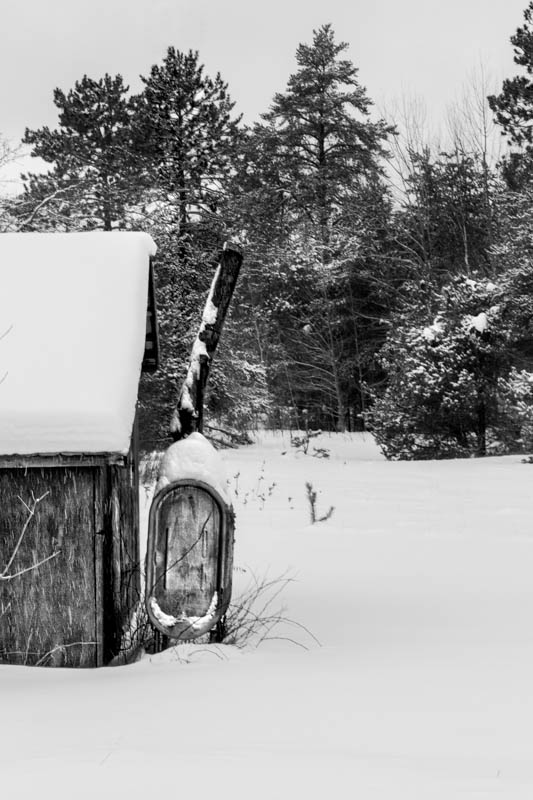 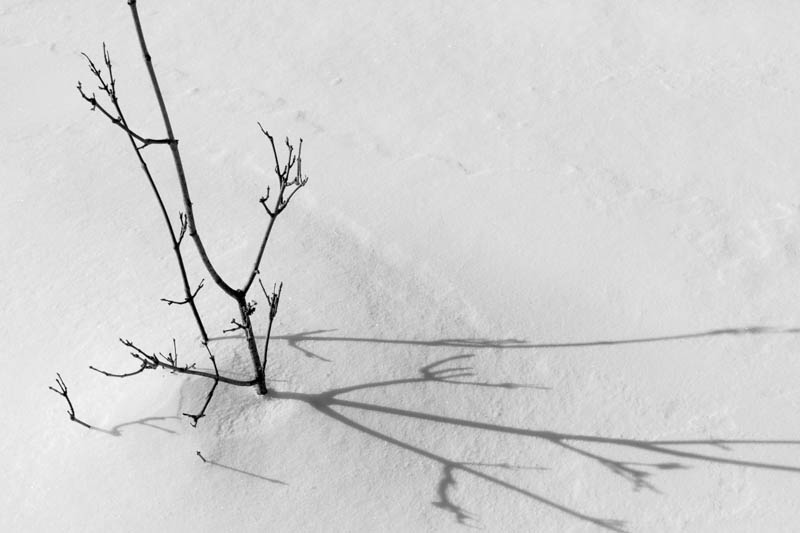 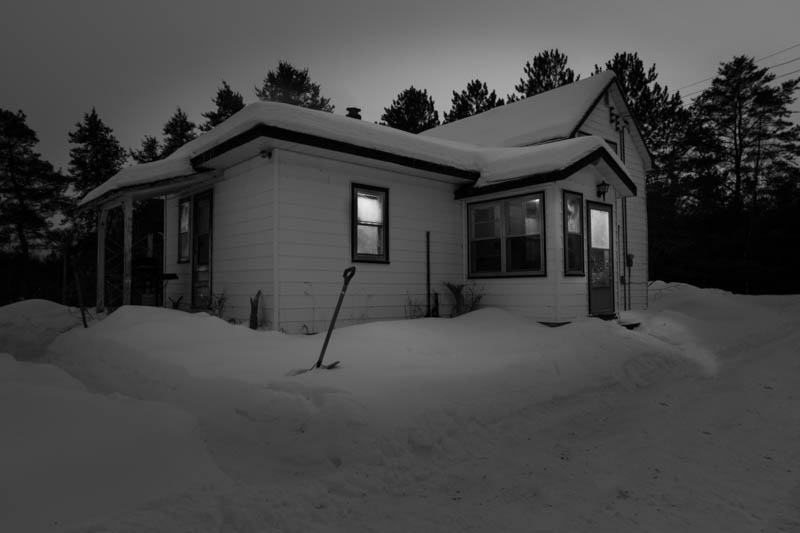 Finally, I have two versions of a photoshopped version of the stairs. My intent was to make the stairway look sinister. You must tell me if either worked and which of the two you like best (or least). I did much more distorting in the first than the second, but I think the second might look spookier. 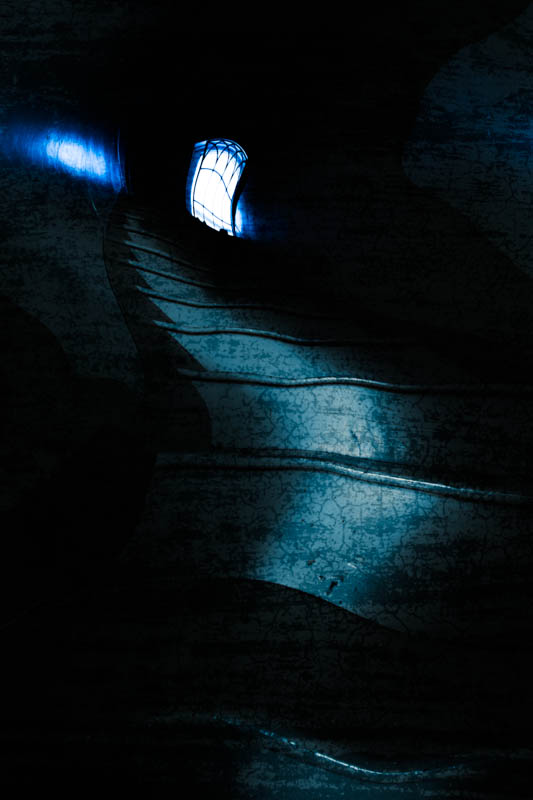 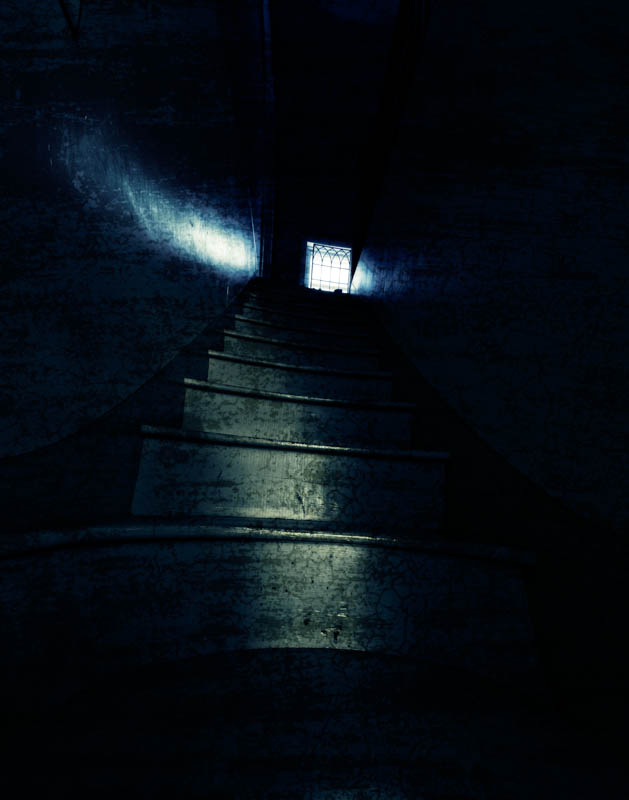 What will I ever think to post about when I am all done with cottage photos? Time will tell.

Today, I bring you little things. My photographic inclination is to shoot scenes, and I often overlook the smaller things in life. Sometimes however, I do remember, so here we go.

These are self explanatory, not requiring explanation. 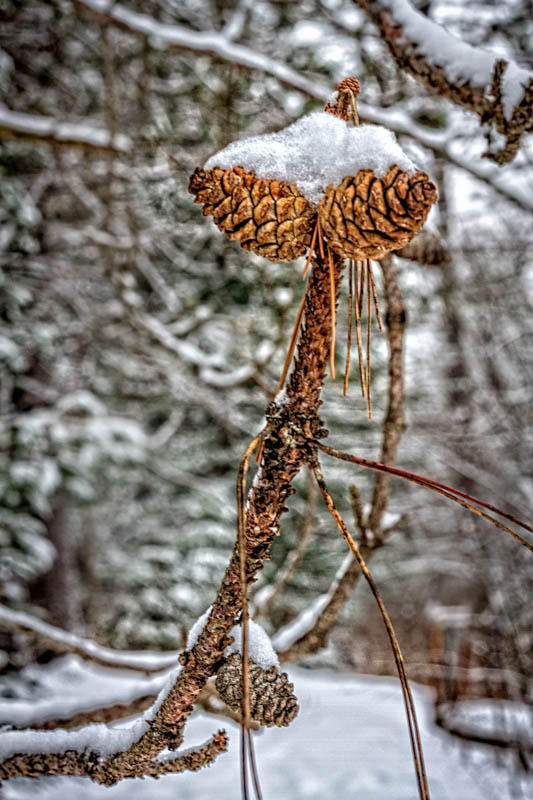 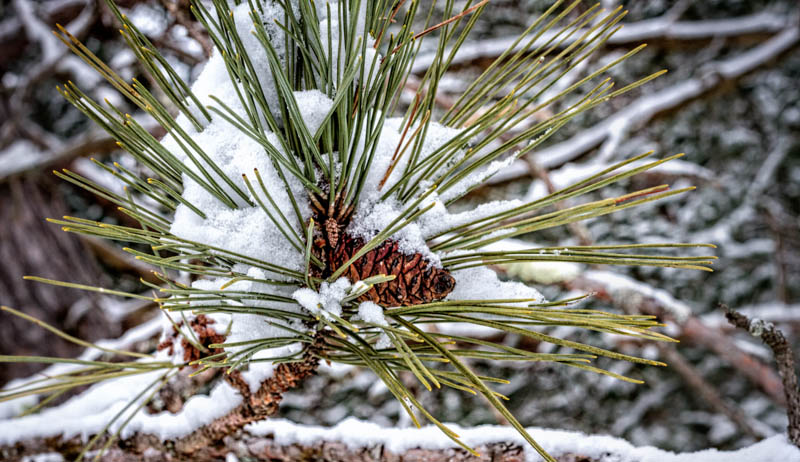 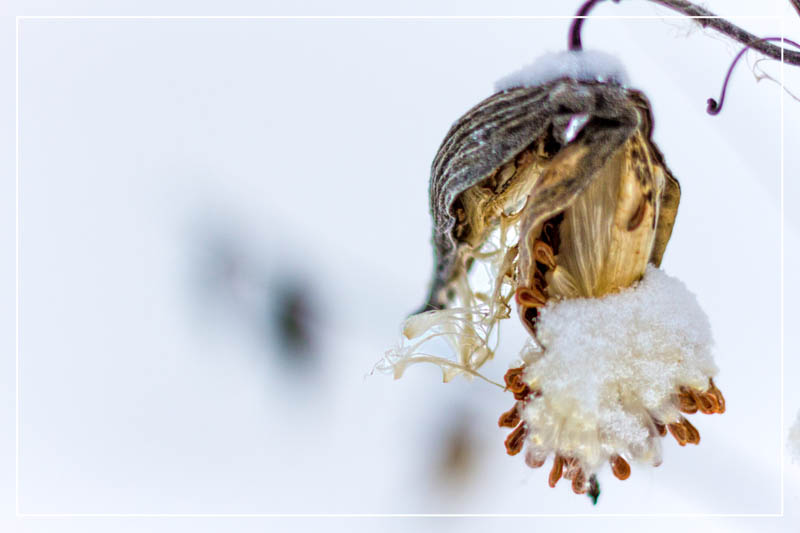 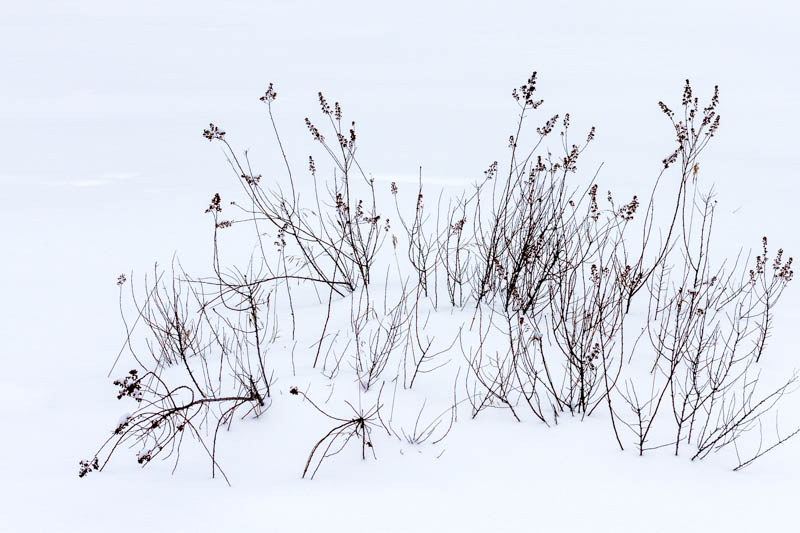 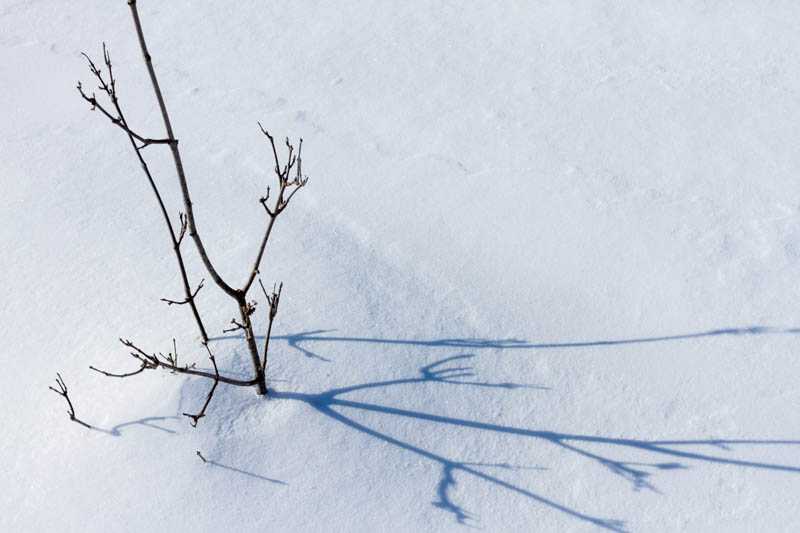 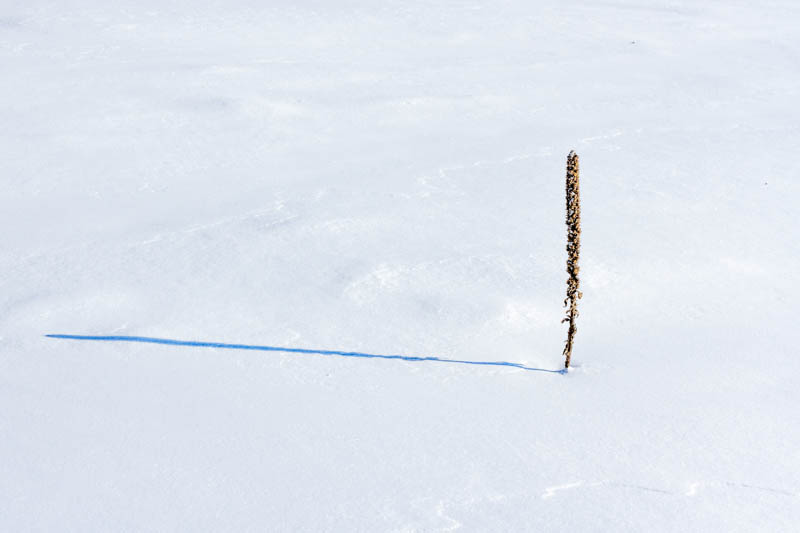