And So it Goes

We are on Day 7 of our 10 day stint: four days (including today) and three nights to go — not that we are counting or anything. She's at school and he's off to daycare today and tomorrow, so this is my chance to catch y'all up to date with pictures. Actually, I've been doing well with getting pictures on Facebook, and there's more there if you care to click but I uploaded quite a few below: following in random order.

And So It Begins

We are on the third day (second full day) of our ten day stint with the grands.Here is a brief update form Day 2, Saturday.

After the Tree Trimming 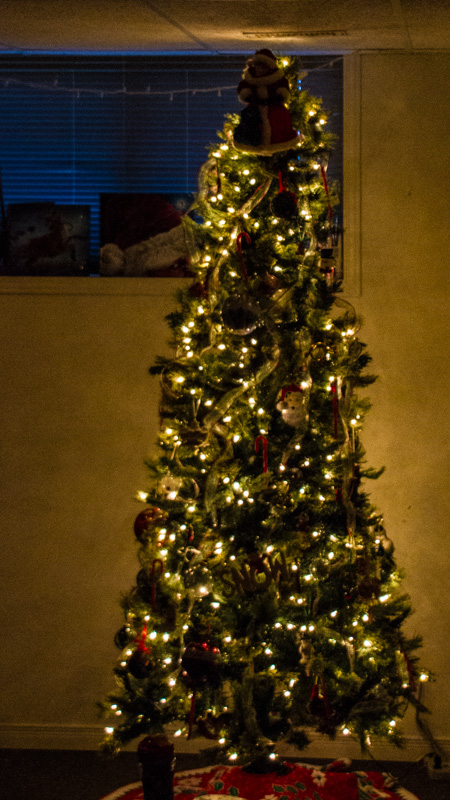 The tree was trimmed, so what next?

There was much playing and hugging. 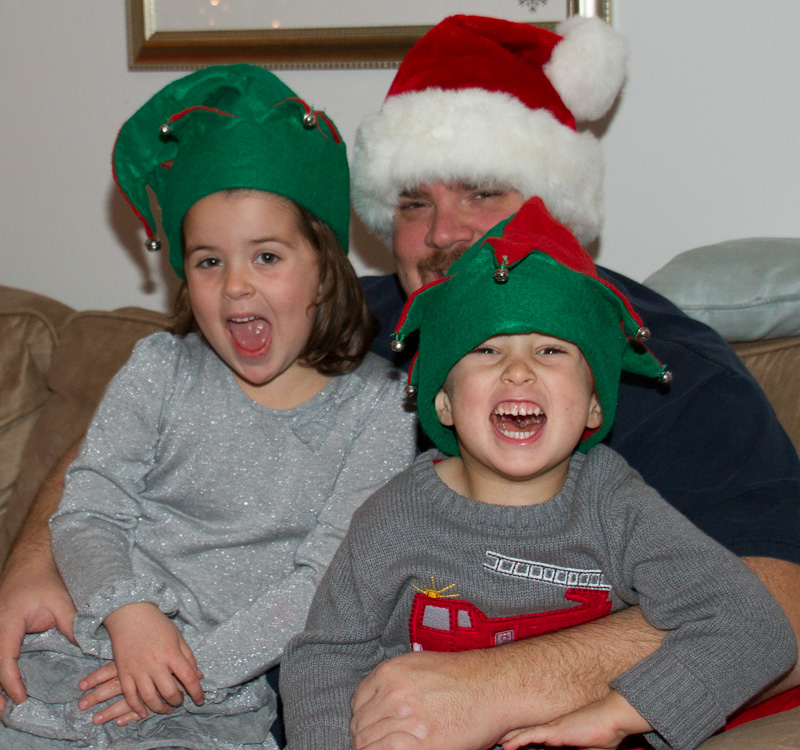 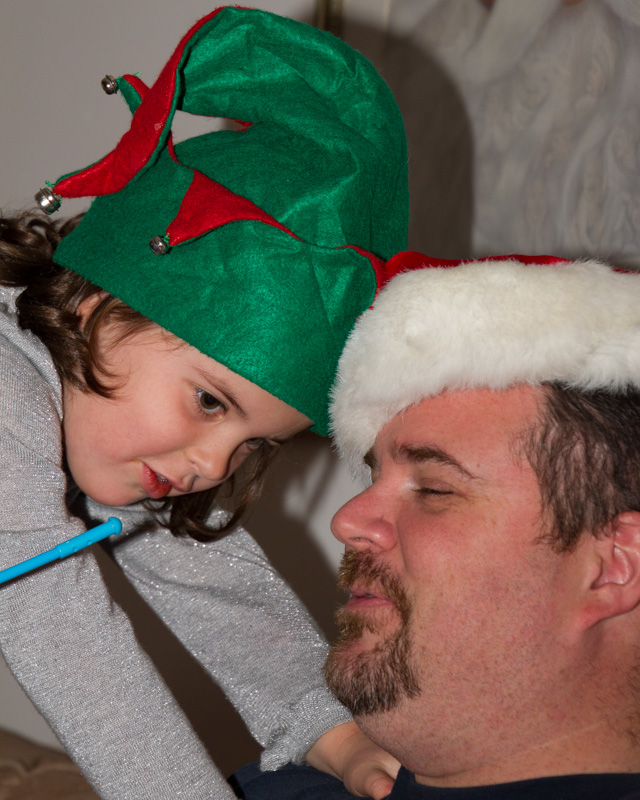 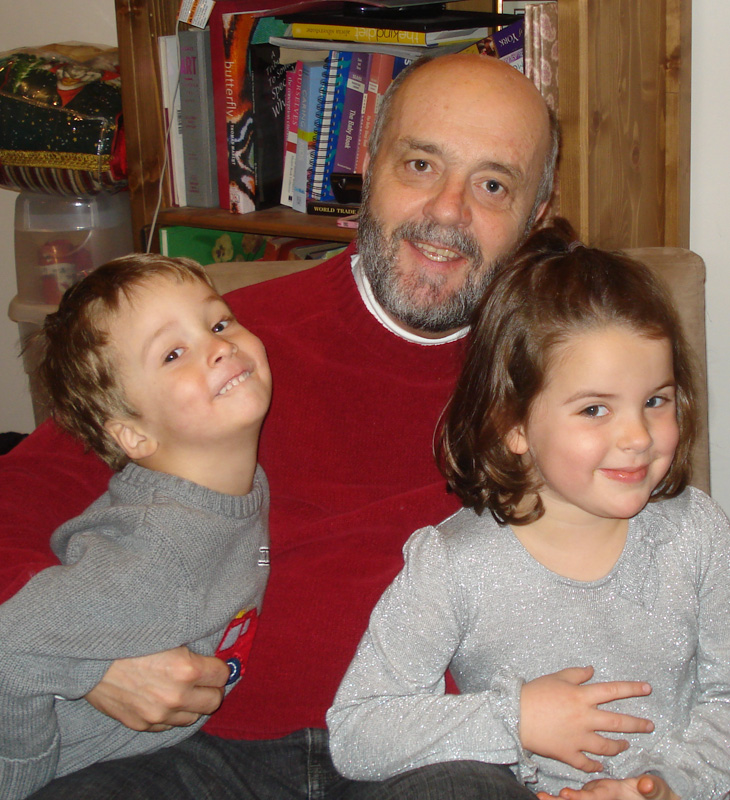 The kids were read a bedtime story. 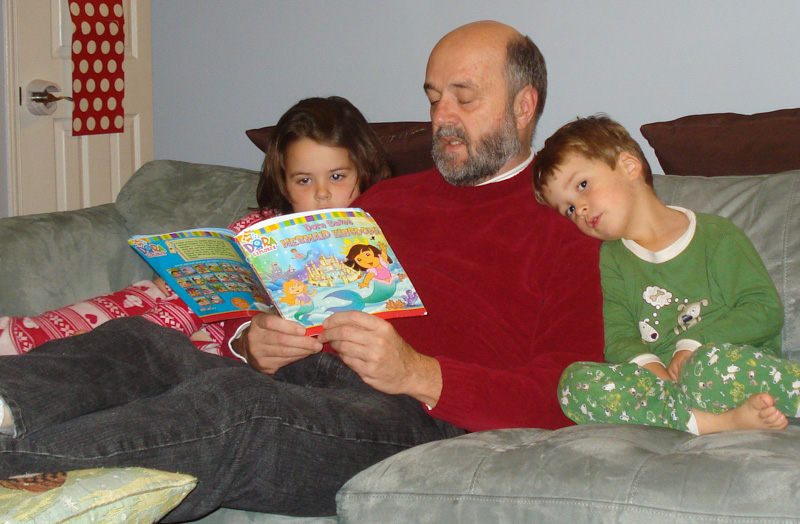 And we began the Santa watch. 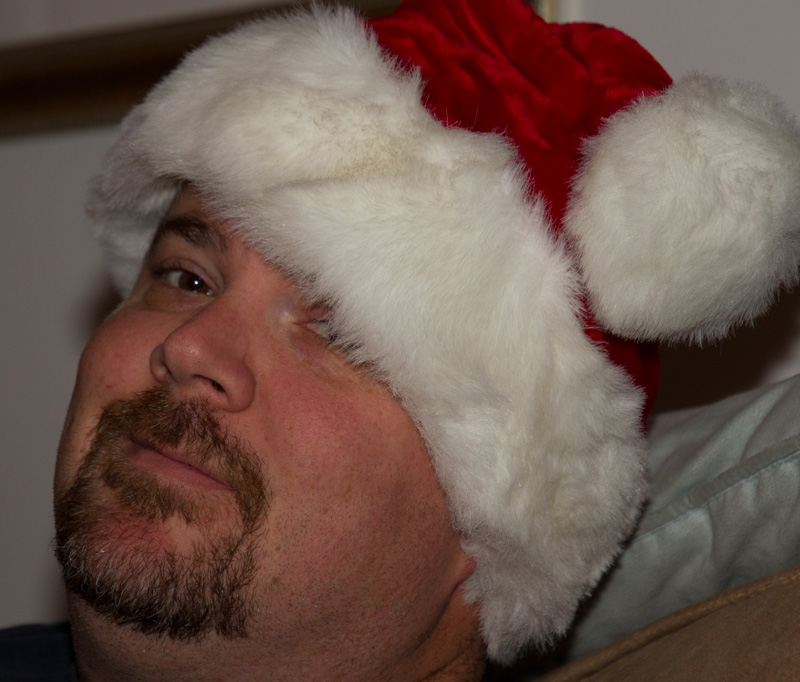 I blog and post pictures of our family tree trimming gathering every year, so this year for a change is no different.

We got toegther at Sha's place a week earlier than usual this year because she and Eric are off for a weeklong cruise. Guess who will be babysitting for ten days? Guess who may lose their precarious hold on their sanity?

Here are some pics from the event.

In the Leaves Again

Last year around this time, I took the kids for a little tromp thru the woods behind their house. We found quite a pile of leaves, and I had been keeping it in mind to look for them again this year. We took Danica out of school and JJ out of daycare early on Thursday so that we could take them in for their flu shots. They were both quite heroic about their shots, so we took them out for donuts afterward. After that,the day was still nice and we had just enough time to go looking for the leaves again before the sun went down — well before 5:00PM. We found them, and I took a few pictures — for a change.

I don't think the photos require any extra commentary on my part, except for the last one (see below). 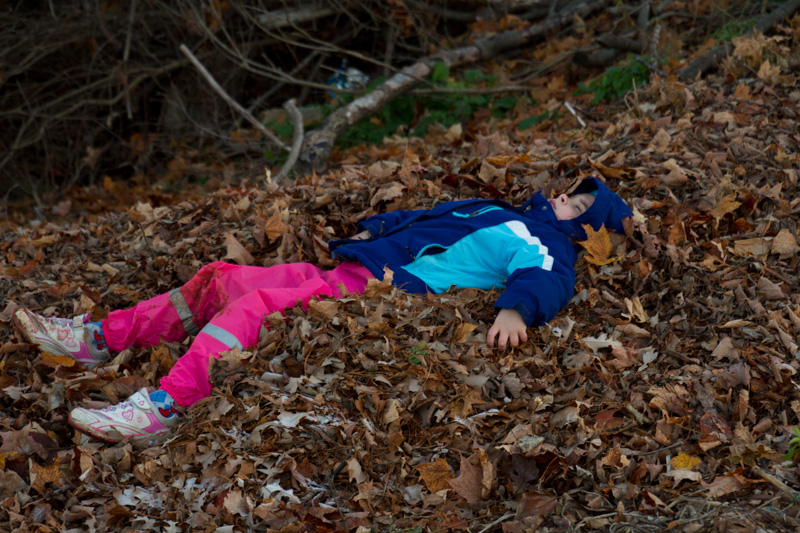 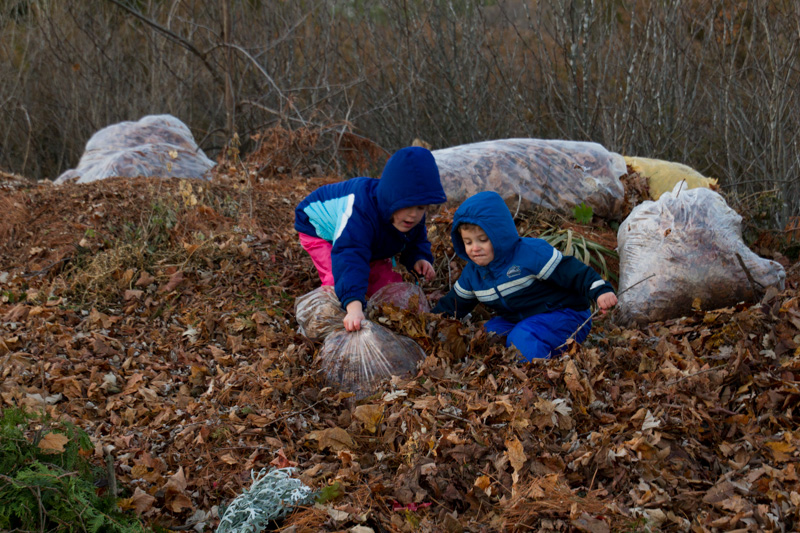 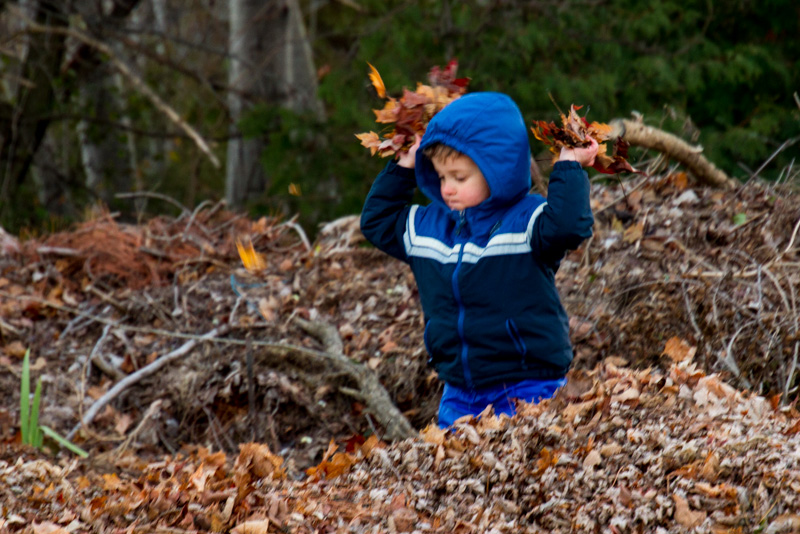 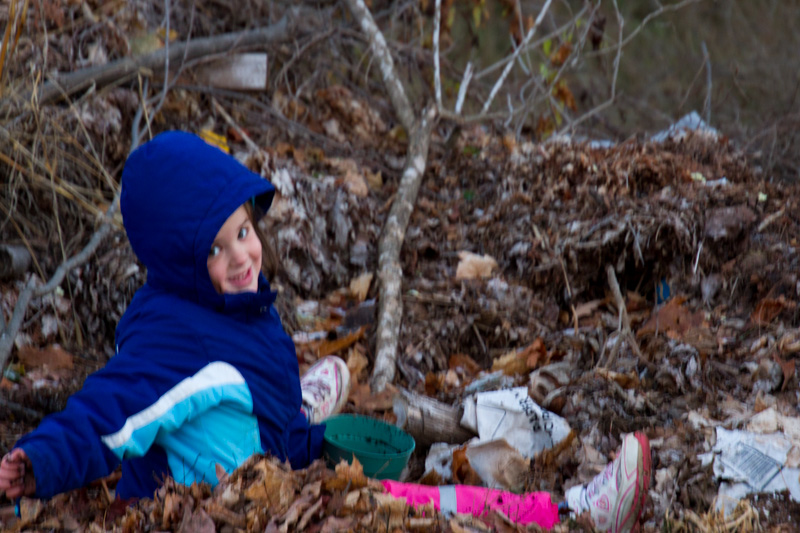 At one point in my life, I was a very strong believer. Then, I became a non-believer who was pretty tolerant of religion. Lately, more and more, I begin to see religion as a blight. It becomes apparent to me, that the world would be a calmer and saner place without clinging to ancient superstitions.

There was a time when humans were forced to invent religion to explain the universe. God was up there, just beyond the clouds, and the devil was down there, just below our feet. Eventually, we were forced to admit that both God and his adversary must reside somewhere else and that the earth was not the centre of the universe. Unfortunately however, we have never been able to throw the baby out with the tepid bathwater. We just kept modifying our beliefs in ever more desperate attempts to make them fit with science.

Mind you, many beliefs are innocuous. I mean to say, if someone wants to believe that God provides them a parking spot in their town while he lets children starve somewhere else, I guess it doesn't exactly hurt anyone. It may be inane to the nth degree, but it's most likely harmless.

However, when religionists get on their high horses and tell sexual abuse victims that they should not report their abuser, I do not find it harmless. This was apparently the case in Australia when a rabbi allegedly told the victim: "... he had invited the abuse because he wasn't religious enough." (see article in The Australian)

By now, you have all read of Savita Halappanavar who just a few weeks ago was allowed to die in an Irish hospital. Her pregnancy developed complications, but she was denied an abortion in this Catholic country even though it was apparent that the fetus would not survive. The situation was allowed to deteriorate for three days until the fetus actually died before the doctors would remove it. By then it was too late to save the mother, and Savita died. How unnecessary. How sad. (Fox News link)


I know that it's possible that if you're one of the few who stop to read this post, you will be offended by how I turn two seemingly isolated incidents into a generally anti-religionist post, but I think that they are indicative the danger of the religious mindset. In both cases, religion intervened in an inappropriate manner. In one case, it protected a criminal pedophile while casting guilt upon the victim. The other case resulted in needless death. These are micro cases, but on the macro level, religiously motivated terrorism goes on and on, and political tensions, partly induced by religion, escalate into threats of war.

I think we'd be better off without religion.

It never changes. We had another busy morning with more climbing. After this photo she managed to get right onto my shoulders. We do have fun. 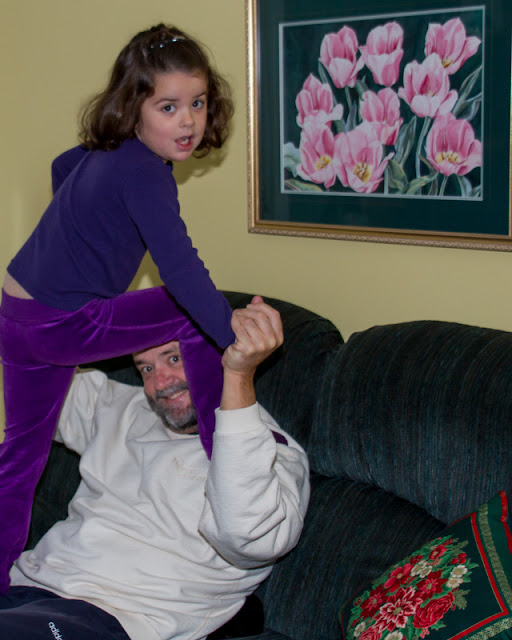 She managed to settle down long enough to read me a story. Yes, she read to me! What's wrong with this picture? 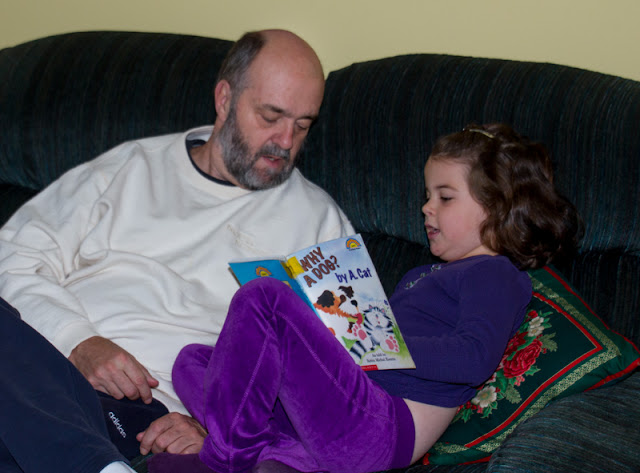 Danica is usually only here for no more than a half hour in the mornings before heading across the street to catch the bus. The following pictures illustrate what a typical morning can be like.

Squirrels in the Park

It was record-breaking warn yesterday, so Sue and I went for a wee stroll in the park. Aside from a million geese, I followed a squirrel with my camera. Suddenly, there were two squirrels in the frame.

I Just Don't Get It

I read a blog a few days ago of a blogger I respect. She stated that morality concerns were an important part of whom she supported in the recent American elections.

Of course, this set my wheels in motion, and what strikes me deeply is that for most people, morality comes down to just a few considerations: namely, sex, abortion, and perhaps drugs. I could go on to write at length about those issues, but they would simply be my opinions that  would be arguable. No, what I wish to highlight today, is my perplexity over how most people tend to selectively limit their concerns about morality.

Personally, I don’t see Christians’ great anxiety in areas of sexual morality being transmitted to other areas of morality, and I find this most troubling. There are ten commandments, for example, and aside from adultery, none have to do with sex. There are prohibitions against lying, murder, idolatry, stealing, blaspheming, sabbath activities, and coveting, but somehow or other, these are not of great concern to the majority of moralists.

I want to know why does sex become, for hordes of people, the single area that defines morality. It doesn’t make sense to me. It seems to me that the vast majority of Christians pick and choose their moral concerns very selectively and easily push to the back of their minds and tend to excuse all sorts of other moral issues.

Our most famous but not always beloved politician of the modern era, Pierre Elliot Trudeau, once declared, "There's no place for the state in the bedrooms of the nation," and I'm afraid that I am forced to agree. Whom someone sleeps with affects me not in the slightest, but I may be affected tremendously by their lying and stealing, for example.

So, as in most things in this old world, what I am saying is that I just don’t get it.

In honour of Remembrance Day, I present this photo of three tombstones bearing poppies in our local cemetery. The red hat is mine. I just think it adds a touch and it's colour goes with that of the poppies. 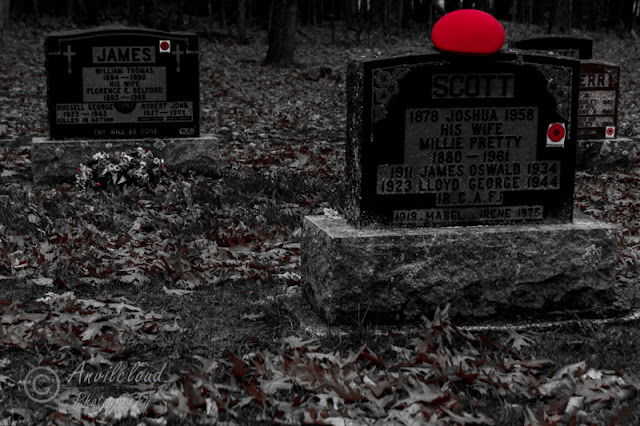 In Flanders fields the poppies blow
Between the crosses, row on row,
That mark our place; and in the sky
The larks, still bravely singing, fly
Scarce heard amid the guns below.


We are the Dead. Short days ago
We lived, felt dawn, saw sunset glow,
Loved and were loved, and now we lie
In Flanders fields.


Take up our quarrel with the foe:
To you from failing hands we throw
The torch; be yours to hold it high.
If ye break faith with us who die
We shall not sleep, though poppies grow
In Flanders fields.

Perhaps the most touching song for this day in The Band Played Waltzing Matilda. It was written by an Australian but is sung by Canadian, John McDermott, in this clip. I think it will will touch you, if the song is new to you, or even if it isn't.

On Halloween, in the calm after the storm when the kids were back from their trick or treating, I donned JJ's Spiderman mask for a lark.


Then Eric found Jonathan's other mask as well as his Hulk gloves. 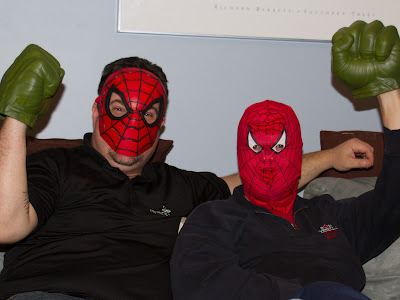 All went well for awhile. 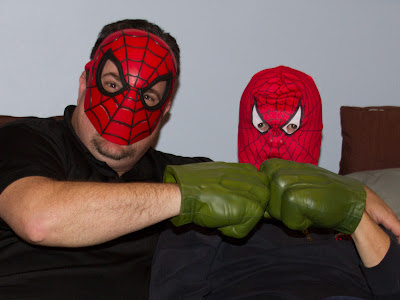 Until the elder abuse started. 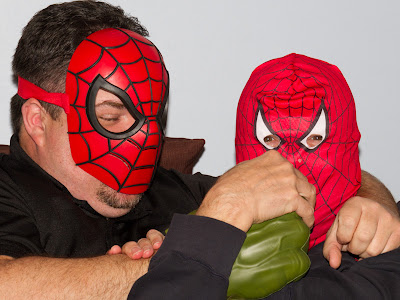 You are my witnesses. 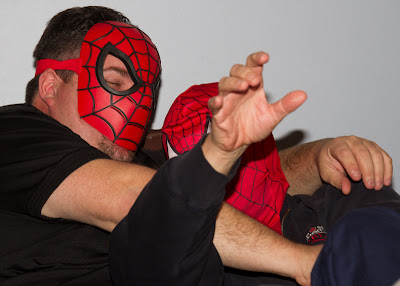