The Champion in a Slideshow

I hadn't intended this, but it is a slideshow of the photos from the previous two posts plus one or two others. There is a new version of Lightroom that has an updated Slideshow feature, and I decided to experiment with it.

It enables one to make a slideshow plus music in minutes. It is not high end with  lots or bells and whistles, but it does have crossfades and pans, so it is quite functional. The main thing is that it is easy; if you have this version of Lightroom, you can put a decent slideshow together in no time flat. (There was a SS module in earlier versions of LR, but it wasn't terribly good.)

The new Lightroom is either version 6, which is a one-time purchase, or CC which is a $10US monthly rental. The advantage to the rental version is that you also get Photoshop for that price, updates as soon as the are ready to roll, and Lightroom Mobile for your portable devices. You will not receive significant updates to LR6, and it may be two years before there is a LR7, assuming that there ever is a version 7 and they don't switch to the rental model entirely.

Anyway, here is the slideshow that was generated. Depending on how you are set up, you might want to lower the default volume. You can also click on YouTube at the bottom right to see it larger or even in full screen.

Great photography has always been a product of both shooting and developing. This was true long before Photoshop; cropping, dodging and burning were always part of the process.

So, after your Work the Scene, you need to consider Working the Darkroom, which, of course, has gone digital.

Some photos just require minimal processing. For example: a RAW photo can almost always do with a little sharpening and boost in contrast. Sometimes, your vision may require maximum processing with much filtering and processing.

As in Working the Scene, you may not know what you will like best until you have Worked the Darkroom.

You saw my shots of the heavy machinery shots in the previous post. They were all exposed to the darkroom in that post, but in a basic way. So, I took my experimenting further.

One obvious way to experiment is by converting to monotone or duotone. In each case, I may end up preferring the original colour but not always. Colour versions of the first three images all appeared in my previous post. 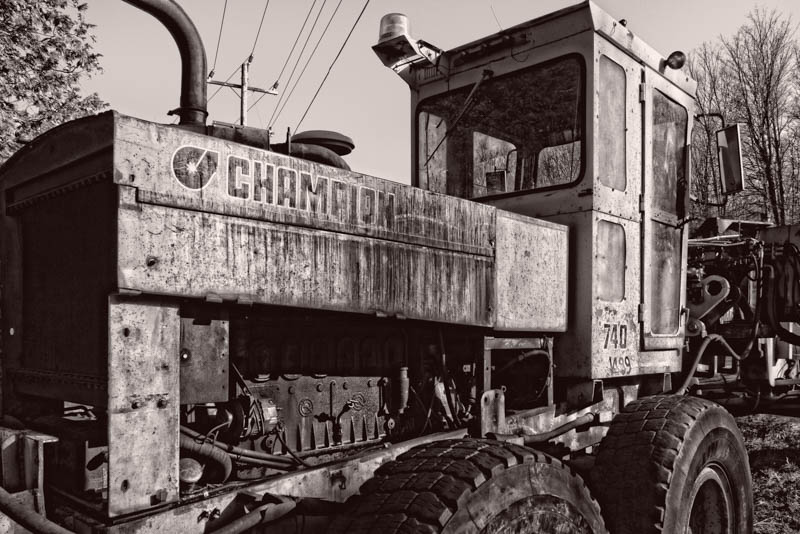 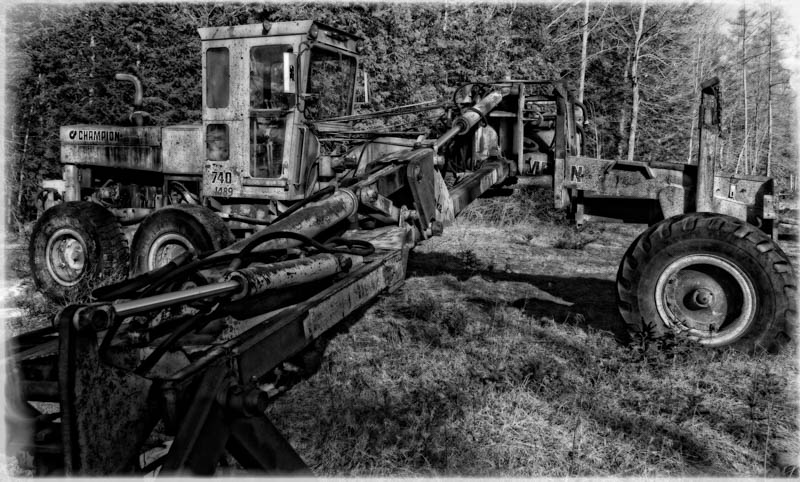 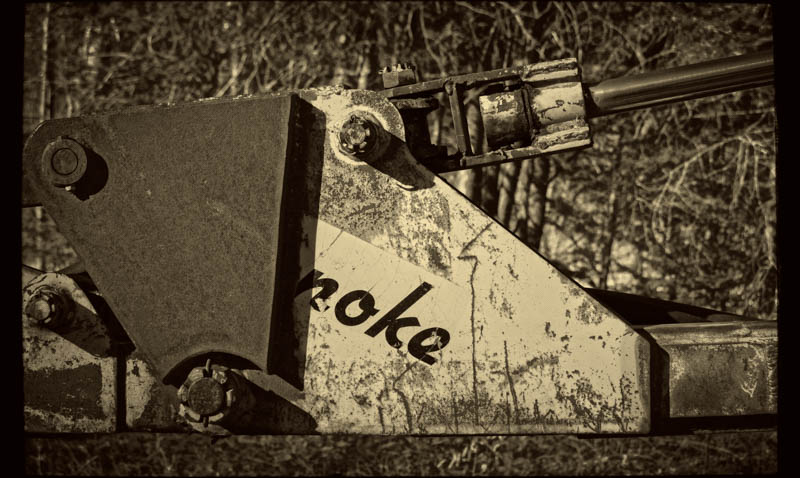 I went off the charts a little with the next two photos. I don't have a fisheye lens, but I was able to produce a somewhat similar effect in Photoshop. (A more standard version also appeared in the previous post.) 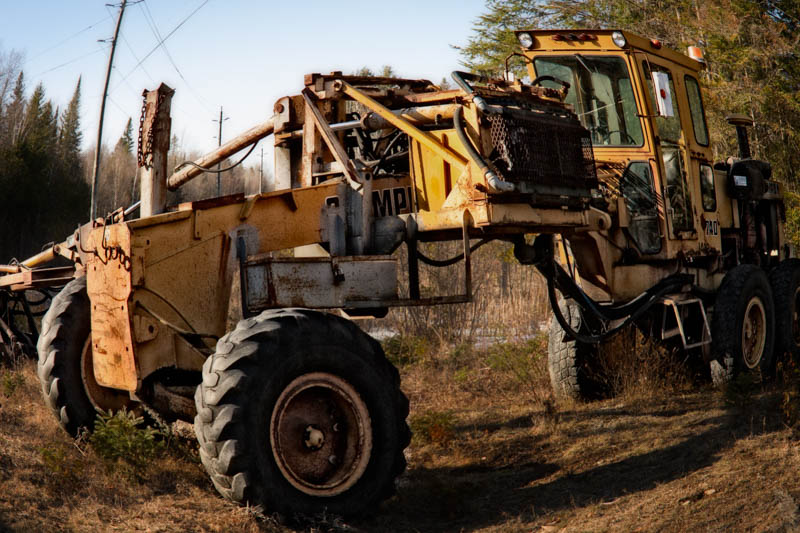 In this second example, I went for more of a vintage look complete with lens flares. I did not include this two shot in the previous post. 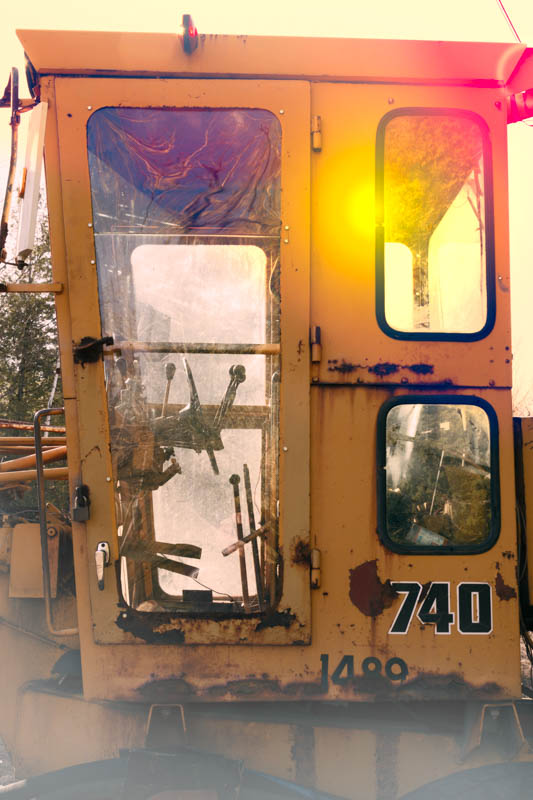 Finally, just for giggles, I did an antique look. While I did it just for fun and for example, I quite like it and just might put it near the top of my preferences. You just never know until you try. 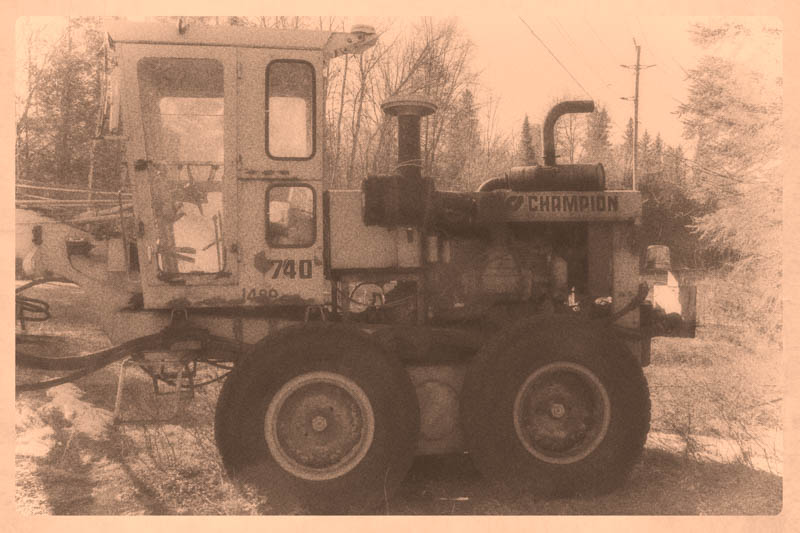 I know this might sound overly pedantic and as if I think I am any good at all of this stuff, but it's just a hobby. I don't mean to lecture anyone; I am just putting some of my practices to words. I don't claim that any of the photos from either post are any good. I'm just exploring and putting it out there for what it's worth. Which is probably not very much at all.

It's good idea to get out of the, Take one shot and make one final product frame of mind. Mind you, I still do that quite a lot, but sometimes I also like to slow down and experiment.

Edit: Oops, I almost forgot to include the diptych as yet another viable alternative. You've seen it before, but here it is again, just as a reminder because it fits with this post. 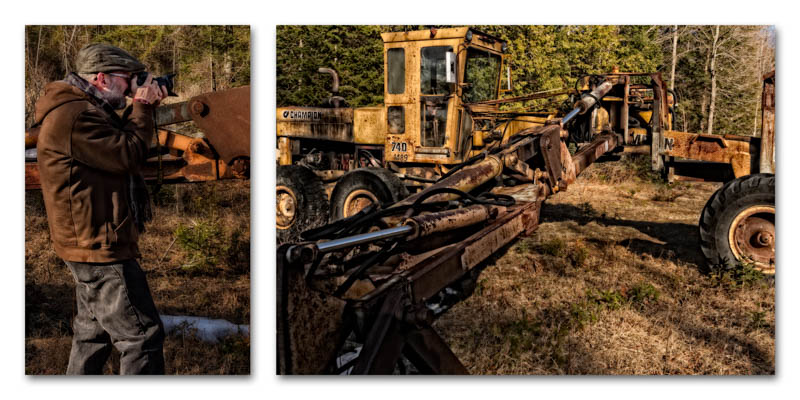 One of the lessons that I try, sometimes in vain, to remember when I'm out with my camera is to Work the Scene. Like many, I must fight the tendency to look at something, grab the first shot that I see, and walk away, saying "Got it."

And I certainly might have it. But the first shot that looks so right might not be the one that really speaks to me once I take a few and look at the results.

When Brian and I encountered this piece of heavy equipment, we both moved around, shooting from various angles. 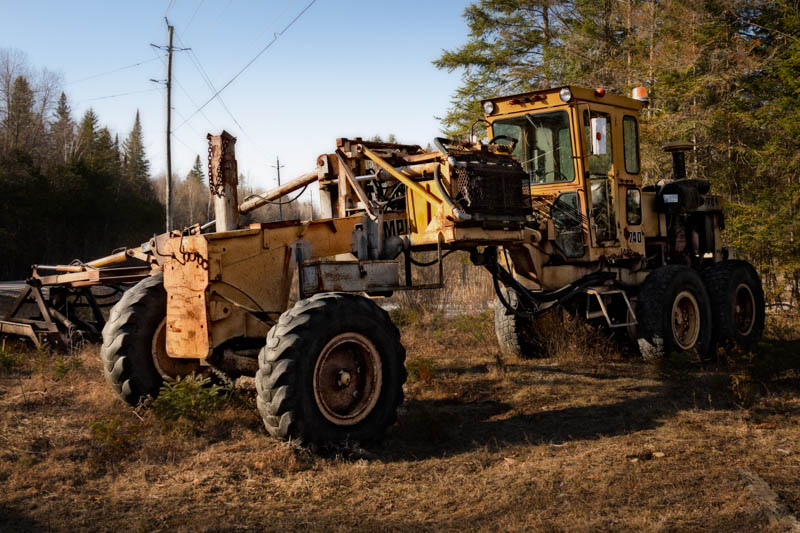 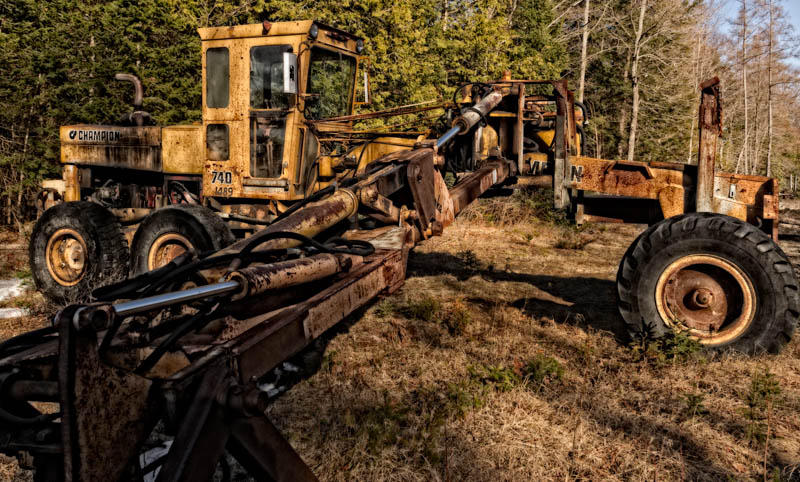 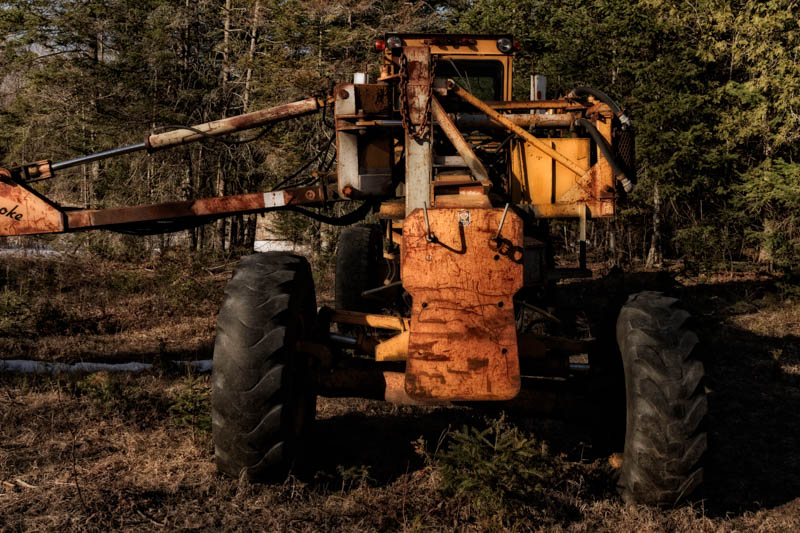 Then we shot from varying distances. 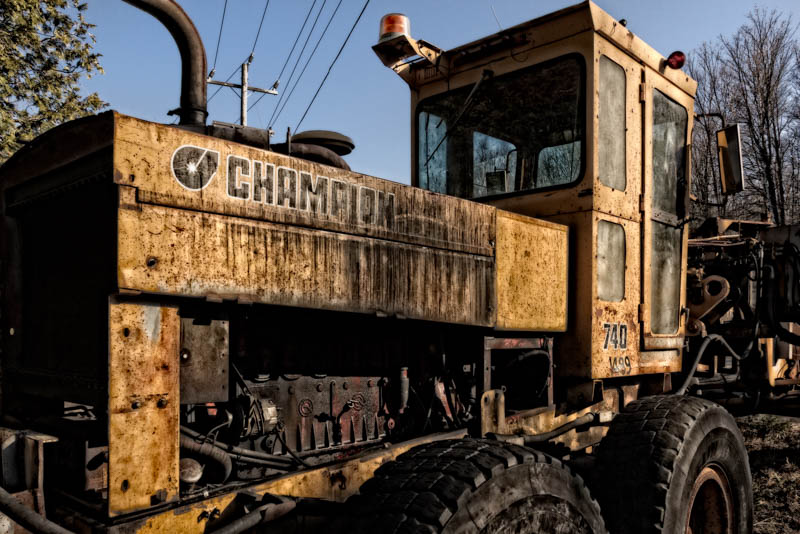 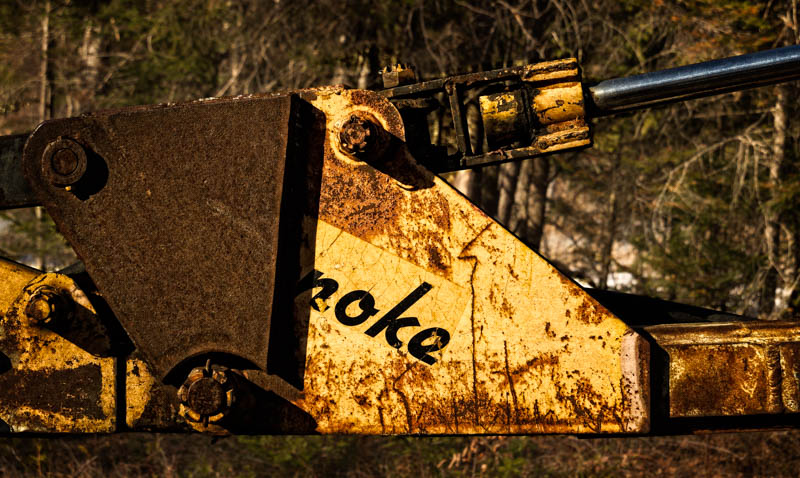 I also shot some of Brian doing his thing. 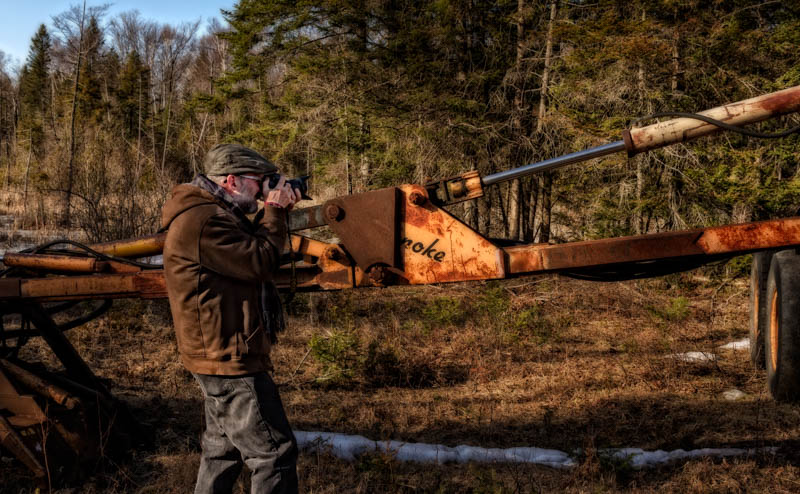 That gave me a nice variety from which to choose. I actually took more shots than these, but these are the ones that I liked best, and I likely missed many that Brian saw and took, for we all see differently. It's a good idea, however, to take your time and force yourself to check out various views.
Posted by Anvilcloud at 7:30 am 6 comments:

Sunday was a big day for Danica. Not only was it First Communion, but it was also her birthday.

These first two photos show her reaction to the inside of my homemade card, which I showed you previously. I am sure that you prefer not to link back, may I just remind you that it included a picture of panties on her head. 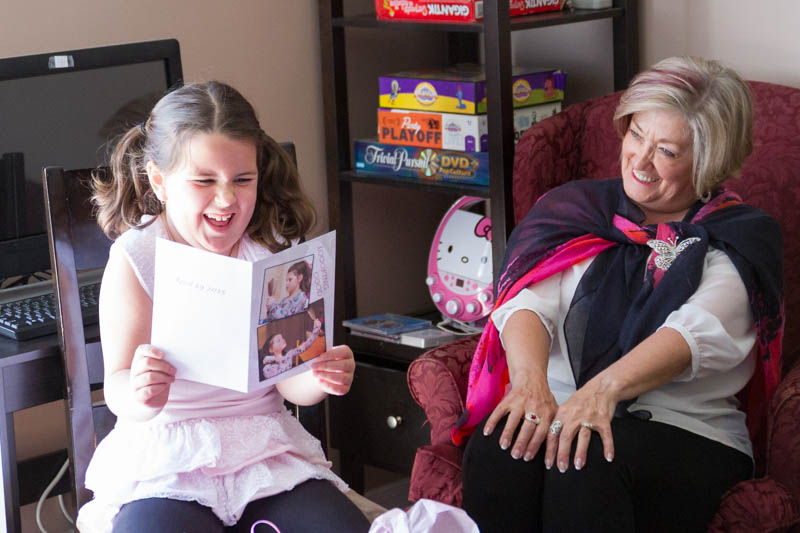 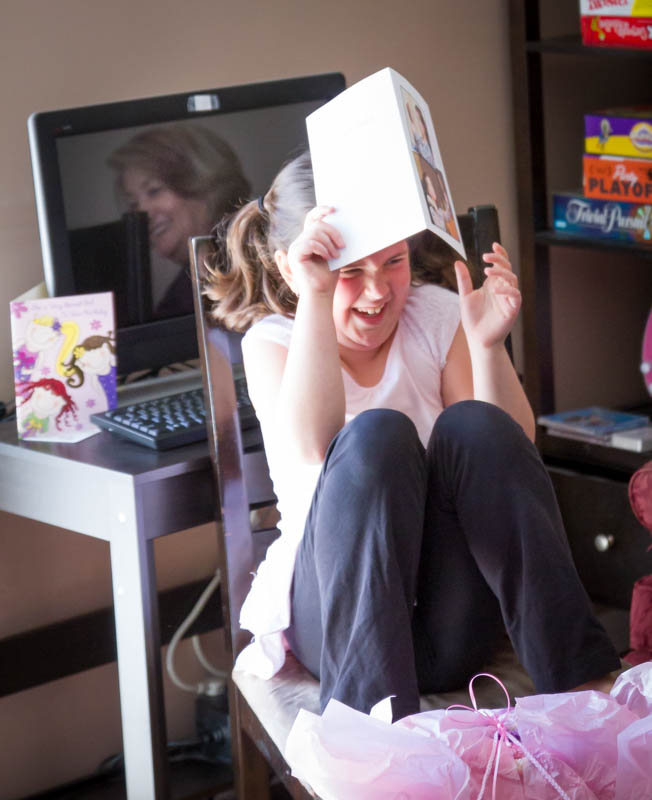 Aside from the fantastic afghan that grandma crocheted for her, her big present from us was a brand new bike. In the first picture, she sees it for the first time. 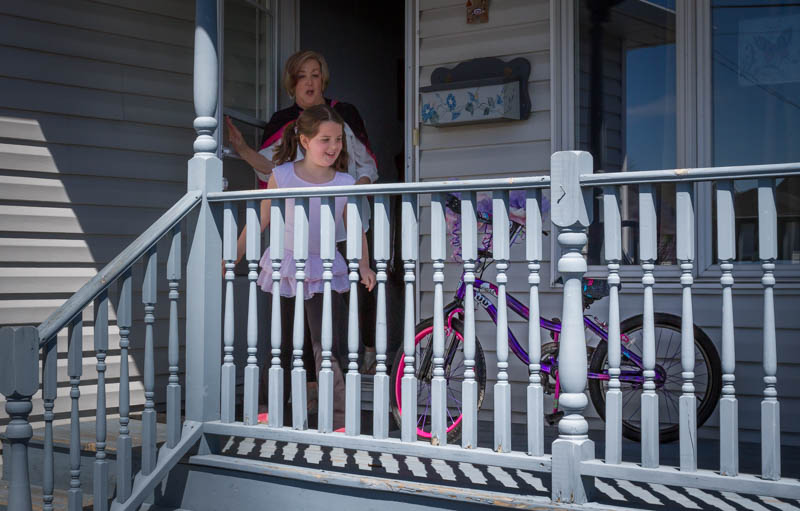 And then she took her first ride. 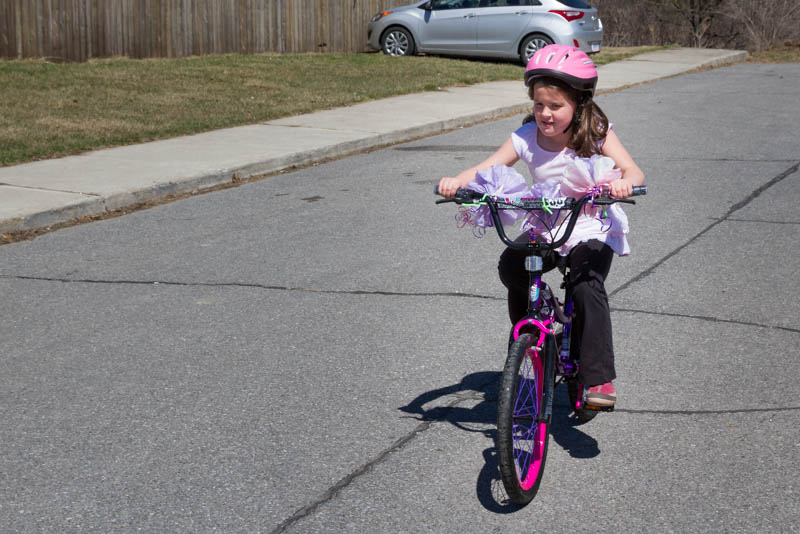 A pose: note the pretty bows that granda attached. 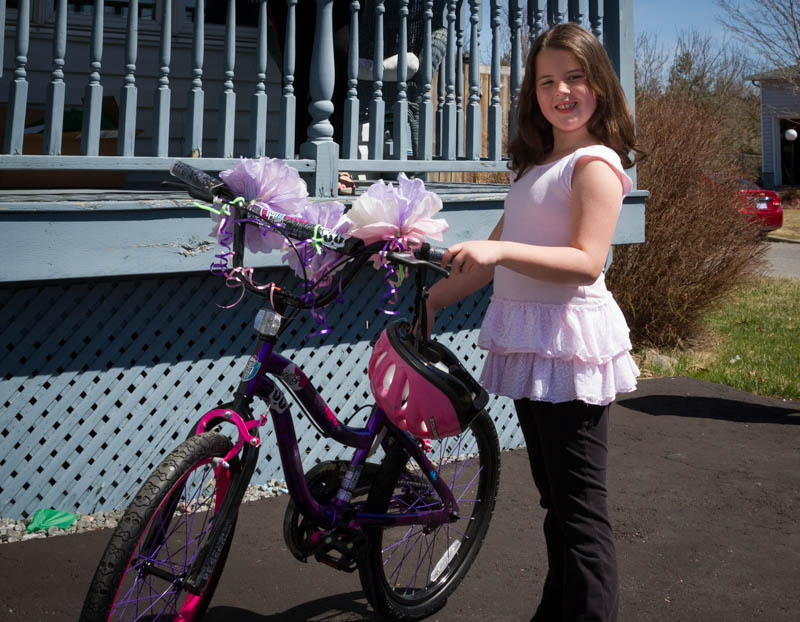 Finally, the blowing of the candle. 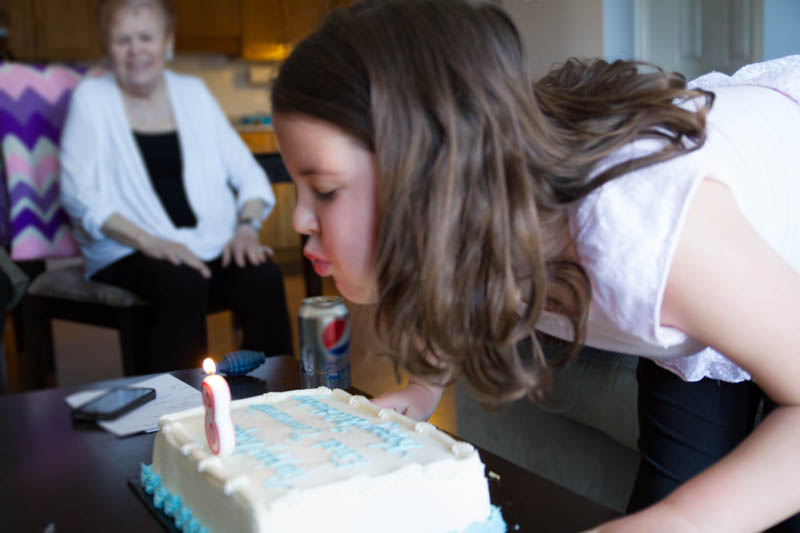 Danica had her ceremonious first communion on Sunday. This was somewhat troubling for an atheist grandfather, but one tries to be supportive. As her mother said, we all (in this family at least) got over our indoctrination, so in time she might as well.

Edit: So odd that I pre-posted this not realizing that today is Openly Secular Day, and here I am identifying as being an atheist, not that I've ever hid it, but I don't generally trumpet the fact. It is a day to tell someone, and I guess I just did that in spades. :)

More Diptychs from a Dipstick

I have done some more experimentation with diptychs. I think the pair can tell a story that a single photo might not. Once again, I have previously posted some as standalones.

In this first ↑ we see the whole machine and Brian taking a picture of it.

Later, we saw a very unusual sight: a truck embedded in the face of a rock wall. ↓ 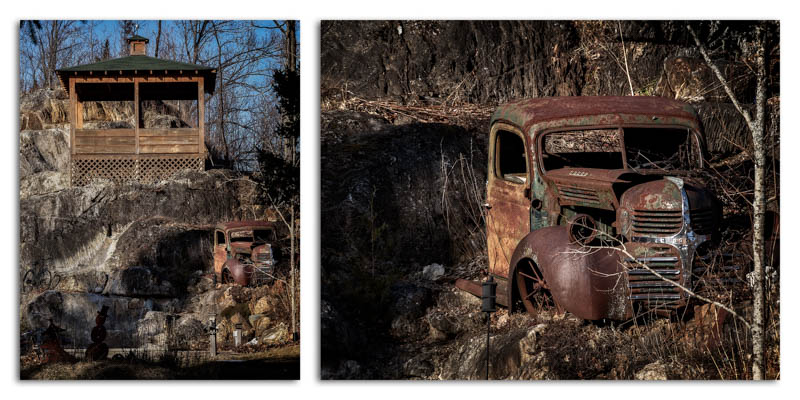 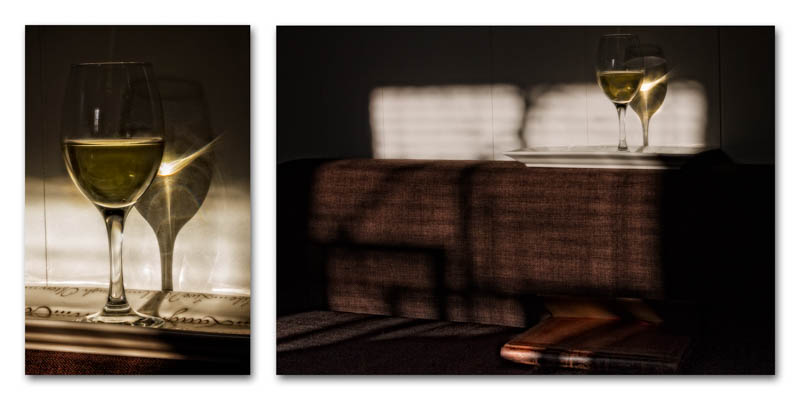 Heather noticed the light shining through her wine glass and thought it would make a nice photo. ↑ On the right side, I included her journal which lay underneath on the couch.

I showed this sign melange previously, but I thought I would add a closeup of one of the clusters. ↓

Brian takes a photo of an old garage ↓ and a closeup of the weathered wood in the same garage. 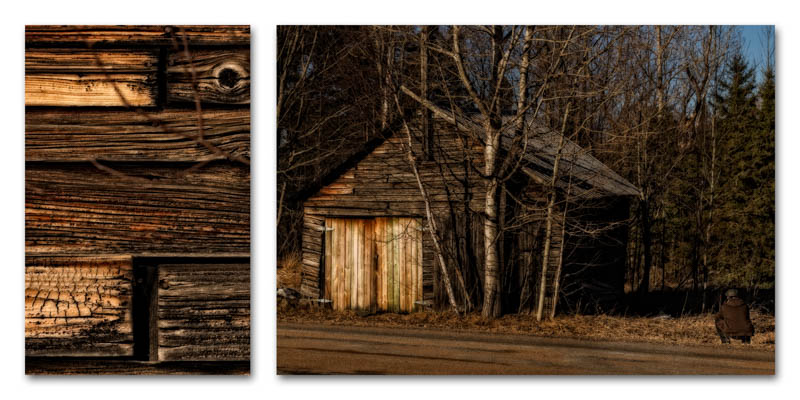 It's a special day today; the girl celebrates the completion of 8 enthusiastic years and looks forward to a 9th. I still remember her greeting bellow all those years ago as she entered the world as well as a few nights of rocking the baby whilst mom gathered what sleep that she could. Those were precious moments; I'm so happy that I took the opportunity and the time.

It wasn't for a number of years that I took to making a collage for the kids' birthdays. The first, him at age 4 and her at age 6, featured photos from all of their years. Nows, I just use photos from the past year. I don't know how long I will keep doing this as I somehow imagine that there will be fewer pictures as they grow, but we shall see. 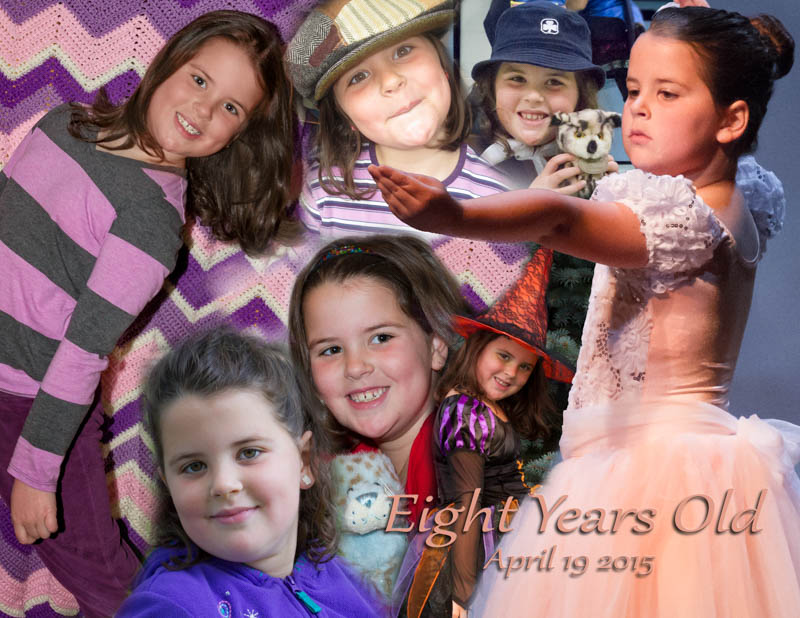 I also have been making my own cards. This is the card for this year: front (and back) first, then the inside. I used some humour on inside of this one. 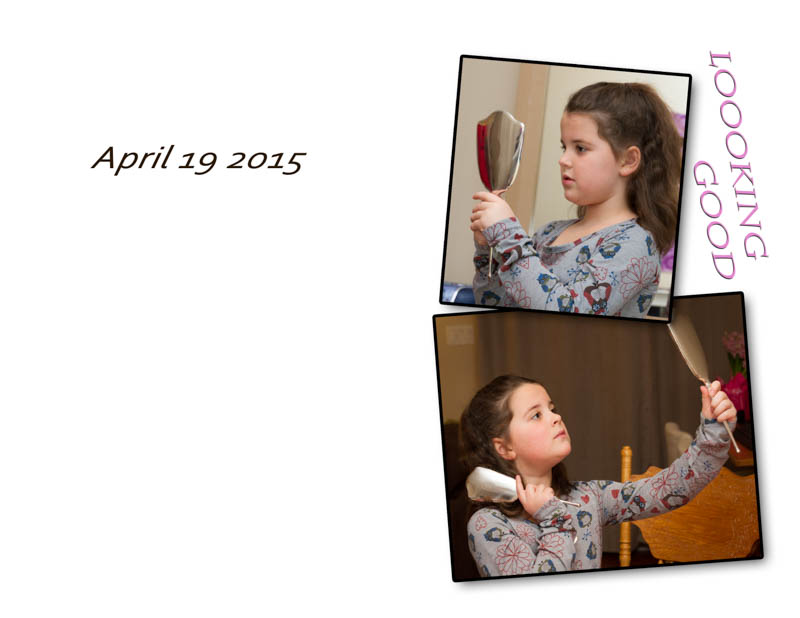 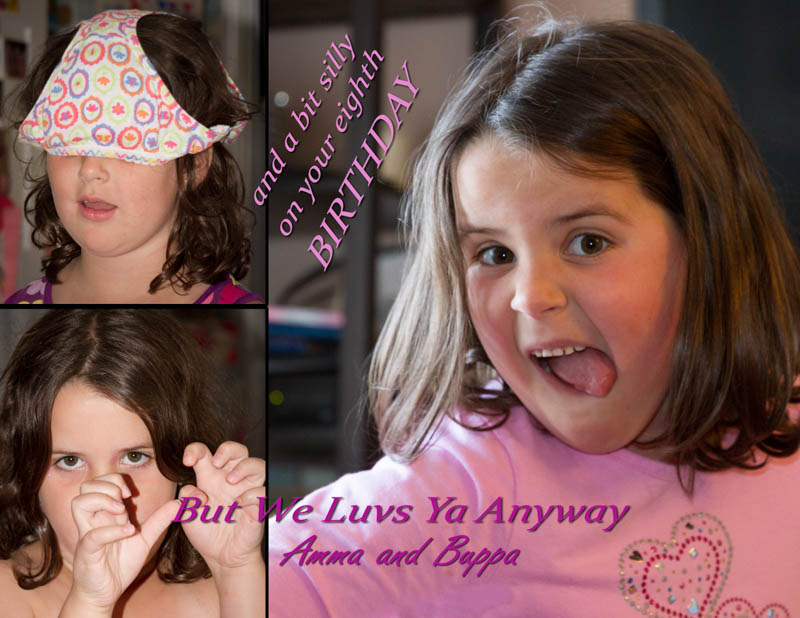 Below are the collages from the past two years. 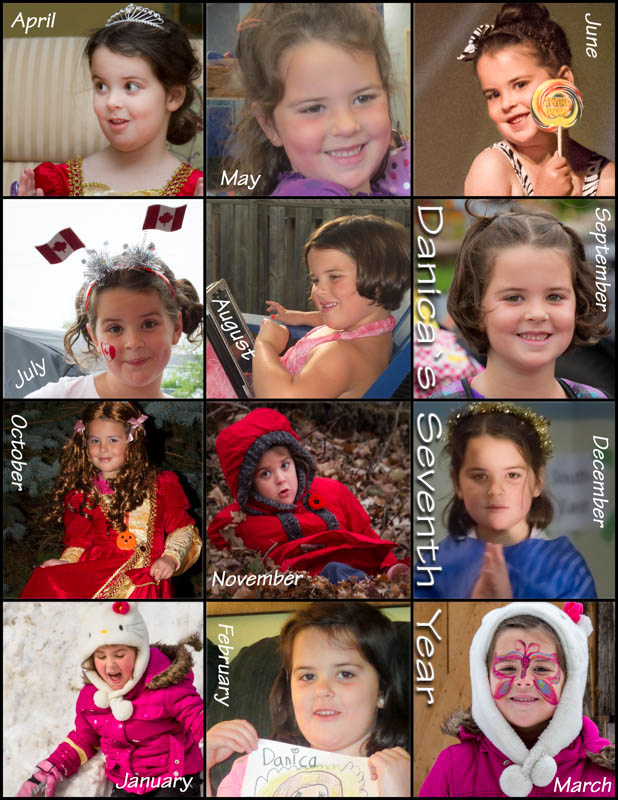 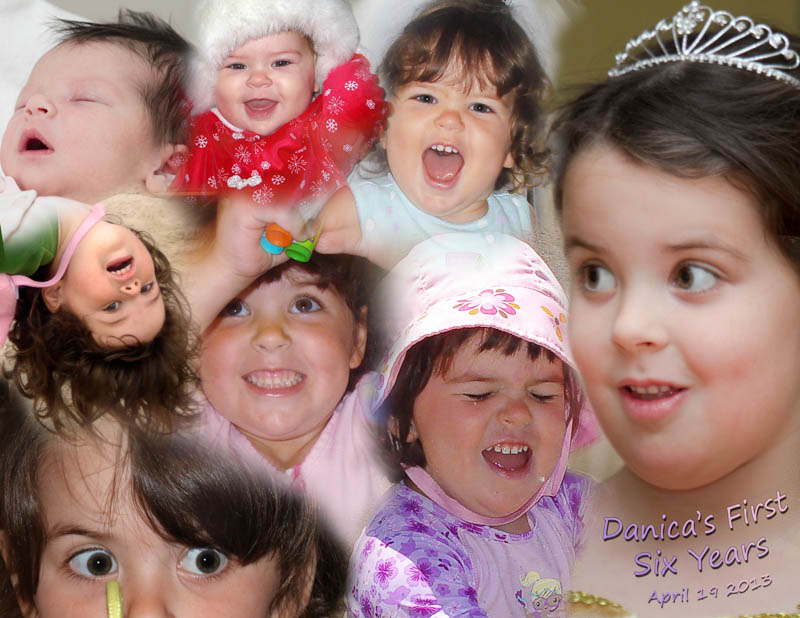 Main Entry: dip·tych
Pronunciation: \?dip-(?)tik\
Etymology: Late Latin diptycha, plural, from Greek, from neuter plural of diptychos folded in two, from di- + ptych? fold
Date: 1622
1 : a 2-leaved hinged tablet folding together to protect writing on its waxed surfaces
2 : a picture or series of pictures (as an altarpiece) painted or carved on two hinged tablets
3 : a work made up of two matching parts

"Diptychs and triptychs are a brilliant tool for photographic storytelling. They present two or three images which can be from the same session or they can be polar opposites to show opposition or contrasting ideas."

I have so many photos from last weekend, and it occurred to me to present some of them as diptychs. Of course, I have since been carried away with the notion, So here are a few with a nearer and farther theme. You have seen some of the single photos in the previous post.

Well it was a getaway for me, even if it was only a partial getaway for Sue, who had some things to attend to. The weather was spring-like getting into the mid to high teens, which is something like 60 - 65°F.

It was so pleasant to get out and take a few photos without worrying about numb fingers: just take my time setting up this and that angle. It's the little things, eh?

There were touches of snow in the woods and in shaded spots, which, I think, added a nice touch to photos that can be a bit drab at this time of year.

Brian and I took a leisurely drive on Saturday afternoon and stopped to take quite a few pictures, including the next three.


Aside from the one above, I took a few others of Brian taking his shots.


Coming home, yesterday, we stopped at a gas station in Madoc, which is ~45mins from the cottage. I was quite impressed (for want of a better word) with this signage. I have a niggling feeling that this guy isn't happy with the local politicians. Of course I could be wrong. lol I see the property is for sale. Any takers? 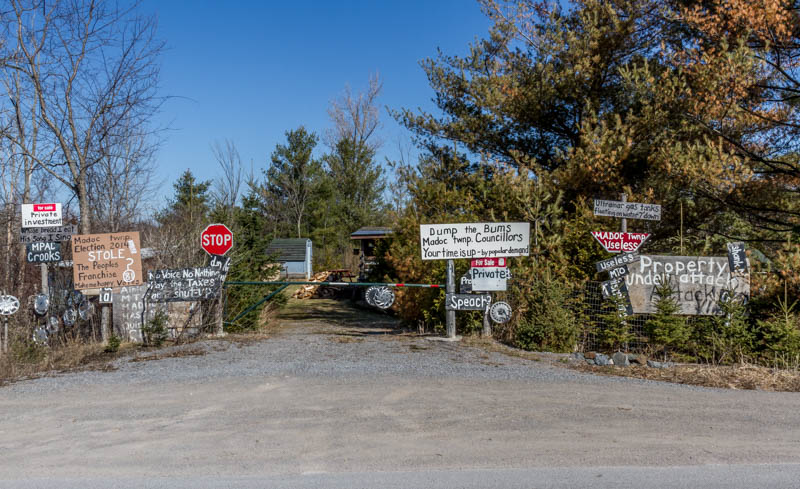