Present Via Her Crafting

Some of you asked about the lack of masks for most people at the Christmas Parade. I wondered about what would be the protocol before going, but rightly or wrongly, I figured that the cold would really inhibit the transmission of water droplets. And . . . this is a big one . . . there was not a single active case in our slice of the health unit region.

Now, back to the tree party. No, I am not going rehash the whole thing, but I do want to declare that my dearly departed mother was remembered and did play her usual part in the festivities. (Have you ever heard of festivity being used in the singular?)

Unexpectedly, Shauna produced my mother's little sewing basket which she had covered with smocking. I don't know where she got the cigarette case because no one in our family has ever smoked, but it contained some of her buttons. I have a vague memory of playing with a larger button collection than this when I was quite a wee tyke. 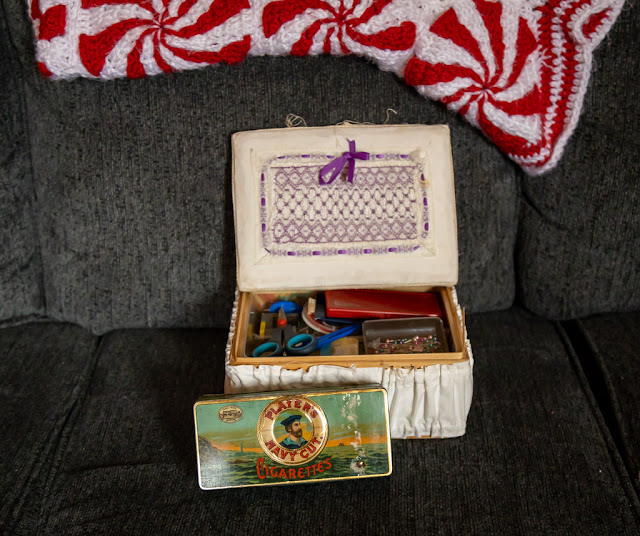 I purposefully included the afghan, which is a Sue creation. It is one of three candy cane afghans that Sue has crocheted. I thought the juxtaposition of my mother's crafty stuff and Sue's afghan was appropriate.

Then, near the end of the decorating of the tree, out came Mom's smocked Christmas balls. 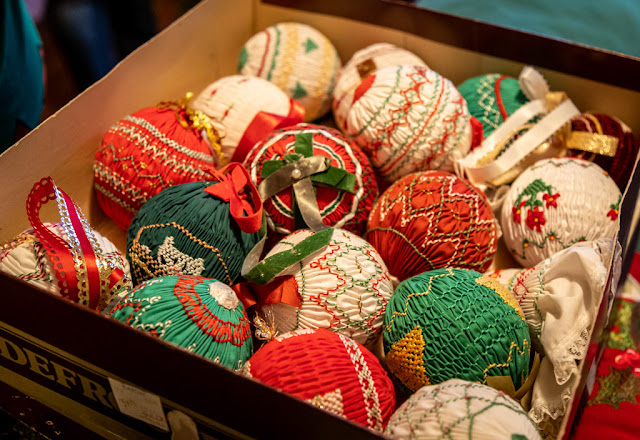 If I am counting correctly she smocked 17 balls over 17 years. We have another set, for she would do two similar ones every year, one for each of her two granddaughters.

We all want to be remembered by our children and grandchildren, and I am sure she had this in mind when she did the work. I'd say that her work has been effective.

I don't know if it is obvious, but I did have a bit of a moment looking at and touching them again. My smile wasn't very smiley when Sue prompted me in the second photo. Shauna calls them The Feels. 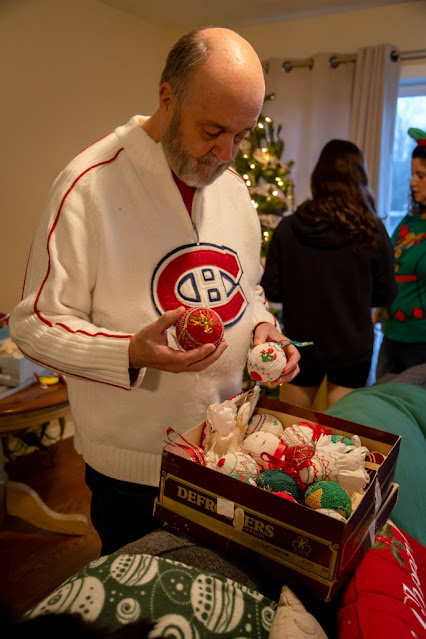 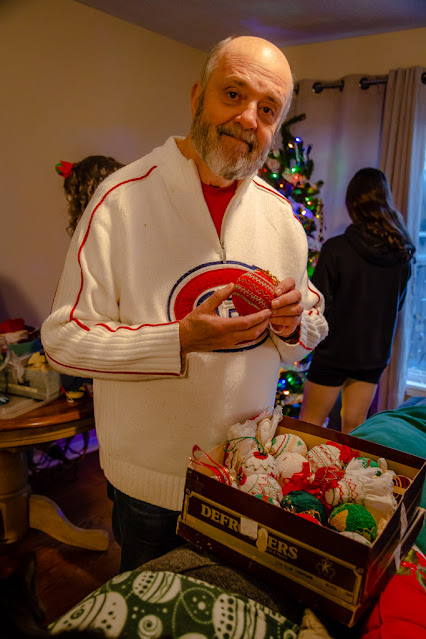 We're not quite done with my mother's lingering presence at the party, for the last touch was putting the skirt at the bottom of the tree, which Mom made, possibly ~1990. 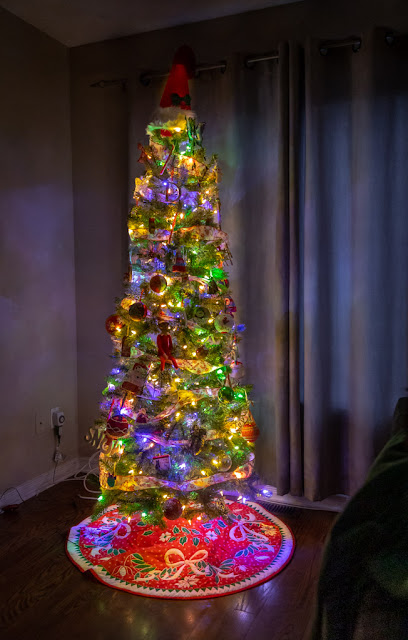 Some say that in one way of looking at life and death, there can be said to be three deaths. The first is when your heart stops beating. The second is when they put you in the ground. The third occurs when your name is spoken for the last time. Even though Mary has been gone for almost 19 years, she is still around us and is remembered, and we trust that this will continue for a few decades yet – every year when Christmas rolls around, and probably at other times too.

What wonderful memories you have shared. Yes The Feels.

Your Mom's creativity in those smocked Christmas ornaments show a real patience as smocking is so difficult. Gorgeous tree skirt. I like Sue's candy afghan - another legacy in the making.

What lovely memories, and good craft made by your mother! Love the candy-cane afghan also by Sue! Your tree is gorgeous and will be so lovely to look at through the holidays!

There is wisdom in that three deaths concept.

And you have now extended her memory by telling us. Thank you.

What a talented person she was, making those smocked ornaments. What a treasure. I've got some of those "feels" going on too. Thank you for sharing your mom with me, keeping her memory alive. :-)

What a lovely tribute! Beautiful handwork by all!

I wish my children were as sentimental. I did embroidery a quilt for the first, but it is who knows where. We do hang my husband's mother's ornaments because she was such a handcraft type of person for just such a holiday. Your photo captures the love and memorey.

Those are beautiful items. I've been surprised what the 6 grandkids remember and cherish about their grandparents, my parents. The items they chose over the years to remember them is interesting. My son has the stuffed white swan, because they always walked to the pond to see the swans. Linda in Kansas

Although I still wear a mask when in crowded indoor situations, which is rarely anyway, I can't think of the last time I wore a mask outdoors, even when I wasn't six feet away from others all the time.

But then I'm fully vaccinated and even if exposed, I still have nearly a 90% chance of not getting it and if the small odds strike, I'm very unlikely to end up in a hospital or die. If I was immune compromised, in a high risk category or not vaccinated, I would wear it outside as well.

The crocheted balls and the skirt are amazing. Great way to remember. And I love your tree decorating festivity - a fine start to the Christmas season. I am holding off on all such events, hoping against hope that the away daughter can get home (and get back without quarantine hassles). It is her job to get the lights on the tree. After JG goes and cuts it. He has one chosen, but it needs to be newly cut so as to prevent needle drop. Sometimes I envy those of you who have gone to a tree that comes out of a box and returns to it. Without making a mess.
Almost December. I loved your tree lit shots in the previous post, btw.

I was quite touched by this post. Brought back memories of my mother. Thank you!

What a beautiful and emotional post! I too got the feels. Your mom was so gifted and the decorations are incredible. I love them. Sue's afghan is very festive and does add a lot to the photo. I have a few things of my late mother-in-law's and the girls' stockings that my mom made when she was on jury duty long ago. My girls will have nothing that I've crafted, but hopefully great memories of our cookie baking/decorating together.

What beautiful things she left you. Lovely gifts.

I look up smocking ornaments.
Coffee is on and stay safe

It's healthy that we have links to the past and maintain them. I have a sweater that my Mom knit for me way back in the sixties. I will always keep it.

Debby said...
This comment has been removed by the author.
6:40 pm

This post gave me 'the feels' too. I have one ornament, a cheap plastic one. My mother was 3 months pregnant for me, and it was my parent's first married Christmas, and my father didn't want a tree (to save money). His pregnant wife cried, and he caved, and there was a tree after all, with one box of ornaments. I always think about that Christmas when I put that ornament on my own tree.

It was very clear from this post that the memories of your mother were with you all at the tree decorating festivities. This was a lovely post.

Those smocked balls are so beautiful. They look like it took a lot of work to make them but I can imagine the love with which she made every one. Your tree is beautiful!