Recently, when I posted the pics of JJ's and my grade 7 projects, some of you were asking about Jonathan's contraption. This is because you are curious and like to know how things work. I metaphorically shrugged my shoulders at your questions with a disdainful, Who Cares, nonchalant attitude and carried on in my lost way.

Sue, however, is quite opposite me in wanting to know details — sometimes painfully so. If you start to recount something to her, she will be thinking of and asking for details before you can can finish your message.

All of this is a leadup to describing how Sue grabbed JJ's project, pulled it apart for lame-brained me and showed me that there are three sections and three candles. 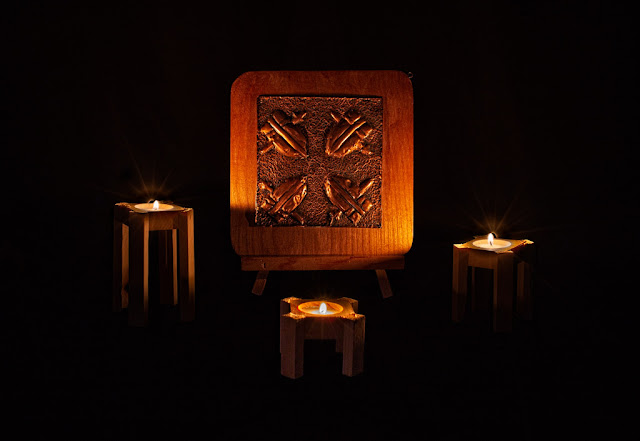 That ↑ image is a composite of two photos: one for the general lighting and a second for just the candles. This is because the candles were blown out (ie too bright to show detail) in the first photo but when I exposed for the candles in the second, very little else was visible because I had to underexpose by a lot.

The next↓ image is one photo, basically exposed for the candles but with a secondary light source to light the rest of it. I also cropped it differently although the setup, including the position of the camera, was exactly the same. 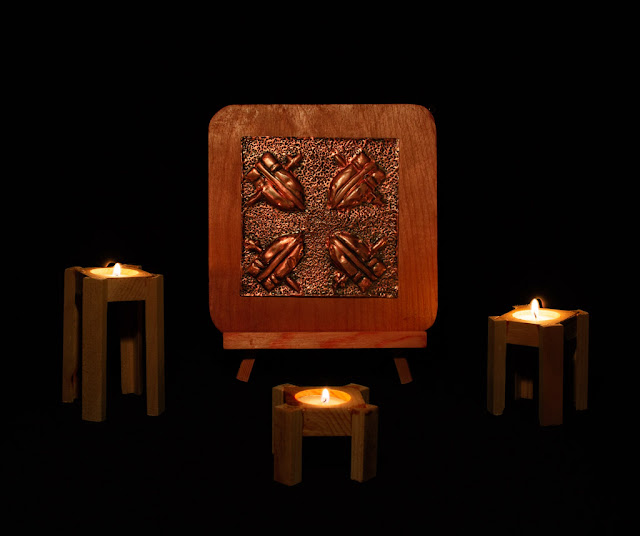 I didn't realize at first why I liked the first photo better than the second, and then I saw that the second lacks those interesting shadow of the first image. Specifically, my copper object at the back is completely lit from the ancillary light that I was using from the front, thus eliminating the shadows. This method would be good for showing the detail a specific object, but it makes the lighting less interesting.

So there you are. You now know how JJ's contraption really works and also how clueless I am.

Posted by Anvilcloud at 6:39 am

The shadows help create mood which I quite like.

I like the shadows too. I'm like you and don't pay much attention to how things work. (although I enjoy finding out)

I really like both of these an envy your lighting techniques, but I must be behind in your posts because I have no clue.

You do interesting things with lighting.

I guess it depends on what it is about, if I want to know about detail or not.
Coffee is on and stay safe

Given all the detail necessary to light, arrange, crop and assess the shadows and veracity of the shots, I would say that your head for detail is just fine. Sue's is just different.
The thing about women who run households is that if they do not have a 'how does it work' mentality, their many and varied household tasks are either not done or not done well.
And on a sad closing note, my head for computer detail is absolutely useless when I try to explain something to JG. On the other hand, I have no idea how a car engine works. Well, almost no idea.
Mars - Venus?

That's a very clever candle stick! Quite a bit of detail involved in making it all fit together perfectly, I imagine.