It seems that no one thought it funny yesterday that a guy inadvertently but in effect posted that his mother was an owl.

"Every time I see an owl, it reminds me of my mom." You seriously don't see a twist there? You don't see that one could legitimately glean that his mother was an owl?

I am rather flabbergasted, but, of course, humour is a funny thing (pun intended).

Speaking of puns, here a few of my recent ones on uknowwhere. I do skip a lot that I see, but these two made the grade. 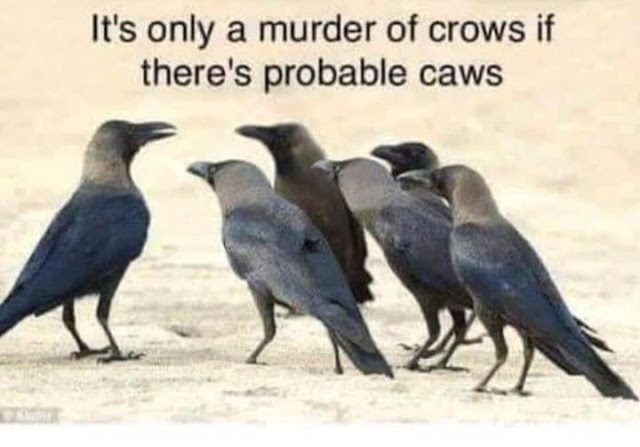 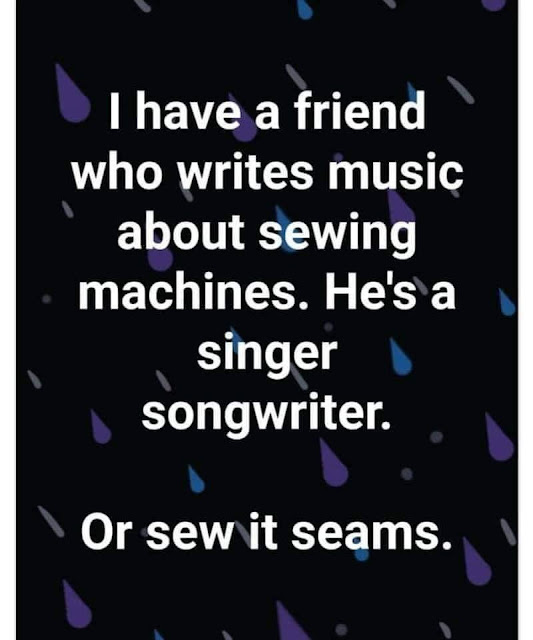 I'll be here all day, folks.
=======================
Not funny, but I will tell you about my non-post, which I had set for yesterday.
Like almost everyone, I became captivated by Worldle. I played for 11 days and wrote about how it is played and how I was doing.
Then I decided that I didn't want to play anymore, or not every day, at least. So, I didn't post what I had spent some time writing. Oh well.
It is a good game, however, and I recommend at least familiarizing yourself with it.
=======================
On yet another tangent, let me tell you that we watched The Missing, series 2, on Prime.
It had been a while since we had seen series 1, long enough ago that we had all but forgotten the plot. But at least I had a positive vibe about it and the protagonist. So we watched series 2, and I expect that we will at some point watch series 1 again because, by then, it will seem mostly new.
Fabulous tv: a good mystery set in 3 time periods although mostly just two after the intro. As the time switched back and forth so did the characters (not that it was necessarily new characters, you understand) and locations. Aside from the plot itself, it was often a bit of a mystery as to whom we were seeing at any given moment and in what time period and location. However, that was mostly in the early episodes, and it did all make sense as we settled into the series.
It is a British production featuring mostly English characters but a French detective, and it takes place outside of Britain, mostly in Germany in this series. Frankly, it was great tv. My only criticism is that I couldn't find English subtitles for those little scenes that were spoken in other languages. They were, however, short, few, and far between, and in a context, in which we could usually get the gist.
From Wikioperia

The Missing is a British anthology drama television series written by brothers Harry and Jack Williams. It was first broadcast in the UK on BBC One on 28 October 2014, and in the United States on Starz on 15 November 2014.[1] The Missing is an international co-production between the BBC and Starz.[2] The first eight-part series, about the search for a missing boy in France, was directed by Tom Shankland.[3][4] It stars Tchéky Karyo as Julien Baptiste, the French detective who leads the case, with James Nesbitt and Frances O'Connor as the boy's parents.[2]
The second eight-part series, about a missing girl in Germany, was directed by Ben Chanan. It was broadcast in the UK, on BBC One, from 12 October 2016[5] and in the United States, on Starz, on 12 February 2017.[6] Tchéky Karyo returns as Julien Baptiste, with David Morrissey and Keeley Hawes as the girl's parents.
Both series received positive reviews, with critics praising the cast, especially Tchéky Karyo's performance, and the storytelling. In February 2019, a spin-off series titled Baptiste was broadcast on BBC One, again starring Karyo and written by Jack and Harry Williams.

If you are not clear by now, I recommend it highly. When it was over, I sat there for a minute and said, "Wow!" more than once.

Posted by Anvilcloud at 6:33 am

Still don't get the owl joke but did get a chuckle at the two you posted above.
Up early to eye doctor for preop for cataracts.
I'm still playing Wordle with siblings.

Love the two jokes you posted today. I will check out Missing this weekend. We’re in for another storm.

You just wanted to run them again to make us all eye-roll. I confess to missing the point on the owl, but enjoyed the photo.
Aw, put the Wordle post up. You really know how to tantalize. Hmm. That is not how I would have spelled tantalize, left to myself. Must get out Oxford dictionary and find out why. After I have blown my mind on today's Wordle.

I did get a chuckle out of these two.

I have a friend who loves puns and posts about three or four of those a day on Facebook so I probably have access to thousands more if you want.

I'm on day five or Wordle. What is your starting word everyday? I've tried ADIEU to cover vowels but find even knowing vowels, doesn't help much so I've switched the last three days to TRADE which has served me better.

I did understand these! Yay! I hope that The Missing is on a channel I can get. So many great series aren't. As for Wordle I've switched from adieu to roate (never heard of the word, but it exists); today I got it in 3 with a lucky guess on 2. I wouldn't say I'm addicted but I'm very glad that it's only a once a day thing.

You are good at finding puns! Loved those you posted.

I do love a pun. And Wordle though I don't post my results daily. I have mainly third or fourth guess wins. If e3ver I get it on the second guess, I might post that. I'm still finding it fun.

I don't have prime but will probably be adding it as soon as I cut the cord. I'll look out for Missing! So far I'm 10 for 10 in wordle. I can't stop. It's good you can only do it once a day.

I can see why seeing an owl would remind someone of their mom. Wise, maybe a round face, maybe she adored owls. I think I'm missing the pun.

Now those did make sense, and were funny.

I liked these punny jokes--lol!
That series sounds interesting to me. Will have to be able to read subtitles, though. Need some good eye days. I will get to it, for sure. Sounds good.

I just finished the first seven series of Ozark and find it creepy but I can't stop watching until I find out what happens. I'll check out that series, it sounds good. And yes, these two were funny. :-)