(I have appended information at the end of the Caturday section for those asking about the faces in yesterdays post.)

When I was a teenager, my dad worked in the greenhouses on a nursery, and we lived in a little cottage on the premises. Meanwhile, the owners had a much more stately house on the other side of the property.

At the time, there were three cats: a mother black cat and two mixed cats that were still juveniles. They were outdoor cats that the owners did feed. They weren't exactly wild, but they weren't house cats either.

Somehow or other, I was able to further tame the smaller of the two young cats, and they other one came along for the ride.

My special cat was a bit of a runt. She became very pregnant, and I assume that she died in delivery, for she was never seen again. I still feel bad about that or about whatever happened to her.

Her sister, however, thrived for at least several years. She had a number of litters. I also feel bad about that, but I was a kid, and a cat was just a cat on a nursery. Now I know that it would have been merciful to spay the poor thing, and I feel some resentment that the adults would not have done the humane thing. But they didn't know any better either, back then.

That's the background, and this is the very short video clip that brought it back to memory.

The kittens climbing up the lady's leg reminded me that one of the kittens once did the same to my mother. Unlike the lady in the clip, my mother was closer to yowling than smiling because she wasn't wearing rugged blue jeans. Nobody much did wear jeans in those days although they are now a fashion statement, and the more torn the better.
Perhaps, I will look for some old kitten photos to scan for another Caturday.
=========================
Some of you asked about the gallery of faces in yesterdays post. Since there is no good way to respond to people on Blogger, here is an explanation. (Responding has always been a problem on the Blogger platform.)

The piece was originally commissioned by the National Capital Commission for Canada’s 125 birthday. It was gifted to Mississippi Mills in 2017 to mark Canada’s 150 birthday.
It consists of a structure similar in the shape of the dwellings indigenous peoples in eastern Canada lived in before Europeans arrived.
Attached to that structure are faces from all over Canada that were cast in glass to represent the diversity of Canada. When it was installed in Almonte, another six local faces were added to reflect the surrounding community.

This is the photo that Sue chose to post on her 365 challenge. It's of Jeela Palluq-Ataguyuk. 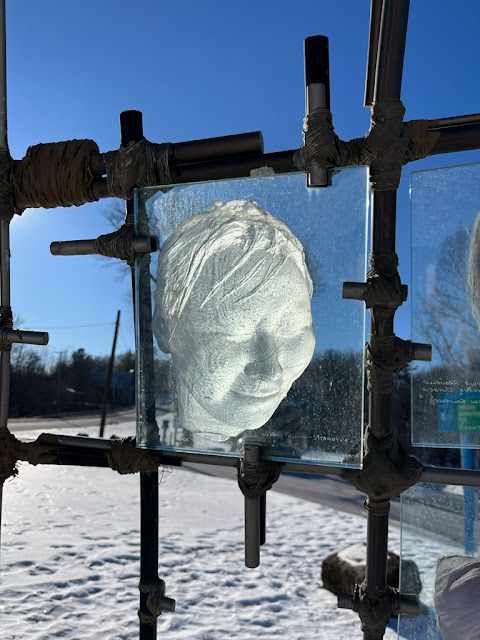 As best as we can glean, here is the story:

Jeela Palluq-Ataguyuk was an Inuit lad from Iqaluit who committed suicide, leaving his parents bereft. It seems that his father, Jeela Palluq-Cloutier has written children's books featuring his son. Youth suicide has been a problem in some northern Native communities.

Posted by Anvilcloud at 6:50 am

Great photo, Sue. Such a tragic story of a beautiful young person. How devastating for his family.

I just occurred to me that my mother never wore jeans in her life. It was never an issue, never discussed and didn’t feel strange or unusual to us. That cat video is cute.

Ditto what Marie said, my mother never even wore slacks as I remember her, though it's possible when she was younger. No jeans on that woman! So sorry to learn about the young suicide, another "never should happen" which does so frequently. Your cats which weren't spayed are also sad. My parents did at least get our female cat spayed after one litter, and the same for the one kitten we kept. Considering they never went to doctors themselves, this was a bit surprising, now that I think about it. That was in the 50s too! Well ahead of the more conscientious pet owners movement. I've clicked on the box for follow-up comments being sent to my email (below) and now I can receive those emails. I also will receive an email of each person's comment to this blog until I unsubscribe to the replies. Just a FYI.

Thank you for the update on the installation. Such a sad story of the young boy, though.

In my petcare business years I occasionally encountered cats who would climb me like a curtain. One routinely greeted me this way and wanted to ride about on my head, ow.

I had forgotten that Almonte got that artwork. Thanks, as others have said, for the info.
My grandparents also had barn cats that had litters of kittens. I don't recall any of them being unwelcome, though. There were enough mice and rats to satisfy an army of cats. As to spaying them, that cost money. My aunts, when they still lived with their parents on the farm, used to tame a few into house cats. (see mice, above). My youngest aunt had one so tame she could coil it around her neck like a fur piece, and that is what my father thought it was, the first time he saw her with it. This cat was named 'Shmoo' and our fellow oldies may know why.

Amazing artwork and yet such a sad story behind the described part of it.

Jeans….. like you, my Mom never EVER wore them, though in the 1970s she had two or three more traditional skirts and traditional ladies’ pants that were colored and patterned in the indigo blue look of jeans…… but not the actual jeans material.

My mom wore slacks and what she called "pedal pushers" but never jeans. That's interesting about the faces. There is an exhibit in the museum in Anchorage of shoes of some First Nations people who have killed themselves, along with their stories. It's sobering.

Cats sometimes view people as mountains to be climbed.

Those kittens are climbing because she is feeding them on the counter! Ugh.

I didn't know you grew up on Nursery. My husband retire from a tree farm. Even if it didn't pay the best, he loved the work.
Coffee is on and stay safe

Thanks for the story of the installation; so sad for the boy and his poor parents. It's so creative that his father turned his grief in stories about his son.

Sue's photo is really stunning. As is the display. We know a lot more about animals now than we did back then and spaying is definitely one of those things. Although, sometimes with ferals it is hard to get them caught to get to the vet. At least these cats you grew up with were cared for and fed. I've been lucky with Gypsy -- who was definitely feral and probably dumped at about eight weeks -- and Lizzie, whom I suspect was someone's house and dumped when she got pregnant. She'll never be a lap cat but she loves to be pet!

That was a cute cat video!
While I was growing up we had cats. they were always free to come and go.
The sad story behind the face Sue got on camera reminds me of the news about indigenous youth committing suicide. think, it was a couple of years ago.