I Come from Munchkins Mostly

While messing around in ye olde photo album for other photos, I came across these and thought that I should scan them while I was at it.
While I refuse to muck around in Mom's falling-apart album again right now, I think this↓  photo was dated 1920. If so, my mother was only 6 and my grandfather was 39. He is the one with the big X on his chest. There have been times when I have photoshopped mom's markings away, but I am starting to find them endearing. 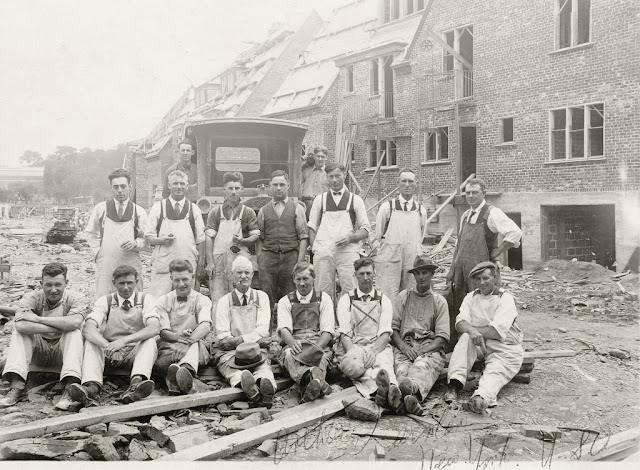 It was taken in New York on a building site where my grandfather was working as a bricklayer. My grandfather worked in NYC for 7 years before retuning to Montreal. I am not sure how many of those 7 years the whole family lived there, but I know that it was for some of them.
While I am tempted to say, "Just think, I could have been an American,"  of course I wouldn't have been because my parents wouldn't have met, and there would not have been a Me. Not that I would have missed myself had I not existed, just as I will not miss myself when I cease to exist.
Here is another photo that Mom has scribbled on, taken 20 years later in 1940. From left to right: my two grandmothers (paternal and maternal), Uncle Charlie, and Mom. 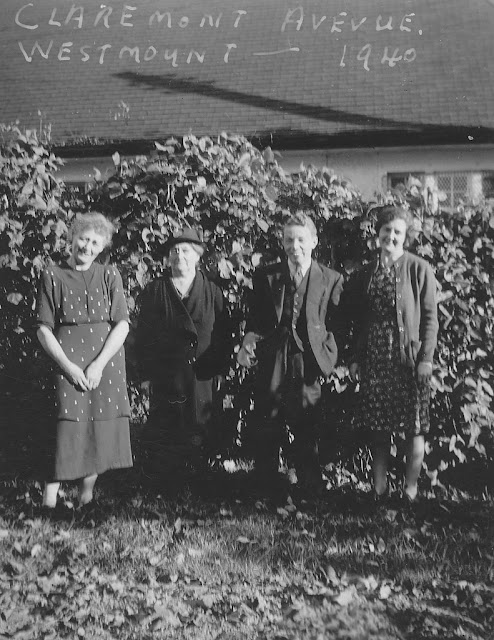 What a family of munchkins, with my mother looking the tallest at the grand height of 5'1". I think my paternal grandmother (far left) was somewhat taller until polio left her with a dowagers hump. At least, I think it was polio. I never heard her complain though, and I think I would remember for she lived the longest of my grandparents — until I was ~17.
I never knew my maternal grandmother, or at least I don't remember knowing her because she died when I was 2. I note that she was wearing a coat above and another below, both photos looking like they were taken in warm weather and she not looking warm at all. 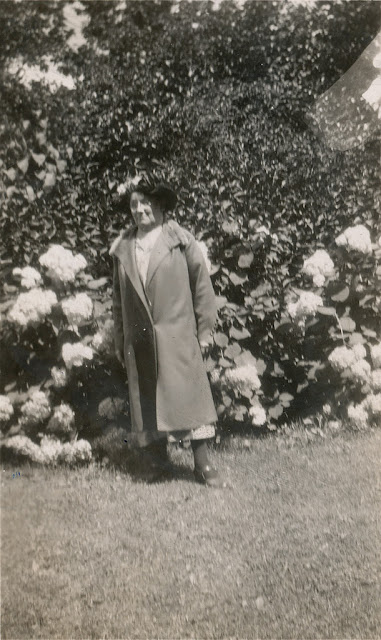 So that's three-quarters of my gene pool. Only my dad and his dad are missing. They were also short. I am the 6' and almost 2" exception. The bricklayer grandfather was also tallish, I think about 5'10".
Posted by Anvilcloud at 6:52 am

Genetics is fascinating. These days we are watching our grandchildren for height. Two appear to favour the taller half of their ancestry, one the munchkin half. You have wonderful photos in your archives, AC.

There were lots of Newfoundlanders in New York at the time your grandfather was there. They were high steel workers. There’s a famous photo of a group sat on steel girders high above the city, having lunch.

Those a great photos, as well as your memories of your family.

Lovely photos. I'm amazed that your grandfather was only 15 years older than my dad. You fitted more generations in.

I didn't know those high steel workers were Newfoundlanders. They were certainly fearless.

AC, you're lucky to have these photographs. It was an event back then to take pictures.

I enjoy looking at old photos like these. I am glad you left your mother's markings. It makes them much more personal. :-)

I just started yesterday a project I've long been delaying. I'm sorting through my huge pile of inherited pictures and writing ON THE BACK the names of people and any other interesting details.

I'm pretty fortunate. I still have both of my grandmother's alive and up until a few years back, also had my maternal grandfather as well. I have memories of all four, including three of my great grandparents.

We affectionately say we come from a family of miniature bog stompers. For the most part, we are all short. (We never knew our paternal grandfather). My grandsons are all long and lanky so there was obviously a throwback somewhere. Low and behold, paternal grandfather was a tall gent.

Old photos are lots of fun. About your height - I am the same height as my father and lots taller than my mother. She blamed excellent nutrition on the discrepancy. And complained about letting down hems.

My younger brother and I are the tallest of the family. Our dad has shrank a bit, but at his tallest was an inch shorter than me.

LOVE the "x" instead of an arrow or circle to indicate which person is the relative. Every household must've had one of those white marking pens.
Your paragraph about your existence, when or where, if and not makes me think you had some mind-altering substance for a moment. It was too deep. I went in circles. Are you really still you, if it's a blog entry?
I asked my Dad why there were so few photos of his parents. He said cameras and film processing was an expensive, unnecessary thing for many folks.
You're lucky to have those older photos.
Come visit Kansas City: I have 13 boxes and 6 plastic tubs of family photos to organize before I croak. Linda in Kansas

Those scribblings are precious! I've come to appreciate them also. Voices from the past. My Scottish relatives were mostly short too; my great-aunt Margaret (one of the people for whom I'm named) was well under 5 feet tall and had to buy her shoes at a children's store. On the other hand my dad was fairly tall and one of my brothers (the living one) is 6'2". I'm sure a better diet helps but there were also a few tallish women in the family--my mom's and dad's mothers.

You have taken a good look at one part of your family...height.

That damn hod made your grandfather shorter!

I love looking at old photos of times long ago!

In my immediate family the tallest was my dad at 5'6". I'm 5'1" but my son is just under 6' tall. This is fascinating seeing the old photos.

I love seeing photos that are marked and I wish more of ours were. My dad tried but in the big group photos, it's mostly faces I don't know, apart from my grandparents and a couple others I knew more about. Those are such treasures. I'm glad both my parents and grands did a lot of photography but there are many where I wonder who the heck they are! My dad was tall -- 6'1" and my mom 5'1". I ended up in the middle though I seem to have shrunk a bit over time!

Having just finished a book on my family history, having those photos were a real boon to research and learning more about them. Your kids will someday be very grateful to have those.