My Ordeal Five Years Ago

Five years ago on this day, I was in the hospital, but just the ER and only for a short period of time.

I couldn't have told you that this is what happened exactly 5 years ago until, just for interest sake, I clicked on my January 2017 photo file to see what was up. Although I hadn't realized what I was about to see, I do remember the situation well and not with fondness. I just didn't remember that this is the exact anniversary.

It began a few days earlier on Friday. It could have even started on Thursday*, but I am not positive either way although I lean toward Thursday. However, this initial photo is dated to the 13th, and that date —  Friday the 13th — does seem more appropriate for this narrative. Whatever the day, we were watching tv at suppertime when my lower back became very uncomfortable.

It became so painful that the only slight respite I could find was from kneeling on the stairs and assuming a rather awkward position.

The pain went on all weekend. I spent a lot of time in this ↑ position and had many hot baths. I found that an extremely hot bath might provide some relief for about an hour, and if memory serves, I may have had up to 5 baths on one of those days. Why it worked, I cannot say, but it was a blessed, if only a temporary, relief.

Although, the attack began on Friday (or perhaps Thursday*), I was still in something approximating agony on Sunday night. I recall that Sue, in some desperation, called the provincial health hotline. All they could advise was to go to ER. From what I can gather, that is all the hotline can ever advise. I refused to go (see footnotes for an explanation), preferring to see our family doctor on the next day. The consultant heard me tell Sue in no uncertain terms that I wasn't about to comply, and she advised calling an ambulance after I suppose Sue said that the trip would be problematic. I said a firm no to that as well.

On Monday, Sue called the doctor and set up an appointment. Whether she called before or after I urinated a brown, gucky substance, I can't recall.

What I do recall, is taking a bottled sample of that urine to my appointment with the doctor. She just about had a conniption and promptly called ER and told them see to me right away. As head of ER, she could do that with authority.

They put me on IV and lay me on a bed from where I stared at the ceiling ↓ with some concern . 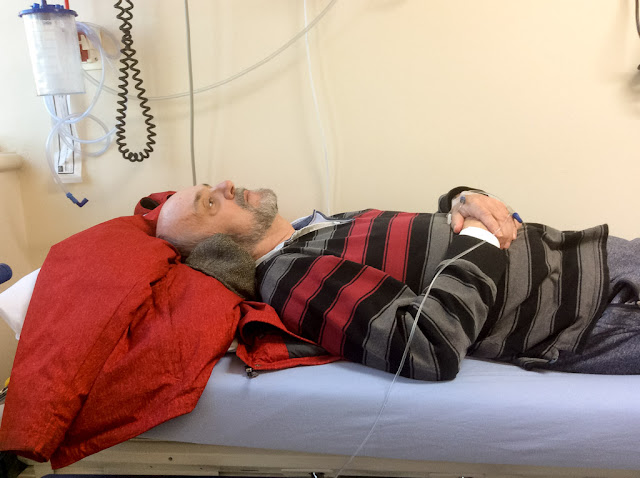 If I look a little morose ↑ it may be because this ↓ is what I had too look at directly overhead. 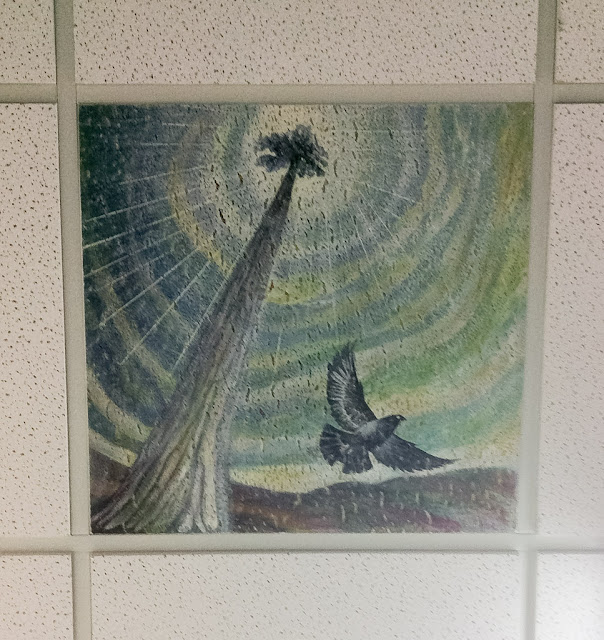 To me, it was a very gloomy painting of a dove flying up to heaven. I assure you that a sick person in a hospital bed does not need to look up to see a bird ascending to heaven.

To be honest, however, once I had passed that brown urine, I started to feel better, so I could smile ↓ — I think at seeing the humour in the juxtaposition. You may as well look on the light side of life if you can. 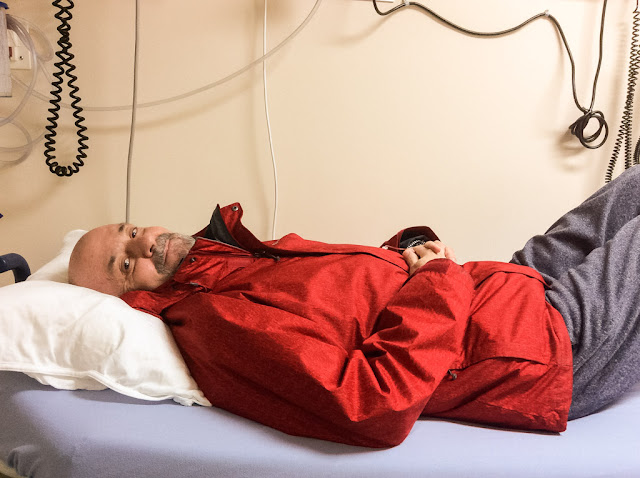 Aside from the IV, I was placed there to wait for am emergency opening for an ultrasound scan.
They found a small kidney stone or two, but the stones haven't bothered me in these five subsequent years. Another more recent scan has indicated that I still have at least one kidney stone. At the time, although I hadn't noticed it, I had apparently, passed whatever stone has caused all of the pain.
That evening, the family came over, and my world was good again although I may look a little wan in the picture. 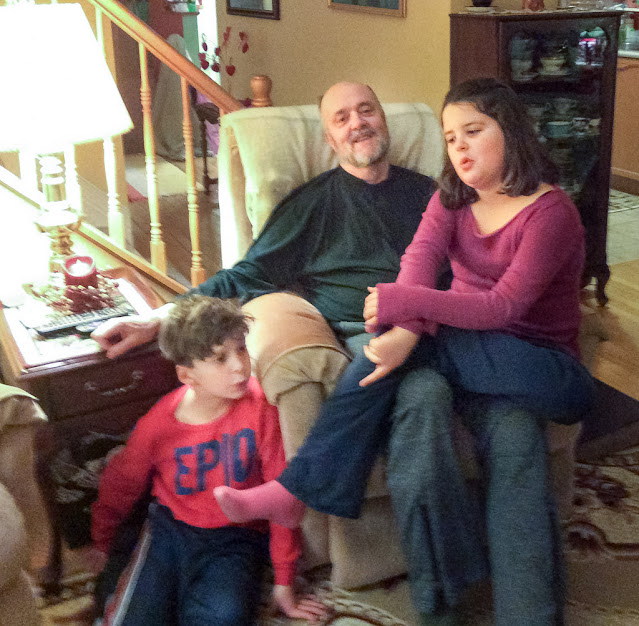 But all of that kneeling on the stairs had done quite a number on my poor knees.

My family doctor also referred me to the urologist. I think I had a CT scan and another ultrasound, but some things mercifully begin to fade from memory.
* Although the photo data reveals that Sue took the first, stair, picture on Friday 13, I starred Thursday, above, for I think that it may have begun then. It seems to me that I remember thinking how unfortunate it was to have occurred on Thursday because my doctor doesn't hold office hours on Fridays. If  that is the case, and I think it is, it means that I spent three-and-a-half days in severe pain.
** Before you all chide me for refusing to go to the ER, I just couldn't imagine even getting there in that condition, and I further couldn't imagine being forced to wait to be attended to in the agony that I was experiencing. Despite the pain, I had some confidence that I wasn't at death's door and that I could wait to see my doctor on Monday. She is very good at being prompt, and I knew that I wouldn't have had to wait interminably in acute discomfort.
Posted by Anvilcloud at 7:00 am

What an ordeal is right! I am so sorry you had to go through all that pain. It must have been a nightmare. Glad all came out alright!

I can only imagine the pain never having had a stone.

I’ve heard kidney stones are excruciating. Quite the adventure, AC. Not one you want to experience again! I understand about your reluctance to go to the ER. I would be the same.

Argh. Kidney stones are awful. I had one bad bout, and let me assure you, I drink a lot of water. I do not intend to go through that again.

As for the dove flying to heaven? Boy. I'm trying to imagine why anyone would think THAT was comforting to anyone in your situation.

Good grief. The 13th sounds about right.
I am so sorry for this. You tell the tale with humour and aplomb! You knew what you did or did not want to do.

I wonder at Sue's point of view of the saga! I would have just called an ambulance!
And, yes, telehealth always says to go to the ER!!!

An ordeal, indeed! So glad you haven't had a recurrence. The dove thing is too funny.

I wasn't far into this post when I said to myself, "Kidney stone." Rick endured this (well, I can't say he endured it well, but I doubt anyone could!). It involved one trip to the redi-care, who referred us to the ER, and then a second two days later to an ER an hour away at 5 a.m. on the most deer-infested, winding roads in northern Michigan. I was terrified and meanwhile he was writhing in pain next to me in the car. I love the photos -- you did the right thing. (He got into emergency surgery on the second trip and has been fine since). I really feel for you by proxy and especially for Sue! But I loved this post -- the detail of the bird on the ceiling. You're right -- that's a little disconcerting for an ER view! Pay attention to the one within -- I know you don't want a repeat visit!

I wonder what sadist put that painting on the ceiling. A friend of mine who plays many instruments including the Irish harp, plays at bedside in hospice when the family invites her. She assured me she doesn't bring her harp for fear of great confusion for the patient.

My older daughter is prone to kidney stones; in fact, she had one while she was newly pregnant and had to have a procedure done and a temporary stent put in. According to her, she would rather go through labor twice than deal with another kidney stone. Agonizing. I'm glad you've been fine since then!

Having worked in an ER for almost 32 years I can say that Kidney Stones are no laughing matter and extremely painful.
I've seen many a male brought to tears by them. From your pictures you seem to have handled it well.

That would be painful.

What an ordeal. I am glad it's over.

I had a kidney stone once long ago, and it was one of the most excruciating pains I can remember. Way worse than childbirth. The stone passed on its own, but they took numerous x-rays to watch its progress. I sometimes wonder if I'll one day pay the price for all that radiation.

What an ordeal you went through.

What a scary thing to go through. I am glad you came through it okay and that it's over. Wishing you well, my friend.

So glad you came out fine. But I'm sorry you had to go though it all.
Coffee is on and stay safe

Gall stones, similar problem, although brown and ucky was more blood orange colour and ucky then anything else. In the end they removed the gall stones and grit and a week later the whole gall bladder. Not have had a problem since.

I had a kidney stone in my mid-20s and when the lady asked me to rate my pain on a scale of 1-10, I sort of undersold it at a 6, thinking to myself that women deliver babies and I could suck it up. It wasn't until later, after a couple of mom friends who had delivered babies AND had kidney stones told me that the kidney stones were worse pain, that I started to think maybe my pain tolerance is pretty high.

I'm happy you haven't had a repeat kidney stone experience, but I hope that you learned your lesson and will head to the ER the next time you start feeling those symptoms!

Kidney stones are the worst. I had an attack only once. I wouldn't wish that pain on anyone. I pray I never ever have to go through that again!