Once the storm Monday's great storm was over, many effects lingered.
For one thing, we all had to dig out. That was completed in our driveway by the following morning, for when I looked out the window, I saw that the contractor had made his second pass sometime in the night. Two factors made a second clearing necessary. One is that it kept snowing and drifting after the first pass. A second factor is that the town plows had blocked us in again.
Although we had been dug out by the next morning, many weren't, so the school buses were cancelled for a second day. Then there was another overnight snowfall that rendered conditions messy enough to result in 186 cancellations or delays on the third day. Indeed, I had to shovel the driveway before I headed off for our weekly grocery pickup. Well, I guess I didn't have to, but there were a few inches of accumulation, and I hate to drive over the snow and compact it and make if all bumpy and rutty for the next two months.
Sue stuck her head out to snap a photo when I was just about done.
Then, I had to be a bit careful on the drive to the grocery store because, speaking of bumps and ruts as I was, there were plenty of those on the roads. When I arrived and called pickup to let them know that I was there, they asked if I could park by the doors and not in the designated spots because they were fidning it difficult to push the carts through the snow.
They also alerted me that they couldn't supply the apples, cauliflower and blueberries that I had requested. I put this down to transport being impacted by the storm.
When Sue was unpacking, she called me over to see the potatoes. They were rather small. I am speaking of the four front potatoes in the following photo. The one at the back is of normal size from a previous pickup and just shown for reference: two from this order are half-size and the other two are half again. I'd just as soon, they hadn't bothered. 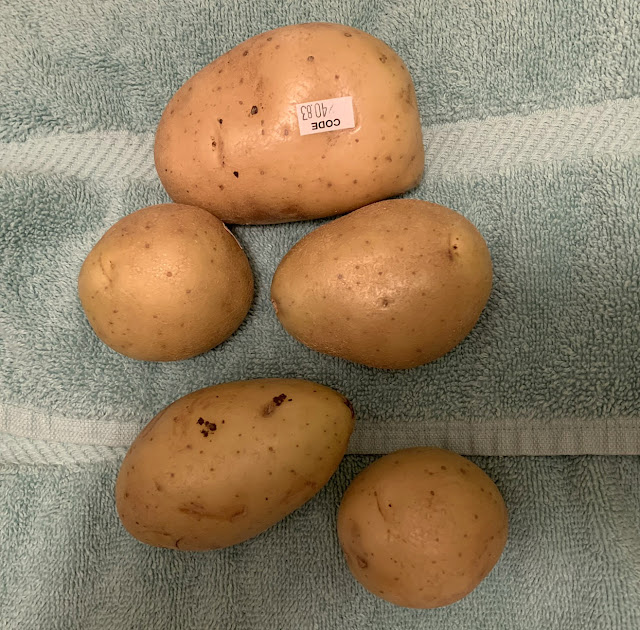 We are also left with prodigious snowbanks although the one across the street, below, isn't as high as ours, which I'll post at the end. 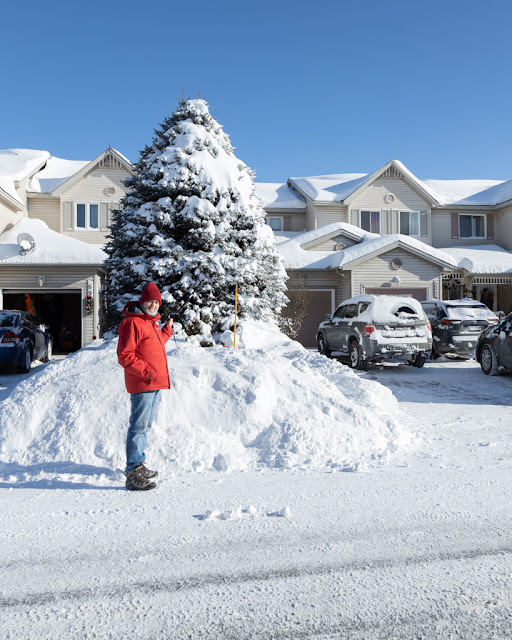 So, what am I doing over there, and to what am I pointing? Perhaps this ↓ will help. 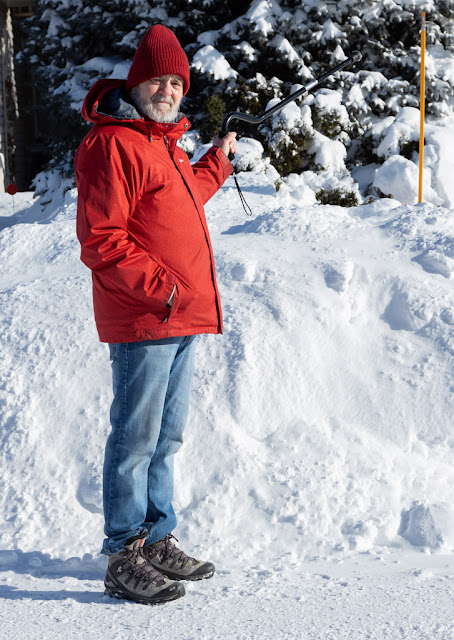 I am using my cane to point to the yellow marker sticking out of the snowbank. The marker is attached to a fire hydrant and is there as a visible clue to the location of fire hydrants in winter. They will come around and dig out around the hydrant, but all of the aftermath work does take time.
Finally, this is Sue by our pile. 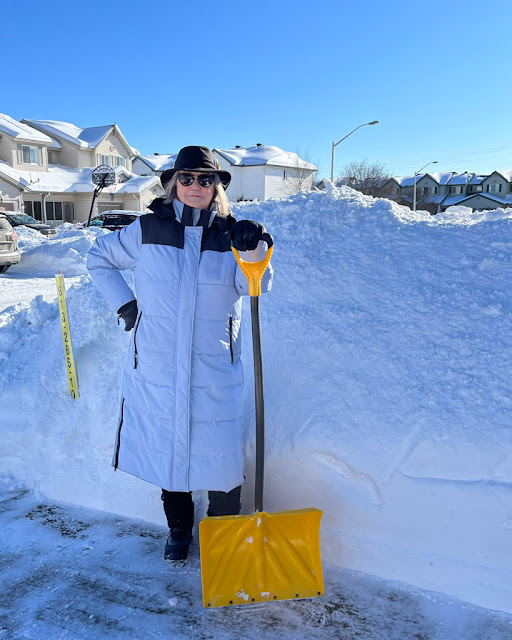 She actually likes to get out and shovel and usually beats me to it. I am sure that some of the neighbours think me both lazy and mean to make her do this, but at least is it harder for them to see Sue and cluck their disapproval when the snow is so high. lol
Posted by Anvilcloud at 6:04 am

I hope you don’t get any more snow, AC, but the chance of that this early in winter are nil.

I think there is more food shortages to come based on Sock Boy's truckers vaccine mandate. What's the right thing to do ???

That is a lot of snow & we take the same types of photos every year to mark the height of the driveway pile. If the neighbours are tossing shade at Sue's enjoyment of snow shoveling, invite them over to toss the snow rather than their opinions (col). Let's hope the town digs out the hydrant before it is needed. Thankfully the two hydrants on our street are both in front of volunteer firefighters homes & they set the example.

Sorry about the potatoes. You will have to mention large potatoes requested next time. I ran out the day before our storm and got a 5 pound bag of potatoes...and have used 2 so far. Shall I send you some? That's a laugh just to imagine a few potatoes crossing the border to get to you! Maybe by June!

Now that is a LOT of snow, all right. And even though they are small, those taters look fine to me. Great shot of Sue showing the depth of your pile. :-)

We were lucky that the snow missed us this time. We usually get the same weather as you….. but we were just a bit more West that this snow’s path fortunately!

We only have about 4 inches on the ground at the moment.

I am up before dark whenever it snows to clear it for my wife to go to work, even if she would have no problem driving over it because just like you, I hate seeing packed snow tire tracks all winter long when the rest of the driveway is nice and clean.

The optical illusion of Sue's head floating above a snowbank! And boots appearing..
We occasionally get big snowfalls, not this winter up to now.

A fine example of Eastern Ontario's most common winter sport - snow throwing. Like caber tossing in Scotland, only more frequent. We finished the dig out yesterday afternoon, as JG wanted to clear paths to the feeding stations. Lots of hungry birds. Deer not in evidence - they may have to yard up early as it is quite a difficult depth for them to move through.

That's a LOT of snow. I've never seen the little yellow rod to show where the fire hydrant is. (Guess it helps the male dogs going on a walk too, eh?)
Be careful with all of that work. Consider getting an electric 1-foot wide snow shovel. My Toro was still working after 35 years. Just got a new one. They really shoot out very far, and cut into the snow. Linda in Kansas

How much snow! I'm not used to it at all, I think that if one day it snowed here I wouldn't leave my house until the last snowflake melted hahahaa XD

It's certainly beautiful although inconvenient and dangerous. It looks icy on the driveway! Ack. I too am having some issues with items in my grocery pick up but am getting most of my stuff.

I am quick to get out with a shovel too. I try to shovel during the deluge in an attempt to stay on top of it. I have a thing about keeping both porches cleaned off, until the roof drops it's load of ice/snow mix at the back. THAT mess belongs to stronger folks than I.

Goodness! That fire hydrant will be a beast to dig out.
A lot of snow your way! :)

Yes, Sue looks much more comfortable with shoveling ... I think the only understanding and kind thing to do is to let her do the whole thing. You, on the other hand, could cook all the meals, vacuum the rugs, wash the dishes and just in general do all those silly little things that we females do.
.....or not !

That hydrant WILL be something to dig out. Are you not responsible for making sure hydrants near your property are accessible? If we have a fire hydrant on our property, homeowners will get ticketed if it's snowed in. Fortunately for us, there's a hydrant across the street and not on our side!

Some of the piles in the city are more than seven feet high.

You've got just a little snow there!

I wouldn't want to shovel that much snow. Good on you guys for taking the bull by the horns and shoveling off your driveway.

That is so much snow. Sue is an amazing lady! I won't dare to do that.

it took ages. They are still working on Perth. No one is happy, though. They want out right away.
My daughter tried to drive girls to school and got stuck!

P.S. You are both looking great!

Now that was some serious snow!