it is all about the light

It is all about the light. I have said this before, but you can take photos of banal subjects, and if the light is good enough, you will likely get a decent result. I think some of recent blue hour photos of pretty ordinary buildings proved that.

Perhaps these next photos will also help to illustrate the point. 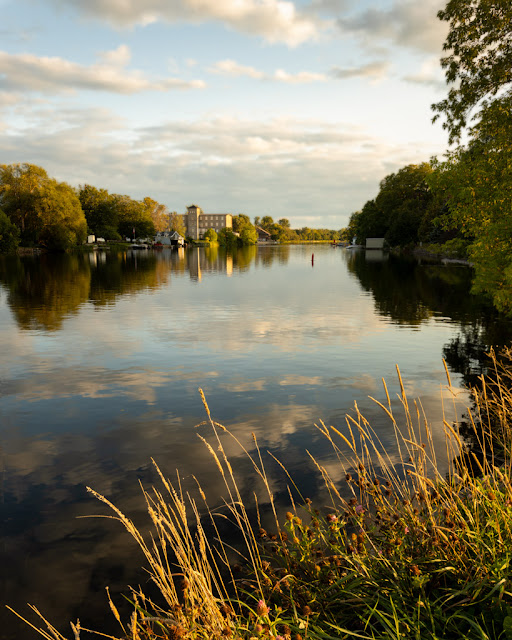 If this ↑↑ photo looks familiar to you, it is because I posted it not that long ago. It was taken during golden hour (that time before sunset when the sun is low and gentle). I find the tones quite good.
My problem is that I would have preferred the mill in the background to be larger. I had used a wide angle lens, which has the effect of seeming to pull the foreground closer and push the background farther away. Now, I wanted to try it with a longer lens.
I knew that being there midmorning was decidedly not the best time. The sun was higher and on the left of the photo (below) instead of lower and on the right (as above). However, disregarding the light, I wanted to get an idea whether the composition would work. If so, I might be able to return at another time.
I think it does work, or rather could work in better light, although I would like to see more of the river off to the right. Sigh: such are the limitations of the medium 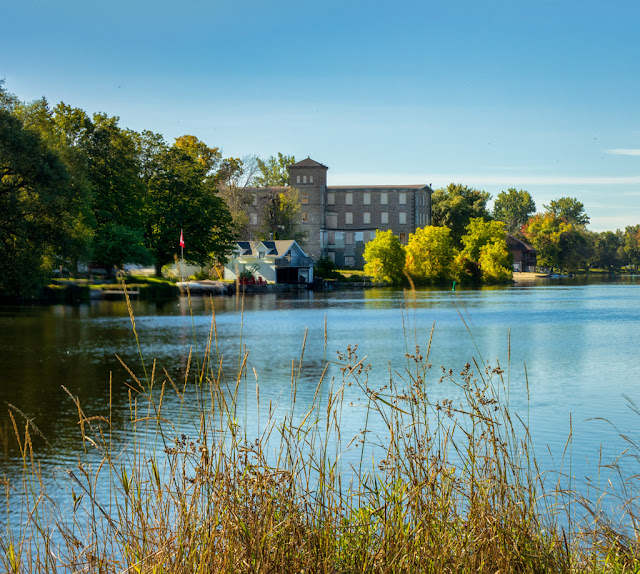 It's not as good a photo as the golden hour one, and this was after putting more editing work into it this than the other. It's not terrible, and it also serves a purpose for local interest as it does show the building pretty well and also from an angle that I haven't seen other local photogs explore. Ideally however, I would like to see more river extending farther off to the right.
Given the time of year, I am not sure what I can do about this now because golden hour now occurs around suppertime when I am otherwise engaged, taking my sustenance. But I'll keep it in mind.
I did take another photo by finding a spot without the foreground grass. I blended three exposures into one pano photo to get more of the river in the frame. I do like that aspect. 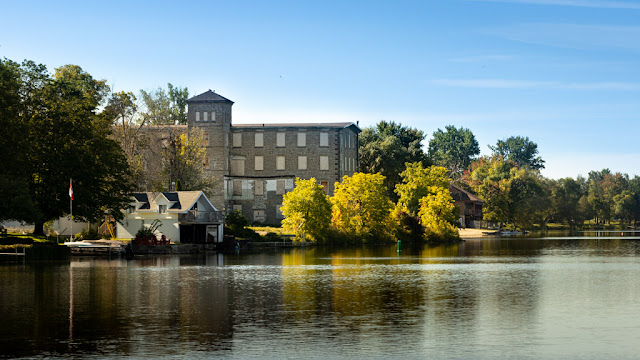 Once again it serves a purpose, but I miss the foreground element. When I compare it to the preceding image, I feel that the lack of foreground diminishes the sense of depth. If the reflections were better, they might help with depth perception, so I think it is possible that this perspective could work in the right conditions. Getting around to it this late in the year could be problematic, however.
Posted by Anvilcloud at 6:29 am

I like something in the foreground usually but reflections work well too. The small shorebirds are a great example where reflection can be great. That you for this post.

I like so much hearing about your intentions. I just walked into the bush of flowers yesterday, after the rain finished. Thus some photos were taken. All I'm saying is, most of my photos are accidentals. So it's really interesting to hear of your decisions.

I still like the original the best. But they are all nice.

The way you plan out (and then tweak) shots is fascinating. I like the distance of the mill in the first photo; it lends an ambiance to the scenery, yet doesn't overpower it. I don't think it should be the focus from my non-photographer perspective. ;)

You teach as well as play with your photos! I love them.

Yes, that top photo is a winner.

I do enjoy your discussing your philosophy and intent with your photos…… it feels like I am privileged to have private lessons from a master. I thank you for writing and your efforts.

Good photography is a lot of work.