A few posts back, I wrote that I was somewhat less than enthusiastic about going out for more blue hour photos. I think I've posted some good ones in the past few weeks, but I also think that I have got the shots that most interest me. Sorta I bin dere dun dat feeling.

I mean, I have the hang of it now. How to compose and how to expose and so on, so it becomes a bit of a rinse and repeat scenario. Still, I may do more, as I also consider it a bit of a project for community interest, making photos at a time when most people are asleep or busy, of subjects that they don't see in those conditions. Townies on FB seem to like seeing them.

Beyond that, something is better than nothing. Winter is coming, and I will get out less and less, and I won't be getting out at all if and when I have my foot fusion surgery. And so I make hay whilst the figurative photographic sun shines.

There's not a long window of opportunity to get these shots. In this instance, I don't mean about winter coming, but about the fact that the right conditions come and go very quickly on these mornings. If I photograph too early, the sky isn't blue enough, but if I leave it too late, it gets washed out by the rising sun.

That's what happened in this first photo on a morning when I was feeling quite humdrum about it all. I got out too early, lost patience, and snapped the photo anyway. The colour wasn't yet there properly, so I edited it as a black and white. I do like how I salvaged it. It's a thing in at least some b&w photos that the sky can be made very dark, for effect, and that is how I chose to process it. 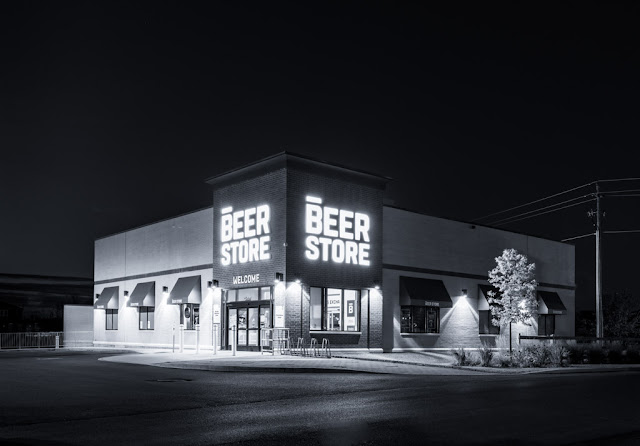 I will say more about The Beer Store, in a minute, but first I will show you my other photo from that morning. Just 12 minutes after the beer store shot, the sky was just about perfect for this next photo. 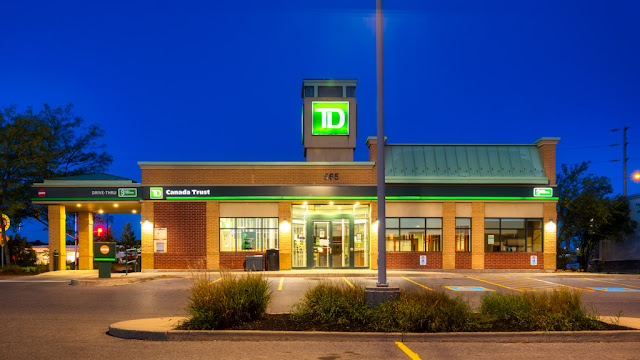 I made the choice to use the flower bed for foreground. Unfortunately, that left me with the  pole in the way. In post, I made some effort to photoshop it away, but I wasn't happy with my effort, and it doesn't really matter anyway in the long run. It's just my little picture and doesn't have to meet with anyone else's approval. I am happy to have captured the colour and the light well once more. That is sometimes good enough.

Now, back to The Beer Store.

It's government run – sort of. Actually the beer companies run it under government license as I understand it. At least that is the way that I am putting it for ease and simplicity. I understand that it stems from more puritanical times when a more conservative and religious Ontario didn't want booze shops on every corner. It is only recently that some grocery stores are permitted to sell limited amounts of the devil's drink.

We also do this with liquor. We have the LCBO stores (Liquor Control Board of Ontario). The local one is in another part of this mall. Maybe I should photograph that one day.

I know this system must seem weird to strangers, but we are used to, for it is the way that it has always been done.

In Maryland liquor, beer and wine are sold in privately owned liquor stores not in any grocery stores. Here in New Hampshire, beer and wine in grocery stores, convenience stores, everywhere. The hard stuff is sold at state run store only. Each state has different rules.

We had the same thing in Pennsylvania for a time. State Stores. Now we have wineries and breweries on every corner and the stores sell liquor. There are still state stores, but they are a place you go when you are looking for the fancy stuff and the hard stuff.

I remember a few years back living in a dry community in another area of NC, which was on the border with SC. So all kind of parties started over the border, where there were quite a few stores selling beer, wine and perhaps hard stuff. I think I was happy enough to do without. Now we have lots of beer in groceries, and so many breweries we compete in Asheville to be the beer capital in some kind of contest. The colors in that last photo are surreal!

Our state is pretty liberal with their liquor distribution. Previously I lived in a state where they only granted so many licenses state wide and they had strict hours they could sell. If you wanted a bottle of beer on a Sunday afternoon, you were out of luck.

Where I live now, the state issues pretty much unlimited licenses as long as you meet a few not strict requirements. As a result, you can by booze in just about any store from a gas station to a grocery store and what ever hours they choose to remain open. Pretty much you can buy it 24/7/365. The only restriction is that all booze must go to a state warehouse where it is recorded and stamped before it can be distributed to local stores. So if you are looking for a rare bottle of something or order, it is hard to get your hands on it unless you are a friend of a store owner with deep pockets and some pull.

Yes, the black and white image has real power, but so does the sky in the colored picture.

Love the transition to B & W. There is no possible way I would do blue morning shots. If I were up then I would not be awake enough to push the button. Now, sunset, maybe.
My mother told a story of driving from Winnipeg to Ottawa during WWII. She and my father were seized by thirst somewhere en route. they stopped at a tavern and my mother had to drink her beer outside sitting on the steps, as women were not allowed in. She still was a bit steamed about it, even when I was old enough to get a story about drinking. Ah, the liquor laws.

I think you just need a liquor license to sell it here in Hawaii. You can find liquor in most grocery and drug stores.

I remember once while visiting Utah and wanting to buy some beer that we had to go to some nondescript unmarked building to buy it. I'm not sure if it's still like that or not. Love the blue hour color.

I like both those pictures, for what they are and then what you got.

In Norway beer and low percentage wine could be sold in supermarkets, anything stronger could only be bought in state run liquor stores. No alcohol could be bought after six o'clock on a Saturday, not at all on Sunday, holy days and election day. You get used to it and shop accordingly (abroad mostly).

Nicely done, again. I love your turn of phrase.
Do you have a date for your surgery? I've forgotten if you have said. No surprise.
The B & W is terrific.