Memory of a Busby

We have seen much of the Queen's Grenadiers in the past few weeks — the soldiers in dress uniform who wear the hats made from bears' fur. You know, the big furry hats that seem to come down over their eyes. 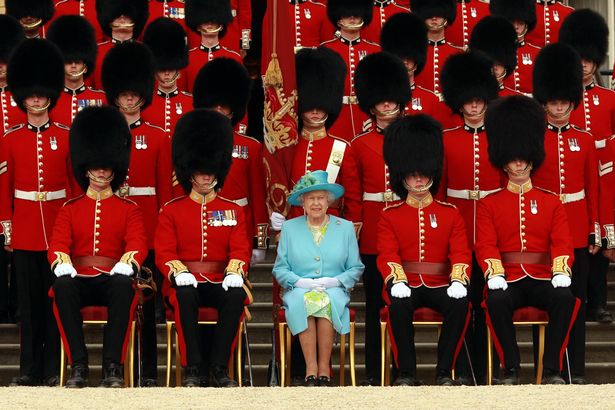 Yes, unfortunately, they are made from the pelts of actual bears. Despite calls by some to use artificial fur, they still employ the real thing, and the real thing is getting quite expensive.

We call those hats busbys, and basically also call the soldiers who wear them busbys, but busbys are really the hats and not the soldiers.

In Canada, you may see them standing on guard at the Governor General's residence in Ottawa. I think we also see them during summer at the ceremonial Changing of Guard parade during the summer on Capital Hill.

I don't know how many times I have seen them without ever remembering what is, I suppose, my very first connection from when I was very young. Despite all that we have seen recently, I did not remember this until something about busbys came up in conversation during our kaffeeklatsch this week.

For whatever reason, I suddenly remembered my little toy soldier, busby bank when I was a boy. I possibly had it sometime between the age of 5 and 10 (probably closer to 5 than 10), so it was 65 to 70 years ago. I am almost certain that I haven't thought of my little soldier bank since then, for why would I? But then at coffee of all times and places, the memory surfaced. The recent ceremonies didn't evoke the recollection, nor the several times that I have seen them in person, but a chance remark over coffee took me back to that little toy bank.

I wish I could find an image of the little bank, but of course I can't.

Busby is the English name for the Hungarian prémes csákó ("fur shako") or kucsma, a military head-dress made of fur, originally worn by Hungarian hussars. In its original Hungarian form the busby was a cylindrical fur cap, having a bag of coloured cloth hanging from the top. The end of this bag was attached to the right shoulder as a defence against sabre cuts.

If you go to the Wikipedia link, you will see that a busby hat doesn't have to look exactly like those with which we are familiar. Any military hat that fulfills the above definition is a busby hat. Who knew? Not I.

Posted by Anvilcloud at 5:53 am

I've always wondered how they tie their shoes after their hats have been strapped in place. Do they have someone to keep them from falling over?

That is a fun memory!

I didn't know they are made of real fur from bears. I hope King Charles changes that tradition. Why not use artificial that looks just the same and doesn't require any killing?

I find sometimes a memory pops into my recollection like it did for you. It’s good to embrace them when it happens.

A statement made in February 2022 after a petition was brought to parliament.
‘ Bears are never hunted to order for use by the MOD. Our suppliers source pelts made available by the Canadian authorities following a licenced cull as part of a programme to manage the wild bear population; Provincial, territorial, federal and international laws provide strict trade regulations to protect against unlawful trade in black bears both within Canada and internationally.

Bear pelts that are used for the Queen’s Guards ceremonial caps are the by-products of these licenced culls, as opposed to fur being harvested from an animal being bred for this sole purpose. Therefore, any reduction in the number of bearskins procured by the MOD would not equate to a reduction in the numbers of bears being culled.’

How interesting, never having thought seriously about those hats. I like the idea of your little bank, and am glad you had that memory! We are now the holders of wisdom (us elders) and can spout forth some amazing and silly things! (And then tell those young'ums that those were the days!)

A wonderful old memory came back from somewhere.

This is all new and interesting info to me. Thanks Seemed like fake fur is the way to go, but when I looked it up it seems that is made of carcinogenic materials. Eek. I don't know which way to go anymore.

This is really interesting. I had no idea that they had a name or were from bears. Or in Canada, for that matter. I was intrigued when one fellow collected all the pallbearers busbys as they lined up to carry the coffin.

It's funny what relation ships we make from time to time.

We've certainly had a good look at them these last couple of weeks.

I knew that the hats were made of breaking which always struck me as curious. How long has it been since you folks had bears over there?

Oh poo. I see that you are not from England. Sorry. I know Canada has black, grizzly, and Kodiak. My apologies!

I think it's time to switch them over to regular service caps.

Real bear fur? That must be awfully heavy and awfully warm.

Regarding the busbys: Did you know that you can tell the regiment by the arrangement of brass buttons on the tunic? Grenadier Guards have evenly spaced buttons, Coldstream Guards buttons are in 2s, Scots Guards in 3s, Irish Guards in 4s, and Welsh Guards in 5s! And the plume in the busby is different colours... Grenadier Guards white, Coldstream guards red, Scots Guards none, Irish Guards blue and Welsh Guards white/green/white.

I often wondered about those hats and now I know as I often say, the rest of the story, so thanks, AC.