Forgetful with a good Memory

Just two days ago, I posted here of remembering a photo that I had taken 6 years ago. Some commented that it was indicative of good memory, which is the opposite of what I often post about, for I am also a forgetful sort of chap.

In this case, not only did I remember the old photo, but I also recognized that it must be the same lady that we had just seen again in the present. I made the connection even though we hadn't met and spoken back then, for I had photographed her rather surreptitiously from a distance.

Here ↓ it is again for reference. 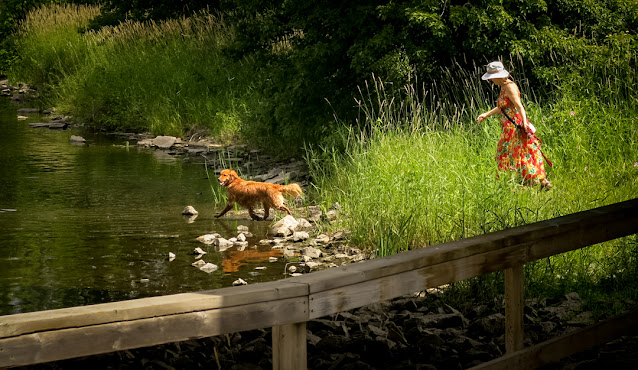 Yes, that ↑ was 6 years ago, but I must confess that I had thought that it was only 3 years. I guess it's true what they say: Time flies when you're having fun.
So, how is it that I write about being forgetful, as I did here describing a day with Jonathan, and, subsequently, even posted a tee-shirt↓  but then remember a photo from 6 years ago? The two things — forgetting and remembering — don't seem to jive. 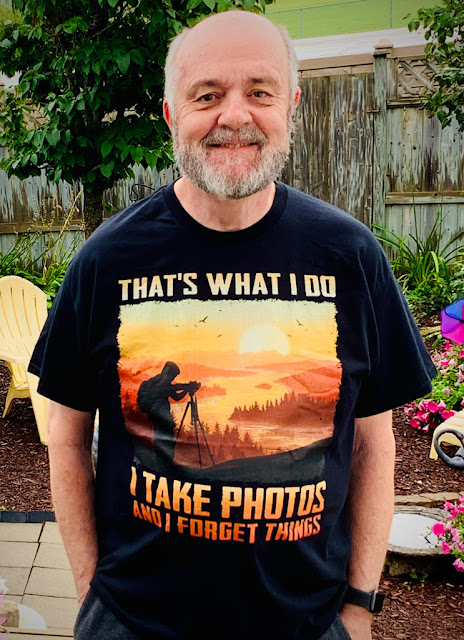 For one thing, I have probably come across the photo of the lady and the dog once or twice since then. For another thing, I think it's a whole different sort of memory. After all, there can be a lot that goes into a photo; it's not always a quick snap that one never thinks about again. First, I took the picture; then I edited it. After that I posted the image in more than one place, including this blog. You see, it wasn't just a random snap that I completely forgot about the moment that I pressed the shutter.
Now, contrast that with the day with JJ when, among other things, I forgot to get the potatoes from his place when I was picking him up. At the time, I had other things to remember such as where to take him for breakfast and what other things we might do that day.
In point of fact and in some sense at least, I think that I actually have a pretty good memory. However, at the same time, I am also absent-minded when it comes to mundane, daily tasks. My brain gets wrapped up in other things than what it would be good to be thinking about at any given time, and I my temporarily lose my place, so to speak. It's not so much that I forget about the thing entirely (whatever the thing of the moment happens to be), but that other things move in and occupy my brain in the meantime.
At some point, something often triggers the thing back into memory. It's not like it was gone completely for all of eternity, but that it just got shunted aside for awhile. I do tend remember the thing when my brain gets back around to it. It's not that I necessarily forever forget that I should have picked up the potatoes, but more that I didn't remember at the most convenient moment, like when I was actually there where the potatoes were.
In other words, I am an absent-minded, wool-gathering sort of guy, suffering from temporary but not usually permanent amnesia.
I don't think that I am describing it very well, but this is probably the best that I can do at the moment, and I hope that reconciles the apparent contradiction a little bit. I think that I have a pretty good memory, for some things at least, but I often temporarily misplace things in my head until something or other dredges them back to the surface from the deep recesses of my puny brain.
=================
Addendum: an example of absent-mindedness that is not exactly forgetfulness.
Last evening: I took my water flask downstairs to fill it with cold water from the pitcher in the fridge. I did just that and then saw that I needed to pick up and rinse the cat's dish. After that, of course, I proceeded to come upstairs without the water. Also, of course, I remembered straightaway  to go back down. This morning, I also remember that this thing happened. Now that I have posted of this, I will likely remember the incident for a little while, at least. I do this kind of thing quite a lot, but when I don't think about it and write about it, I can't remember too many similar incidents.
Posted by Anvilcloud at 7:13 am

My forgetfulness seems to go in streaks. And I usually don't worry much about what I forget.

DJAN is right on about how we can focus so much on memory or forgetfulness, that we get carried into another time, and less attention is being paid to to moment we're in. And being frustrated definitely comes into play for me. Stress of any kind seems to push my mind into the survival mode. Then there's the talk about short term memory vs. long term memory, where it's possible to remember many ancient times but completely forget two hours ago. I'm trying to remember all that happened last weekend, and having big troubles!

It's the multi-tasking that plays havoc with our short-term memory.

I agree with Vicki about the multi-tasking. Our memories are mostly good; it's the retrieval systems that are faulty. I've done that water flask move too many times to count. Absent-mindedness can be a personality trait which gets more extreme as we age, like most things. :)

As your absent-mindedness is something that you feel is developing…. In my mind it is “ok”…. I have lived with an “absent-minded”
brain my whole life….. you get used to it. 😜

Vicki is right. The multi-tasking is the worst for my memory too.

It sounds was if your long-term memory that remembers who you sat near in kindergarten (me, Marnie Quinn, why?), is in good shape. It's the short term and very short term that blinks a but. Mine, too. Why did I come into this room, again? Well, while I'm here I'll do this and that, then go away and remember why I went into that room. Try it again, same story..

I share your pain. My short term memory is a disaster. I am far away thinking of other things.

I am forgetful AND absent minded. I'm very grateful to Alexa for reminding me all the time.

That is an awesome t-shirt! The silhouette even looks like you.