Our bedroom faces west, or more or less anyway, and with Thursday night being clear, the Sturgeon supermoon, was shining upon us quite brightly. After I trundled to the commode sometime before 4:30, the lunar lure would not allow me to return to slumberland. I did try to fight it for awhile, but the mighty sturgeon won.

I took my time once I got up because in my head I thought that I might be able to photograph it with a reflection when the big fish descended a bit lower on the horizon. Nevertheless, I was out in the car, not too long after 5, heading toward Riverside Park.

However, on my way to the park, I decided to stop on Lake Avenue as I neared downtown because I thought the moon over the street with streetlights below would make an interesting photo. I set up the tripod, waited for a vehicle to enter the frame, and pressed the shutter. 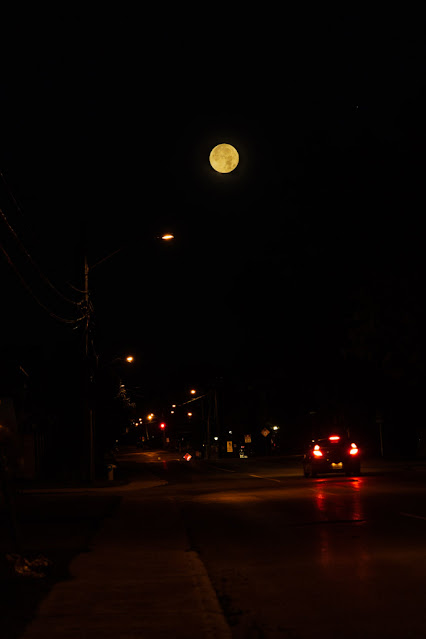 That  ↑ photo, and in fact all of them are composites. The moon is really very bright and will easily become just a pure white circle in the sky if I expose for the ambient light. So, I take an exposure to capture the moon, but that renders the rest of the scene black. I then take a somewhat brighter exposure for the scene: not too bright, of course, because I do want the viewer to see a little bit of detail in the scene.
I did the same thing for the next images once I got to the park, but I went a little further in this ↓ first photo: one exposure for the general scene, one for the moon, and a third for the reflection. The two moon shots are more zoomed in to make the moon larger than it would have been in the capture of the whole scene. In the final image, the moon and reflection seem to be as I experienced them in person, but they had become very small in the camera when I exposed for the big scene.
The next photo is a closer view, but the technique is the same – one exposure for the scene and one for the moon. 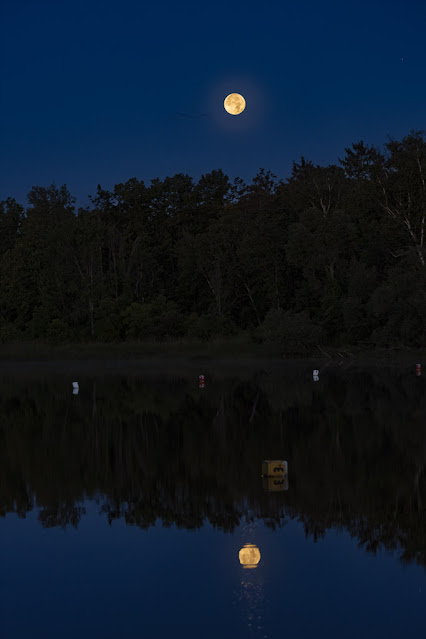 Finally, I switched to my telephoto lens to capture the moon as large as I could. I kept just a little bit of the trees in the lower part of the frame to add a little bit of contest, but the those treetops are barely visible at this resolution. I really should have stayed until the moon was closer to the treetops. 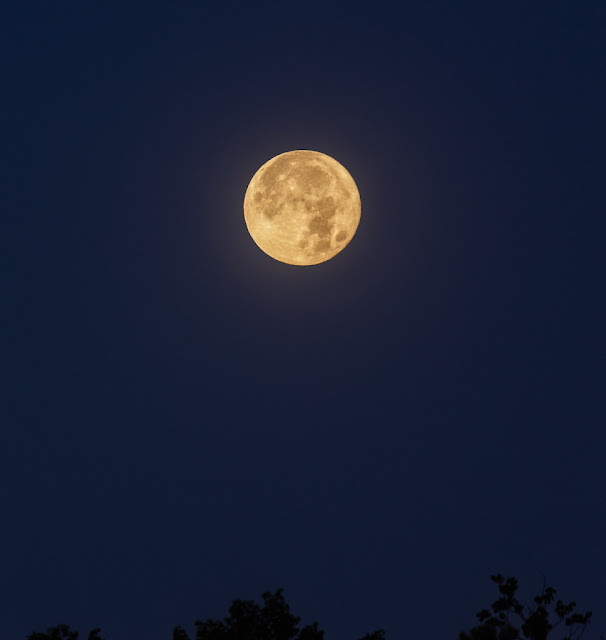 I hadn't  planned on this photoshoot, but it was good to get out, for I have been neglecting my photography lately.
Posted by Anvilcloud at 6:48 am

Such energetic coverage. All I did was look out the window and admire it.

Funny how life gets in the way of stuff!
Nicely done. Thanks for explaining it all. One does get curious, but not likely to go out and capture it!
I was up at 2:30 and 4:30. Once to close windows. I liked the moonlight, but failed to find the energy to go out!

Those are beautiful and the process is fascinating.

I'm impressed by your dedication. All I did is look out at 3 am for a few seconds and then back to sleep.

Oh, what AWESOME-NESS! As usual your photos are absolutely amazing! They’re truly BEAUTIFUL! Thank you for sharing this inspiration with us.

Wishing you well, my friend! Have a wonderful weekend!

Hi AC ...your pictures look like some of ths photos I get daily from this:

Astronomy Picture of the Day Archive 2015

It's put out by NASA and they give a write-up to go along with the photo and often they will tell exactly how they photographed it. I think you would find it intereating and the archives go from the end of 2015 to the current date.

Like most,of,your commentators, I looked out the window. In my case, through the porch screen. Bravo,for chasing the best shots. The landscape reflection is spectacular.

All are lovely. The reflections really up the ante.

The Sturgeon Moon hit on my birthday and as I looked out the bedroom window that night before going to sleep it was shining as big and bright as a searchlight in the sky. Your photos -- all of them -- are fabulous. The composites are perfect, especially that first horizontal with the reflection. Fabulous.