It doesn't happen nearly as much as it used to, but we had an afternoon with the boy.

He's been into geocaching with friends but needed some help from someone with a car to get him over the hump. You see: if he could find one more cache, he would be allowed to hide his own.

He knew there was one by the trail (where we bike), fairly near the arena. Below on the left, he and Amma (Sue) are searching. He found it (image on the right). 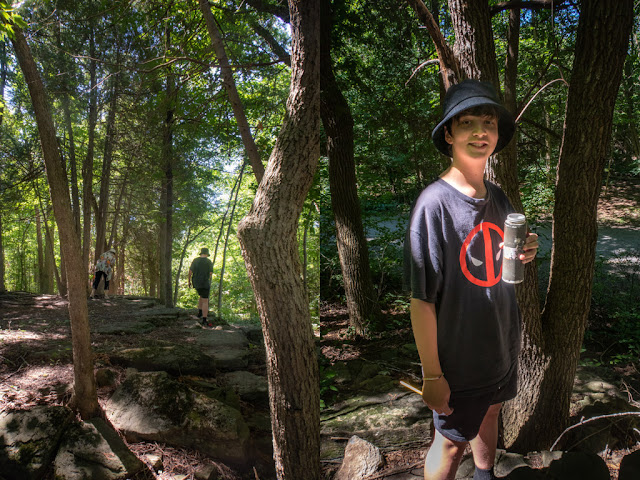 He wasn't done caching, but first I had to spend some cash for lunch at McDonalds. 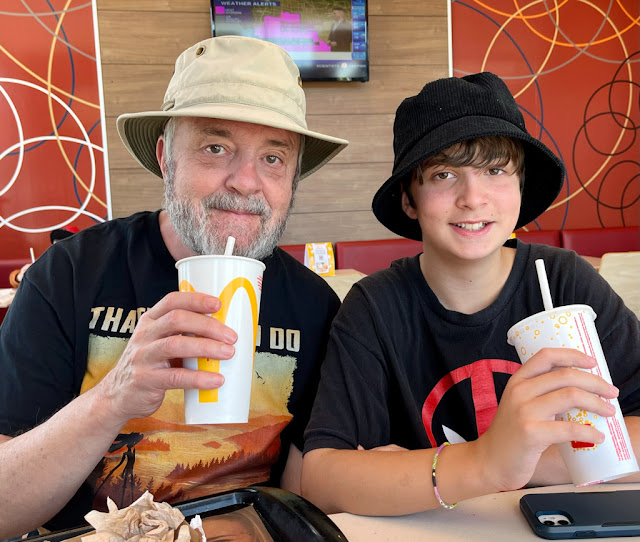 The second stop ↓ (left) after lunch was quite easy to find. The third stop (right) in Almonte (another town) was a failure with the prize somewhere in the grubby bramble beside a parking lot. We both moseyed through the grass and weeds looking for the treasure and hoping that we weren't picking up ticks. Unfortunately, we didn't find the cache; fortunately, we didn't pick up any hitchhiking ticks.

He scored on his fourth try in the heart of Almonte. Crowds and parking prevented us from leaving the vehicle and documenting the find, but he had discovered the cache in short order. JJ was also successful on his fifth and sixth explorations ↓ which were both difficult finds in paces where Ammas and Buppas couldn't go. 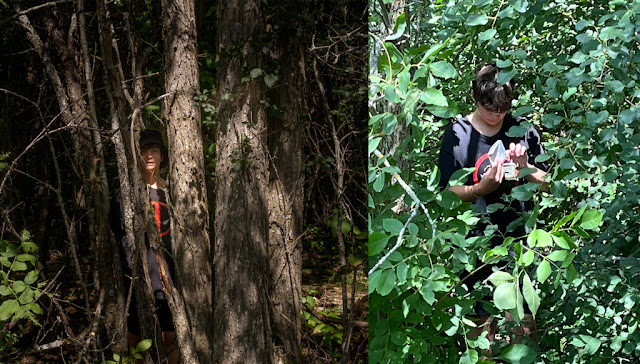 Several other caches were unattainable on this day. Two, we had to drive by because they were on a busy road with no place for a car to pull off. They must have been placed by kids on bikes. There was also this one ↓ where the road was too terrible for the car to venture onto. He was beginning to walk out of sight when I whistled him back. When the kids were little they would always respond to my whistle, and by golly, they still do – both of them, as I recently discovered with Danica when she couldn't find me in the parking lot when I was picking her up after work.
He was becoming a little speck ↓ so I whistled. 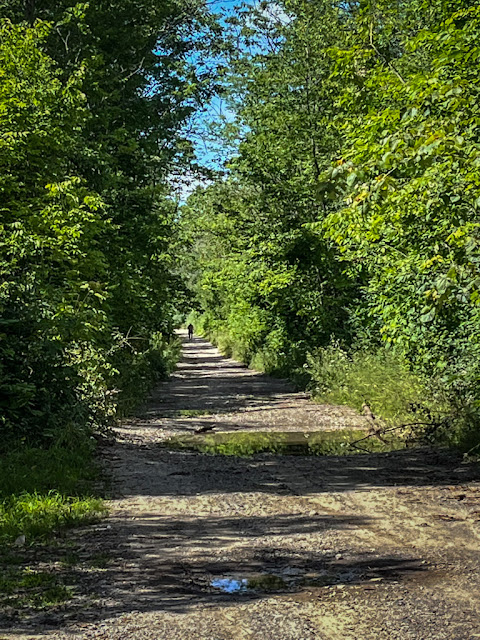 I'd say it was a successful scavenge, for he scored 5 out of a possible 6 searches, and now he can hide all of the caches that he wants. I hope he chooses to place one in the park and trail near us.
Posted by Anvilcloud at 6:26 am

What fun! Your pictures and description of the adventure were quite delightful to experience. Thanks and congratulations to JJ.

Oh boy, another searching adventure! Fun when you do the hiding too!

What a delightful outing! John used to geocache with his two daughters and enjoyed it a lot. I would find it terribly frustrating. :)

A fun hobby! I haven't heard of folks doing it around here.

This looks like a fun day. I look forward to the time our grands are old enough we can do that with them!

Sounds like lot of fun. And if it's some Grandpa time it all the better.

It sounds like a fun day. I've never done geocaching but it is (maybe was?) very popular here.

What fun. Now that he is an accredited cacher, he might consider Amma and Buppa specific routes.

I cannot get over how the two of you, your grandson & you, look so similar, especially in that photo at McDonalds. Geo caching teaches so many skills, good for JJ tackling to get to the point he can hide some now.

@Patio. The facial similarity is strong but has only been apparent (to me) recently.

This reminds me of my grandson and his Pokemon searching app.