An Order and an Edit

Last week I was contacted by a lady who had seen my photos at the cafe (where I haven't been for six months) and wondered about purchasing a few prints for her husband's birthday. She was looking for photos not necessarily like the ones hanging at the cafe at that time but specifically for recognizable places in our town that were also on the brighter side.

Hmm ... bright photos could be a problem because photographers tend to take a lot of photos in lower light toward the beginning or end of daylight hours. I dragged a few possibilities into a separate Flickr folder for her to peruse and also suggested a few of my other albums that she could look at.

She made good choices with these two photos. Both the one of the railway station with the peonies in foreground and the one of town hall in golden hour qualify. They are both of recognizable places and are bright enough. 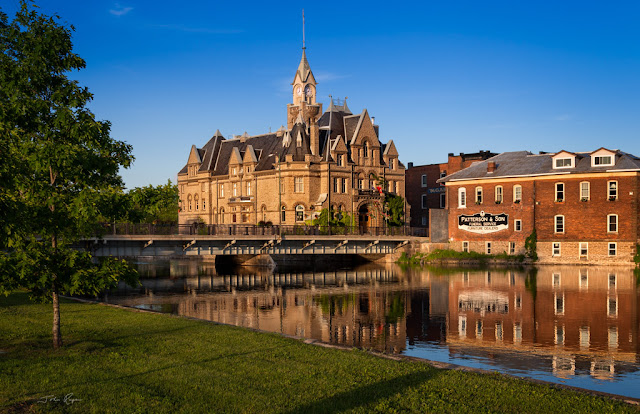 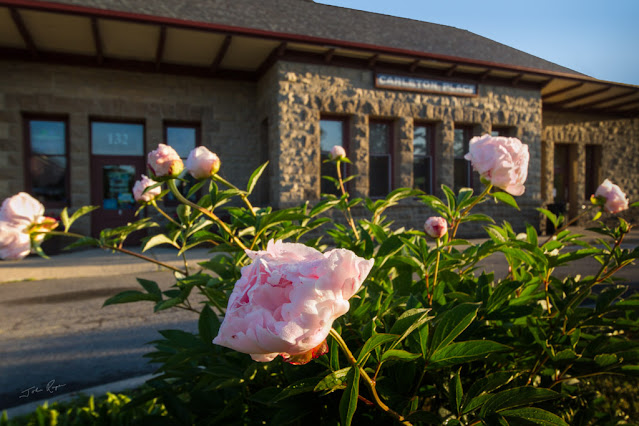 Her third choice of the whitewater by the old mill puzzled me. 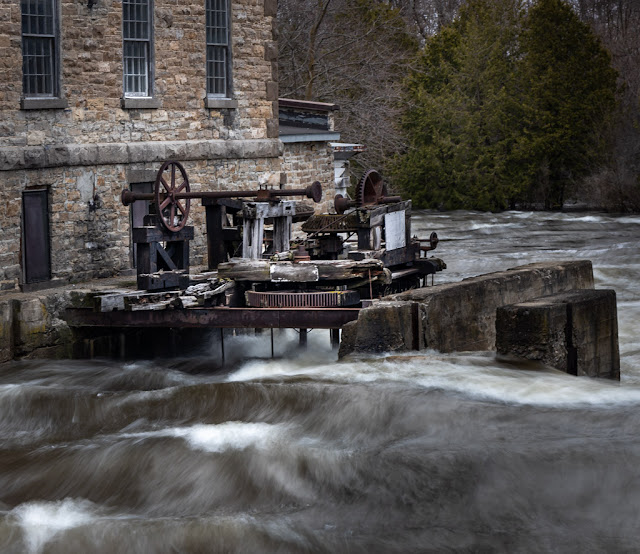 While the photo of the mill is in keeping with the recognizable features theme, it didn't seem to qualify as bright. Also, the crop would not have matched the other two photos; it is closer to square while the others are closer to a 3x2 ratio, which also meant that I couldn't print it as large.

I went to work. Going back to the original photo I uncropped it. I had cropped it, particularly on the right because there were many stray and distracting branches. I then photoshopped the branches away as best I could and also tried to give the photo a bit more pop. 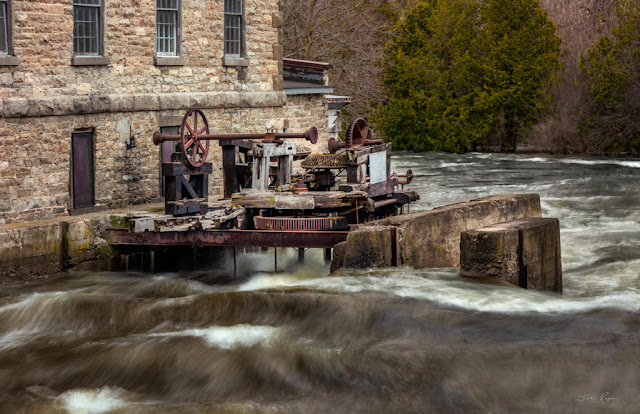 Although I had been somewhat surprised by her choice, I must say that the final print actually looks very good. Prints can be that way, very often looking more appealing than their digital counterparts, especially when the print is a fair bit larger than the online version.

Fabulous photos. I like the one with the peonies in the foreground. I wonder if the mill photo, the equipment has a personal story for her & her husband.

You are a very talented photographer. I like the peony picture as well.

Great trio (the revised version) for a present.

I like the town hall photo. Something majestic about that building.

These are great prints AC. You do great work!

I like all the photos, especially the town hall. I'm glad that they turned out so well!

I like the peonies, the softer flowers take away from the harsher building lines.

I've always wanted to live along the water in a river town.

Yeah, all three look bright enough. You did a good job on the last one. Congrats on making a sale. Money in the bank, sir!

Congratulations on selling three more photos first of all. And I love the Golden Hour of the first one.

I love the mill photo. Somehow it brings back memories of Yorkshire when I first went summer last year. I'm not a photographer but I so use an app called VSCO (developed by professional photographers) to edit my mobile-taken photos.

These are all three technically excellent and splendid in their use of light. I keep swearing I will take brush cutters with me on photo shoots to prevent having to crop branches out afterwards - but I never do. The mill shot is especially appealing. Good stuff!

I too like the third one uncropped. Nice stuff.

The final print does work well.

All the photos are very nice.... but I especially enjoy the first one.

The first one is my favorite. :)
Nice to have someone requesting your work--congrats! :)

How nice to have someone contact you with such a special request and one that resulted in a sale is even nicer. Kudos to you on the fine photography and printing as well.

Beautiful! What a great birthday gift!

It's really fabulous that you can use Photoshop to really enhance photos that you already like.