It was a dull day with no fresh snow: not the type of day that calls for photography. But I went out anyway, briefly. I dropped Sue off at her exercise class and went to the old railway/new trail bridge. This photo, looking upriver toward townhall, was acceptable (to me) once I turned it into a monotone. 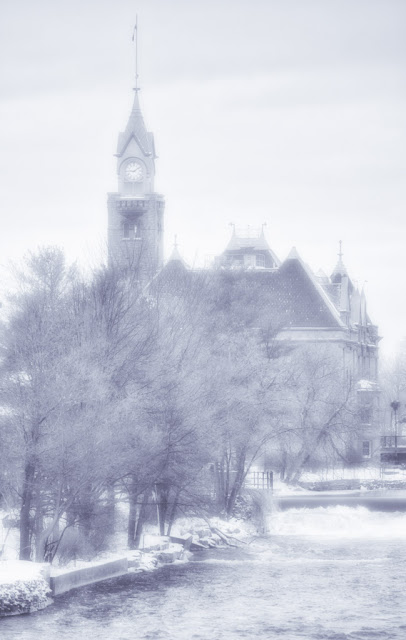 Just a little later, I stopped at townhall and liked this setting with the barrier and the venting smoke behind it. Also monotone. 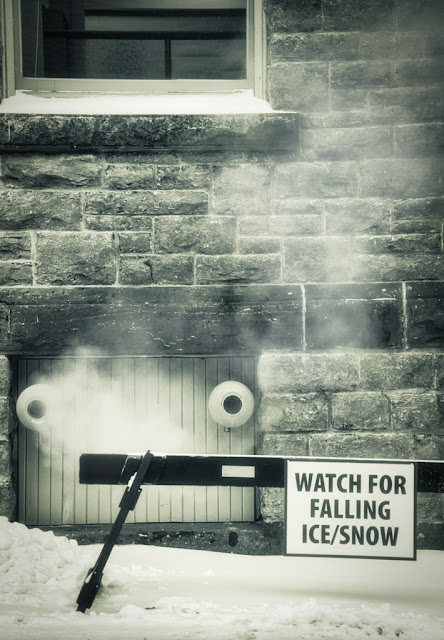 Just getting out and shooting, which I haven't done much of, was pleasant, and while the results weren't earth shattering, they satisfied some sort of creative need within.

Although I have titled this post, Bad Day Photos, there are those who say that there are no bad days; there are always opportunities. Maybe that is true.

Ah, those argument with spellcheck--I have them often.

Getting out in the winter is a victory for me. I’d rather stay inside and read or anything else. It was good you ventured forth!

I like the second shot. The first might be a good subject, but seems out of focus, and my eyes are disturbed by that.

Spellcheck had a bad teacher. Your second photo has monster eyes. Watching for falling ice, obviously. Love it.

Ah, the mysticism of that first photo. I love it! It could be on the cover of a book.

Spell at will on your blog, AC! Nice post

That's why we have fingers, to override spellcheck and type townhall. Exactly what I would say and I worked in and for one for 13 years. And we still have it.

One thing is for sure, getting out and about will at least provide you with photographic opportunities which will not be possible if you stay indoors.

Good work getting out there.
I love these photos. You have a keen eye. Maybe you are too hard on yourself!

This is like me and livingroom. It just seems like one word, but spellcheck tells me it's not. After all... isn't it bedroom? But I guess dining room is two words too. Ah well.

Your first shot particularly stands out.