I didn't post it yesterday with the other photos, but there was a tree that I really liked. I think you will see why. I think you can see why I like it with that almost bare centre but very leafy on the sides. 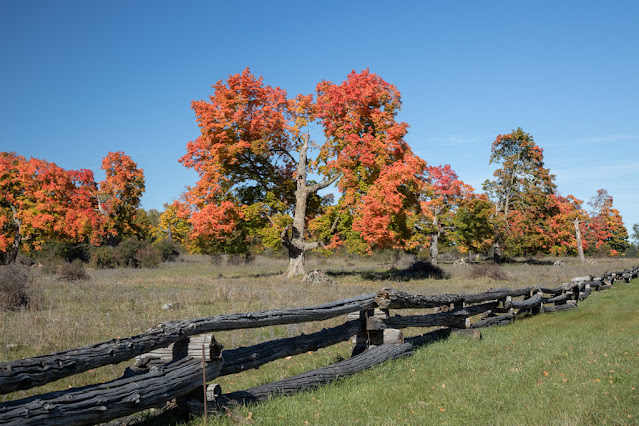 While I love the tree ↑ I didn't love the lighting, so I returned the following ↓ morning. By the way, I am sort of in the next photo in a way. Can you see me? 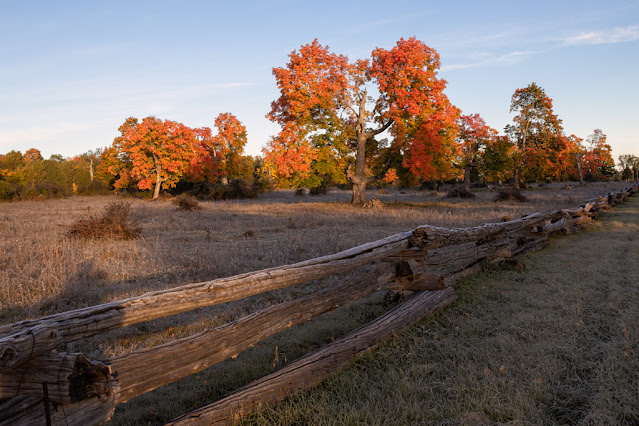 While I like the second photo better than the first, I thought I might do better later in the day. So I returned late afternoon, hoping that the sun would be behind the tree for backlight. My angles were off, and I got side lighting, which looked like ↓ this. I think it is a much better photo. 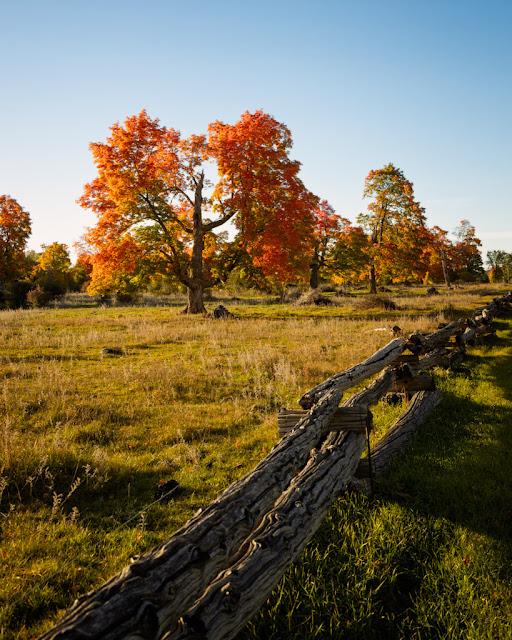 In all of the above versions, I included the fence for a bit of an added element. I guess I can't exactly call it a leading line because it doesn't quite lead to the tree, but diagonals are still considered to be good compositional elements.
Finally, I got closer and photographed the tree larger and without the fence line, and I think this ↓ is the version that I prefer although I like the above one too. 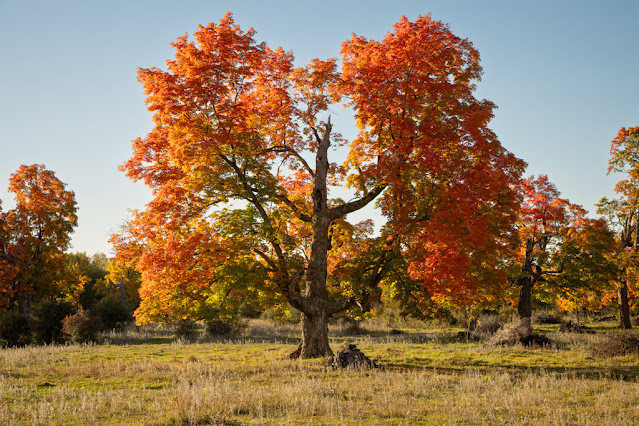 Lighting does make quite a difference. While backlight would probably have been even better than the sidelight that I got late afternoon, you can't have everything. I would have preferred some clouds too, but as I said . . .

Posted by Anvilcloud at 6:43 am

A very interesting shape to this tree. I like the side lightening photo & in the second photo I did spot you as a lengthening shadow :)

Hope your back isn't playing up to give you grief.

Last one is the best.

That last one really stands out.

Yes, I agree. The last one is the best.

Being of the contrary nature, I like the fence included...but all are certainly good renditions of the same really beautiful tree. It's pretty amazing how different times of day give such a different feeling.

The lighting does make a huge amount of difference. I love the last two shots, especially the one with the fence. I did see the shadow of you!

I'm torn between the 2nd and 3rd ones.

Good photos! I like the last one best but they're all good.

Some nice fall colors
Coffee is on and stay safe

What a great leading line formed by the barricade. The trees are so good with that unique look about them plus the autumn leaves.

I find this tree so odd! Here they cut trees like that because of power lines so that when we get ice storms it protects the power. (They look hideous!) But that one -- out in the middle of nowhere! It's fascinating and looks beautiful because that's the way it should be!

Well, come on! You want clouds? Just put some in! You had great fun experimenting with these photos.

Amazing how different each photo is. I'm partial to the 3rd one with the fence.

I tried to photograph our morning clouds and I didn't do well. By the time I figure these things out, the moment is gone! I could have used a lifeline to you and your experience. Ah well.