Although they certainly let us know when it is feeding time, cats can be inscrutable if they so choose. They are not always quick to reveal what they know and remember.

Early this summer I would sometimes head out with the camera very early, even before 5 o'clock. At the beginning of the season, Lacey would come downstairs with me with the expectation of a feeding. But I had discovered that if I fed her breakfast too early, she'd act like she'd never had it in the first place. She would get in tune with her hobbit side and demand a second breakfast.

Somehow, and I don't know how, she had made a connection with early hours equals no breakfast and stored it in her memory.

Then, there is the case of lap time with Sue.

Usually, Sue and I watch a little tv during and after lunch. After lunch, Lacey would frequently grant Sue lap time. However, not long ago we noticed that these sessions had all but stopped over the summer. In fact we had just remarked on this when the cat came back.

You see, as the weather became a little cooler, Sue had cause to get out the sweater that she hadn't needed all summer. Apparently, said white sweater is important to Lacey, and she was on Sue like a flash, purring loudly. 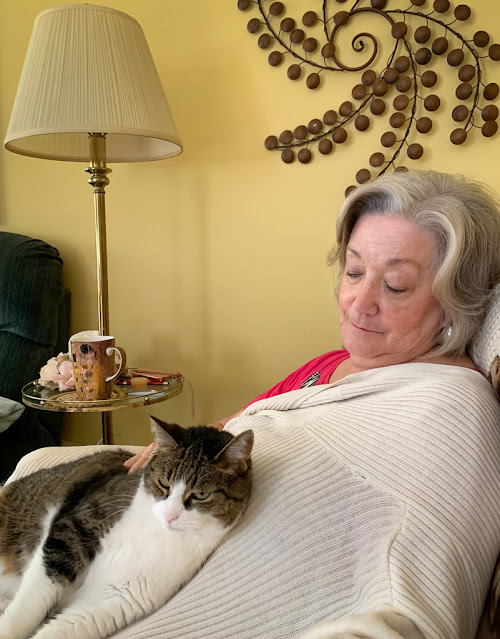 It would seem that her little brain connects that white sweater with comfort or at least something good, and, much to our surprise, she remembered this, months later..

Posted by Anvilcloud at 5:50 am

Oh, those four legged friends are quite smart about things like this. And memories of comfort are never gone from a cat's head, methinks. :-)

And the true test of the sweater would be if you had put it on, AC. Somehow I think Lacey has the who figured out pretty well too!

Cats have us all figured out while we're still studying them.

I find cats (and their thought processes) charming although sometimes inscrutable. That's sweet about the sweater!

Lacey is such a beautiful cat. I am sorry to read you are still having such back pain.

Of course white sweater is a favorite. It's white. She's black and white. There will always be some of her left behind! (And Sue looks like she's a welcoming lap!). Does Lacey have the same savings time adjustments Lizzie does? She'll start asking for dinner pretty soon at 3 instead of 4 (and doesn't get fed till six but a cat can try.)

Cats are the way they are.