You may recall that our café was a causality of the pandemic – the one where I had a bit of a photo gallery.

I also hang a few frames at Sue's hairdresser's establishment. I hadn't sold any prints for so long (there was a long period when it was closed due to the pandemic) that I had all but decided to offer to remove them, thus allowing the proprietors to change the display if they so chose.

Suddenly, two of them sold – the photos, not the proprietors. Go figure.

I call this first one, Rust, White & Blue. It's a very early photo taken way back in 2012 on a December  day when conditions were almost magical. It's a bit of a time piece too, because, nine years later, the garage door to the boathouse is much duller. It stood out perfectly on that day, however. 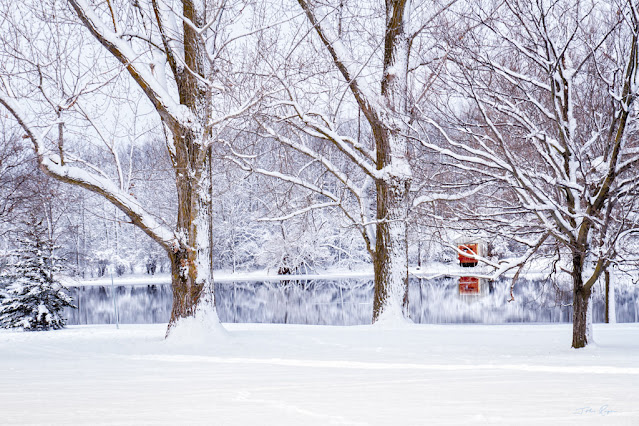 The other photo, On a Rural Road, is from just two years ago. I passed by the same place a few weeks ago and took a picture of the same fence and tree. I  composed it differently but ended up trashing it. It can be difficult to go back to the same spot because the light and the colour will be different. And then, one doesn't want to used the same composition, but the problem is that you may have already used the best one. 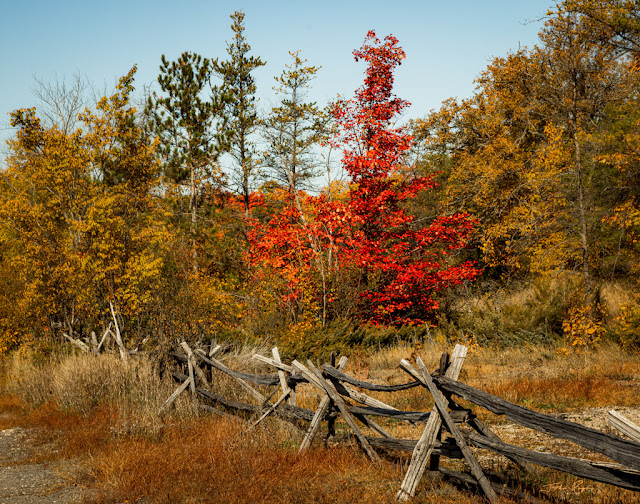 I'm glad that these photos sold, not for the meagre dollars involved, but it gives me some validation. More importantly, it provides impetus to keep on with this silly hobby of mine.

Congratulations on the unexpected and welcomed photo sales, AC. It is indeed a validation that your talents were not only admired but will grace someone’s walls.

You are a fine photographer and I really enjoy reading and seeing what you do.

You are a fine photographer indeed, and that first one is a keeper!

How great to know someone else wants to look at your work for many days ahead! THey are both very nice photos!

Those are outstanding photos! It is great to be rewarded financially for your hobby/

It's not a silly hobby at all! That first photo is a stunner. Your photos bring light to my grayest days.

Those are both beauties!

It's always gratifying to be wanted, or at least something you create is wanted.

Maybe it is time to find a real gallery for your work.

Congratultions. We have a small gallery here and the lady has said she would like to use my work...but she hasn't really seen much, just listened to some friends. I am debating...

Wonderful. Those are great photos. May your customers increase. :-)

Great that somebody took a look at your photos and decided to buy them.

They are both outstanding but "On a Rural Road" would really be a delight and colorful picture for any wall. What is the size of them and are they framed for sale?

PS: Sylvia Plath was a typical teenager and, although the teacher Mr. Crockett always had her read whatever she wrote (basically short stories of essays) to the class he was probably the only one who could (even dimly) see what lay in store for her.

You should be very proud of the "silly" hobby. You are quite good.

Yay! That's a wonderful affirmation of your creativity. They are beautiful photos!

Good for you. You must be pleased.