Trying for the Bones

The rest of the plan envisions all restrictions being lifted by the end of March, two years after the onset of this dreadful virus. Wouldn't that be grand?

The trees are largely defoliated now, but sometimes I like to see the trees with a combination of colour and branches or what I call the bones of the trees.

I checked out the park for suitable trees in mid-afternoon and saw some possibilities in good light. Unfortunately, when I got there with camera in hand a little later, the skies had mostly clouded over. The light resumed a little bit at times, and I tried my best because I was already there and so was my camera. Here are my efforts. 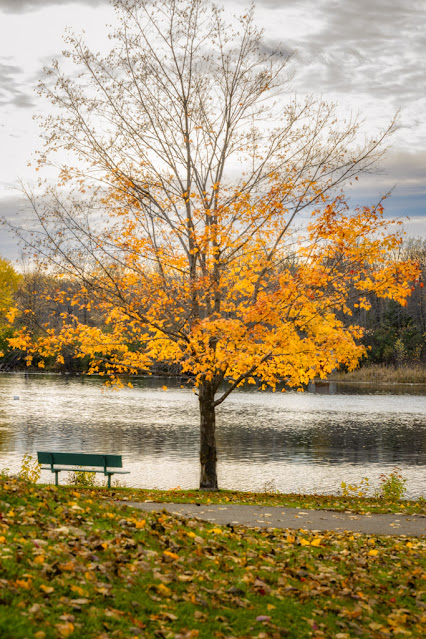 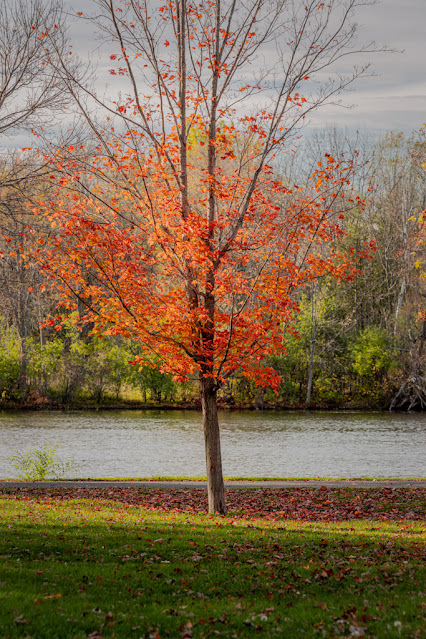 I shot some photos along the verge by the water. 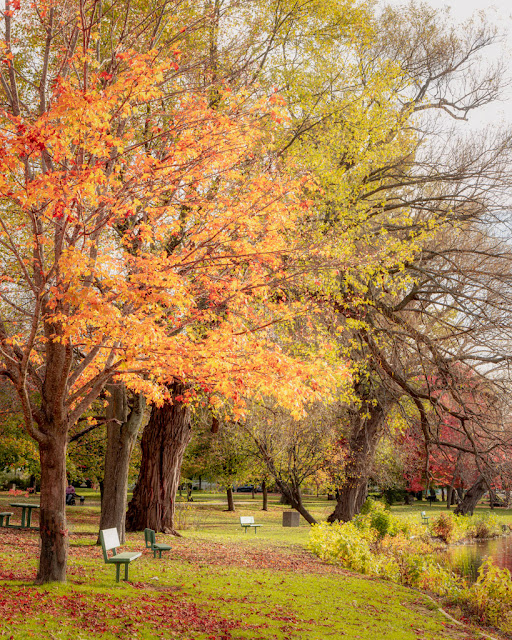 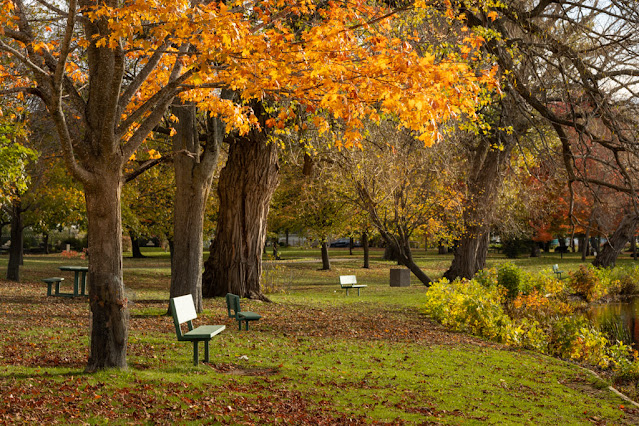 These two folk (below) bugged the heck out of me. I had my camera and tripod set up. They could have paused for a few seconds, or they could have at least apologized, but they walked by me without consideration or comment. They could also have chosen to walk on the other side of the trees, but no, they chose to walk into my photo.
They sauntered along and even sat on the bench for awhile. The guy looked back at me as if he were wondering if I had the audacity to take a photo of them. I sure did, ya turkey. Anyway, I think they improve the photo. (By the way, after waiting for a long time to get a clear photo, I see they are still the photo two up from here ↑↑. You might even see their heads in the distance if you squint.)
Anyway, here is the photo of them walking. If you compare the photos, I think you will agree that the photo that includes them is more interesting, so I guess I should thank them, even if they were inconsiderate boobs. 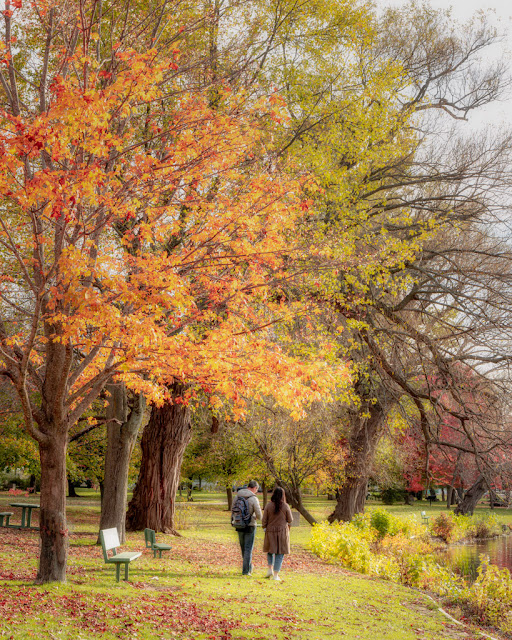 Later, I took photos looking across the river, and I think they may be better than these. I will leave them for another post.

Beautiful photos. You have some lovely places to wander & sit. The 3rd photo is particularly stunning, IMO.

I've read the articles & official provincial releases, about possible end to restrictions; there's a lot of "ifs" in the official release, ones that the press doesn't seem to be covering. Of course it's all playing to provincial elections next year.

I must admit that I like human interest, and the couple adds interest to the picture. On another note, I am glad that you had an attentive urologist when you needed help with your problem. There are male OB-GYNs, so why not female urologists? LOL.

I like the bench photos and the people. I think the trees look even more stunning with a grayish sky background. Good job, Ontario! I wish we had as many sane people here as you must there.

These are lovely and the humans add a very nice perspective,I think. Lighting is everything in the fall.

These are beautiful photos, but I do think the last one is the best, because of the two boobs. :-)

Boobs is the right word!
People can be so ignorant. I've never had anyone do that. And I don't really use a tripod much. People are usually so polite. They notice.

I usually try to avoid people in shots, but there are times it can't be helped.

The two people add to the shot. Nevertheless, they are inconsiderate boobs, and old enough to know better. I can remember each of my parents restraining my brothers or myself with a warning about walking in front of a person with a camera.

Stunning scenery! Love those photos. Maybe those people wanted to be in your photo. Or they are just trying to annoy you. You have the right to take and publish a photo of a public place.

They're starting to lift restrictions on Oahu too. I'm quite nervous. Our death rate jumped up today. I don't know what that means.