Focusing on the Sumac

We have a pharmacy just around the corner. When I went over to inquire about my new meds, I noticed that the little stand of trees and bushes was catching the light and looking pretty good.

So, I returned with my camera. The best of the light was gone, partially obscured by clouds, but it was still okay. The problem is that what looks good to the eye may not look good to the camera. I think it's because your eye focuses and roves here and there, but the camera sees it all in one take. If there's a lot of busyness in the frame, it doesn't tend to look so good to the camera.

I ended up focusing on smaller bits. Eventually, I was concentrating on just the sumac. If I had known that was going to be the case, I would have brought a different lens, but I made do.
I was attracted by the archlike curve in this ↓ photo. Again, a different lens might have smoothed out the background more, but I don't mind it too much. I am happy with the shape and the somewhat muted tones as well as the fall-off in the background. 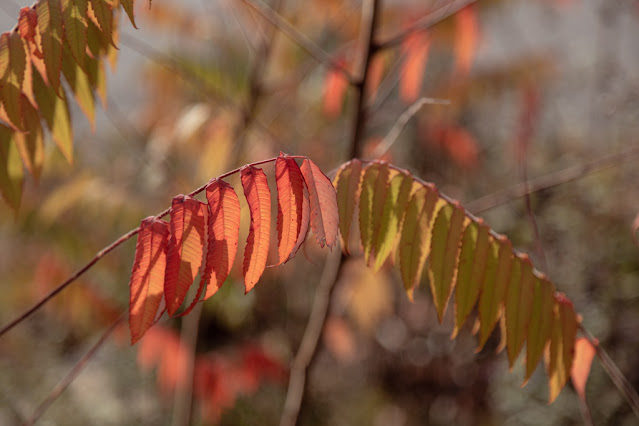 Next, I liked the light and the series of almost parallel branches behind the main one. 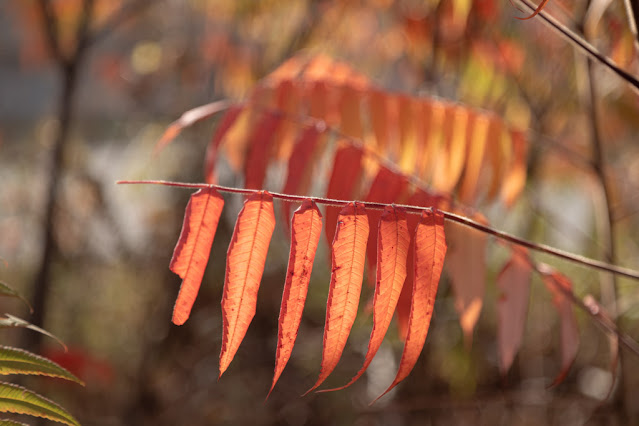 I turned the camera vertically and focused on the same branch. That mostly eliminated the somewhat distracting branches on the sides. I think that simplifying the photo by eliminating those side branches makes this the best photo of this short excursion. While I wish that the branch in the upper right weren't there, you can't work around everything. Outdoor photography doesn't take place in a studio where every element can be controlled. 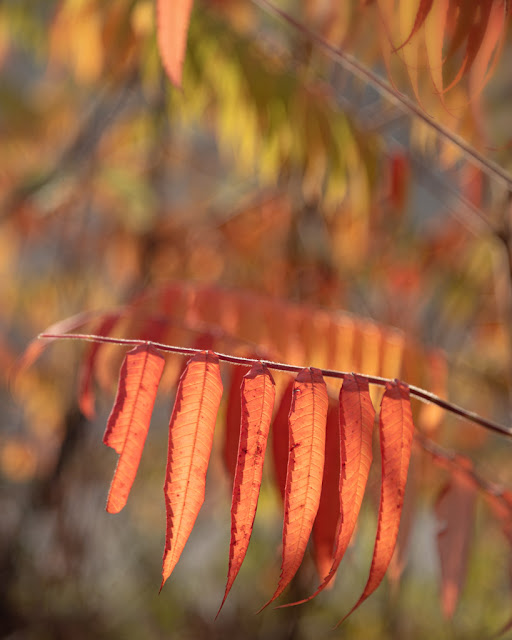 It might be worth another attempt with a different lens. We shall see.

I adore the sumac! Nicely captured. You make great points.

Sumacs attract our grouse, and robins, and the other birds who like the fruit.

I would definitely be drawn to those contrasting brilliant colors. And then you worked your magic and pared things down to become art.

I liked the second of the branches photo, even with the extraneous ones. I love the colors of fall and the busier the better. (although I know in photography that's not the case)

I've found the same thing in the past. Focusing in in on one piece, like your sumach, has been a good solution for me too.

Still some decent light left. I have color, but no light.

I do like the last one the best. But they are all pretty in their own way. :-)

Beautiful captures. You're right that what looks good to you might look different on camera. :-)