Some things don't jive. I think is can almost be categorized as cognitive dissonance although probably not precisely. If that doesn't fit, incongruity sure does.

As you already know we dined out for the first time, just last week. Then,  on Monday, we went back to exercise class for the very first time. I also read an article about how well the province is doing. But when I went to the grocery store I noticed a large sign at the entrance: Only one visit per week by only one person per family. Shauna informs me that it has been somewhere all along and that they must have just moved it. But it was so ominous and incongruous in light of developments. It is time for that sign to come down. No one is adhering to it in any case.

It doesn't make any sense to keep it on display. Things are loosening up a bit, and we all have our vax passports. Sue and I are onboard with caution and have been pretty much as careful as possible for a year and a half, but sheesh! it's time to take take baby steps back toward normality.

Following is some of the news in the article to which I referred, above.

Our local health unit is doing even better and is the best district in the whole province. Last I saw locally, we could add almost 10%  to the above rate of fully vaccinated. I am thinking that not too many places in the world can be doing very much better than our area.
I guess we are still in the fourth wave, but relatively speaking (and I emphasize relatively) it hasn't been that terrible: nothing like the third wave, for sure. The majority of the inflicted have not been fully vaxxed. Of new cases, the ratio of unvaxxed to vaxxed is ~6x, and the disparity in ICU cases and deaths is greater. Also bear in mind that there are many more vaxxed than unvaxxed people, which means, at least to me, that an unvaxxed person is even more than 6x more likely to catch the virus.
Let me tell you about our first pandemic exercise class for a moment. It was so good to get back to our Gentle Fit for Seniors group. It was well attended, but, unfortunately, we were obliged to wear masks throughout. It is no longer a provincial requirement, but it is a condition imposed by the church whose facilities we are using. This shouldn't be necessary once we are at our designated spots. Ah well! it was still very very good to get out.
To commemorate the occasion, I took a selfie  as folk were signing in and milling about. Sue is way in the background with a light sweater and dark mask. 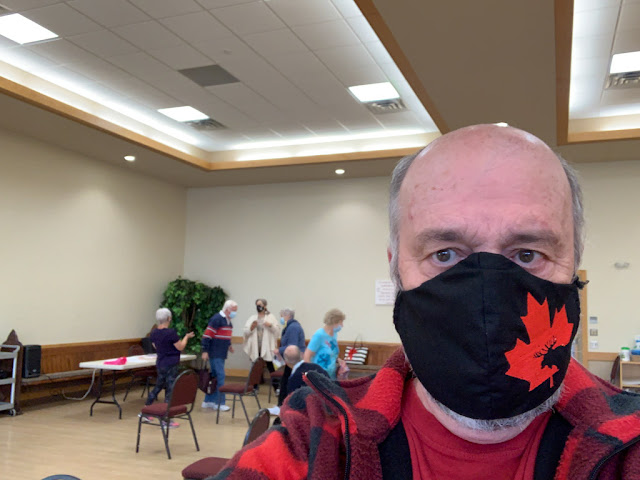 I had to break into laughter at one point. There are always one or two in the crowd who will go left when everyone else is going right, and I have to admit that does mess with social distancing. Seniors, eh! What fun!
Posted by Anvilcloud at 4:36 am

Our naturalists club meets in a church hall and we have not yet been able to come to a satisfactory arrangement to resume in person meetings. Ironically, I gave my first in person presentation since COVID recently - in a retirement centre!

I like your mask in the photo. Exercising indoors with a group & no masks, I did not think the province had lifted that rule as yet. Thankfully the church & you seniors are wiser than that.

I missed a day of my chair yoga, and then the teacher was on vacation the next week, so someone brought some simple chair exercise videos. I could not do the ones which left me out of breath, sort of aerobic though still sitting! Wow! Glad you all are trying out your familiar group. After a while there will be less people each week probably.

As I only shop for a few items at a time, ie what I can carry with me, that once a week rule would have never worked for me.

Weekly wouldn't work for us! JB uses shopping as therapy and can only carry so much.
Good for you for getting back to it!

Here we are at 90 percent vaccinated. I still don't do crowds of anything yet.

Agreed. But the store probably got a reprimand for not displaying the sign where whomever was inspecting thought it should be. Minor despots on the loose.
Our aquafit is back. The way it is set up, showering in a mask is mandated, sort of. We do not have to wear the masks into the pool, thank goodness.
Tell Sue I like her sweater.

My county has more cases and deaths than your province! Over 500 cases and usually 3-6 deaths per week. The deceased are young these days, most of them younger than I am. I love your mask and think that most venues don't want to be held liable (either morally or financially) for someone catching Covid while on their premises. Glad that you're getting back to normal-ish!

We are no where near that vaccine rate you have there. It's disappointing and frustrating.

You Canadians must be an older crowd. I'm pretty sure I heard a report just yesterday that 20% of Americans are not eligible for the vaccine yet. It made me optimistic that we might get up to 80% or more when they become eligible.

You are doing well--as an individual and as a country. Where I live is full of vax deniers so I continue to mask and avoid public places. Just met with a book club via Zoom.

Thank you for visiting my blog and heads up on the photos not showing. Tried to fix it.
enjoy the exercise class!

So many groups I attended have disbanded and not reformed. It's sad.

It is simply awesome that you and Sue have joined an exercise class. Keep going!!!

Maybe the grcery stores may be trying to limit due to low supplies.

I exercise at home. All that huffing and puffing...even with a mask makes me nervous. This pandemic is with us for a year or two more. YOu are correct about that stupid unenforceable sign at the grocery. They should come with some pleading caution or a list of the weekly COVID stats.

Your vaccine rates are impressive. Here, we have just crossed the 50% line. People are so resistant to the idea. I will never understand it. My sister is a nurse, for God's sake, and firmly believes that it changes your DNA. I asked her one question: "Okay. Think about it. Where is your DNA located?" She got very angry and told me she was entitled to her opinion. I stopped talking because she is my sister, the only family I've got left, but what I choked back was "When something is based on an untrue premise, it's NOT an opinion. It is a delusion."

Wow! Your province is doing a LOT LOT better than we are in our state. You're so lucky.