Tree in the Fog

Early in the morning, before Sue and I went on our third autumn drive, Bob and I had gone out in the dark. He had a goal in mind – to photograph in the fog – and invited me to tag along.

The location that he had in mind was not to his liking. He was hoping for fog over a stream. Alas, there wasn't any. We then moved onto another spot by a larger river. We were foiled once again.

With great determination, Bob drove on, and we discovered a lot of fog in the more elevated areas, which is not something that one expects.

We spotted a tree in the distance and stopped for photos. I took two, one using the fence as foreground and one of just the isolated tree in the distance. With the sun just about to rise, there was an interesting hue that I don't think I captured perfectly, but I tried. 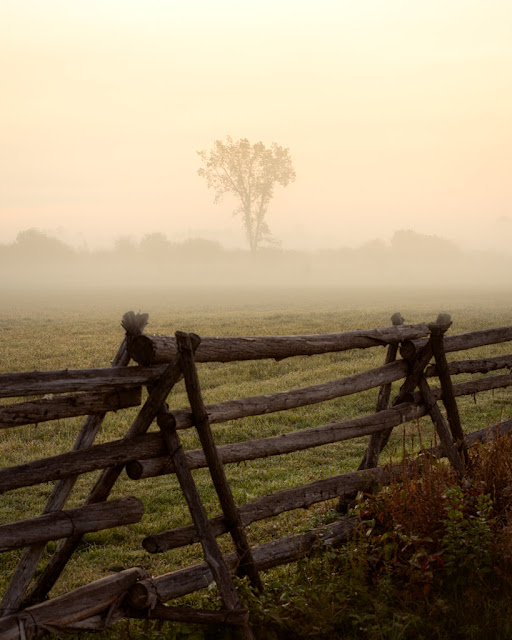 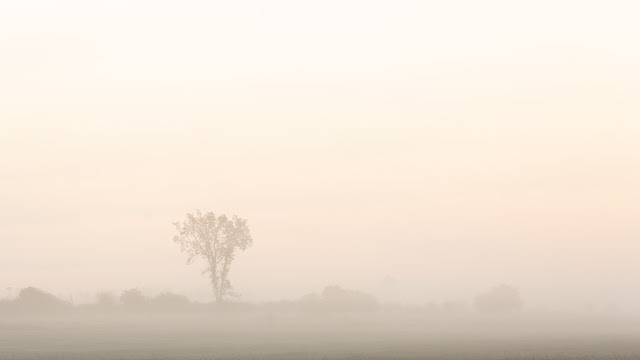 The first photo of the two above is a composite. I took one with the fence as you see it in that photo, but that left the tree to appear very small. So, from the same spot, I zoomed in on the tree and then composited the two images together in post.

Bob had pretty much finished with shooting the scene while I had been faffing about with changing from my normal lens to my 70-200 and also getting my internally foggy brain into gear. He used the time to photograph moi in my warm red-black jacket, for it was still a tad chilly in the great outdoors. 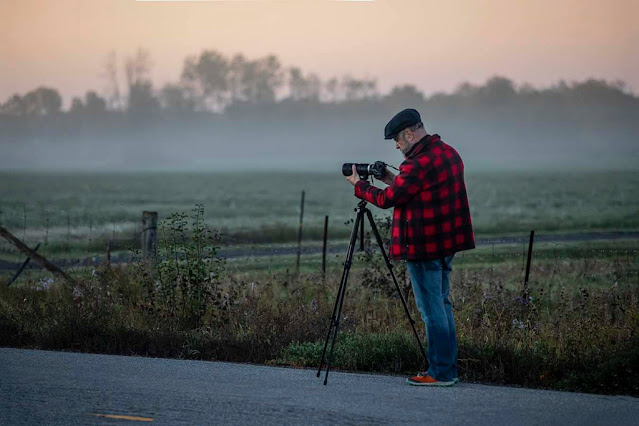 From there, we moved onto another location, which I will post about later.
Posted by Anvilcloud at 7:03 am

That dawn rosy light is great...and I do love the fence and tree shot!

These are great!! I love fog but am barely in the right place at the right time.

I love fog photos! They turned out very well.

Beautiful light! You did so well!

Greeat idea. I like the one with the fence.

I really like that first photo. Very ethereal and mysterious. :-)

You forgot to mention the red shoes that go with your warm red jacket!

I liked both those foggy photos.

Warm air rises. Though the lake and river had cleared off, fog was still on the higher ground.

That first one is a perfect capture. :)

That first one is fantastic. I still hope to get some foggy cows one day.

That lovely pink!
I see it more often in the early evenings. Quite something.
-Kate

You did well, with determined Bob!