Looking Across the River

I bit the bullet yesterday and turned on the furnace. I could have lasted longer, but with Sha and the kids coming over for dinner that night, I figured that I may as well do it now, for it would have to go on soon regardless. We keep the house on what many would consider the frosty side. We set the thermostat at 20C/68F during the day and 15C/59F for sleeping. The house doesn't always cool all of the way down to 15C, however.

Speaking of heating and cooling, shall we move onto what could be the final two fall photos as our hemisphere cools down? They may not be the last, but they are the last ones that I have on hand at the moment.

After wandering about in the park in yesterday's post, I looked across the river and saw two trees that stood out – one orange and one yellow. As I mentioned yesterday, I wasn't getting the best light, but I stood there for awhile taking photo after photo when conditions would brighten just a little. When I got home, I saw that I had taken 17 shots of these two trees, but I've trashed 15 keeping only the two below. Even for these two, the conditions were not optimal, but post processing helped me to brighten them a bit, as if the sun had been stronger.

Here are the two images that I kept. I took them from almost the same spot although I did shift very slightly. I have also cropped them differently. I think I like the closer crop best, it is almost 4x5 (8x10). The second one is the ratio that comes out of the camera which 3x2 (4x6), so I guess I didn't really crop it at all. I can crop in camera, but I never do. Oddly enough, the pre-set cropping ratios in the camera do not include the universally popular 4x5. I can do 4x3, 5x7 or 16x9, which is your monitor's ratio. 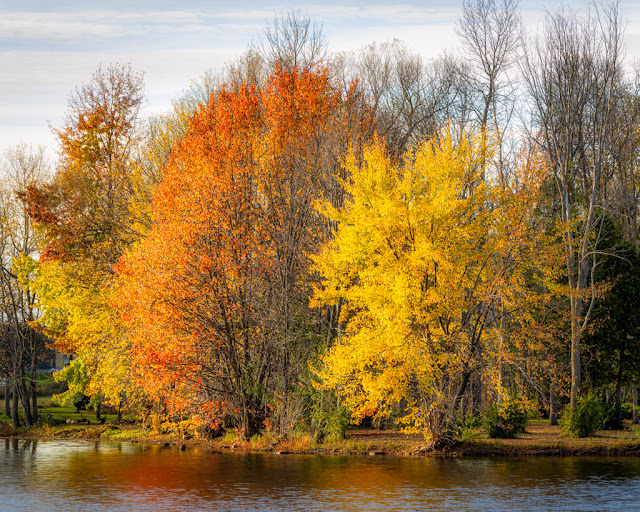 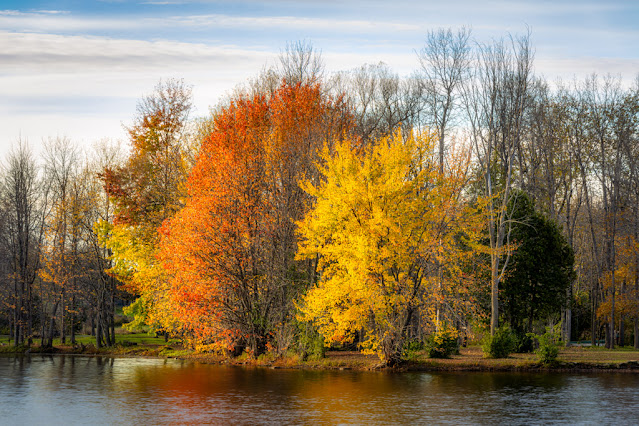 I think those were the best of that little excursion. I do like them better that the photos that I showed yesterday although the two boobs photo was a bit of a hit.

I like the second one because it shows how these two trees are the last ones to hold their leaves.

I really prefer the second also. I like the trees reflections, both the ones centered with color, and those stark poles reflected over on our left. I didn't remember any boobs (in the US that refers to women's breasts)...and had to look back at yesterday's photos for you. Ah, the interfering couple, which I kind of enjoyed, except for your wish that they not appear in the picture!

@Barbara. No, no. I was happy with the photo, but I wasn't happy about their callous intrusion in the first place.

I also prefer the second one by a little. I like the way the two colorful trees stand out from the others and think that more water in front adds a certain je ne sais quoi. I didn't realize that taking the picture is only the first step in the process. It's interesting to learn about the various techniques.

The yellow in the last picture is breath taking.

Nice of the wo trees to pose right beside each other.

I like them both. You are inspiring me to think more carefully about my photography.

You do such great work.
We keep it at 20 in the day and 16 at night. JB is ALWAYS cold. Well, except when he has hot flashes after his treatments!!!

These are beautiful. And the two boobs shot was excellent though it would have been thoughtful for one of them to have worn a brighter jacket. I loved your shots of sumac--I try every year to capture it and have yet to be satisfied. As for your new urologist whos was able to put her finger on the problem . ..(exit giggling.)

I like them both, but the first one is my favorite. :-)

I would choose the second because the slight showing of the blue sky just added a bit more interest for me. That said, your colors were quite spectacular compared to those we didn’t see locally this season. Alas, this weeks nor’easter will have certainly ended any hopes of finding good colors.

I guess the second one shows the contrast more so I kinda like that one better too, but they're both beautiful fall versions.