Our third drive was by far the longest and the one with by far the fewest photos. In point of fact, I only took three photos (not counting the phone pano), and I choose not to share one because ... well ... because that's life and some shots don't thrill me.

Here's a map of the drive courtesy of Google Maps. We took the blue route to mount Saint Patrick and the outer of the two gray routes home. 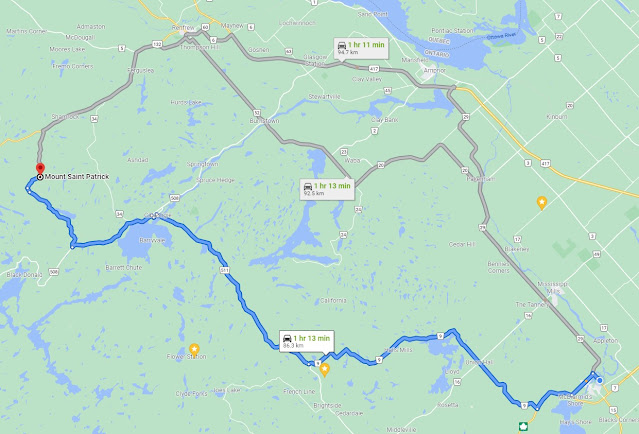 The blue route was a fab drive but the kind you enjoy as the landscape rolls by for there were no good places to stop although the highlands of the region are very scenic
We stopped at Calabogie for a quick picnic lunch, and, mercifully, found a washroom. I used the phone to take a pano of Calabogie Lake on the Madawaska River from our picnic spot.

It wasn't until we were almost at Mount Saint Patrick that I stopped to take these autumnal photos. They are from the same spot, one horizontal and one vertical. 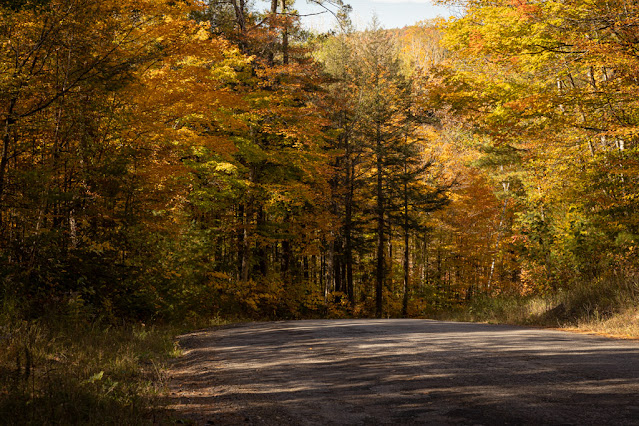 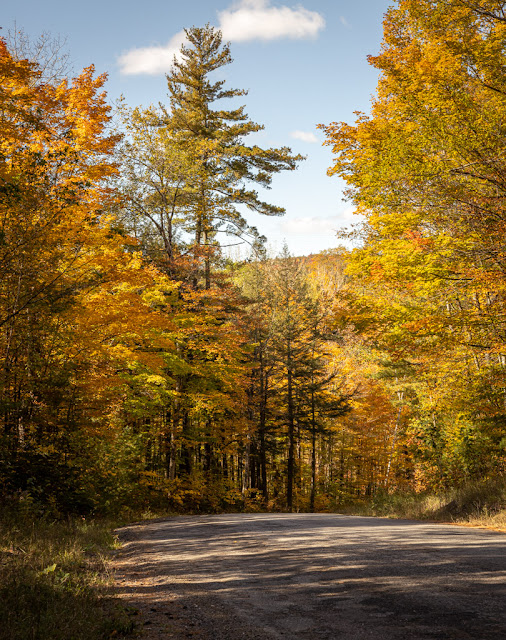 After Mount Saint Patrick, we headed to Renfrew. The scenery wasn't great and the traffic started to become painful, particularly after Renfrew on the way home. It would have been better to have turned around at Mount Saint Patrick and returned home the way that we came.
It's Thanksgiving weekend. There are things to do, so who knows when we will be able to make our next autumn excursion. However, if that is to be it for this fall season, we have both seen and photographed some fine colour.

Posted by Anvilcloud at 5:57 am

Great drive into beautiful countryside...glad you could capture some pretty colors.

Happy Thanksgiving, AC. That was a lovely excursion. You traffic is a bit worse than ours.

I'm thinking we might head down that way this afternoon. The last time we headed up the road at the Mountain, we met a wagon load of Mennonites (four generations!) out for a drive. That poor horse hauling all those people up the Mountain.

Autumn drives with clear skies and lots of color are the best.

Happy Thanksgiving weekend! The horizontal shot feels more open and the vertical shot more closed. That said, I like them both!

Yes, you have. Happy Thanksgiving too.

They are so far along already! Hope you have a good Thanksgiving.

Wow! I love seeing your gorgeous fall colors. You really drove far! We haven't gone farther than the grocery store in ages.

It was a lovely drive.

Perfect colors and in time for Thanksgiving weekend, sending good wishes to you and your family.

The colours around here are just about at their peak, and the warm, sunny weather we have had of late gives them a very splendid look.