Thursday was not nearly as nice as Wednesday with the bright blue skies having been overcome by gray clouds that resulted in those banal skies that are unloved by photographers. The fall colours were still good, but they were just a little bit on the dull side compared to the previous day. However, a little work in post helped to lift the light just enough..

Under the circumstances, I tried to avoid getting sky in the photos as much as possible, but it wasn't always completely possible. There was some sky directly over the middle of this .photo. It wasn't much, but it bothered me enough that I filled it in. 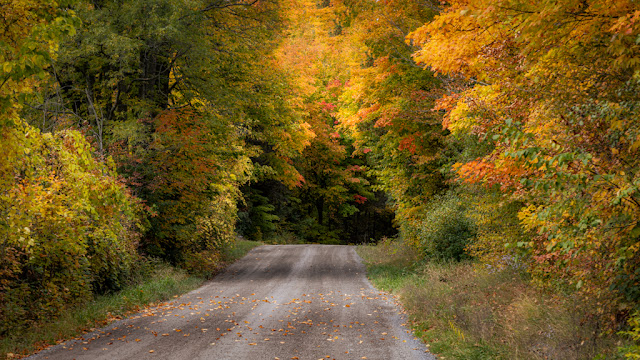 I don't necessarily go looking for road photos. In point of fact, I would just as soon avoid them because I've photographed so many, but a guy has to take what nature offers. Yesterday, nature offered mostly road photos, and that is all that I am going to show you today although I did take others as well.

The above tunnel effect is one style of road photo. A curve is another. While it would be nice to see around the bend in the next photo, it is okay the way that it is. There was a bit more sky that I filled-in in this one. 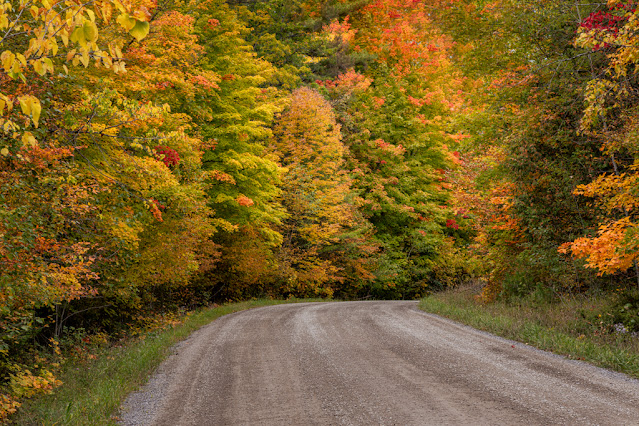 The final photo is my fave of the day. I like the long leading line with the way being completely arched over by trees. I also like how we can see light beyond the arch unlike the first photo which stops in darkness for a bend in the road. There were just a few little points of sky to eliminate in this photo, and I really like how it turned out, even though it doesn't have quite as much colour as the preceding photo. 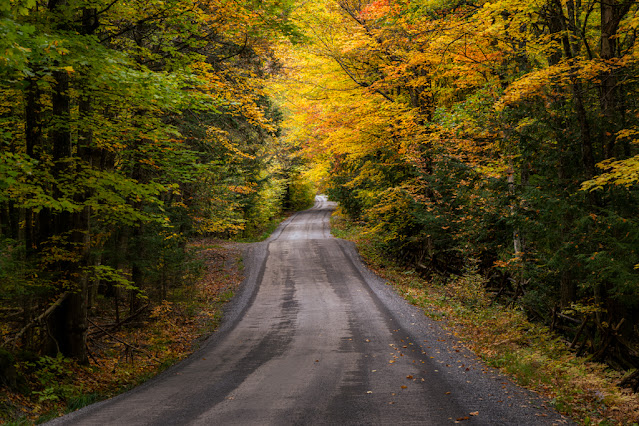 These were all from a two hour circuit fairly near home, and that's with lots of stops for hopping out of the car to press the shutter. I don't think I'd like to travel much farther under dull skies, but maybe we'll get some more bright days before too many leaves drop.

Posted by Anvilcloud at 5:19 am

An absolutely gorgeous drive - your photos are definitely needed for a local calendar fund raiser.

Hopefully, out colors will be soon turning into such a wonderful palette making local excursions as colorful too. Your fall colors are way ahead of our own and while a bit envious, I know our time will come to enjoy soon enough.

I always enjoy road photos in autumn. These are great!

Lovely. Not sure about my favourite, as they are all good in their own way. But the third one is the more complete of them I feel.

Excellent work...and I don't know about taking out sky. But since it's already gone, I won't miss it! The third is my fav also, the light at the end of the curve is definitely promising.

The skies might have been dull, but the shots are gorgeous nevertheless.

Yes, spectacular to number 3. I hope you are out today. Even our yard is highly coloured and shining.

Gorgeous leaf color! We don't regularly have great leaf color here as the transition can be quite abrupt and we frequently get lots of fall rain or an early snow to remove the leaves quickly.

I can't decide which one I love most. They all make me feel peaceful! Beautiful colors.

They are really rich. Thank you.

Very nice. Reminds me of some of the roads where I've tried similar pictures.

My kind of fall photography.

You say it wasn't as nice but the photos seem more vibrant! Lovely! :)

OMG! This is just awesome! I had to call Art over to look at your photos.