Fog on the Farm, Part I

After photographing the tree in the fog, we drove onto another road where we saw something that was worth stopping for. I can't remember just what it was now, for after we parked by a farm driveway, the farmer came by on his tractor and invited is to walk into his property. He told us where we could park the car off the road and then we could just head on in. And that is what we did.

While Bob was parking the car, I began the trek, gimping along with my stupid right foot sans cane. Sometimes, ya gotta do what ya gotta do, and that is what I went and dun.

Bob got this photo, which I love, of me beginning my trek, but he was soon ahead of me. 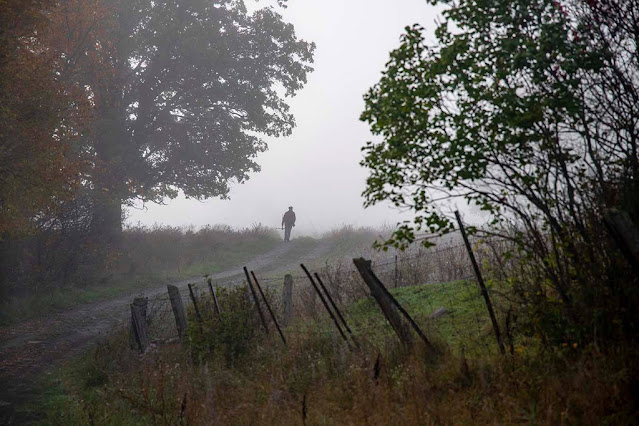 As you can plainly see, it was very foggy, but I took a few photos of  the subtle colour that I could see off to my left  The sun was barely up but was giving enough light for a photo or two. 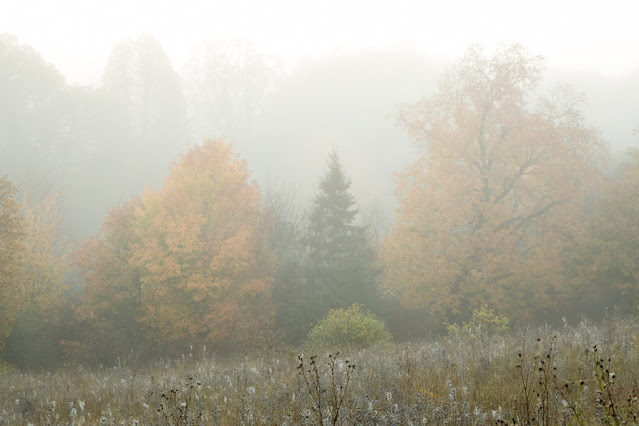 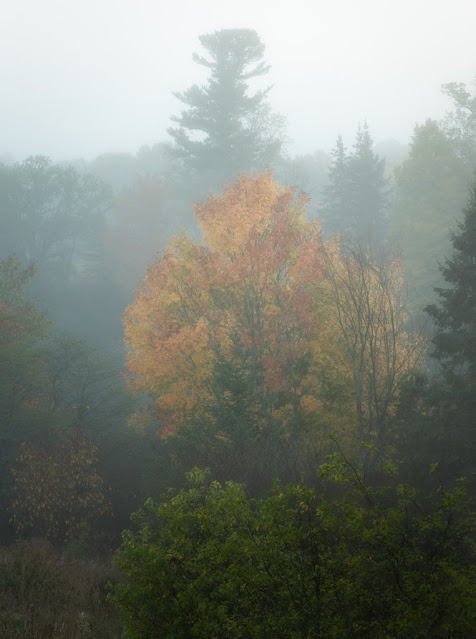 I could kick myself for not concentrating on the tree to right in the first photo, above, because I see now that it had an interesting shape along with the noticeable branches. Why didn't I see that at the time?
Bob had disappeared by now, but I caught up to him at a split rail fence, which is where we halted. As in yesterday's tree in the fog post, there was a nice colour in the atmosphere. The fog was thick enough to allow me to get the sun in the photo. 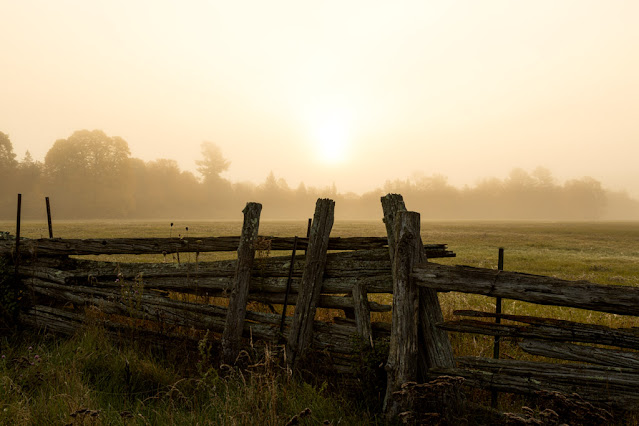 Another fence and  sun photo from farther back with the sun hanging on the edge of a tree. 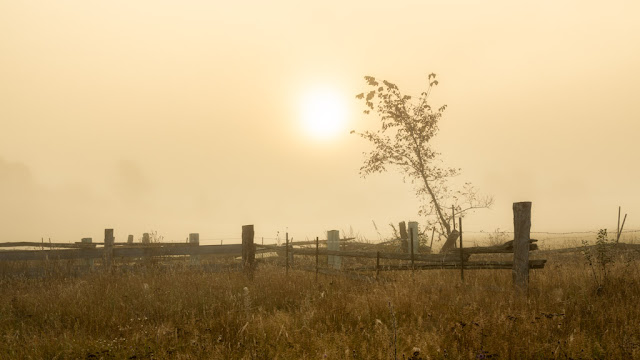 Both of the fence photos involved taking two photos, one to lighten the darker fence and another  to darken the brighter sky.
There were more photos, but I think I shall leave them for one final, foggy morning post.

Posted by Anvilcloud at 6:03 am

How kind of the farmer to allow you to walk in his fields. Your photos are stunning; I particularly like the 2nd photo & Bob's photo of you beginning the walk. Happy Thanksgiving.

Oh yes, go back again and see what that tree with the crooked trunk looks like...if you can. Love that rail fence, surprised at details with bright sun, but your darkening that part of the pic must have worked well.

The fog lends a special element, of course, to any photo and the split rail fence and the photo of the colorful tree preceding it were my favorite in this foggy outing.

I love the fence photos in the fog and you walking. The light and fog add mystery to the scene.

Too bad about your gimpy foot. That was indeed a nice shot of you walking ahead. So much fog, wow!!!

The fog does bring the right touch to things.

Fog is rather peaceful.

Great pictures of the fog! I like the two fence photos best.

I hope you start carrying your cane. You can buy one, cheap, at the drug store that has a wrist loop, so the worst of taking pictures will be the cane banging your shins.

Fog makes everything look so mysterious and unearthly.