Halloween has arrived. It is a big deal to many but not so much to us. However, we always participated in the giving of treats in our former city and continued with enthusiasm when we first arrived here. But we were soon jaded.
Permit me to explain.
Here, we were inundated with scores of kids. There must have been hundreds. We live in townhouses, so people from outlying areas would drop their kids on our block, so they could make a quick and big haul.
We were disenchanted, for it seemed to us that the event should have been, at least partly, a neighbourhood festivity in which we could interact with people that we knew. While we never minded some strangers at the door, we just didn't appreciate 200 of them.
Then, along came Danica into this world, followed by Jonathan, and we would hand out treats at their house while the parents took the kids around. That was fun to do. I'd take pictures of the kids before they went trekking, and we didn't mind handing out treats to the fewer number that came calling in that neighbourhood.
Now, we are no longer needed in that role, but we have no interest in plying the local hordes with treats. So, we don't. We close up, turn the front lights out, and head to the back of the house.
Call us killjoys if you wish, but that really isn't it. Maybe it was simply much too much of a good thing.
Now then, I do have two photos. Of course, I do. There is a house with a gigantic skeleton just around the corner. They don't have it lit all that long in the evening, but I eventually arrived when it was lit.
It's challenging to photograph such a dynamic range. I took several exposures and blended the light and dark together in post to produce single, representative images. 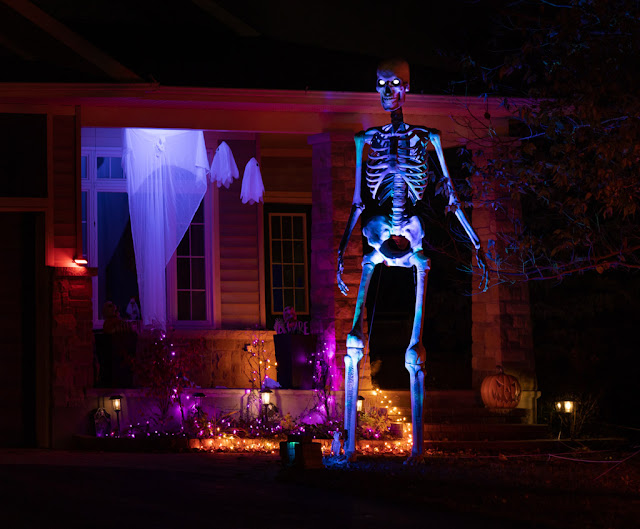 Have a good Halloween however you do or don't celebrate the occasion.
Posted by Anvilcloud at 7:00 am

Our grandkids are so excited. The four year old isn’t afraid this year and has received training from his sisters about the etiquette of trick or treating. When we first moved here, 300 kids from surrounding areas invaded the neighbourhood. Not so much now. We didn’t participate in the treating last year because of Covid. We are back this year and waiting for the grandkids to visit.

Our grandchildren have grown and we no longer head up to their neighborhood to help. No one ever comes to our house for Halloween. I agree with you that is should be a neighborhood activity that includes a bit of socializing. Just giving out candy to hords is not my cup of tea.

Technical challenge met and exceeded!
We get no one where we live - baby deer do not T or T. We put candy in the mailboxes of families with kids on our road. With our name on, so they know it is safe candy.
This year I have one small, cute pumpkins.
I think you are right to duck. Our kids and grandkids were only sent to their own neighbourhood or, in the case of the grandkids, to one friend's neighbourhood if they chose - a lot of their friends were bussed in to the French Language school they all attended.

Nobody comes in our apartment complex. Most of the children in the area head to one street in town which has many houses participating in treat giving (as well as huge decorations.) I hope some civic organizations help they with all the treats. It is fun to see the little ones enjoying themselves, and I have gone to take their pics a few times. I Love your photo of the skeleton and other decorations...well done!!

We haven't had any trick or treaters in years. I did buy a couple of full size candy bars, just in case. When we lived on army bases we would get the hoards!

similar here though for a different reason. Our neighborhood has aged drastically and there are no longer any kids here. I miss them.....Ray

It got like that in my development too--most of the neighborhood kids grew up and left; it was mostly drop offs and some of them were quite surly. However, now we're back to tons of little kids in the neighborhood although some parents don't bring them door to door.

In our apartment complex, I turn on my light and hope for some little ones. In 13 years, I've had maybe a dozen. Now I just give the stray T&T kid a Kind Bar, which I keep around for myself. :-)

My apartment building doesn't participate as you'd expect. So I don't really deal with it.

We're killjoys too this year, but that really is some skeleton!

These days we get very few kids at the door. It's not worth spending a whole evening waiting for 20 kids.

Well done on the giant skeleton!

We've never gotten any kids here in this complex. I've gone years past and handed out candy at McFamly's house while they took the boys around. They haven't gone out and about since covid, though.
Never seen a skeleton that large! LOL!

My son Everett has been in his own house for two years and although he stocks up on treats and puts his porch lights on, front and back, no kids come. I told him he might have to up his game and actually do some kind of Halloween decorating outside. -Kate

We had just a sprinkling of kids maybe a decade ago, but for the last few years there haven't been any kids trick or treating here. However, relatives and friends tell me that in their neighborhood, they had quite a few. We hate to be party poopers, but we just turn off our lights for Halloween.