Our Fifth Autumn Drive: A First and a Last

No one has guessed our destination mentioned in yesterday's post. Mind you, I am not sure if any old-timers have read it. In fact, where have all the old-timers gone? I hope it is not to graveyards everyone.

Here it is. The sign says it all, or at least enough that I don't have to launch into a dissertation. 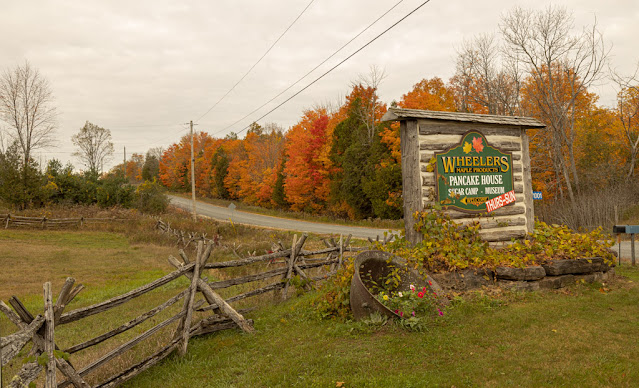 This is the First of the title: our first dining-in experience since the pandemic started and our first trip to Wheelers in two years. In many normal years, we tend to make the trip twice but almost always once.
It's a lovely spot buried in the nether regions of the district about a 45' drive from home. Wheelers is about a kilometer off what is already a backroad. This is a sample of what the drive in from the road to the restaurant looked like. 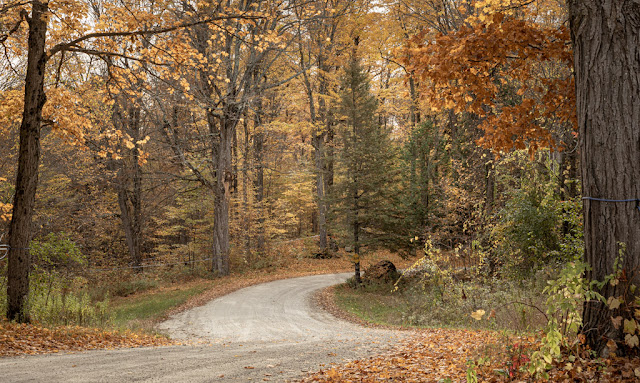 It was an overcast day, and I tried to capture that and avoid the temptation to gild the autumn lily, as it were. I want to give an accurate picture as possible.
The next photo is farther along the lane in to the dining room with the roof of the restaurant beginning to appear in the distance. 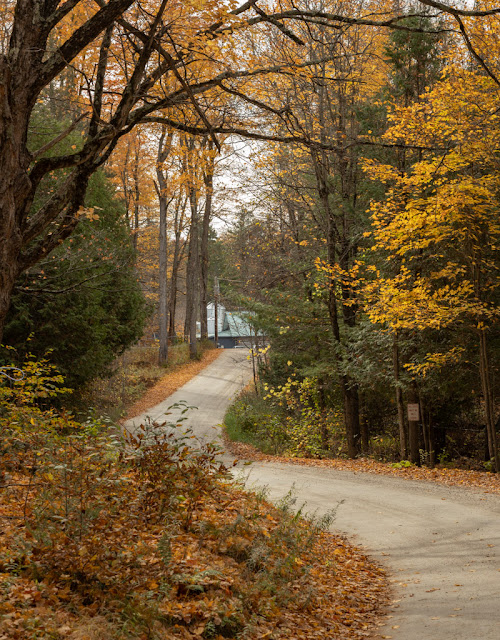 We had reserved a table for two at 10am, and we timed it well by only being a few minutes early. We checked in by showing our health passes and driver's licenses. We wore our masks to the table, only removing them when seated. 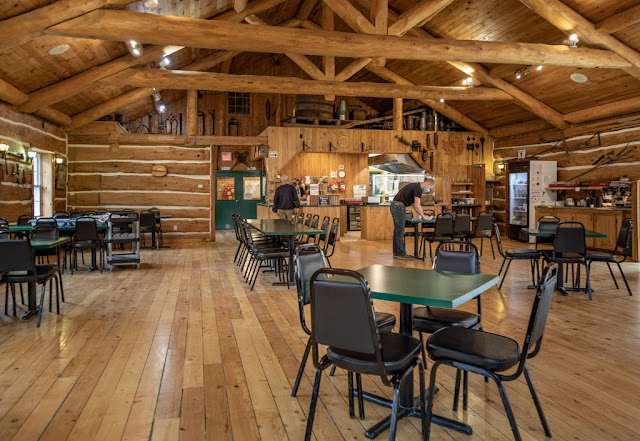 You can perhaps see why we felt like this was a good place to choose as our first dine-inside experience in a year and a half and more. I am not just referring to the emptiness but also he spaciousness with the high roof and lots of floor-level elbow room. There were three or four tables occupied, but I did them the courtesy of not including them in this photo. In normal times, the tables-for-four that you see are often large tables, and the room might very well be full.
Oddly enough, we were shown to a table by the window, which is the one that we often chose anyway, when folk could just walk in without a reservation. This was the view over Sue's fine head, followed by Sue's fine head itself in both masked and unmasked versions of the lady. That is a portion of the sugar bush that you see. It was dull and there had been very much leaf fall. I am thinking that the sugar maples change colour and drop their leaves early. 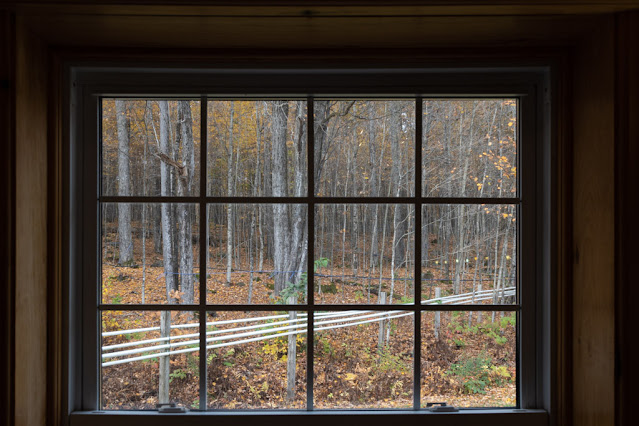 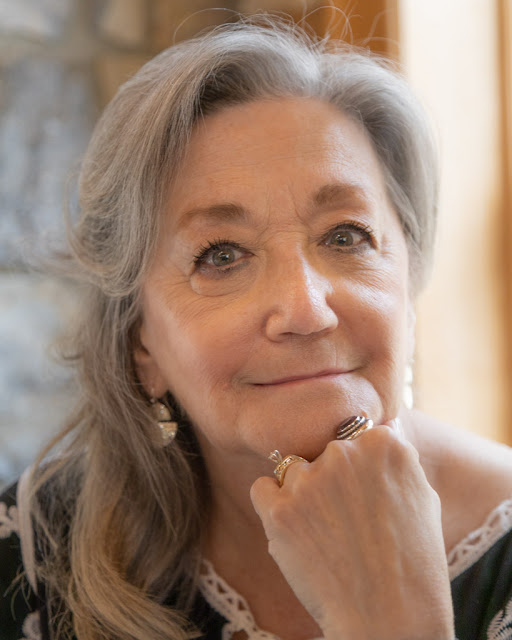 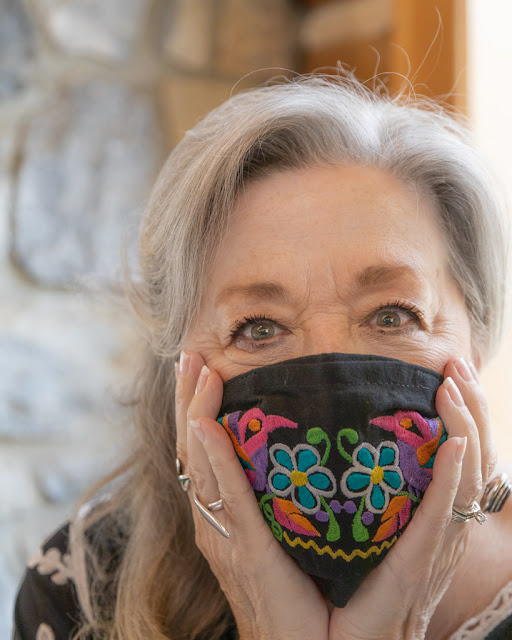 Feeling left out, I passed the camera over to Sue. She was able to include the ancient sugar shack through the window. 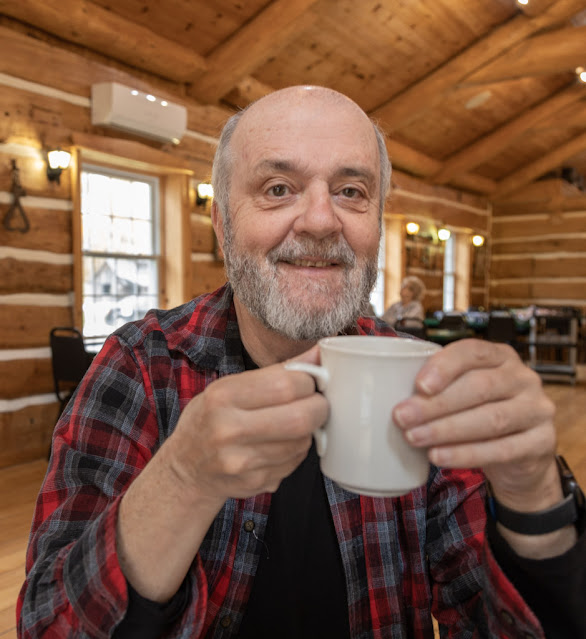 It was a typical s maple syrup camp breakfast. Pancake, sausages and French toast are really all that they serve, whatever the time of day or year, and in normal years, the only day that they close is Christmas Day. 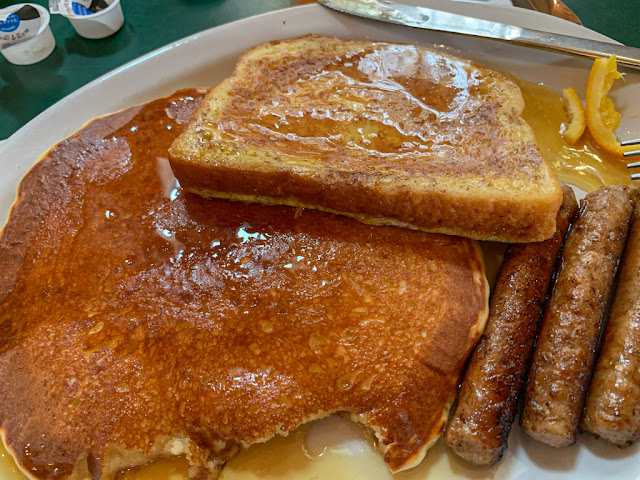 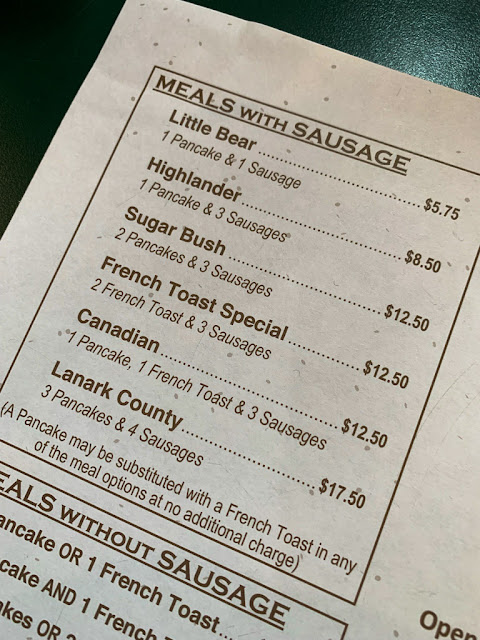 After exiting the dining room on a maple syrup, sugar high, I took a few photos, just for the record, for as I have mentioned the conditions weren't good. The trees of Eastern Ontario are generally vivid with lots of reds and oranges, but the maple sugar trees turn yellow. The fairly bare branches reveal that the trees have lost a lots of their leaves, which the leaf carpet below emphasizes. 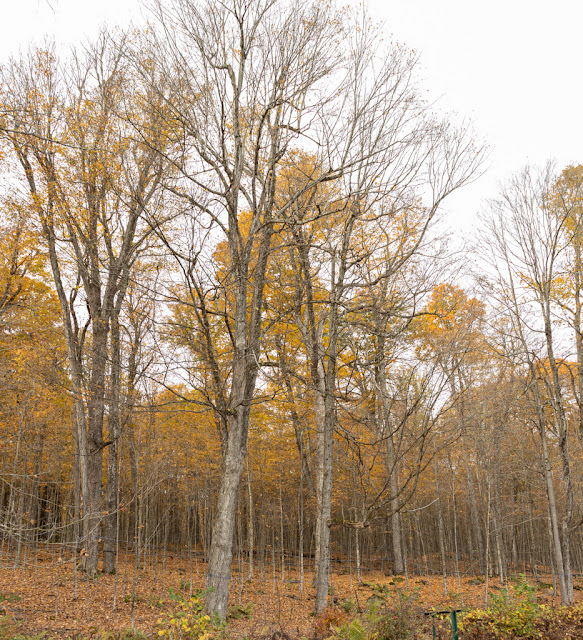 There is more bush on the background past where Sue is communing with the alpacas. In other years we have walked the trails back there, but there didn't seem to be much point this time, give both the overcast condition and the significant leaf fall. 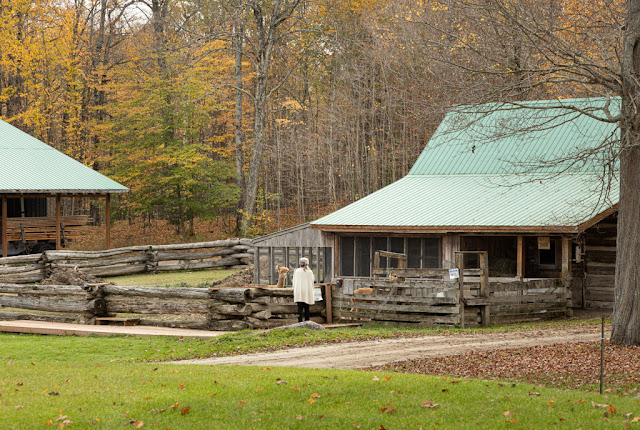 Despite being past peak colour the drives there and back home were still quite lovely, but I have no photos from the trip. There were spots where I could have stopped, but I figure that I've done enough for this autumn. The only thing I might still do is shoot a little bit in town, but only if the spirit moves and the conditions make it worthwhile.
And that was the Last of the title: the last autumn roadtrip for 2021.
Posted by Anvilcloud at 7:36 am

Well worth the trip. It must have quite a reputation that brings people to such an out of way place. I'm sure they make money on maple syrup sales too. If eve we get your way we'll have to make a point of visiting that restaurant.

These were lovely photos...especially a great one of you and Sue...looking very happy and calm, both of you. Calm in that you aren't trying to look any particular way...just being. Of course some maple syrup strewn liberally around pancakes or French Toast and sausages can do that, as well as coffee, I imagine. I also was really happy with the bend in the road going through the trees.

That was such a nice journey through the woods to get to the restaurant. The breakfast was enough to feed three people. It looked delicious. Sue looked gorgeous and you looked fine, too. I noticed that she wore a number of rings, but you wore none. Haha.

Such a nice place to eat, and your photos were great. The place I am now getting my haircuts is a remodeled livery stable that strongly resembles your restaurant with very high ceilings and the seating widely spaced. Airy and sparsely populated. If only I could get sausages and pancakes there :-)

It looks like just the right place to make that first venture into inside. I am glad I'm not hungry right now or I might have drooled over those pictures. :-)

The colors of autumn and the some foods as well, what a great combination. It was also nice to see you and Sue looking relaxed and happy to be out and about.

That looks like our kinda place to go, not that we're going places anyway.

A lovely place and my kinda food.

These are beautiful autumn photos. Love the breakfast photos too. I miss breakfasts out!

Past peak color? Your season is well ahead of ours. Gives me a glimpse of what we've got to look forward to.