It is just two weeks ago today that I posted Volunteers in the Garden. If anything, those wild petunias are growling even more prolific in the soil-less mulch, even after the long and hot dry spell, which we have recently endured.
I was moved to photograph them again, this time with my camera and not the phone. Once again, I just leaned out the second floor window and looked down. 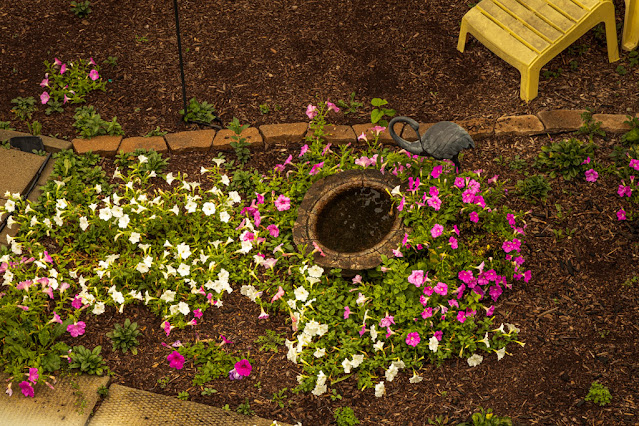 You can barely distinguish between the volunteers and the planted pot, which is just to the right of the bird bath, on this side of the heron.
That ↑ was as close as I could get with my normal lens zoomed out to 105mm. Later, I put the longer lens on and zoomed it to its ↓ maximum 200mm. 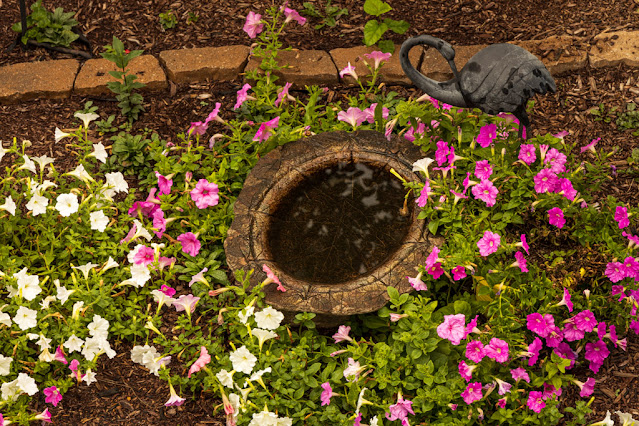 I do have an even longer lens, but I think this was close enough. In point of fact, I think the first photo was the better one as it showed more, although still not all, of these valiant flowers.
I took one more photo, just shifting slightly from the one above. 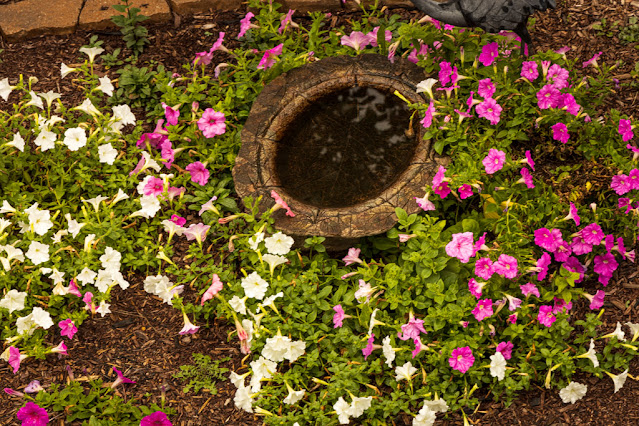 We can't  seem to stop marvelling at these wild petunias. Hopefully, they will continue to thrive for another month as autumn begins to approach.
Posted by Anvilcloud at 6:20 am

I’ve never heard of wild petunias before. Save some seeds. There could be a market for them.

I love petunias because of their hardiness. And beauty, of course. Now I will love them for their persistence.

I wonder if deer eat them. I like planting stuff that are hardy and thrive but dislike the act of planting feed for the local deer population.

Those are incredible, to say the least! The seeds of petunias are so small, they must just seed themselves...I've never planted them from seed, always buying the little plants from nurseries. So kudos to you for those hardy guys. And leaning out the window with huge lenses is a bit wild for yourself!

The deer are cleaning my petunias out.

I hope they thrive, too. They look fabulous! :)

It looks deliberate and they are beautiful ground cover. Petunias are very hardy and love hot weather. I usually grow them in the front of my house where they get full afternoon sun.

What a lovely and colourful display. One day I will have that. I hope...

My flowers are starting to fade!

Good grief! You have wild petunias? That is really awesome. I love the splash of color they give to the garden.