The hinges to you-know-where are almost white hot these days. With feel-like temperatures of 40C/100F, we are keeping our noses inside as much as we can. Friday night was a tough one for me. I just couldn't settle conformably for very long and gave it up at 4:30 early Saturday morning.

After coffee and puter puttering, I headed out for more of my lights in the night photos. It was hot enough even in the wee hours, but it was bearable.

The destination that I had in mind this time was the nearest gas station. The refilling truck came by while I was there but didn't disturb my process too much. I do wish that other car hadn't been there (to the right), but I guess the night-employees have to have somewhere to park. 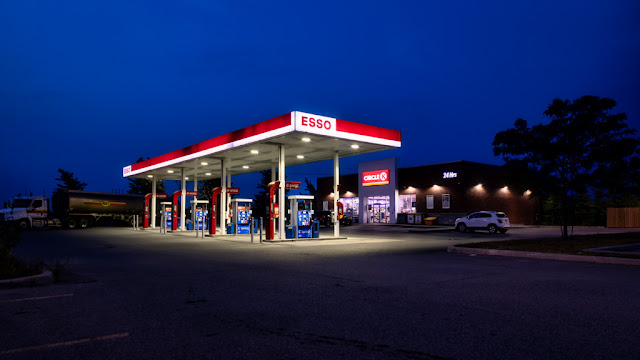 There is busy road just off the left of the photo, and traffic lights are just beyond the cab of the truck. I chose an angle to keep them out of the frame. I like the original result and also processed in b&w, below. 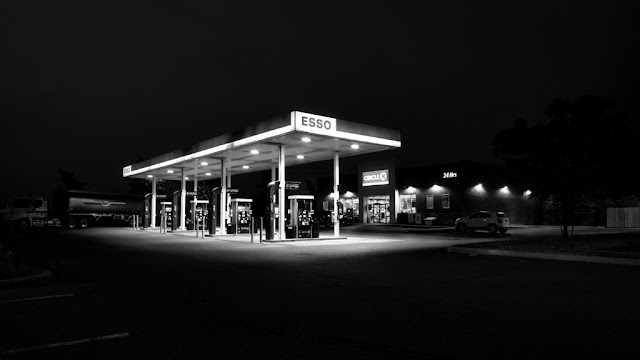 I made the sky darker in the b&w version ↑↑. It wasn't my intention at first, but I liked it that way when I saw it. This ↓↓was another angle of just the pumping area, also chosen to eliminate distracting peripheral lights, at least partly. 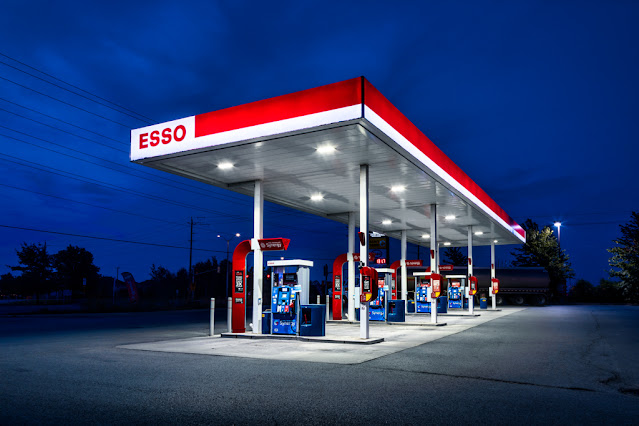 That ↑↑ is my favourite photo of the shoot, but I also took this  ↓↓ one of the series of pumps. I only liked this one in b&w, and I am not sure how much I like it even then. Repeating patterns are supposed to be good, And I think I like it. 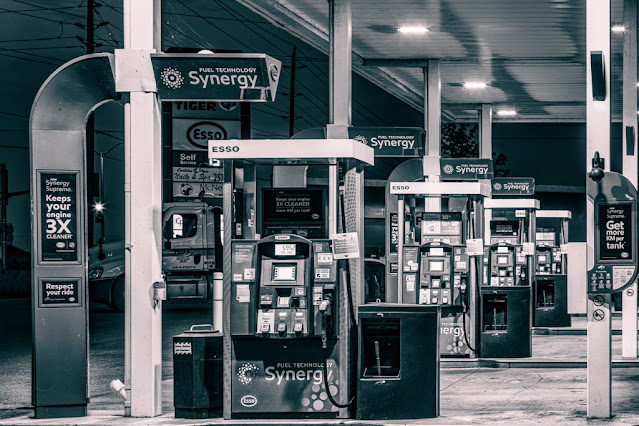 I took an additional photo of the store that was behind me in the above photos. Giant Tiger is a Canadian discount store, something like Wal Mart only much smaller. I don't mean the company is smaller, which it is, but the stores are much smaller, and in my opinion more likable for that reason.
But the photo doesn't turn my crank. The signage was orange-yellow, so the colour wasn't working for me, but the mono version is kind of meh.

The name Esso is a throw back in time for me. All those stations here in the States changed their name to Exxon. You should see if the station wants to buy your photo.

Nice studies of a non-architectural structure...the second one is ghost-like. You're getting ready for a Halloween collection, eh?

Those are all great shots! Well seen and captured!

These are very clever. Your favorite photo is also mine, although I love the pumps one too. I didn't expect too. As you said, it's something about the repeating pattern. Sorry about the heat--ugh. I hope we don't get it back; it's looking like 70s here for a while.

You have it hotter than we do. Our breeze always helps too.

Sorry that it is so hot over there. It is hot here too. Oh well, don't mess with Mother Nature. I prefer the color versions of your photos. Black and white doesn't do it for me.

Number three is really moody. So sad for the heat. We get lots of it here every summer.

Your favorite is my favorite, too. That is WAY too hot for anybody to be comfortable. I'd be sleeping during the day and getting out at night. Oh wait, that's what you're doing, isn't it? :-)

Now if you had had a good sleep this would have been much easier for you!

I like one and three the best. Too hard to choose. ;)

Your favourite is also my favourite. It just speaks for some reason.

Circle K? I thought that used to be Statoil from Norway.

Good for you! I really enjoy your B & Ws. Plus hauling butt outside in the dark!

Good treatments. I hope this is the last of the heat.