Welcome to My Pad 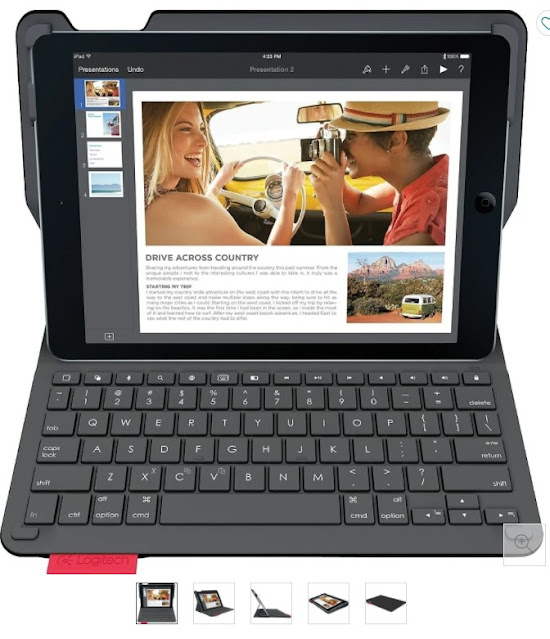 I have an older iPad, which suits me just fine. I use it with a Logitech keyboard that sure beats on-screen typing. The keypad also serves a secondary function of allowing the iPad to stay open at a good angle for reading or browsing. 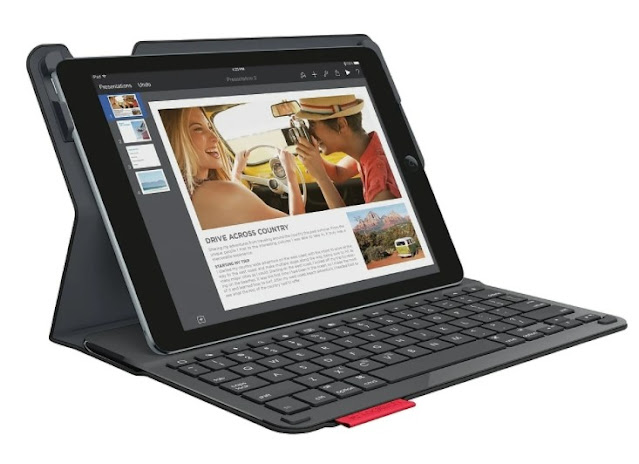 But it has been frustrating the dickens* out of me lately because the holder at the top has worn down a bit, and the iPad keeps sliding out of the case.
Looking online for a replacement was not a task for the faint or heart. As far as I could find, they are no longer available from Logitech. We have a Staples in town where I purchased the original, but they certainly don't stock that model anymore. Neither does Staples online. Amazon had some sort of keyboard, but not this model and the cost was $150 – too rich for my blood, as the saying goes, especially for an unknown brand.
Aha! I did find that the Staples in Kemptville, had one. As far as I can determine, it may have been the last one in the whole province
I went to my store and asked if they would be able to bring it in from the other store? "Ah no. We used to be able to do some of that before the pandemic, but we can't anymore." Say what?!
Also, because the item was to come from a specific store, it could not be shipped to my house either. Let me say that Staples has been very good to me abut shipping items, but apparently, they have have to be available centrally. So, I could order from the store through Staples' general website, but it could no be shipped to me. Go figga.
From first finding the product, I had to wait almost two weeks before I would have the opportunity to drive 61km/40mi, the estimated time by my preferred backroads route being 50min.
I was pretty confident that it would still be available, and sure enough, when I made the order on Monday, I soon received an email telling me that I could come and pick it up. And that's what we did on Wednesday.
We took the blue, rural route, which is also the most direct and also least frantic route. I am not sure why I would have chosen any of the alternate routes, but GMaps initially coded a different one blue as its primary suggestion.
Hopefully, this keypad will last me as long as I need it to although the iPad will require new batteries at some point. With a computer and fairly modern phone, I really don't need the latest and greatest iPad to do what I do on it.

* I looked it up and found that Dickens is really a euphemism for devil in phrases such as "frustrating as the dickens," or "hurts like the dickens." I just use it because I like it. My mother used to say, and Sue and I kiddingly use it from time to time.

Posted by Anvilcloud at 5:15 am

Good for you! I think I am on my fourth version of the iPad, and I use it mostly for watching streaming programs or having a place to read the news and send messages when at the coffee shop. I use my MacBook Air for everything else. I use the virtual keyboard on my iPad and don't mind it. :-)

Endeavor to persevere--and you did!

Good work must be commended! Hip hip hooray! My mini-iPad has to be recharged all the time as it's battery can last for about 2 hours of use...and it is smaller than yours of course. I do like reading books on it, and may look at movies in bed sometimes. The case has started falling apart, so little pieces of it sometimes land on my lap...and I have no idea how to take it off. Maybe a trip to Staples in Asheville is in my future...or Best Buy, not sure where I purchased the case. So glad you were able to get the last one in the world for yourself.

Well, congratulations! David has a keyboard for his iPad but never uses it anymore, preferring to use one finger typing on the glass. I guess it is because he does not like to sit at the table. He would rather sit in his recliner. As for Dickens, yes, I sometimes say it hurt like the dickens. But usually I say it hurt like hell.

ugh, sounds like my experience trying to buy a paddling vest so I could use my new kayak. None of the Canadian Tire stores in the Upper Ottawa Valley had one. Several stores in Ottawa had them in stock. BUT, they could not ship it up here. They would only ship within 50 km. The item was out of stock online too. grrrr

When I first bought my iPad I had a separate keyboard but it always seemed to give me trouble. I don't remember exactly what the issues were but I finally gave up on it. The iPad is really ancient, but so far it still chugs along.

At least you had a chance to venture out of your regular confines to go get it.

Dorothy and Pat were here yesterday for lunch. Doubt our paths will cross again before they head home tomorrow. They're at the local fair now - that was their plan - but I won't be there until 4 o'clock to serve a stint as ticket seller and hand stamper with Dan and daughter Emily. I imagine they will be long gone from the fair by then.

There's a shop downtown, convenient for me, where I got a new laptop a few weeks back.

Glad you found what you need.

One has to jump through many hoops to get some out of date articles.

You were lucky to get the product for an older model IPad.

Glad you got what you set out for.
I love all the potential Google route spaghetti lines.

It's great that your perseverance led to a victorious outcome. I love my laptop's actual keyboard and don't do well with a virtual one. I don't have any Apple computers besides my iPhone though. I do have an ancient desktop that may or may not turn on, running Windows XP. (which I still prefer to Win10)

It is indeed unfortunate that once a tech item gets outdated, all too soon these days, that accessories can be hard to find. What’s amazing is that many things like Staples now being able to deliver to a store closer to you are because of Covid. Hope this replacement lasts as long as it’s needed.

I have the pricey keyboard (Christmas present). I don't use it much, though because it still puts my wrists at an odd angle, compared to my computer keyboard. I learned to be a touch typist on a manual keyboard in high school, and I am fast, still, except if I have to hold my hands flat, when I make a lot of errors.
As I recall, I had the only typewriter ( a small portable, grad gift) in my university residence in first year, and was the only touch typist. I made money typing essays, she said, grinning widely. But I insisted my kids take typing in high school, even if they had to rearrange their (very limited) choices to do so.
My grandkids type with two thumbs, swiftly. But I can still go faster.