Sha and the kids are overnighting in Kingtson where they are shopping and visiting extended family. Of course, pictures were posted on FB. I hadn't seen them yet, but Sue was seeing a certain likeness between JJ and me.

I scoffed, for I had never seen a similarity, but when I looked at the photos, I was startled. I saw it too, for the first time ever.

JJ started life with very light coloured hair (like my Dad) , so there was no resemblance there. And in recent years, he has worn his hair with one side long. But he has cut it, and now we begin to  see a certain  likeness.

We then looked for comparison pictures of me as a kid, but couldn't find one that showed the similarity. My goodness! Photos were awful back then fuzzy and faded and we took very few compared to now. I was thinner and taller at that age and combed my hair in a wave up front. There is more of a resemblance when I am older (see later photos, below) and ditched the wave.

Anyway, whether you see the resemblance or not, I scanned some photos, which give me something to blog about today when I wasn't going to bother.

First, his pic (and Danica's) in a restaurant in Kingston. I converted it to b&w because all of the old photos will, of course, be monochrome. 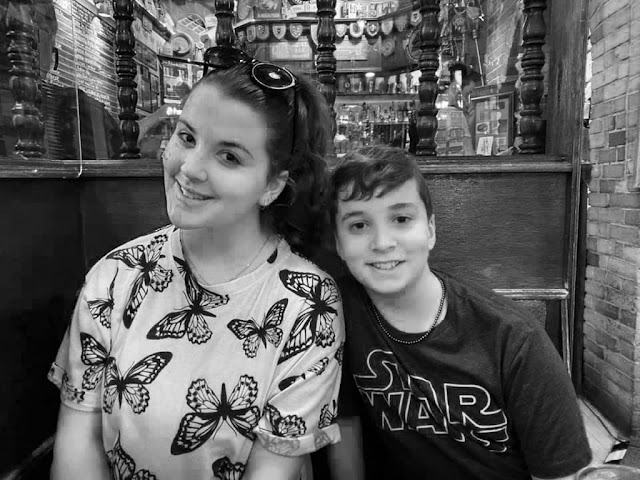 Coincidentally, I also paid a visit to Kingston when I was twelve. Little similarity to be seen here, though. Here are Dad and me on a rainy day at Old Fort Henry. 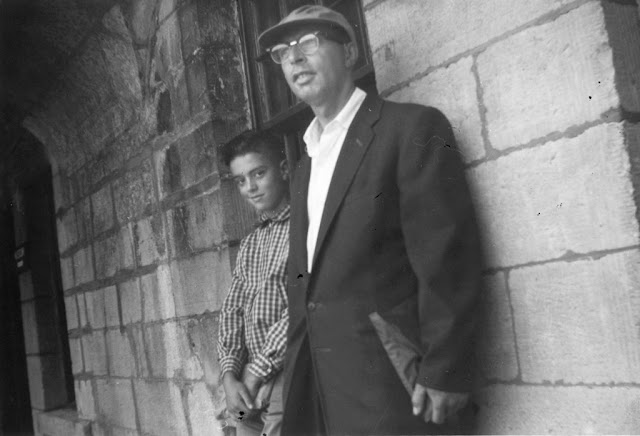 Here is Jonathan by the water, followed by me near the water in a hideous swim suit, also on the same holiday (I think). Nothing obviously similar here as I am definitely skinnier and, seemingly, taller. 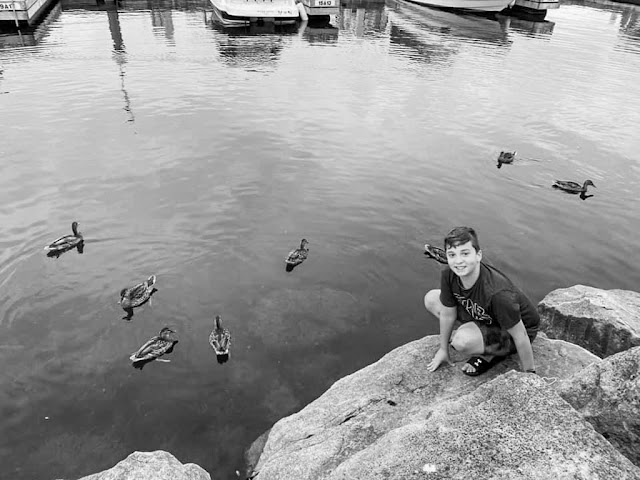 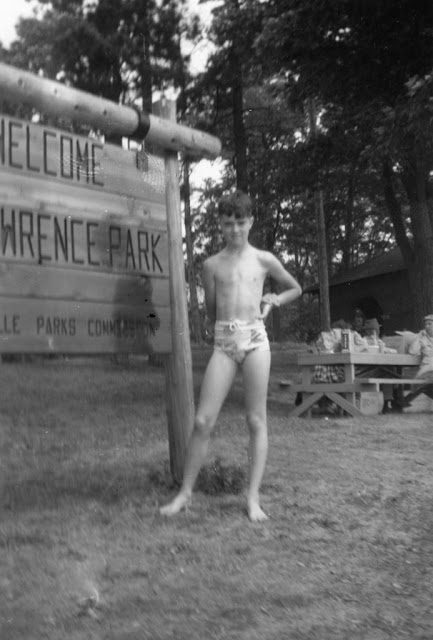 I found a few other snaps of me at about the same age: at Christmas with my grandmother and parents. 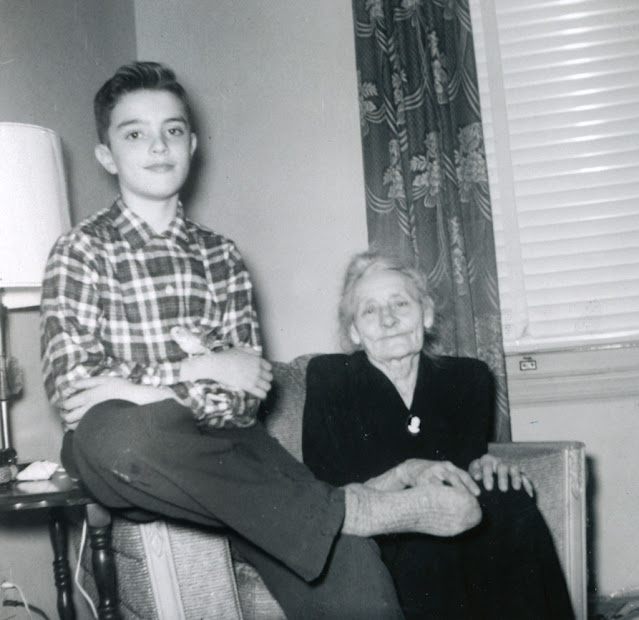 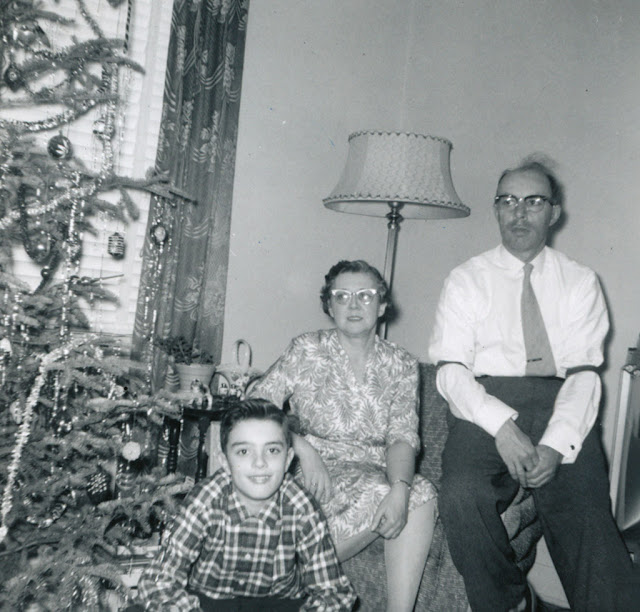 Although I am a few years older than he in this next photo, I can seen more similarity here when I was ~16, filling out a bit, and styling my hair differently. 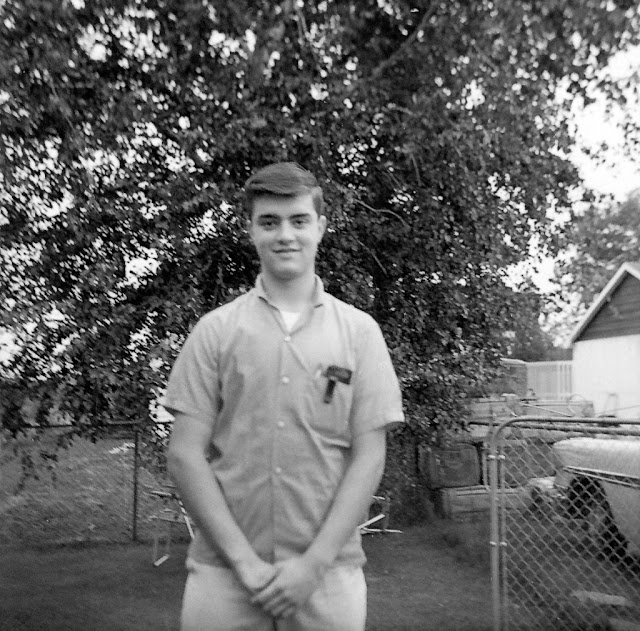 Years after that, I think my university grad pic also shows some resemblance, but who knows what he will look like in 10 years time. My hair is really low and most like his of all of the photos. 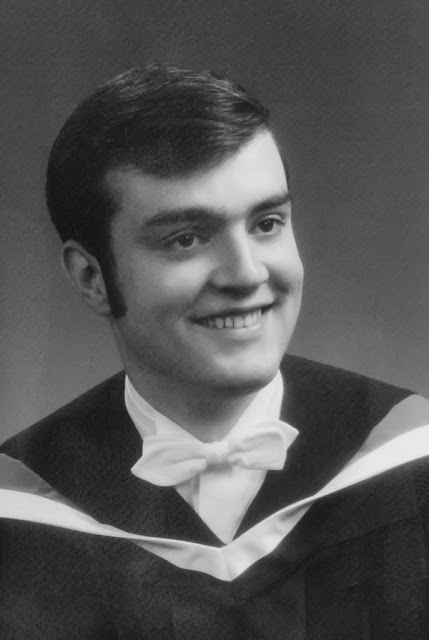 It was startling to see something that has never been apparent before. Actually, we could never figure out any resemblance of JJ to anybody at all. We can see inherited genes in Danica, but Jonathan just seemed to have a completely different set of dominant genes.

When the waves roll on over the waters

And the ocean cries

We look to our sons and daughters

To explain our lives

As if a child could tell us why

That as sure as the sunrise

As sure as the sea

As sure as the wind in the trees

We rise again in the faces

It's a great song. The complete lyrics are here.

And, of course, because it is the 2020s and not the 1950s, I can post a video clip of the song sung by my favourite band, The Rankins. It was done as an Encore in a noisy venue, and I have started the clip after the clapping when they began the song. They also sang this at their Farewell Tour stop in Ottawa and Raylene just about blew the roof off. She died later of cancer, and I suspect that she had been diagnosed at the time, and this song meant an awful lot to her. (It's a poor, amateurish clip, but it means something to me, so here it is.)
Posted by Anvilcloud at 8:22 am

I love to look at old family photos, especially when I look at how much we have all changed. It's nice to see you as a young man. :-)

There is a resemblance.

It's the EYES AC. For sure.
I love the Rankin's. We played Fare Thee Well for the recessional at my mothers funeral.

He does favor you. I think as the person being compared to its hard to see it for yourself. what does JJ think?

The resemblance started with your Christmas photos...your smile, and your eyes. Yep, he's got a bit of you coming through!

He does favour you for sure! Love the Rankins too.

Definitely shares your smile! It's great to look over old photos; I treasure the ones I have.

I love that song and have a clean version on a cd.
I think the resemblance is a bit around the eyes and the set of the mouth, but the colouring differences, even to the eyebrows, make it difficult to see. Family echoes are fascinating thing to look for. Can you change the colouring to make it match?

What... no red plaid back then?

Yes, I like the Rankins. I have a CD of them that I haven't listened to for a long time.

The picture of you with your dad at Fort Henry is exactly your granddaughters face. Just add hair.

In fact, most of your younger days photos look more like your granddaughter than your grandson in my opinion.

Hard to believe you cannot see the resemblance in all those photos. He didn't end up resembling you; he always resembled you!

I can see a resemblance--yes.
Love the old pics, too.

Wonderful song! And I love the old pics.

It was great to see the old photos of you. That's how I remember you best. No wonder you were my first crush! :-)

These are fun!
I find genetics interesting. Like Red, my parents were often told I looked like my dad, despite me being adopted. And him bald with a beard!