I have not been roaming with the camera during this hot spell, but I did get out very early one morning before the heat wave arrived in its fullness. I took the camera to our main street when it was beginning to dawn. Lights are usually still on at this pre-sunrise stage, but the shooting is a little easier than when it is pitch black. Mind you, I could have left it still a little later to get a little bit more ambient light.

The town keeps some Christmas-style lights up all year, and these are primarily what I wanted to shoot, especially if I could include some lit storefronts in the photo.

In this early light, exposures will be long, so one needs to use a tripod. I took one hand-held photo anyway, just to get a sense of the scene. But I forgot that I often have a 2 second delay on the shutter, and I wobbled the camera all over the place, which resulted in funky twirls of light. 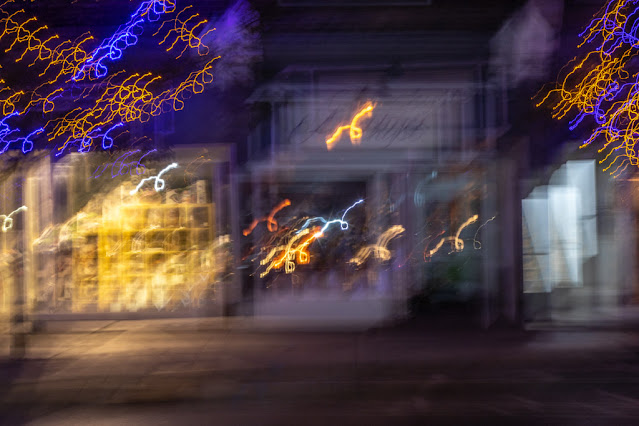 But then, for fun in edit, I superimposed that photo on another, steady one of the same scene. 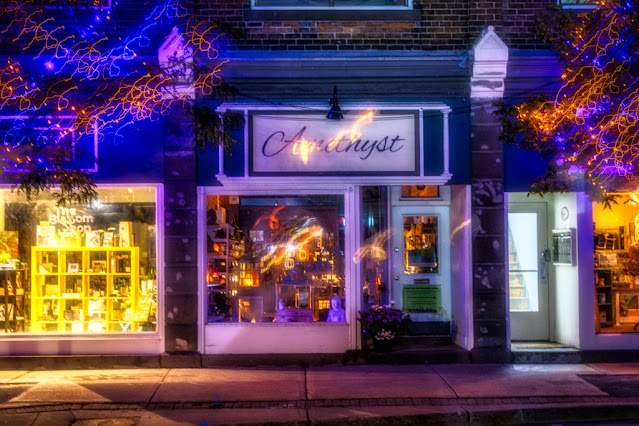 A wider photo with the same store, Amethyst, in the centre. 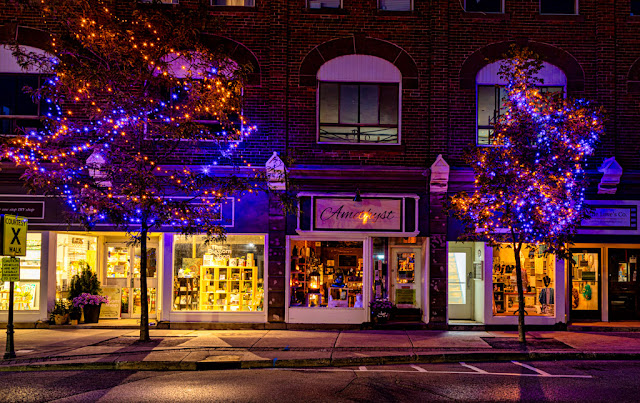 Then, I took some vertical photos ↓↓ using the tree, which is on the right, in the above ↑↑  photo. 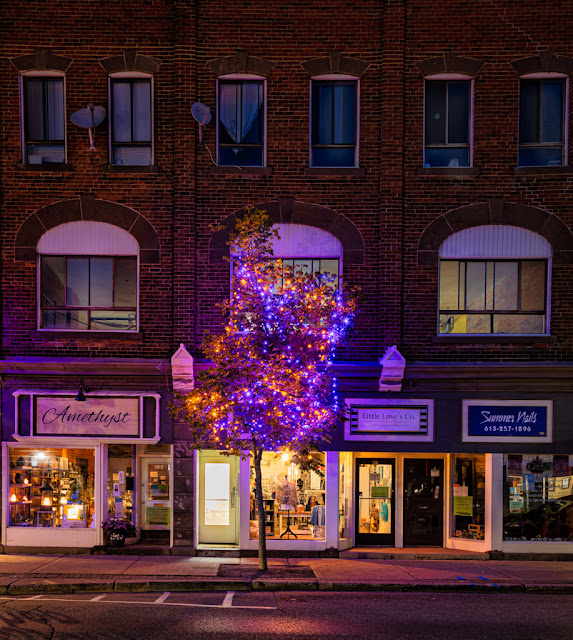 The next photo is the same composition as above, but in the 6-second exposure, a car went by leaving a light trail, so I cropped the photo differently, eliminating the darkened 3rd storey windows. Yes spellchecker, I do want an e in storey. 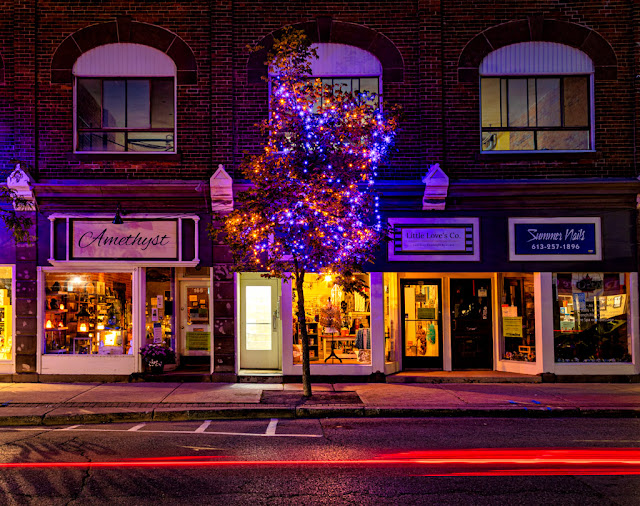 I moved down the street and photographed the post office, in which the highlight is probably the flowerbed. 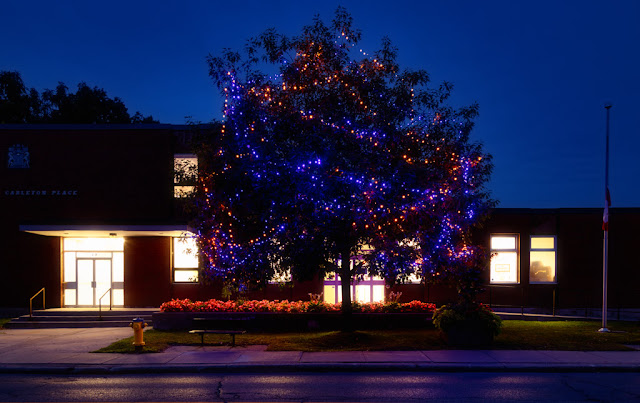 All in all, it was a bit of a challenging shoot, so it took me almost a week before I was satisfied enough with the photos to post them. I am often disappointed when I initially see the photos on-screen. For one thing, they are in RAW (ie only partially developed) format, so they require some processing. After that, they may require a little more processing to season to taste until I am somewhat happier with them.

Posted by Anvilcloud at 6:42 am

A photographer I know locally refers to raw photos and my eyes glaze over. Point and shoot for me. I like what you did with these. You play with photography and I enjoy your efforts. It’s a great hobby!

I think you did a great job with all these photos. My favorite is the superimposed one with the squiggly lights.

I also liked the second combo one! But these all have a sense of, I don't know, flatness? Whatever doesn't include any perspective. I guess that was what you aimed for. I never heard of raw and processed photos with digital cameras...so that's what makes yours so much more evocative. So glad you do what you do!

I really like the results here, but I was curious too about your terms "processsed" and "partiallly developed" because it suggested print photos instead of digital. My husband does black and white print and uses those terms. Are these photos digital, or print?

You are lucky to have the lights close by. Nice job. I like the composition in 3rd down the best.
You are certainly an insomniac. Yipes.

Lights at early dawn are lovely ... even if I don't understand all the steps that got you there !

I enjoy your photos and your description of the process, which is sometimes over my head but still fascinating. My favorite is the squigglies superimposed on the clear one. Atmospheric.

A lovely group of photos.

I bet those shops in your photos would be willing to buy a nice print, or even pay you for the right to place them in their online advertising. (Hubby was a commercial photographer.) Linda in Kansas

You must be happier with the colder nights! It's been terrible.
Well done with the manipulating of photos. I find it really interesting.

You do such interesting photographic experiments.