Another Day, Another Park

It is summer, so we do like to sit in a shady park, especially our local park, right by the river. The day was hot, but it didn't feel like it as we enjoyed gentle breezes that stirred under the trees by the water.

We were joined by Bob and Barb. I did get a pic of Bob. I overexposed because his face was in shadow against the bright sky. That blew the sky out, but I don't mind the effect at all. 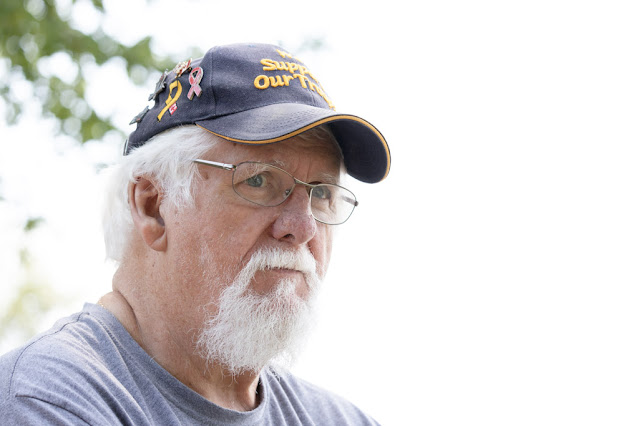 I find Bob photogenic in the sense that his visage is interesting and full of character, but I didn't get the camera out to photograph Bob. Naw, it was to photograph the brood of ducks that started on the far bank and swam a little closer.

They didn't look like mallards to me, which are about the only ducks that we see here. At that distance, however, I couldn't tell what they were, so I got my camera and telephoto lens from the car and saw that there were mergansers. There are 14 in the picture. There might have even been a few outside the flotilla, but I can't remember. Fourteen is a heckuva lot for ducks that are not common hereabouts.

All sorts of kayaks paddled by, most with kids who are participating in day camp at the canoe club. One does see interesting sights sometimes. A couple of smartass boys got out and walked their kayaks past us in the shallows near the bank. Another lad sat facing the stern and tried to paddle back-to-front as it were. I hadn't got my camera out yet, but I did take a few later once I got the camera out for the ducks.
Unfortunately, canoe/kayak photos have never been very inspiring for me on bright, sunny days. 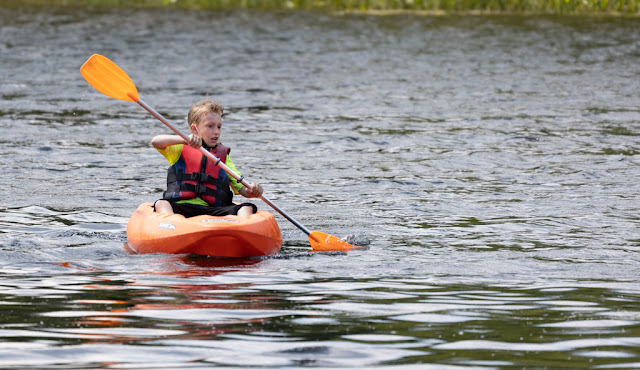 They weren't all kids. This next fellow had something like a kayak, but not quite a kayak, rigged up with a chair from which he was trying to fish. I've never seen anything quite like that on the river.
For once, we didn't have either fries or chips, which are the same thing, of course.
I have talked about this previously, but in response to a recent query by an American reader, we do generally call them fries in Canada. But we refer to the trucks that sell them as Chip Trucks, not fry trucks. So, we may sometimes refer to them as chips, like the English do, in that limited context. However, most of us call them fries, like the Americans do, most of the time. I mean, we just wouldn't walk into a McDonalds and ask for chips. Heaven forfend! We would probably usually even call them fries when ordering from a chip truck. Strange, eh?
BTW, for us, like Americans, usually chips are potato chips sold in bags. The Brits call them crisps.
In summary, we can, occasionally, call fries, chips (like the Brits), but only in certain cases. However, we never call chips, crisps. Our English has become highly Americanized, but we usually, but not always, spell like the Brits.
Yall straight now?

Thanks so much for the language of Canada lesson! Loved seeing Bob's face...very interesting indeed. The boater with the non-kayak was pretty cool too. And you forgot to tell us, was this on your Mississippi River?

Yes! Our Mississippi. There is actually another one in Ontario called the Little Mississippi. It's near where we used to cottage. https://en.wikipedia.org/wiki/Little_Mississippi_River_(Ontario)

Very humorous take on the saga of the chips and fries and crisps controversy. Now I know. Thank you! I love your photos of the lake. Those fowls look amazing, whatever they are called.

Fish and chips is a go to phrase on the east coast for sure.

Yes, I like both the photo and the chips. :)

And now I know the full story on chips, crisps and fries so thanks for that information. We watch a lot of British programming on Scorn and now BritBox so one never knows when that info will come in handy. We often see kayakers on the river near our apt, but that guy's chair contraption was a new sight for myself.

I never eat potato chips but occasionally do eat fries. They taste the same in any language. I love the merganser picture, as well as the old guy. :-)

That's a lot of ducks.

When you talk about fries(chips) I stated to wonder what I say. I think I say "chips".

What odd but nice looking ducks. :)

Merganser young will often join forces, so the birds you saw probably was a combination of two broods. Great to see, huh?

What a great time! You did well with your photo of Bob.
That kayak is a hoot!

From time to time I recall with pleasure a sign I saw on a roadside stand in Quebec many years ago advertising French Frites. The e should have an accent aigue on it, but I am not smart enough to toggle to a French keyboard.