Big Smoke at the SmokeBox

Yesterday was our 5th visit to a local food truck called SmokeBox. While this sounds like an awful lot of visits,  they have taken place over a period of more than 3 months.

They make the best tasting burgers, and they're also very big and filling. They must be half-pounders, and we can fill up on about a half burger. They do cook other specials too, such as the chicken parmesan that we once ordered. It was also fab did us for 2 meals.

We normally, order the Swiss Mushroom burger, which is quite wonderful, but they had a special burger recently, a maple, apple chutney and brie concoction, that has to be the best that I have ever tasted. When I commended them on that burger yesterday, they said that it may go on the standard menu very soon.

It is not a chip (fry) truck, but we order the pineapple claw as a side, and it is also fabulous. There aren't actual pineapple bits in the slaw (thank goodness) but the taste is drizzled in somehow. Yum.

I wanted to take a specific photo, which I will get to, but I'll begin with the truck itself. 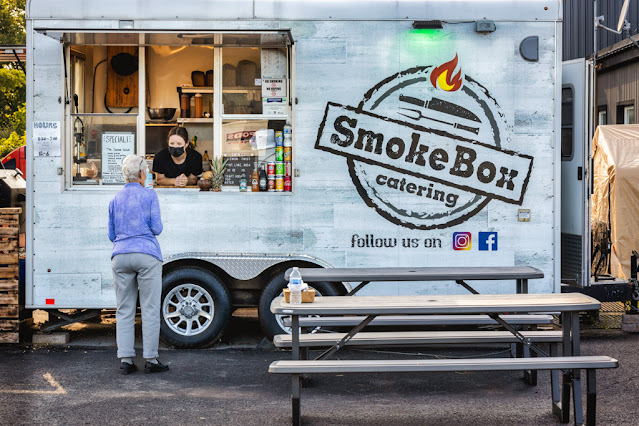 The cooking is done through a window on the left side ↑ that you can't see ↑ so I took a photo from the side. ↓ As you can see, the cook sticks his head through the window to access the smoker. It is a job for a good, young back. 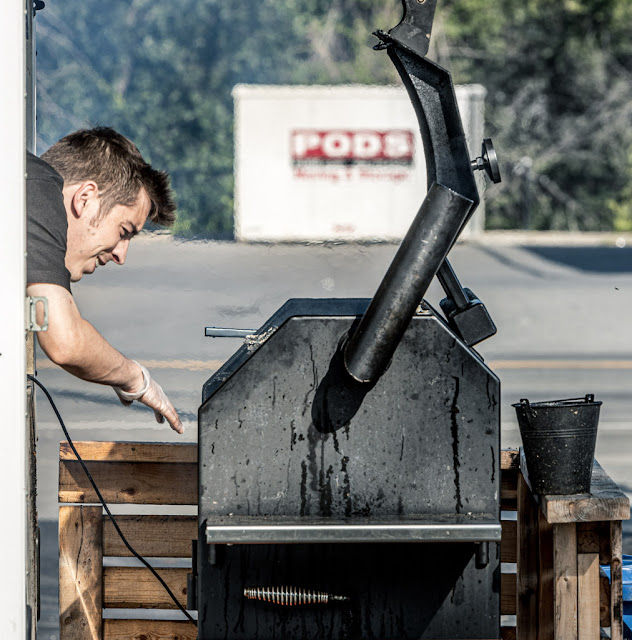 At first ↑ the smoker wasn't yet smoking as much as I had seen previously, but I got this ↓ next photo from the front side a bit later. It was the photo that I had wanted all along although it isn't a good as I thought it might be. It does capture what I wanted however – The Big Smoke, as it were. 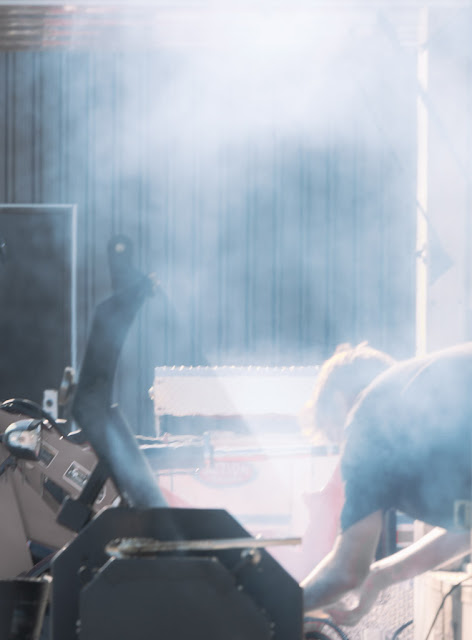 There was a question about RAW photos on the previous post. This is my answer for those who are interested, which I don't expect will be everybody.

With most point and shoot cameras and phone camera, you are presented with a developed image in jpeg format. The camera has made a decision about how to process the image into a final product. That's it. Whatever other information that was gathered from the sensor is then discarded.

More sophisticated cameras, offer the photographer the option of shooting in RAW format. The photo editing program will give you a basic interpretation of of the photo, but the photographer almost invariably has to push the partially developed result a little further.

Fortunately, the RAW image contains all of the original data that went to the sensor in the first place; no data is discarded. Was the scene brighter than what you see on the screen. It is easily adjustable, Is the colour not quite correct? You can fix that too.

It's not that you can't edit a standard jpeg image; of course you can. But it is more limiting without all of the RAW data, and you can degrade the quality more easily.

Most serious photographers, therefore, shoot in this RAW mode most of the time. Sometimes, they will choose to have the camera save both versions. A football photographer, for example, may want to get their images to the publisher very quickly at halftime and not have time to fiddle with processing. However, they may also keep the RAW version to work on later if they, personally, plan to take the image to print.

Posted by Anvilcloud at 7:58 am

I don't usually shoot in 'raw' ... too lazy, I guess. But this explanation is just excellent. Thanks. As well as entertainment value, you teach extremely well.

We have food trucks here in Hawaii, but sometimes they are covered with graffiti. Ugh. So it is nice to see such a clean food truck over there where you live. I think the food sounds awesome, but as you say cooking it is for young backs. LOL.

That last hamburger you had sounds really good.

Thanks so much for explaining the Raw vs. edited photos. I guess that's how some posts are so vivid that I don't particularly think they're realistic...colors that just amaze me. The photographers must have a way to intensify colors. I think I saw something in a photo edit program that would also do that. Mine are just sometimes cropped. I've got a FB friend (another subject here) who drives a food truck around NC who makes wood fired pizzas in her truck. She just built a new wood firing oven in a new truck (or maybe just a trailer) and has a gig coming up, so I hope it works. That smoker would certainly make hamburgers tasty.

That's an excellent explanation which EVEN I could understand! :) I'm not a burger person, but the dishes from this place sound unique and creative.

Good explanation! Also, I'd like one of those burgers, please.

Thanks for the explanation of RAW photos. You are the third person I’ve heard describe them. I will still do point and shoot. I just take photos.

Looking forward to seeing a photo of those great sounding burgers in a future post, AC. You will make your readers droll a bit based on the descriptions here. Also appreciated the info on RAW vs JPEG, also RAW images will consume more meory both on an SD card and the PC.

This sounds like a safe way to eat out. We are shutting ourselves down again at our house because the COVID numbers have exploded here in Hawaii.

Your smoke picture almost made me cough. Not being a burger eater, I would have to pass on that one. :-)

I used to make a slaw with a tiny bit of pineapple juice in it. Actually, just the taste was there, no actual pineapple. Half the family ate it because it was wonderful and half the family wouldn't try it because they might bite on pineapple. (More for the rest of us!)

Good explanation.
I've not heard of this truck.