When I posted the car wash photo yesterday, I hadn't planned on taking the editing any further, or at least not right now.
What I did think was that I would like to try again sometime when there would be clouds in the sky. Then I thought, "Wait a minute, ya big dummy. You can put clouds into that photo." So I did. While I was at it, I also toned down the lighting. It's just an alternative version, that's all.
Here are both edits; the newer edit is the first. You saw the second one yesterday if you dropped by, Seeing them together, I think I prefer to whiter or bluer lights of the original version (second photo).

I had taken a few more photos, so sometime after after re-editing the above photo, I wondered what I could do with my pic of the vacuums. Neither the original version nor the monochrome conversion inspired me. Then I decided to leave some colour (aka selective colour) in the b&w version. It's certainly more interesting and appealing than it it had been, at least to me, despite the fact that some photogs consider selective colour to be cheesy. 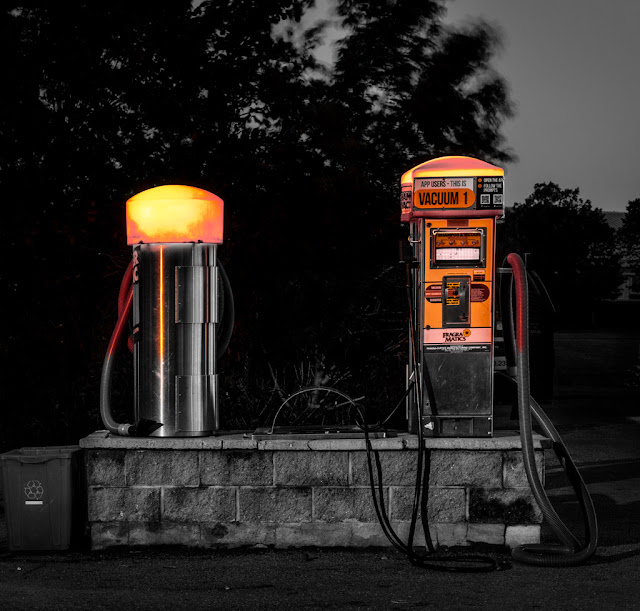 Later, I decided to apply the same idea idea (selective colour) to another photo of the car wash itself, just leaving the top signage as it was. 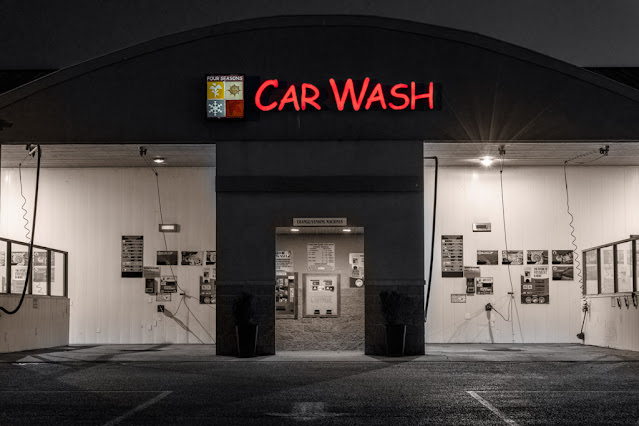 I didn't do all of these edits in one sitting. I came back to computer at different times and just fiddled around. As I mentioned earlier and again in retrospect, I think I would prefer brighter, bluer lighting, but this is where my muse took me at the time.
Live and learn. Experiment and ruminate.
Addendum: I re-edited. too blue? Not bright enough? I just don't know. 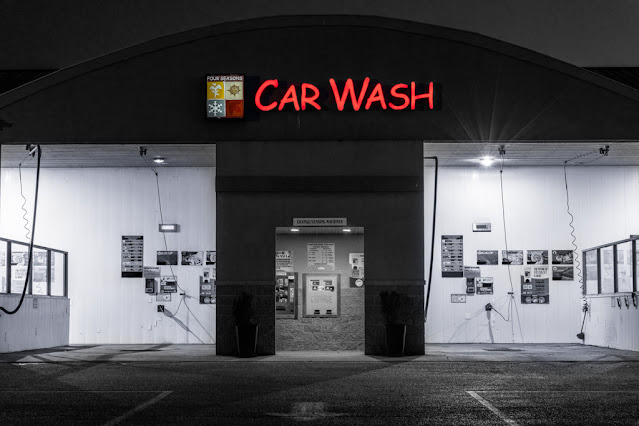 Interesting what you can do with photos at a plane old carwash. You do have fun.

It is amazing what you can do when you try to edit a photo. I would not attempt it because I don't know how. Anyway, both versions look good, and they both have their own appeal. I guess I prefer the one with more contrast with the brighter interior.

You aught to be very pleased. That first photo is great with the clouds in the background. The moon over the cornfield is a great composition but very washed out. Could the corn be darkened? You are having too much fun. :)

Your editing and thought processes are fascinating and create some works of art.

um, not sure. The back of the car wash is busy and I find that distracting. I like the first edit more, I think. Still thinking.
Selective colour looks like fun - I haven't tried that. Maybe on my disgusting drooping caterpillar shot.
Just in passing. JG says we have very few to no egg masses where there were a lot last spring. Maybe the fungus got them.

You're getting some great night-time shots, even if I don't know about those clouds.

Love this series, Ac. I don’t know how you do it, really!

Loved the moon shot...very spooky! When I see the stretched out nighttime carwash I really like its high contrast. Glad to be back to see your daily photo experiments. The selected colorations are interesting too!