Lights in the Night 3

Here's the latest in my Lights in the Night photos. While I haven't previously called my recent photos that until now, I figure that I need a name if I am going to continue the theme. What I am trying to do is take photos of town buildings before sunrise, at that time when it is beginning to lighten but the lights are still on. I am tending to sleep past that hour these days, but as the sun is rising later and later, I will, perhaps, be more consistent. But then there will soon be more people around, so that will be a problem. Regardless, I did awaken early enough yesterday to make* a few photos.

I just went around the corner to take some photos of the Shoppers pharmacy. It's not the most compelling subject, but at least I can tick off that box.

You can see how the sky is blue, which should be better than in the black of deep night. While clouds are considered to be preferable, maybe just the straight blue works well enough in this case.

I took a closer photo, which I prefer in b&w. 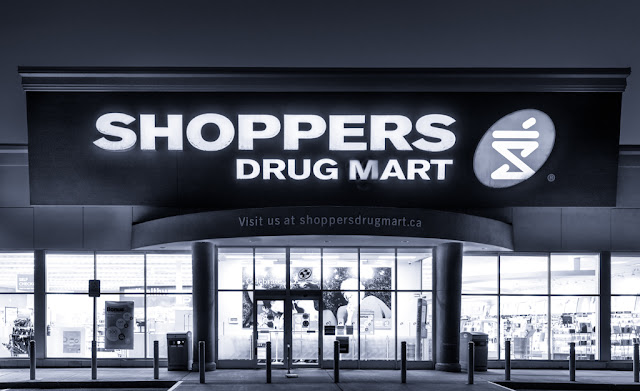 Next, I drove around the corner because I spotted some pre-sunrise colour in the distance over another building. When I got there, however, the colour was gone, at least from my vantage point.
But then I saw a fairly attractive nearby medical building, which was quite nicely lit. I got the starburst (rays) effect by using a very small aperture. I don't always prefer this effect, but I like it in this case.
I also like this photo in b&w. 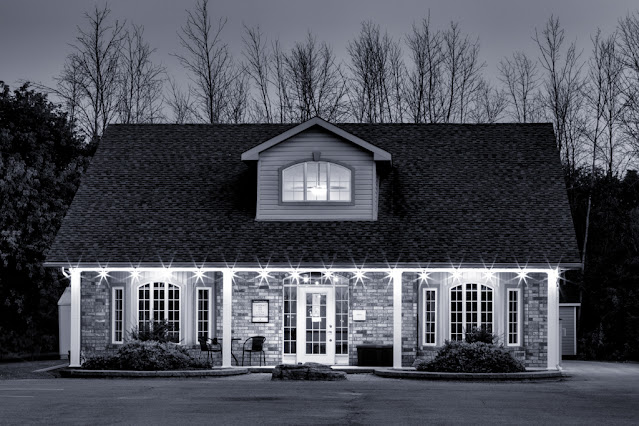 Who knows when I will make my next wee hour pilgrimage. After a somewhat restive night, I sure didn't arise in time on this Monday morning.
* Sometimes, photographers use the word "make" rather than "take" when referring to their photo attempts. I usually avoid that usage because it tends to sound pretentious to me, but I used it deliberately in this case to make a point because I think it fits the recent discussion of RAW photos and some of the comments that ensued.
Note: If I am now labelling these photos as Lights in the Night, this would be the third post after the car wash and downtown lights posts.

Posted by Anvilcloud at 7:31 am

Ah ha, you were printing your work when I woke early this morning, and there you are! I like the colored prints best, somehow the B&W just doesn't have as much to say with the simplified geometry of a straight on building...but then again trees...I will keep looking at these! Thanks for getting out there early. Hope no mosquitoes wake up, and it's probably pretty cool.

I like the medical building in color the best, but they are all worthy of publication (at least on your blog). :-)

I like the medical building in both color and b&w; they elicit different feelings. The b&w is more stark.

I really love those starbursts. That is just so cool! They seem to be more pronounced in the color version.

Good idea for a series, and challenging to photograph.

I actually love seeing lights at night. I've enjoyed all of these. :)

Love your photos. I wonder however why the lights are on in the pharmacy? Is it open through the night?

Since no one commented previously on the series title, let me be the first, AC. It’s a good choice and the comparisons between the original and b&w were interesting and in fact I liked the mono look in all.

@Christina. AFAIK every main store that I know of, remains lighted for security reasons.

You really nailed the blue and I like the b and w medical building a lot.

You do good work. I like the colour, though. Winter lasts so long!