Previously, I  wrote a little about the long Scottish line of my pedigree, but this post is about Sue's lineage. Lineage: I like lineage. It sounds less like I am referring to a show cat although Sue most definitely is the cat's .... ahem ... sorry. I do tend to get carried away.

Almost 20 years ago, Sue received a nineteen page, photocopy of her lineage on her dad's side, the Mortons. We were wondering where the dang thing had got to.

One recent day, we (as in Sue) decided to clean the pile of mailers that I had kept sticking between the filing cabinet and the shelving unit. Said pile was just about chest high, and one doesn't really need quite so many used mailers, as nifty as they are.

And there it was in a folder at the bottom of the overflow. Of course, unlike in the following photo, it was stuffed in sideways at the time. I repent that I did not think to take a before picture, but the mailers went up and up, beyond the level shown in the photo. The ones remaining are unused and potentially useful. 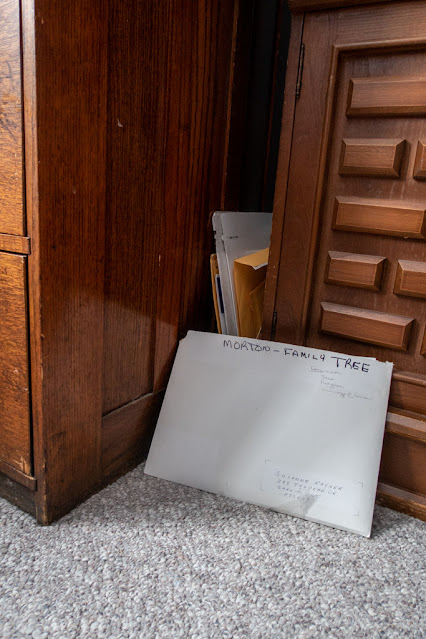 This document on the Mortons was compiled by a relative whom we have never met, P, from Alberta. It made its way to Sue in 2002. P had tracked the Morton line all of the way back to 1200 CE in Yorkshire, England, when her earliest known ancestors were called De Marton. 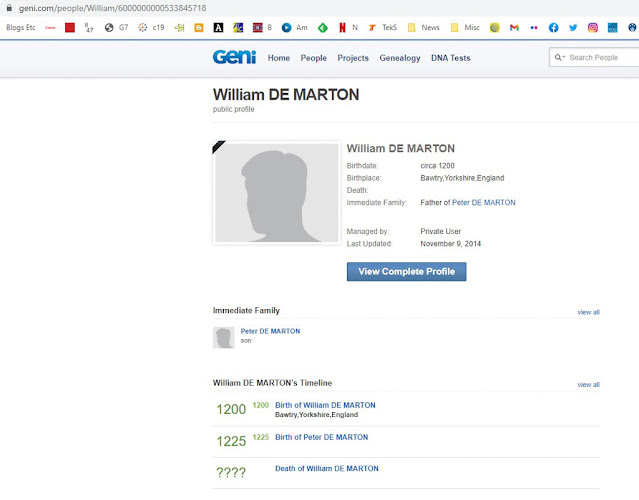 The de Martons seem to have been Lords of Bawtry in Yorkshire for many generations. However, they dropped the de, changed the a to an o, and became just Morton in the 6th generation, probably ~1350. The first named Morton was Sir Robert Morton, at the bottom #6 of the pedigree snapshot below. 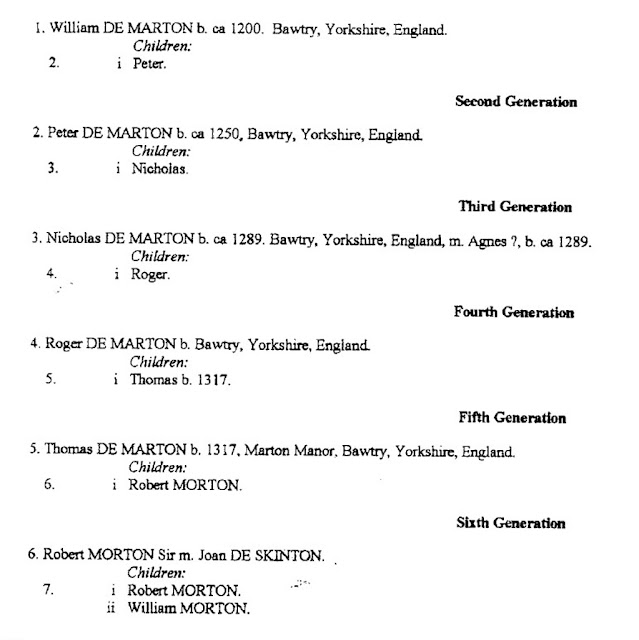 According to P's findings, Robert married Joan de Skinton and sired two children. Their son, Robert, continued the line all of the way down to Sue and, of course, Shauna and then Danica and Jonathan. I make it as 25 generations from William de Marton to Dani and JJ.
Given the historical period, a little over a century after the Norman conquest in 1066, the De most likely indicates French/Norman ancestry.

Strangely enough, I was once told that my surname, Rayner, also derived from a Norman (I think, knight) from Yorkshire. I have never confirmed this, but it is possible that our ancestors knew each other back then.

There are 5 more generations on page 1 as we edge toward the 1500s (repeating Robert Morton from above, #6.) 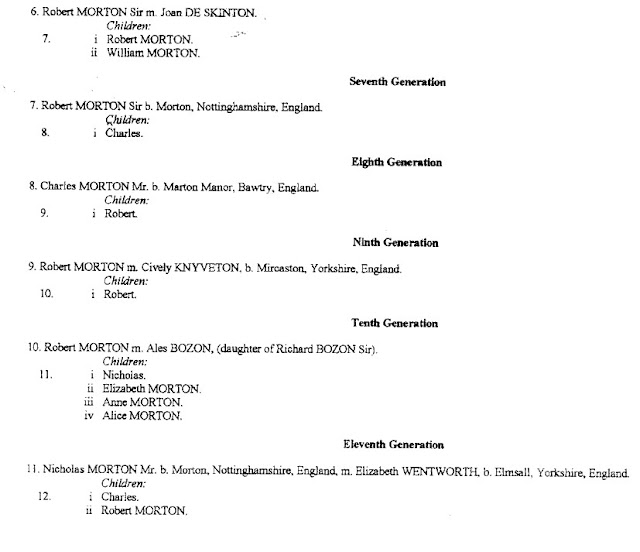 With my current Ancestry subscription, I cannot really verify these very early records. I refuse to pay an extra $12 to $15 per month for the privilege of delving into the older records and don't know if  even that would do it. What I can tell you is that up until about 1500 (which begins on the next page and which I am not bothering to post today), P's research seems to be very congruent with Ancestry information. There are dating discrepancies as we proceed into the 16th century and later, but her findings work really well overall.
I don't know how P was able to accomplish all of this remarkable research back in the days before the internet or at least before much internet. If this document was sent to us in 2002 after whatever amount of time it took to go through a few hands, it had to have been compiled mostly in the 90s. I am recalling that the internet didn't become much of a tool before about he mid-nineties, and it was still pretty rudimentary back then.
I am guessing that P was not short of funds and could travel for her research if necessary and could also afford to purchase copies of documents.
There will be more to write, but that is enough for one blog post. Stay tuned.

That is so interesting!
I found, during my research, that names were written incorrectly in many incidents.
This is really impressive.

I have done a little digging but have been stumped at my maternal Grandmother. I may take a short term membership with one of the Ancestry sites, just to get past this hurdle.

My family, on my mother's side, were very heavy into researching their ancestry so I have reams of info and photos (even including 2 dagueriotypes (sp?) but I can't answer your question as to how they obtained all the info.

That is fascinating, to find all that information through some means or other, and to have been gifted with it. I cannot imagine being able to find out such lineage information in my own family. Glad you have it!

That is a lot of research to create that lineage. I know an uncle of mine was a great geneologist and researched my mother's line and my father's . He was my mother's brother. He traced our heritage back to the first immigrant to PA in late 1600s. He also had the story about how that ancestor came to emigrate from Switzerland - religious persecution.
Recently a cousin of my mother in law contacted me through Ancestry. He has records for that line of Dan's family. He was going to share with me but haven't heard anything more.

Excellent find...and it makes me wonder what I've got hidden in various piles, and behind and between things! Spring housecleaning is coming soon. I was given a carbon copy of my grandfather's typed info about his genealogy. Someone in the Rogers clan had paid a genealogist. And they were thus eligible for the Daughters of the American Revolution, a rather "ta da" kind of club which I didn't care to join. You all don't have that problem/gift. But there are publications I've found through the years, as well as historic societies in most older towns...and don't ever forget libraries and news articles. Just in case you get bored...good luck. It's a great rabbit hole to fall into. Last night I found a whole lot of photos on Ancestry of a wife of my great great uncle...and her children from her first marriage...they really look like what I imagine Texas ranchers look like. I'll be posting them on my family tree blog soon!

Again, I would take this with a huge grain of salt especially when looking at the 3rd, 4th and 5th generations. Nicholas was born around 1289 and had a grandchild 28 years later in 1317 meaning the average procreation was occurring around 12 or 13 years of age to account for gestation periods.

Down the rabbit hole again! I love looking at family trees and such!

I find the Ancestry info overwhelming. I can spend an hour and that’s it. I admire anyone who has done the amount of research you describe.

Fascinating! There is still so much I want to pursue, especially on my late husband's side. My mom's line in Italy has lots of holes too. I've found that the internet has helped genealogists immensely, but also caused many discrepancies and false leads. A couple of my cousins have gotten a hold of the wrong Robert Grieve and traced him very far back. The problem is he's not our relative. Is Rayner English? I think of Ray/Rey/Roy as having to do with kings. King John. :)

The mid-90s was not that rudimentary, was it? I recall chat rooms and lots of internet back then. We used computers in my law office in 1997 after which I quit my job. But, you are so into ancenstry.com. I don't think I'll delve into my Korean past. How could I? I don't speak, write or read Korean. Haha.

Margaret. I believe that I have actually heard Rayner used as a first name. I think it was German. So, it would be that there was a Rayner who led to Rayners. Is that called patrilineal?

Gigi. I used computers from pretty early on, but I think I got on the internet ~1995, and I don't think I was very late to the party.

I'm interested in ancestry . One finds obvious errors. I find stuff on Family search. The LDS church has young missionaries doing the research.

I paid extra for years to search old and foreign records. I finally realized I was not getting my money's worth and dropped it. And later on dropped the whole ancestry subscription, in about2012. The entire file is still ono my computer; I can look at it and add any additional information I may find. It just cannot be shared.

My family background goes back a couple of hundred years and then drops into the mists of time.

This is so very impressive. My aunt told me that in Japan ancestry/lineage is tricky because at one time you could buy a made up lineage and pass it on. Hmmmm....

I descend from the Earl of Derby, Lord Stanley - yes, those Stanley's. It has been my experience that having a noble in the woodpile makes getting WAY back so much easier. Ancestry was the very first rabbit hole I fell into when the internet was young. They got in during the early days in the early 90s.

So interesting to know a little of one's family line. :)