Caturday 26: Catching Rays During the Vortex

It has not been a prime health week for me. I probably wouldn't have posted at all earlier in the week if there hadn't already been a few posts residing in the queue. I don't know what is wrong, and I guess it isn't much, but I am a little off. However, I can do a Caturday blog because it is easy.

Lacey is being Lacey. During the morning, she sleeps on the top of my bureau where, on a good day, she catches a bit of sun. This is the very bureau that we moved under the window, just for her. When the frigid arctic vortex rules, as it has been this week, it does offer sunshine in compensation -- thank heaven for small mercies. 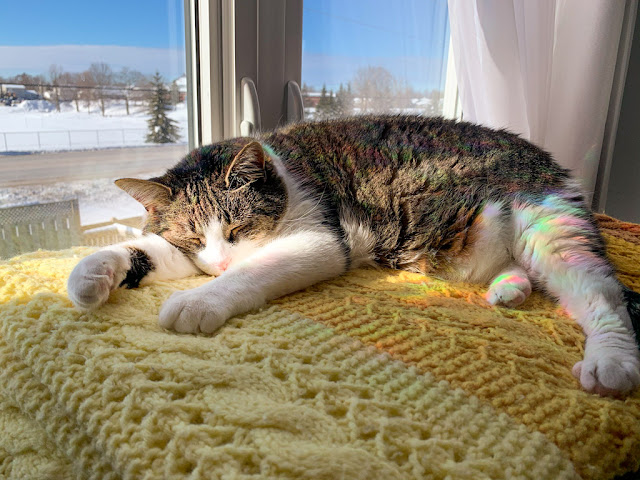 Above, the sun is just catching her obliquely, but by mid afternoon on a sunny day, the rays will move to a point where it casts its light on the bed. So Lacey moves there too. 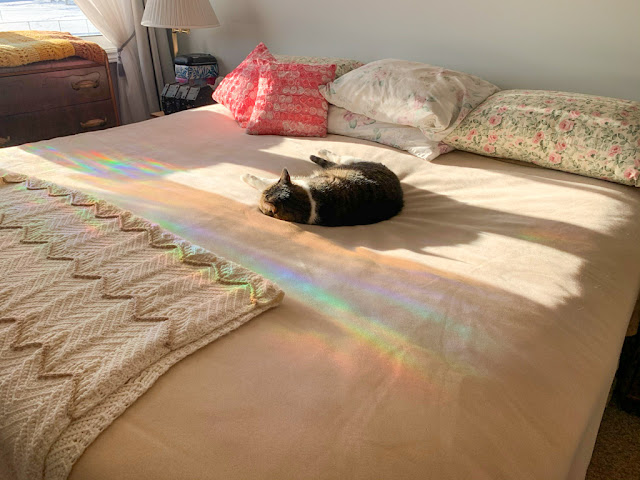 For a brief moment, I feel impelled to disturb her and her pink nose. 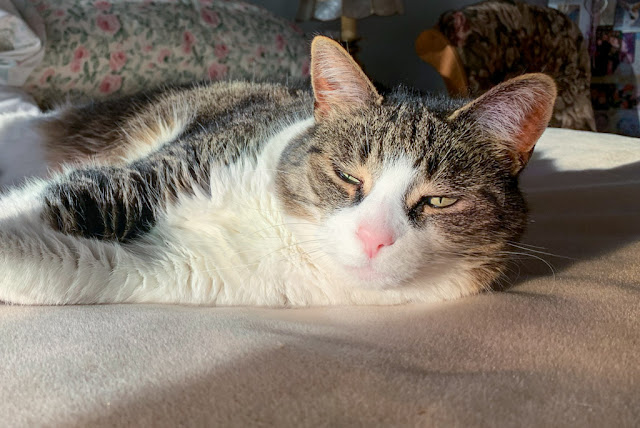 It's a hard life for a cat, having to move to follow the sun and after such an ordeal to then be harassed by a photo jerk.

We should all take a cue from Lacey and learn how to relax and indeed follow the sun. That said, I hope you will be feeling better soon.

I hope that your health issue is one that resolves positively and rapidly!!!! Your cat is so cute!!!
PipeTobacco

Glad to see your post this morning...I missed your daily photos. But then if you're not feeling 100% I understand. Don't force yourself to be creative for us...(but if it's just for fun, that's ok!) Loved seeing your little fur ball in the sun.

I don't own an animal but when my kids visit with their two dogs it's always a "no brainer" to know where they are ... almost always on my bed catching the sun rays ! Hope your "funk" is nothing serious, AC.

Beautiful and colourful kitty! I just stopped in to see how you and yours are doing. I think about you and wonder from time to time. I hope that whatever it is that has you feeling "off" will simply buzz off before too long. Take good care, John.

I hope you get well and find your mojo again. I go through periods of just feeling a bit down that I have always blamed on the lack of sun since they most occur in the winter.

Oh Lacey, you are one very fortunate cat, a blanket all your own on a dresser to keep you in sunshine, while my two must languish upon the carpeted floor for shared sunshine (lol). What a pink nose - perfection.

No fun being sick! Hope you figure out what ails you and can get a remedy soon.
We are enjoying the warm sunshine flooding our south facing windows too. No cat here to enjoy it. One has come at least a couple of times to the slider meowing to be let in. I guess the previous tenants must have let the neighbor's cat in.

Snow in the forecast for Tuesday!

I had that bit of vertigo/nausea that I'm now blaming on something I ate. I'm not sure what it was though, which makes me nervous. Hope you're feeling better soon. I am ALWAYS up for a cat post! As you know, I often write them myself.

Ha! Following the sun is forbidden here in Canada (unless you are a cat)..... all flights to the Caribbean and Mexico sunshine have been cancelled due to that dratted Covid.

Glad to see a post from you - I was worried by the unusual gap. Feel better soon! I, like Lacey, am following the sun today.

She has you well trained.

My cat Willow does the same "follow the sun" routine but she doesn't luxuriate in such prismatic beauty.

It is a hard life. I have one just like her.

I love how vats follow the sun.
I hope you start feeling yourself again soon.

She's so pretty! Love the rainbows on her fur.