An Experiment in Black and White

On a rather nippy morning, I wanted to experiment with my camera, so we took a little walk to the park and trail.

With no great subjects at hand, my experiment was to take shots in b&w straight from the camera. The idea was not just to take them in colour and convert them to mono in post as is usually the case but instead to shoot b&w from the outset the way that I could see them right in the camera.

I not only wanted to see if  I could accomplish this feat but also wondered if actually seeing the world through b&w would help. I am not sure that it did.

A dive into the camera menu system allowed me set the camera up to do that. Each press of the shutter would give me a processed b&w photo and an unprocessed colour photo. But all I could see in the camera was b&w. This is what I wanted for a temporary trial.

Once I got home I decided to process the colour image into mono as I might do normally and then to have always done and then to compare the two versions -- mine and the camera's. My conversion is on the left, the camera's bw on the right. 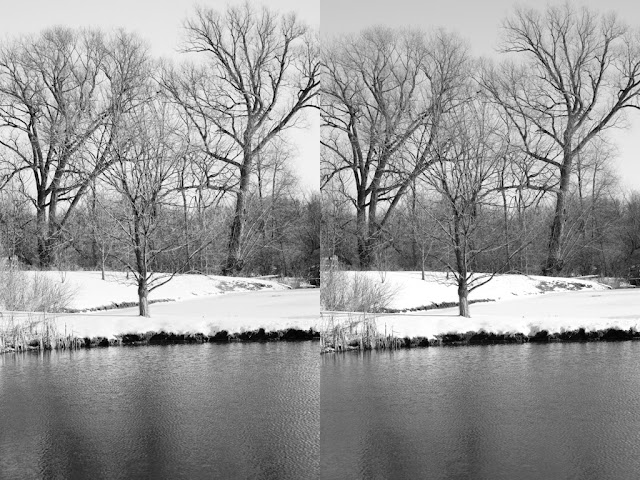 There's not a huge difference. My conversion is slightly more contrasty in the trees; you can see the snow on the branches better. There is also more contrast in the reflections on the pond. Conversely, I have tamed the snow on the bank a little and made it a little less contrasty, but now I am wondering if I should have done that.

Next: my processed fence and grasses are on the top in the next pair. I think my version is brighter and preferable to the camera version. 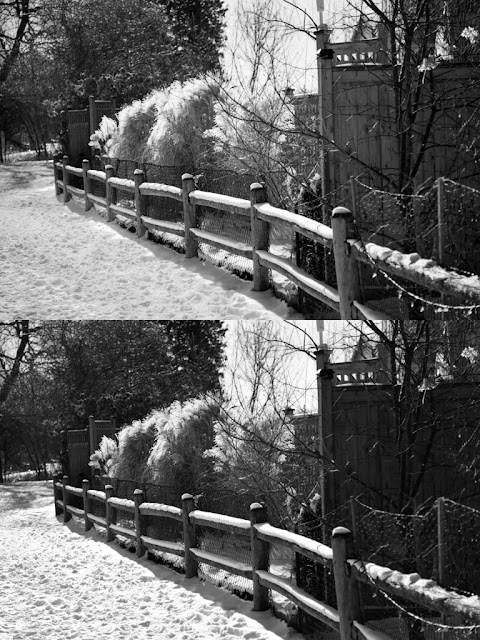 Finally. a close up of some of the same grasses as above.Once again, my processed version from colour is on the top. 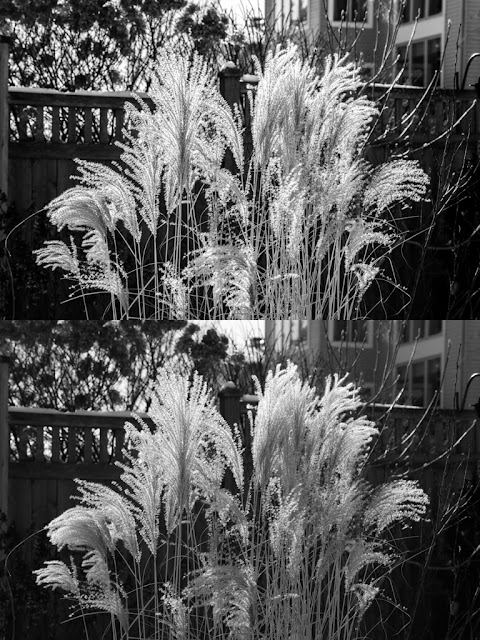 It was an experiment, mostly to see if I could actually figure out how to shoot in b&w. It wasn't so much about comparing versions: not until later anyway.
I am not sure what I accomplished except for actually figuring out how do do it, and also for doing something different on a cold winter morning. Do I think that shooting in b&w helped me to see the composition better if I were to know in advance that I wanted a monochrome photo? Maybe, but I am not sure. But now I know how to go about it if I want to do it again. Assuming that my addled brain can remember how, which is a rather big assumption.

In my younger days I use to do a lot of black and white photography. Back then that meant putting a B&W roll of 35mm film in the camera, shooting it, sending it off to be developed and seeing what you had when it returned.

When I got my first digital camera, I did a similar experiment as you and my thoughts at the time were that though I could see subtle differences, it wasn't worth my time fiddling through the settings. These days I just convert it on the computer if I'm looking for black and white but everything is shot in color.

An interesting experiment. I'm with Ed...that' the way I went through my photography class in college, and ended up with some "arty" B&Ws. I think yours are lovely...comparing them to the changes of a color shot? I think there is softening of the contrasts in the edited versions...but the heavier dark to light version is certainly more dramatic. So we're back to the artist making a choice as to what he/she really wants to depict.

You have such an eye with your photography. I remember taking a course on black & white photography & I never thought of what a challenge it would turn out to be. With all this extra time at home that Doug has encouraged us to take, maybe it's time I also re-look at what my DSLR can do. I think on most all of these photos I like your adjusted of the photo.

It looks like fun to play with the camera. I don’t know enough about mine to play with it. I just like to point and shoot though.

Your versions are lighter and have more contrast. I do like them better. Honestly though, if you hadn't posted them next to each other, I probably wouldn't have noticed the differences.

My son in law has black and white photos adorning his living room walls. He doesn't care much for colorful oil paintings like I do.

Yes, I like your versions better. I lived for a great many years with a professional photographer. He never formally taught me things, but I managed to absorb technique through osmosis.

Interesting. I much prefer the conversions and the contrast.

This looked like it was fun to do. I haven't played with black and white yet. But now you're motivating me.