A Brief Stop at the Feeder

You had to know that it was cold because it was sunny, but out we went for a brief walk on the trail, camera in hand -- naturally. I ported my longest lens, which is a bit of a monster. I have been doing that more lately, partly because it gets me closer to things when my feet may not be able to in winter. Of course, I do sometimes wish that I had a different lens on, but live with my decision, I must.

Yesterday, it came in handy because I was able to use it to photograph the critters which frequent a backyard feeder in a house that backs onto the trail. I have walked by it many times and have just kept going, but since I had my telephoto yesterday . . .

In addition to the birds (soon to come) there are squirrels, and with that abundance of sustenance, they are not skinny squirrels. This one was isolated on the top of a snow pillar, which helps the composition a lot by eliminating distracting detail. 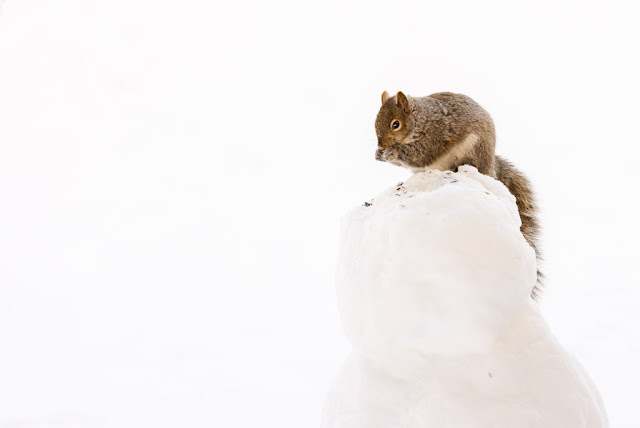 Of course, there were birds. The first one that I photographed was a chickadee. Describing it the first bird, makes it sound like a photographed many birds, but I didn't. 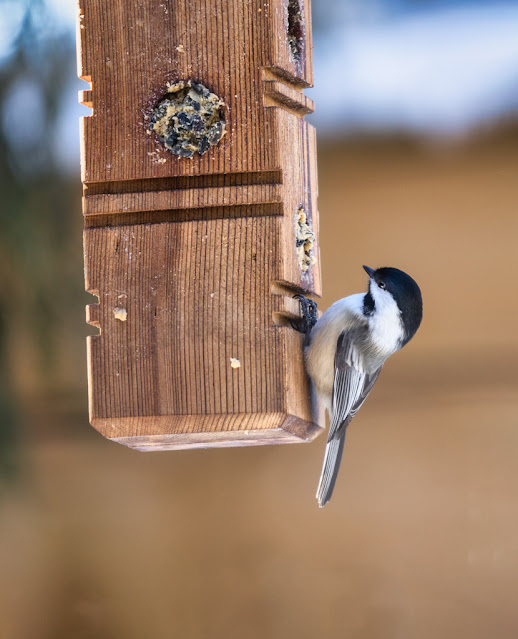 There was at least one bluejay, but as is typical of this species (in my very rudimentary opinion) is that they land, grab a sed, and takeoff in something resembling supersonic speed, One would almost have to know where they are about to land and prefocus in order to get a photo, but it was cold, and I wasn't going to stay for long.
The cardinal was much more obliging, however. He lighted, not even concerning himself to feed for a moment, and looked at me as I looked at him. 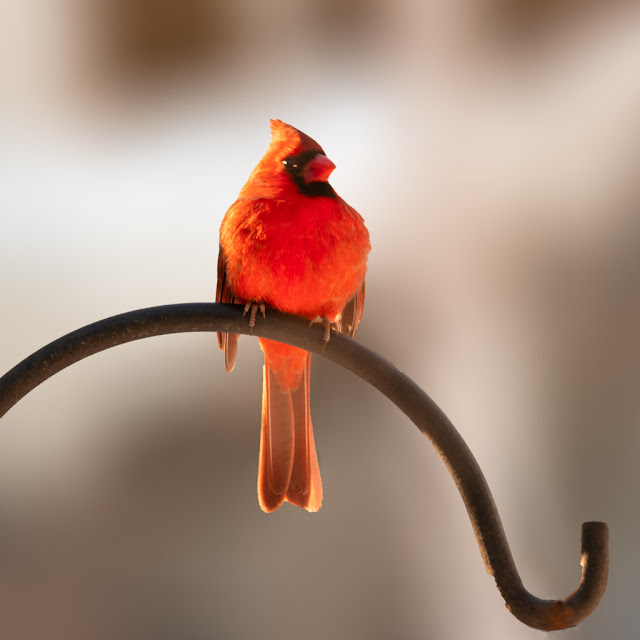 Handholding a 400mm lens at full zoom is not conducive to getting the very sharpest photos, but these are good enough to please a fellow who is not really a wildlife shooter.. 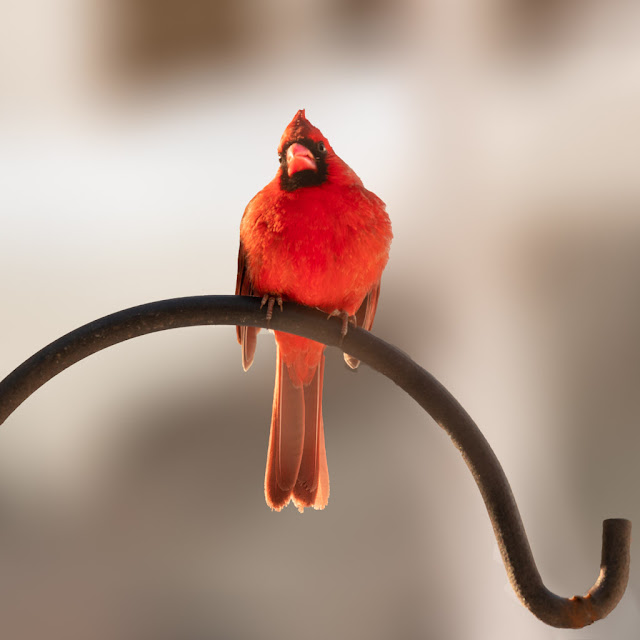 I couldn't and, therefore, didn't stay long. It was near the end of our walk, and I was getting cold. At -7C/19F, my fingers were fairly freezing, so off we went.
While I wasn't shivering on the walk, it took a very long time for my core to warm up, for it was colder than I had thought, and I didn't bundle-up as well as I should have. I am a bad little Canadian, I am.

Posted by Anvilcloud at 6:41 am

It's so healthy getting out and about.
Bird watching is an amazing hobby for that. Well done.

Love the cardinal. I’ve never had the chance to photograph one. Great job.

Nice shots of that cardinal!

Good for you! Squirrel is certainly well done...as are birds. You give of yourself for art!

Great capture on the Cardinal ... and clear enough. I have to rest the long lens on something to get rid of shake and it doesn't always work. The Chickadees flit as well, so you did a good job on that one also. Do you have any fold over mittens? They work for me fairly well. Canadian Tire, if you want some.

That cardinal is so beautiful. I could look at it all day.

Mary. I have photographers gloves. They're decent winter gloves and the finger and thumb pull down, but I was bare for a little too long for such a cold day.

Colder weather is coming according to the forecast I saw today. Those are very nice photos. Like the chickadee best.

But , bad little Canadians have to go out or they end up trapped in their houses.

Haven't heard of those gloves. My Bro-in-law gave me a reusable hot pad to keep in my pocket to warm fingers. I find It is also necessary to keep the camera warm or at least warmish in really cold temps. We should write a how-to book. I get to borrow a photography magazine that discusses equipment for cold but not how to keep hands working.

Love winter birds! Your pics capture them so well.

yes, it is hard to handhold any lon telephoto and especially in the frigid temps you described. Still the bird captures came out very well considering your stated drawbacks...cold fingers would have been my prime reason to stay indoors.

Love that cardinal, although he looks like he's glaring at you in the second photo. Canadians wear jackets in the cold? ;) I never knew.

The cardinal is a very good photo subject.

Oh one must bundle! Especially when one can get photographs like these!!! ;)

I do love the life of birds in the winter. It helps lift the spirits! I used to carry two or three lenses years ago. NOw with a bridge camera, life is easier. Except I really should carry a tripod!

As regards Blue Jays: 1. Buy whole peanuts in the shell from your local bird feed dealer 2. Dress warmly like a good Canadian 3. Go into the woods 4. Hold a peanut in your outstretched hand 5 A Blue Jay will come and take it while others wait their turn, thereby posing for a picture. Easy peasy!

I always got such a kick out of chickadees. For such a small bird, they are amazingly bold. They were the ones that would sit close around me while I filled the bird feeders. Some people hold out a handful of seed and and wait, patiently. After time, the chickadees are what will eat out of your hand. I am curious about your suet feeder though. How do you refill it?

I can't get over your beautiful close-ups. I do especially like chickadees. I don't know why. Maybe it's their shape or coloring.