Upon prompting, you may, perhaps, recall that my original attempt – posted here – to photograph the full moon was thwarted by cloud cover. At the time I did get some alternate sunset photos that saved the outing, but conditions were much better on this next evening. That's good because this was the actual evening of the full moon, which, in July, has been called the Buck Moon or even the Full Buck Moon.

I missed the very earliest of the rising due to the location from which I chose to shoot. At first,  the moon  was obscured behind trees as well as the adjacent overpass by the parking lot. But it was still large and very orange, and when it shifted a little more, I took my ↓ first photo ↓. The treetops were still in the way, but I don't mind the effect. 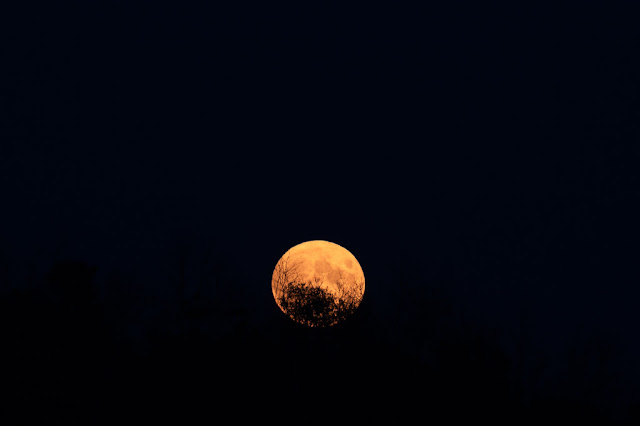 In shooting for the moon, I had to underexpose in order to get the moon to come out right, I did that in the next photo too, but attempted to lift the rest of the scene in editing while keeping the moon to the correct exposure. If you look closely, although I don't know if you can do that at this resolution, there are still a few branches over the bottom of the moon. 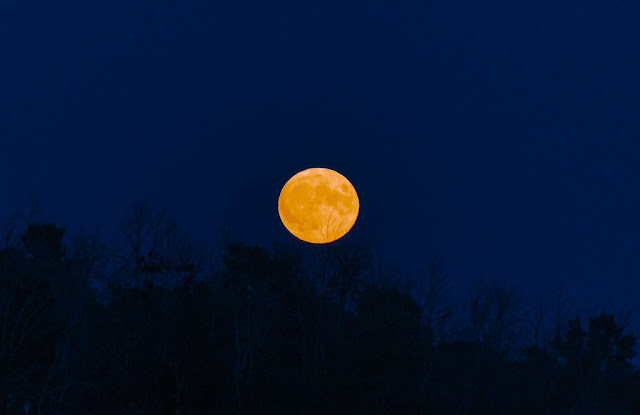 I then decided to do two exposures in camera to blend later in Photoshop: one, darker, for the moon, and the other, lighter, for the scene . I included part of the adjacent overpass and lights for context. While I wish I had a mountain, ocean, lake or even a nice urban location to fill in the scene, this is what I had. For me, it's good to have some context and not just the moon itself. Not everyone shares my opinion, however, and if I were to possess a super zoom lens, maybe I would feel that way too.  While I have a long lens, I can't describe it as a super telephoto. 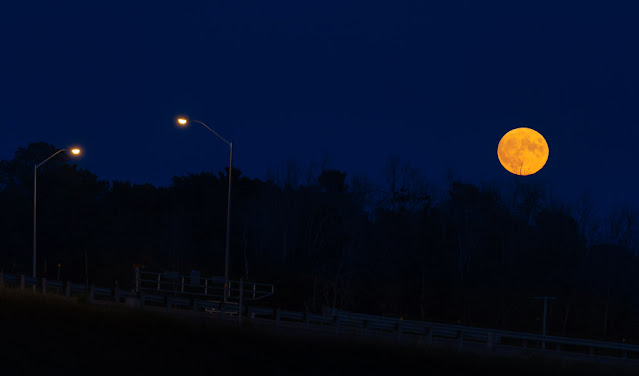 I think this next one turned out best, with more lights from the overpass but not with quite the same mess (ie the overpass railings) of the previous photo. I have been thinking that I could have an even stronger photo if I were to move the moon a bit to the left, perhaps over those two lower lights. But then it wouldn't be authentic, although I doubt if anyone would have known. I would, however. 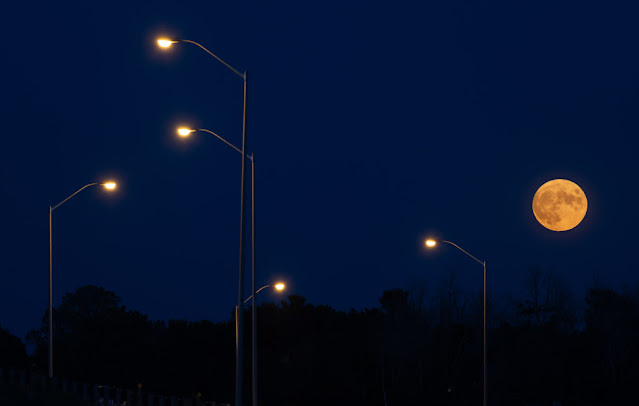 Having exhausted the views from the parking lot. I moved to a different spot, below, with the idea of photographing the moon directly in line with the road. But I discovered that it would have taken a long time to reach that spot, and with the mosquitoes out in such force that I feared of being carried off, I was disinclined to hang about any longer. Also, by the time that the moon were to get there (over the road) it would have been higher and, therefore, even smaller. I'll include a photo that I did take with the moon still off to the left of the overpass, so that you can see what my idea had been. But with the biters on the warpath and the moon getting higher and, therefore, smaller, both my time and my patience expired. 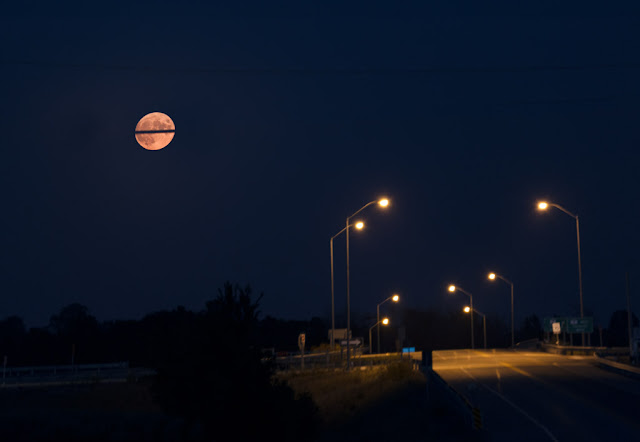 The wire over the moon really helps this photo (kidding), but as I have written, I was too exasperated and uncomfortable to bother finding a better shot.
I am glad that I made the effort. It wasn't the best location, but it had been a bit of a struggle to even find this one. It would also be easier to photograph if it were to rise before it got quite so dark so that there would be less of a difference between the bright moon and the ambient conditions. But that's life – never perfect.

Posted by Anvilcloud at 6:24 am

Despite the mosquitoes, it sounds like an interesting adventure, AC. An evening expedition is nice every now and then.

Friday night we saw the moon rise as we drove home from a local baseball game. The granddaughters were really taken by the color and illusion of size. It was a gorgeous sight. Glad you were able to capture.

I'm cheering for you (Yay you!) for braving the monstrous mosquitoes and achieving the capture of the full moon. Way ahead of me, because we've had clouds and rain the last two evenings...so I haven't even seen the moon. Thanks for posting about your efforts. Sorry about the wire, the last one would have been my fav. otherwise.

The moon was too low on our horizon with the hill behind and all. I did get a bit of a peak between the branches of some large white pines though.

These are incredible photos! You did very well. I've never thought of Canada as having that many mosquitoes. Is it just the time of day/night?

I've seen it the night before last, looking quite grand.

I like the next to last the best, but none of them gave me a sense of ah-ness that many of your photos usually do. Thanks for sharing them, though. :-)

You display good Canadian fortitude in braving the mosquitoes, and the results are quite phenomenal.