You will likely recall that I no longer display my prints after recently taking them down from the hair salon and donating them to the women's interval home. I don't know what has become of them, but that's okay.

Part of the reason has been the degradation of my printer which continues to put down splotches in the margins. I can't sell prints like that.

But I still like to print for myself although I haven't done it very often for about three years. I don't mind a few smudges on a print that is strictly for my own use.

So it was, that I was looking back at PJ's visit last month. I edited a few photos a bit, and then decided to go ahead and print one of me with my two, middle-aged children. 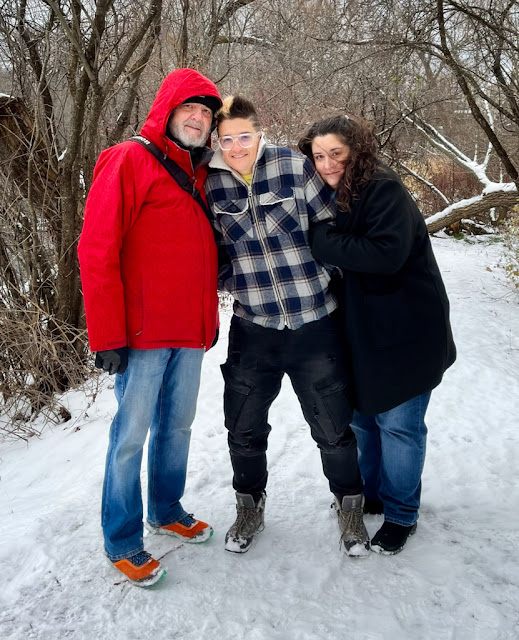 It printed really well for a phone shot. Let me amend that and just say that it printed up very well. As I sometimes do with prints, I held it up and asked Sue to take a picture. 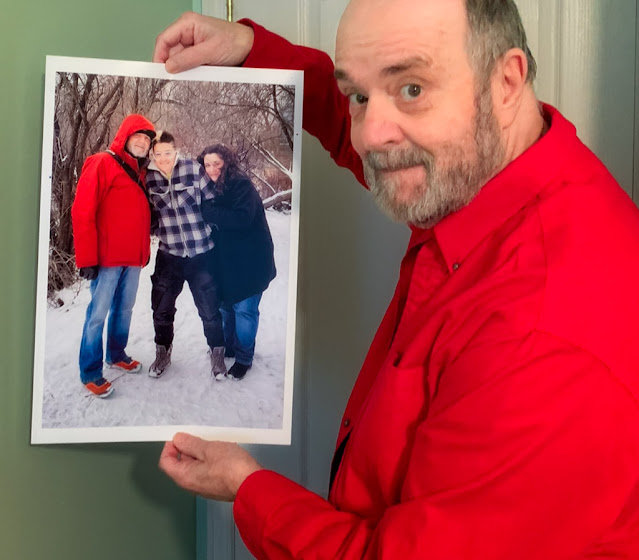 I did that yesterday morning. Last evening, I looked through the folder again and found one of Sue with our kids in the same location. After faffing about with the image for awhile, I decided to also print it as well, but I don't have a photo of me holding it. For one thing, Sue was in bed when I printed it last night, and, for another thing, she's still in bed at the moment. You can see that I signed this one because it is my work from camera to print. The other one was Sue's image; I just did a wee bit of editing and the printing. 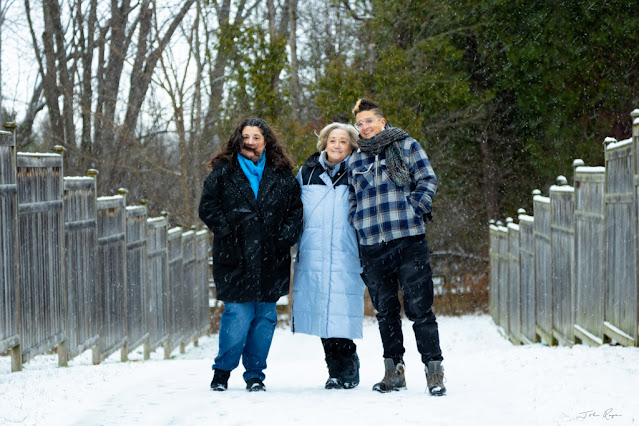 Now I must tell you that I just bought myself a wonderful Christmas gift — a new printer. It was on sale but is still in transit. Meanwhile, I thought I might as well use up some of the ink in the old printer seeing as it costs a small fortune.
Oddly enough, I still don't plan to exhibit or sell my prints, for I have been there and done that and a lowly photographer of my ilk would never sell many anyway. People's walls are pretty well full, so there's not a great demand for photos. Even I, as a photographer of sorts, have neither the desire nor the wall space to purchase prints from the professional photographers that I admire.
But I can and will now, once again, be able to continue to print photos that I like for my own enjoyment, for there is just something about a print that is more satisfying than in viewing an image on screen.
====================
In passing, let me answer Beatrice about how I made collages from my tablet (see previous post). I used a program called PS Express, which has all sorts of collage templates as well as other editing capabilities. She does all of her work on her iPhone and iPad and discovered this program. After playing with the free version for a few months, she purchased the full version for the cost of $50/year. It accesses whatever is already automatically on her camera toll.
Posted by Anvilcloud at 6:03 am

I gave up on printing photos a long time ago. The printers just never seemed to last and as you mentioned, the ink cost a small fortune. It just seemed much easier and cheaper to upload a digital photo to the website of someone else and have it mailed to my door. But I don't print a lot of photos either.

I don't print my photos at home not that it wouldn't be really so much easier as a scrapbooker, but alas the ongoing cost of ink ...

Thanks for the info on the program PS Express, I need to check this out. Maybe Santa will also read this post! Nice photos of both you & Sue with the kids.

Nice to see both of your offspring. Don't think I've seen any photos of PJ before. What was the occasion for the gathering?

Love the photos with both daughters! Keepers for sure!

I only print documents...can't remember when I last printed a photo. Map maybe? Nothing creative like your work! These are super prints of you and Sue and mid-life offspring!

We gave up on having a home printer a few years back and just go to a local store that does a great job, if we have anything we want printing. Love your beautiful shots and family. :-)

@Marcia: there was no special occasion. It was just long past time.

@DJan: many people do this, it I like controlling the process. :)

I love having a printer although I mostly print out cards with my Hallmark program. Those are wonderful family photos! I need to figure out what to do about my grandson collages because Shutterfly no longer has the template I like. (or any template I like)

Good for you for buying a new one. You have to do what gives you joy!

Those prints turned out really well.

I don't recall printing any of my pictures.

I only print for local art fairs in regional shows. Sometimes I print canvas for the home decorations. Other than that, everyone thinks they are better than anyone else these days. Prints do not get appreciated that much these days

I haven't tried to print a photo in a very long time.

I missed in your last post that the people in the photos were your children...middle aged at that.

I used to print my own photos, but I found the ink was getting more and more expensive and would eventually fade. I'm sure they're much better now. I use a laser black and white printer now and send photos to Walmart. CVS does not have a good printer.

Good for your, buying yourself a new printer. Merry Christmas.

I love these photos. Getting all together can be a challenge in these busy adult years and it's fun that you have the three of you (and the two with Sue) in such beautiful pix. Great snowy background, too!

The printout you show seems very,very nice to me. The RED color is very vivid and has depth. I have often found printers, even photo printers seem to sometimes struggle with reds. I am not sure why the printers I have seen used appear to have more difficulty with that, but yours seems great. I hope your new one is even more impressive.

I am also putting here a reply to the comment you left me, because I am not sure if you would see an actual reply to your comment on my site:


“The “conference” as such, was by invitation…. It was not the normal scientific meeting type conference I go to and prefer to present research. Instead, this was a sort of “think tank” grouping of science professors where our task was to develop potential models of how various science disciplines could/potentially should be revamped to better meet student needs in undergraduate college science majors. I was (as would be appropriate) in a group examining biology curricula.

As for Mass…. as a practicing Roman Catholic, it is my duty/responsibility/obligation to attend and participate in Mass at least once a week. And, yet, beyond the “obligation” it also is important/valuable for me in order to maintain a sense of family. On trips of any sort, I always seek and find a Catholic Church so I may attend weekend Mass. it also gives me the opportunity to share in the sacrament of Communion and usually also Confession. Being able to receive those sacraments is important to me as well.“

I should buy a new printer. I print out my Christmas photos every year to send to people, but it's not the best quality.