My goodness! It has been almost exactly two months since my last Caturday post. I know that yesterdays post would have been right for Caturday, but it wasn't Saturday, so it couldn't be Caturday. And it wasn't Lacey either. tsk tsk

It has been eight whole months since I posted about her sneaking into the guest room here. At the time, she was gaining access by knocking Sue's barricade askew. We use the barricade to keep the cat dander out for allergic guests but to allow air circulation in the meantime. 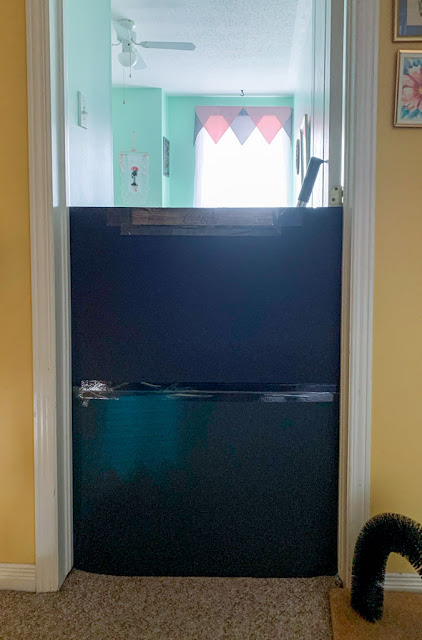 Back then, Sue met the issue by placing a big bag of used clothes on the other side. It served to fortify the barrier and foil dear cat. After the clothes were dispensed through the FB Buy Nothing group, the barricade was no longer as stalwart. However, it sufficed for quite awhile because Lacey had gotten out the the habit of breaking in.
Recently, the day came when her memory kicked in, and therefore, the barrier was also kicked in. Pawed in?
She was discovered, once again with her head buried which probably caused her to feel that no one could, therefore, see her. 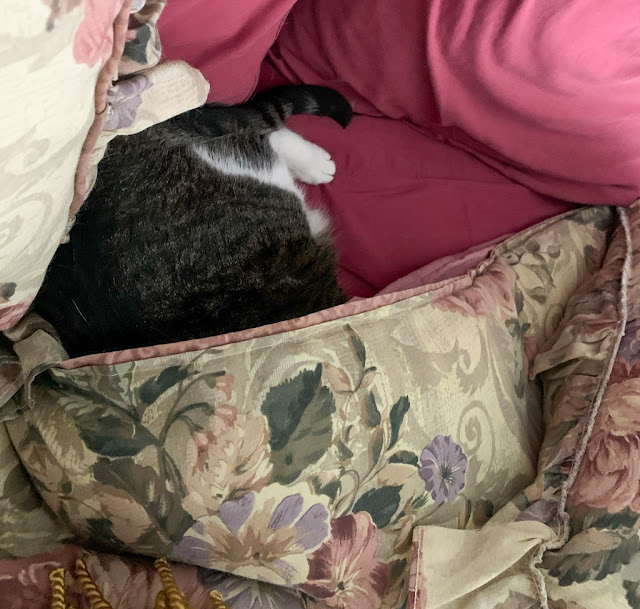 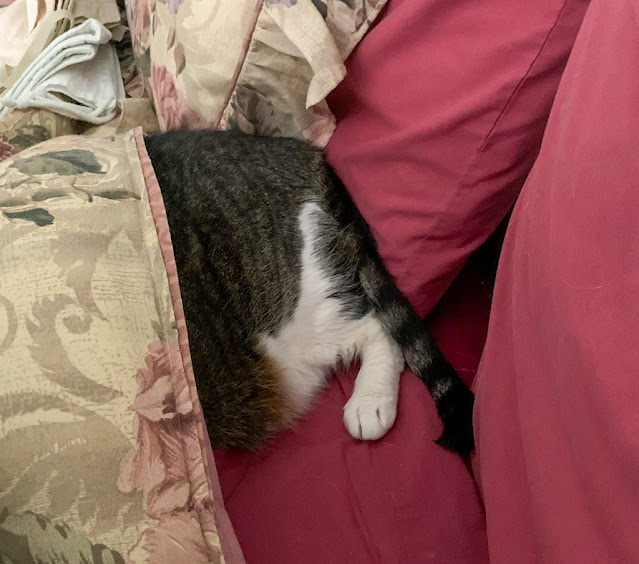 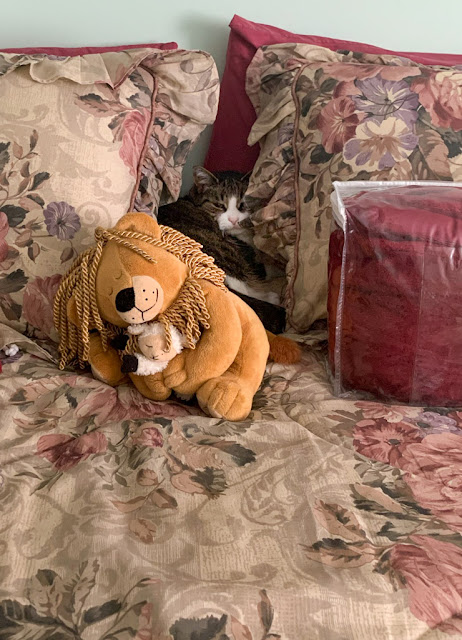 I have used the guest room as my changing room where I also temporarily leave clothes on the bed that I have worn but which don't yet require washing. But now, we've placed the vacuum cleaner to reinforce the barrier, and I have to do my changing and temporary clothes storage in my den.
I tells ya, my life is nothing but hardship. Eh?
Meanwhile . . .  most of the year is either too hot or too cold to enjoy our little closed-in front porch, but we and Lacey have been able to get out a bit recently. June is Pride month, so you might notice that the porch is somewhat decorated, and bear is all dressed too. 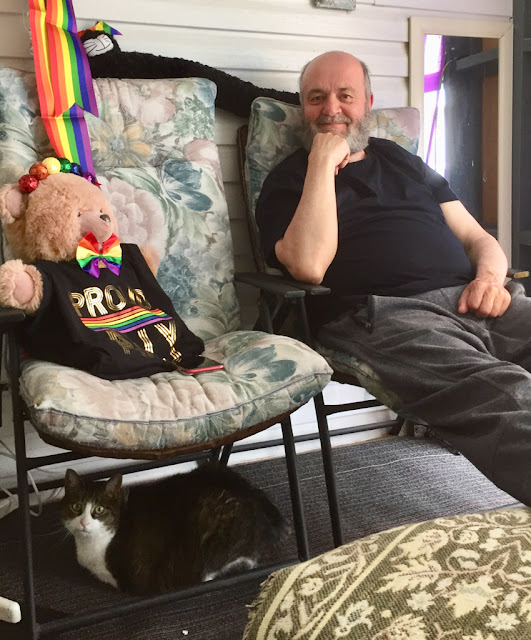 That's too bad that one cat has changed the use of your lives, and part of your actual house so much. But I do remember the days of living with queen cats. I like your Teddy with Pride!

ugh, I need some sort of cat barrier too. We have two elder cats who HATE each other. We have a baby gate up on the loft balcony, but the upstairs cat has discovered she can jump over it. I'm kind of at my wits end.

What a naughty kitten Lacy is. From experience, I don't think cats are easy to train. Can she push open the door? Our cats seem to be able to do that. I would resign myself to the fact that the spare room is hers.

I got in the habit of always locking the door, even when I was at home, as some of the cats had figured out how to open the door. They will keep you on your toes!

Cats are relentless about going where they want to. It's a constant, often losing, battle of wits to stop them.

I would echo Vicki that cats are relentless and also clever about getting what they want. Love the pride bear!!

Proud of your Pride commitment. No point here - no traffic to see it. Although our neighbour two down does have a thanks sign up for front line staff.
You have not lived until the cat gets into the ceiling. We have a drop tile ceiling in the basement and the YD's cat got above it on the open side, walked across and displaced a tile that dropped her onto the spare room bed. She was pleased. We were not. The door to that room was closed and it took us most of the afternoon to figure out what she had done, extract her and fix the ceiling. JG now has cat barriers up.
Cats!!!!!

I have a problem with cat dander. It makes me cough and sneeze, and I am just plain miserable. Which is why I don't own a cat.

Cats can be sneaky. I think you’re right. She figured she couldn’t be seen with her head hidden like that. She’s a smart one.

She is such a cutie.

It's so hard to outwit a cat (at least in my experience)!

LOL! She looks so darn comfy on that bed--ROFL!
Cats--gotta love'em. :)

It’s so funny to see Lacey with her head under the pillow. You’d think that would be uncomfortable.

Maybe you need to install a "Dutch" door where you can close the bottom and leave the top part open. Good luck though, When I had kitties they seemed to be able navigate anything.

Hardship. Indeed!
I find our snakes and goldfish do this, as well. I can't see you , you can't see me!